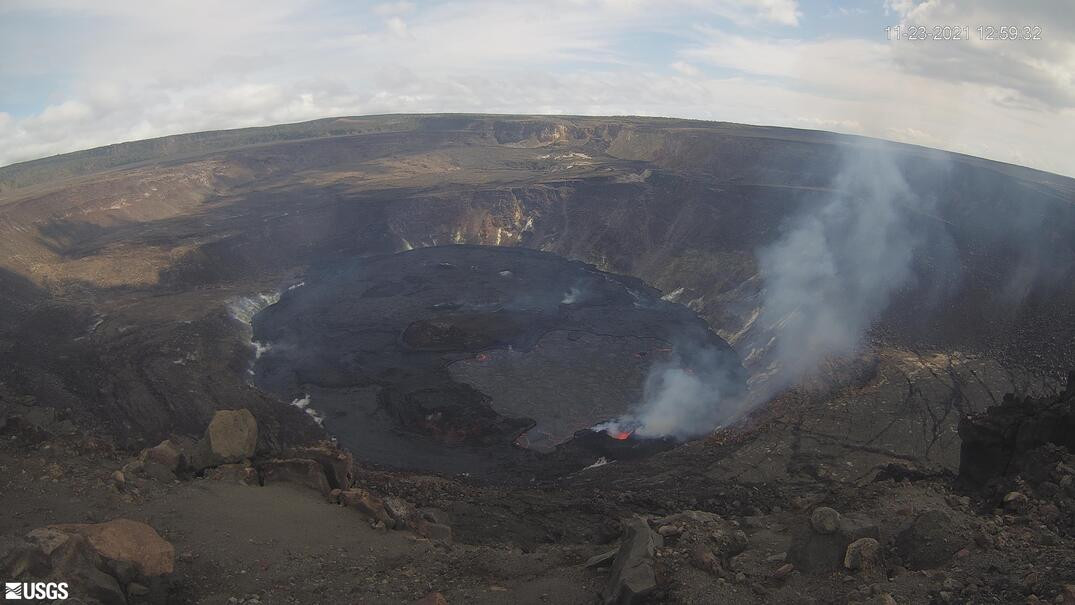 Image from USGS webcam on Tuesday showing Halemaʻumaʻu and the down-dropped caldera floor from the west rim of the new summit collapse features.

HAWAIʻI VOLCANOES NATIONAL PARK - Scientists say there was an increase in lava effusion yesterday that lasted for a few hours, and has since returned to levels consistent with recent activity.

(BIVN) – There was a short-lived increase in lava effusion yesterday, scientists say, as the eruption continues at the summit of Kīlauea volcano.

The USGS Hawaiian Volcano Observatory reported on Tuesday that the lava effusion increase lasted for a few hours and has since returned to levels consistent with recent activity. An uptick in the sulfur dioxide emission rate at the summit was seen at the same time as the effusion increase, measured at approximately 6,000 tonnes per day. In recent weeks, the average SO2 emission rate has been approximately 3000 t/d.

“Summit tiltmeters overall recorded weak deflation over the past day,” the USGS reported. “Seismicity remains stable. Earthquake activity remains below background and volcanic tremor remains elevated since the beginning of the eruption.”

“Lava continues to erupt from a single vent in the western wall of Halemaʻumaʻu crater, while the eastern edge of the lake continues to advance onto the lowest of the exposed down-dropped caldera floor blocks,” the scientists wrote. “Webcams show spatter and ponded lava within the west vent, an area of active lava at the surface of the lava lake, and sporadic oozes of lava along the cooler outer lake margins.”