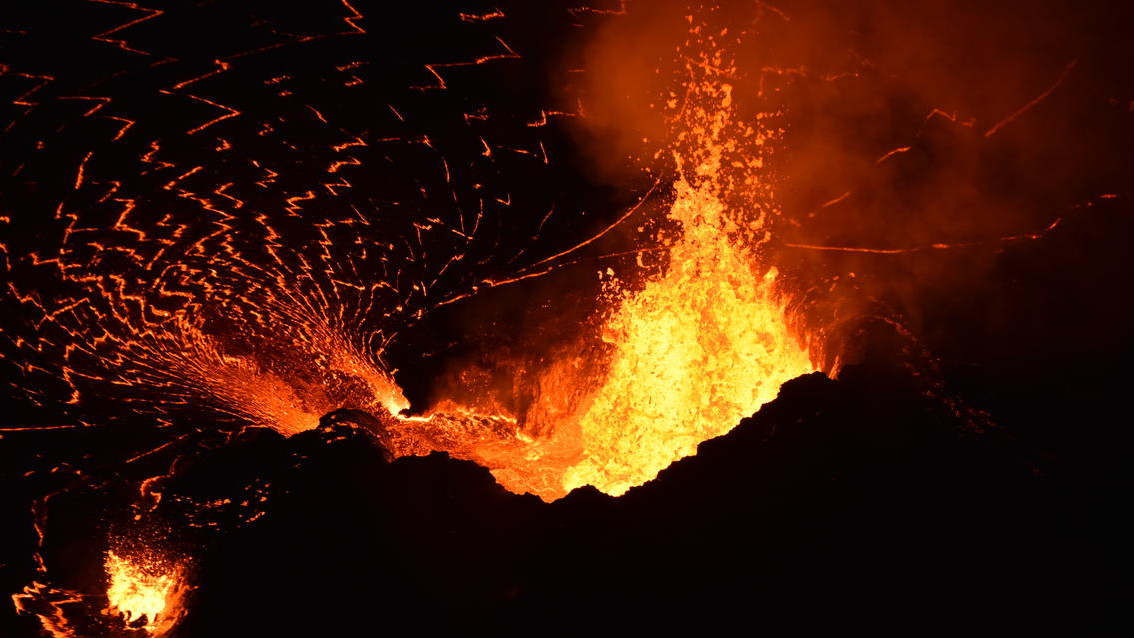 USGS: "Much like New Year's fireworks, incandescent lava fountains in Halema‘uma‘u can be a beautiful display. This photo, taken on October 12, 2021, shows lava from the western vent in Halema‘uma‘u reaching heights of 10–15 meters (30–50 ft) and supplying lava into the lake through a short spillway." (USGS photo by B. Carr)

(BIVN) – Kīlauea Volcano begins the year 2022 in a state of eruption, as the activity at the summit within Halemaʻumaʻu crater continued over the past 24 hours.

January also marks the start of the annual Volcano Awareness Month, which is the subject of the latest Volcano Watch article written by U.S. Geological Survey Hawaiian Volcano Observatory scientists and affiliates.

We traditionally spend the New Year singing “Auld Lang Syne,” a song that reminisces about times long past. For the first month of the New Year, staff at the USGS Hawaiian Volcano Observatory (HVO), and hopefully you too, will reflect on past and ongoing eruptions during the annual Volcano Awareness Month.

Recent summit eruptions of Kīlauea have remained confined to Halema‘uma‘u crater within Hawai‘i Volcanoes National Park. These eruptions, one of which is ongoing, have attracted many volcano-viewers, with stunning displays of eruption glow, lava fountaining, and a lava lake filling in the deepest part of Halema‘uma‘u crater that collapsed in 2018.

While eruptions of Hawai‘i’s volcanoes are beautiful and can often be safely viewed, they also have the ability to directly impact people and commerce on the Island of Hawai‘i. Kīlauea’s 2018 lower East Rift Zone eruption and summit collapse remain fresh on the minds of residents. These were the largest and most destructive events on Kīlauea in at least 200 years and will not soon be forgotten.

January was established as the Island of Hawai‘i’s annual Volcano Awareness Month in 2010 as part of an effort to increase understanding of Hawaiian volcanoes among residents and visitors. Important eruption anniversaries in January include the start of Kīlauea’s long-lived Pu‘u‘ō‘ō eruption on the middle East Rift Zone (1983–2018) and the 1960 Kapoho eruption. Until 2018, these were the two most destructive recent eruptions of Kīlauea.

Mauna Loa hasn’t erupted in over 36 years, but it can never be forgotten because of the potential impact a future large eruption could have.

January also marks the anniversary of Mauna Loa’s 1859 eruption that filled Kīholo Bay and destroyed the village of Wainānāli‘i south of the Waikoloa resorts. A similar eruption today could potentially close both the upper and lower highways in that area (Highways 19 and 190), severely disrupting the Island of Hawai‘i’s economy without destroying a single home.

Repeats of many past Mauna Loa eruptions would not only close roads but threaten communities as well. For example, lava flows crossed Highway 11 and entered the ocean between Miloli‘i and Captain Cook a mere four hours after the 1950 eruption began. Today, houses have replaced ranchlands greatly complicating evacuation planning in this area.

And we should remember that while Hualālai erupts much less frequently than Mauna Loa and Kīlauea, a repeat of the 1800–1801 lava flow that the Kona International Airport sits on would also be highly disruptive.

Past eruptions in Hawaii should encourage us all to increase our volcano awareness, as similar events will occur again in the future. We hope that this year’s Volcano Awareness Month happenings will help you achieve that. HVO, in cooperation with Hawai‘i Volcanoes National Park, Hawaii County Civil Defense Agency, and the University of Hawai‘i at Hilo, work together to promote the importance of understanding and respecting the volcanoes on which we live through this year’s “virtual” Volcano Awareness Month.

Have you ever wondered how the eruption maps that HVO shares on our website are generated? Or what you can learn from olivine—the small green mineral that’s visible in many lava flows? What about how HVO is utilizing the Supplemental funds that it received to support recovery efforts after the 2018 Kīlauea events? 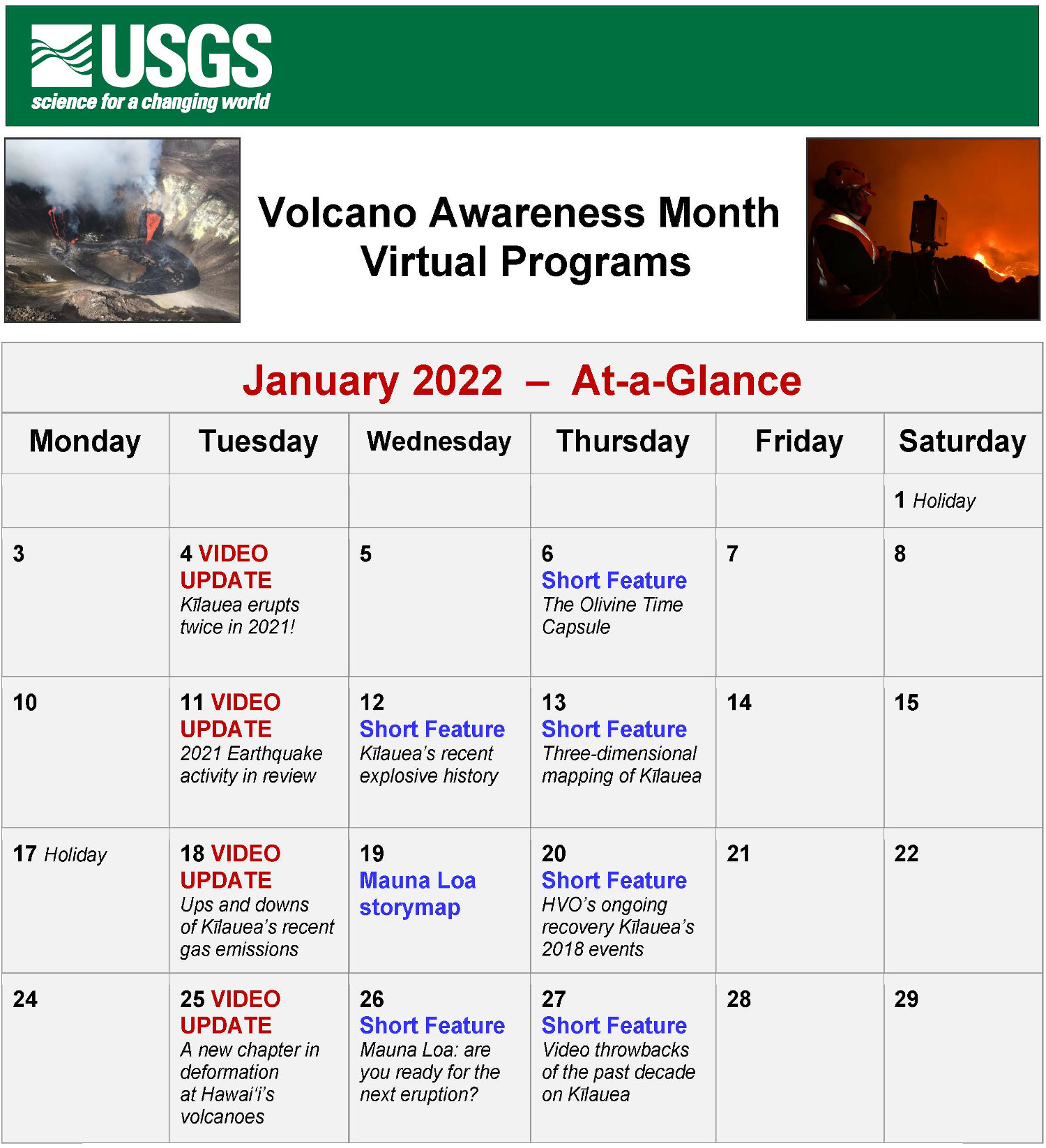 A series of recorded talks by HVO staff will be posted on our website throughout the month of January which will answer these questions and more! Talks will cover Kīlauea’s volcanic year in review and Mauna Loa’s sporadic restlessness and deformation. Other topics include a throwback to some of Kīlauea’s most photogenic activity over the past decade, and a description of the Keanakāko‘i Tephra, which represents Kīlauea’s most recent explosive phase.