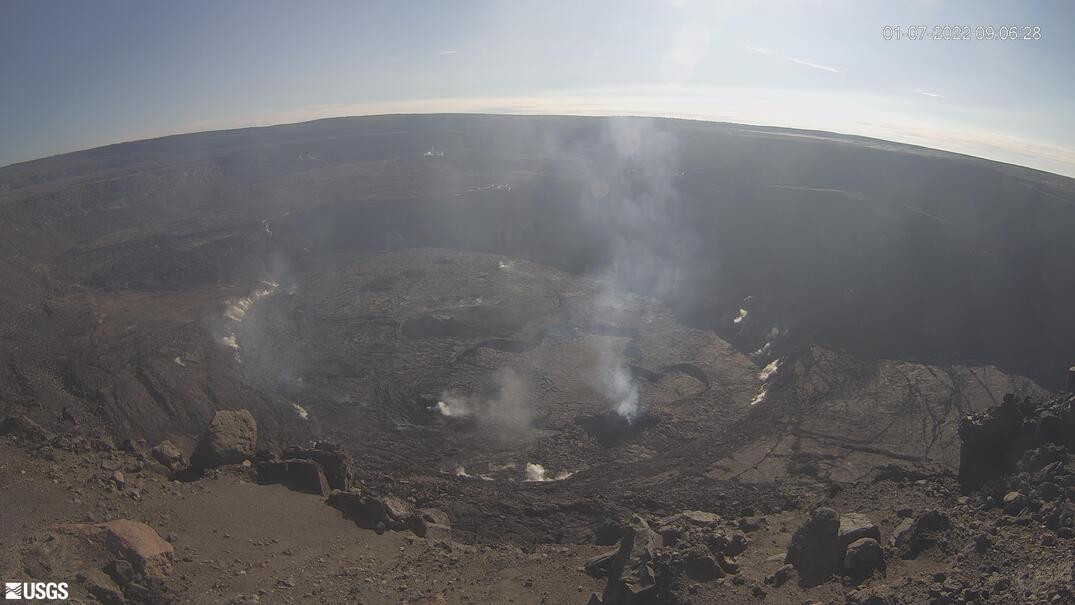 USGS webcam view of Halemaʻumaʻu and the lava lake at the Kilauea summit, captured on January 7, 2022.

HAWAIʻI VOLCANOES NATIONAL PARK - As part of an ongoing pattern, scientists say one these pauses could be the last time we see lava until the next eruption.

(BIVN) – The summit eruption of Kīlauea volcano within Halemaʻumaʻu crater has entered another pause; part of an ongoing on-and-off pattern that could be a sign that the eruption is coming to an end.

The USGS Hawaiian Volcano Observatory reported today that summit tiltmeters began recording rapid deflation at about 1:30 p.m. yesterday, January 6. “The tilt signal has been flat since 10 p.m. last night,” the USGS wrote. “Volcanic tremor associated with the eruption – as recorded by nearby seismometers – decreased around 1:30 p.m. yesterday and remains low.”

All recent lava activity has been confined to the crater, USGS said, and there are no indications of activity migrating elsewhere on Kīlauea.

“We’ve noticed that with the tilt, and the deflation-inflation events, it seems to turn off and come back on and this lasts a day or two,” said HVO geologist Carolyn Parcheta in a recent USGS Volcano Awareness Month video. “Essentially, at the bottom of the DI event, the lava seems to go away for a day or two and then inflation will start and then we’ll see lava come back as the inflation recovers and the pressure recovers.”

“We’re expecting to see this pattern for a little bit, but one of these could be the last time we see lava until the next eruption,” Parcheta said.

No unusual activity has been noted in the Kīlauea East Rift Zone. The current USGS Volcano Alert Level for the volcano is WATCH.