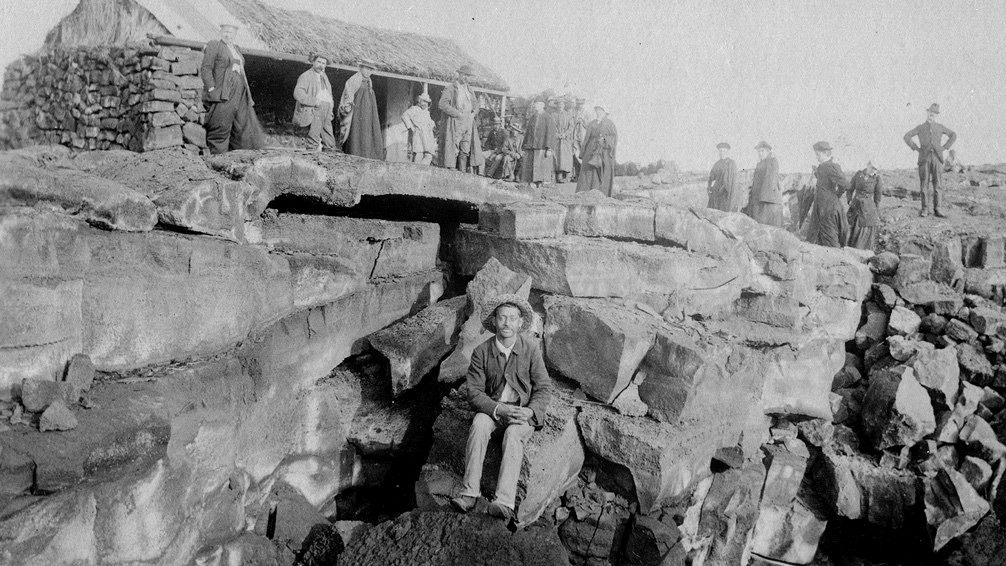 HAWAIʻI VOLCANOES NATIONAL PARK - Alexander Lancaster was known to many as “Pele’s Grandson,” and he guided both tourists and scientists to Hawai‘i’s volcanoes for over forty years, from 1885 to 1928. 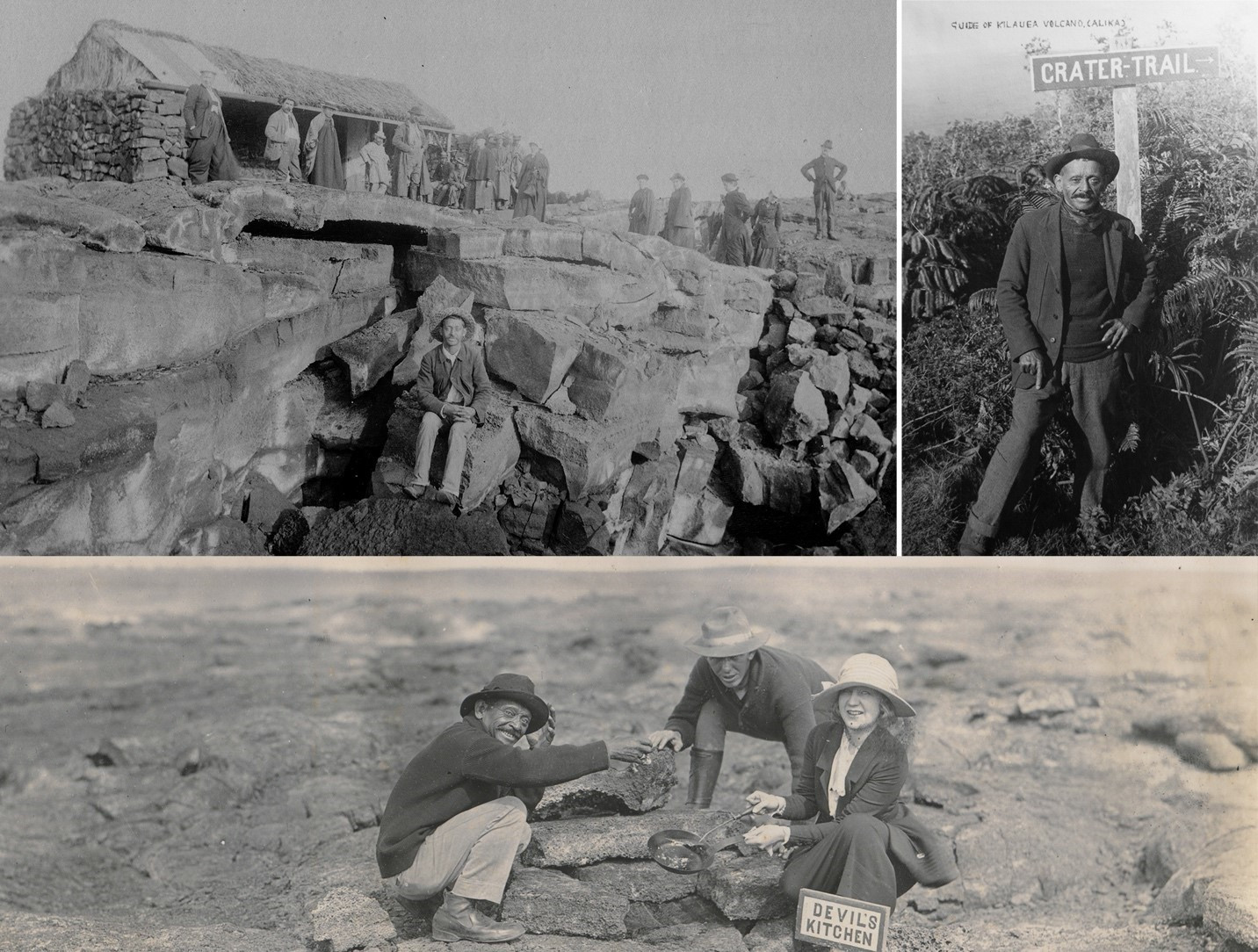 USGS: “Photographs of Alexander (“Alec”) Lancaster, renown guide to visitors of Kīlauea and Mauna Loa, early Hawaiian Volcano Observatory field observer and assistant, and the first Park Ranger of Hawai‘i Volcanoes Park. (Top left) An 1893 photograph of Alex sitting on the bluff below the original visitor’s shelter on the rim of Halema‘uma‘u crater. (Top right) An undated photograph of Alex at Kīlauea’s “Crater Trail,” likely from the 1920s. (Bottom) Alex guiding two visitors to the former “Devil’s Kitchen” area on the floor of Kīlauea caldera in 1924.” (Photographs courtesy of the National Park Service, Hawai‘i Volcanoes National Park and the James Tsuchiya family)

(BIVN) – In this week’s Volcano Watch article, Hawaiian Volcano Observatory research geophysicist Ashton Flinders reflects on the legacy of Alexander Lancaster – aka “Pele’s Grandson” – known for guiding both tourists and scientists to Hawai‘i’s volcanoes for over forty years, from 1885 to 1928.

Alex was born around 1861 and was likely from Virginia, with African American and Cherokee heritage. While it is unclear how and when he arrived in Hawai‘i, by 1881 he had made his way to the island, and in his own words “started watching Kīlauea.”

By 1911 Alex was a well-known guide. In that same year, Dr. Thomas Jaggar, founder of the Hawaiian Volcano Observatory (HVO), sent Frank Perrett to Hawai‘i to establish a volcano observatory at Kīlauea. Alex’s knowledge of the trails and terrain and his first-hand experience made him invaluable to the early observatory.

Alex assisted Perret and Dr. E.S. Shepherd in constructing an iron cable spanning 1200 feet across Halema`uma`u. An electric pyrometer, lowered into the circulating lava lake from this cable, provided the first direct measurement of molten lava temperature—1,010°C (1,850°F)—in the world.

Jaggar recalled, “At all times Alec was a useful camp man, a good cook, and a fearless climber of cliffs. When it came to making and using rope ladders with hickory rungs for descent down a 200-foot cliff to the edge of the lava, Alec was the first to volunteer.”

Alex’s sketches are found throughout the early pages of the Hawaiian Volcano Observatory’s Record Book.

In 1915, when Companies of the 25th US Army regiment came to Hawai‘i to build the Mauna Loa trail, Alex guided them to the more adventurous sights of Kīlauea. Corporal George Schuyler recalled, “…. A half dozen of us dared the descent and stood a few feet from the boiling torrent… Alex warned us when it was time to go because a section of the crater wall was about to crash. We climbed out, and sure enough the section fell with a resounding crash.”

In 1919, the Hawaii Publicity Commission hired Alex to guide visitors to Kīlauea and in 1922, he was hired as the first Park Ranger of the recently established Hawaii National Park.

During the pause between the 1924 and 1927 eruptions of Kīlauea, Alex was commissioned by HVO to provide reports on activity at the volcano.

While small in physical stature, he was 5-foot 1-inch in height and weighed about ninety-five pounds, he was a talkative man with a big personality and described as being “as lively as the volcanoes themselves.”

In 1926, while accompanying a reporter from the Honolulu Advertiser to the paused Kīlauea lava lake, Alex demonstrated his expertise as an acute observer of the volcanoes.

“You see that white spot down there. I call it a dry spot…That white spot is where the next lava flow will break out. I see a blue fume there every now and then, and that means it is firing up below. When it breaks through, there will be several fountains, like red hot water spouting into the air. It will growl and snarl, and sputter—and then it will die down and begin to flow into the crater. That’s the way it has always acted. I see no reason why it should change on this occasion.”

Alex recognized early on many of the phenomena we still discuss today.

During his more than 40 years of observations Alex likely witnessed up to 20 eruptions from Kīlauea and Mauna Loa. His observations between 1885–1911 were particularly important for Jaggar and the new observatory.

In 1924, the long-lived lava lake in Halema‘uma‘u suddenly vanished, followed by a series of more than 50 explosions. Alex recounted “I have never seen an explosion like that one we had here in May, 1924…I have no sympathy with such spells as throwing 14-ton stones up here on the rim.”

Two years later, on April 10, 1926, Mauna Loa erupted, destroying a small village on the coast at Hoʻōpūloa. With Mauna Loa erupting, and everyone wondering whether lava would return to Kīlauea, Alex provided his own insight, “No sir! There’s no mystery about this volcano. When Mauna Loa starts showing off, Kīlauea gets jealous and jumps in with a better show—and that’s what Kīlauea is preparing to do now.”

Alex was one of the key observers documenting the behavior of Kīlauea and Mauna Loa during the beginning of the modern age of volcano monitoring.