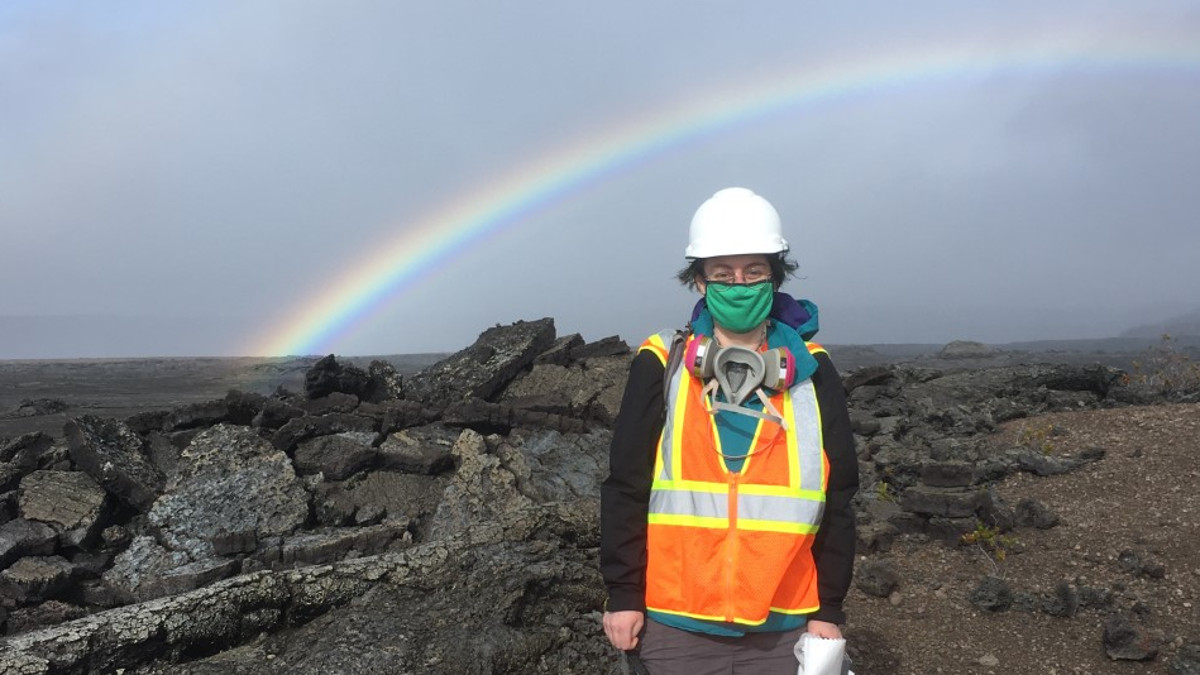 USGS: "Kass Ulmer, Research Corporation of the University of Hawaiʻi seismologist at the Hawaiian Volcano Observatory, deploys a temporary seismometer at Kīlauea summit on 1/1/2021." USGS image by P. Dotray.

HAWAIʻI ISLAND - Scientists reflect on working with University of Hawaiʻi at Hilo, the Center for the Study of Active Volcanoes, and the Research Corporation of UH.

(BIVN) – As the eruption of Kīlauea volcano continues into Friday, scientists are keeping a close eye on the activity, which remains confined to the summit area in Hawaiʻi Volcanoes National Park.

The ongoing monitoring of Kilauea is made possible by a close working relationship between Hawaiʻi institutions, which is the subject of this week’s Volcano Watch article, written by U.S. Geological Survey Hawaiian Volcano Observatory scientists and affiliates. From HVO:

The USGS Hawaiian Volcano Observatory (HVO) is made up of experts with a wide variety of specializations. Seismologists, geodesists, geochemists, geologists, technicians, and support staff all work together to accomplish the same mission: to monitor, research, and assess hazards related to volcanoes and earthquakes in Hawaii.

HVO’s staff is mostly made up of federal employees; however, many critical tasks are handled by staff members affiliated with the University of Hawaiʻi.

Since then, many RCUH employees have played crucial roles at HVO, helping with real-time volcano monitoring, assessing hazards, disseminating information, and conducting research on Hawaiian volcanoes.

Much of this work is done behind the scenes, but the start of Kīlauea’s ongoing summit eruption on September 29 helped shine a spotlight on these RCUH employees as HVO rapidly responded to an eruption that showed very little precursory activity.

Kass Ulmer, a RCUH seismologist, is generally one of the first people at the observatory to spot changes occurring within the volcanoes. They monitor seismic data to look for subtle low-frequency signals, small earthquake migrations, and deep tremor.

The recent Kīlauea eruption was no different. Kass quickly identified complex patterns in seismic activity below Halema‘uma‘u crater that suggested an eruption was imminent. They immediately notified other HVO staff and the decision was made to raise the alert level, notify field crews, and prepare for an eruption.

HVO quickly released information to the public thanks to Katie Mulliken, another RCUH scientist who specializes in public communication. Katie worked closely with others at HVO to raise Kīlauea’s Volcano Alert Level prior to the eruption; she continued to put eruption information on the HVO website after the eruption started to keep Hawaiʻi Volcanoes National Park staff and the public informed. The entire event from first detection to eruption unfolded in less than forty-five minutes.

Real-time monitoring, forecasting and detecting eruptive activity is a major part of HVO’s mission, along with informing the public of changes in activity. But there are other important HVO responsibilities including data collation, documenting activity, and historical analysis that cooperative projects with UHH/CSAV help HVO accomplish.

Miki conducts the majority of Kīlauea’s sulfur dioxide (SO2) emission rate measurements – one of the most critical gas datasets at HVO. Sulfur dioxide emissions inform us about eruption intensity and potential for vog (volcanic air pollution) in communities downwind. Miki also calculates the height of the summit volcanic gas plume from camera imagery and assists with water sampling, gas sampling, and other gas measurement campaigns.

Several RCUH postdoctoral researchers at HVO work on projects related to volcanic ash deposits, volcanic plumes, and lava flow modeling. HVO is also in the process of bringing a ground deformation specialist on board through RCUH. The cooperative agreement has also supported Dr. Cheryl Gansecki and Dr. Steven Lundblad’s real-time geochemistry lab at UHH that played an important role in monitoring the 2018 eruption.

These current RCUH employees are just a small sample of the many RCUH staff that have aided HVO over the years. The dedication and passion that the RCUH employees bring to work every day contributes to HVO’s mission and several RCUH employees have gone on to have careers with the USGS.

Collaborative and cooperative work between USGS and RCUH staff enhances data acquisition, hazard assessments, and information distribution at HVO. At times, this work is difficult and can go unnoticed, but it is vital to volcano and earthquake monitoring in Hawaii. USGS and RCUH staff at HVO, with diverse backgrounds, and specialties, work together to accomplish our mission at the highest possible level.