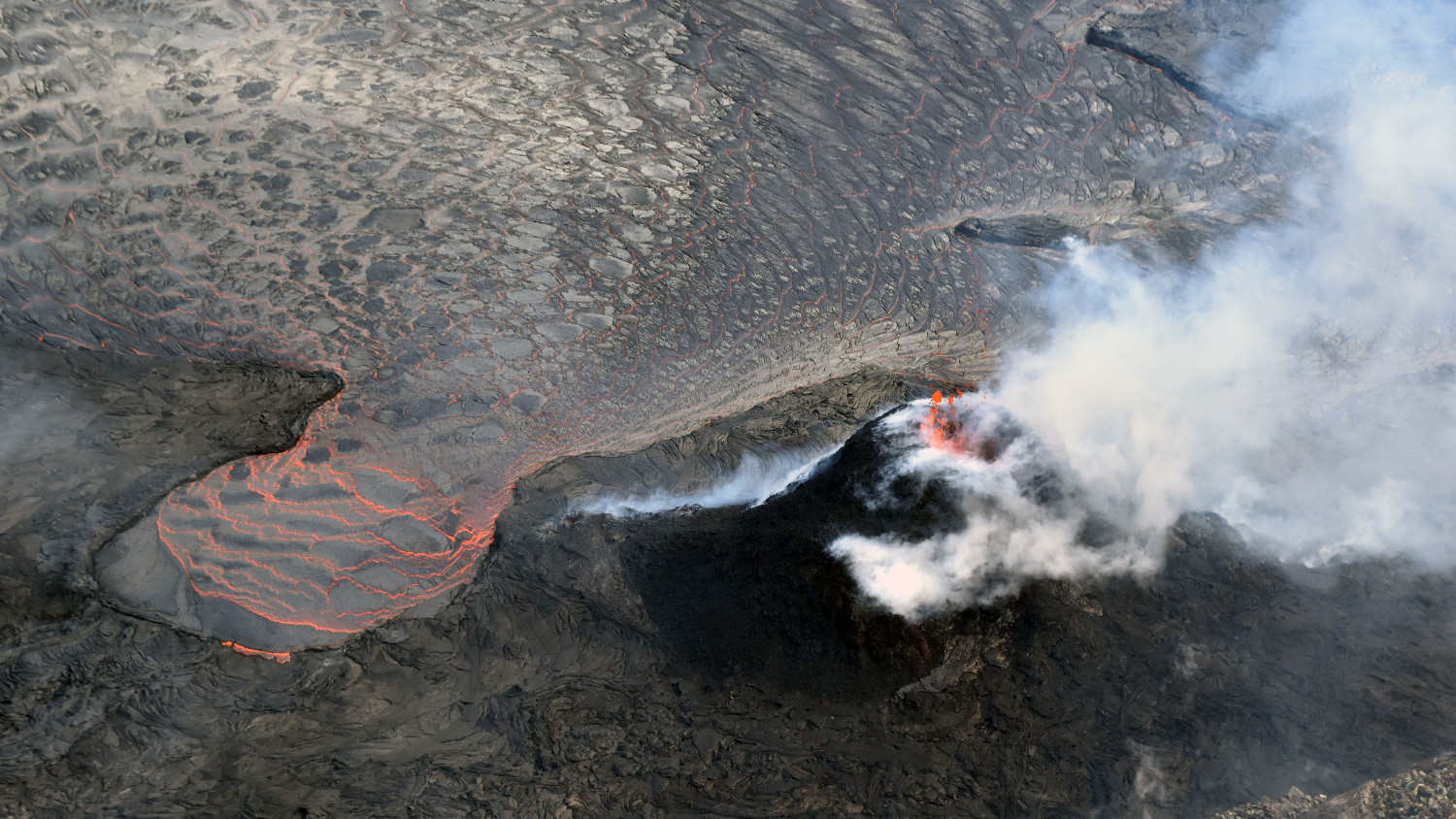 USGS: “A small amount of lava spatter was thrown from the west vent in Halema‘uma‘u crater, at Kīlauea summit, on December 20, 2021. Lava continued to flow into the lake from a source north (left) of the main vent cone. Multiple sources of degassing can be seen on and around the vent cone.” (USGS photo by B. Carr.)

(BIVN) – The eruption at the summit of Kīlauea volcano remains paused today, part of the start-and-stop activity prevalent at the summit in recent weeks. A new video produced by the USGS Hawaiian Volcano Observatory delves into the volcanic gas emissions as they correlate to recent activity. 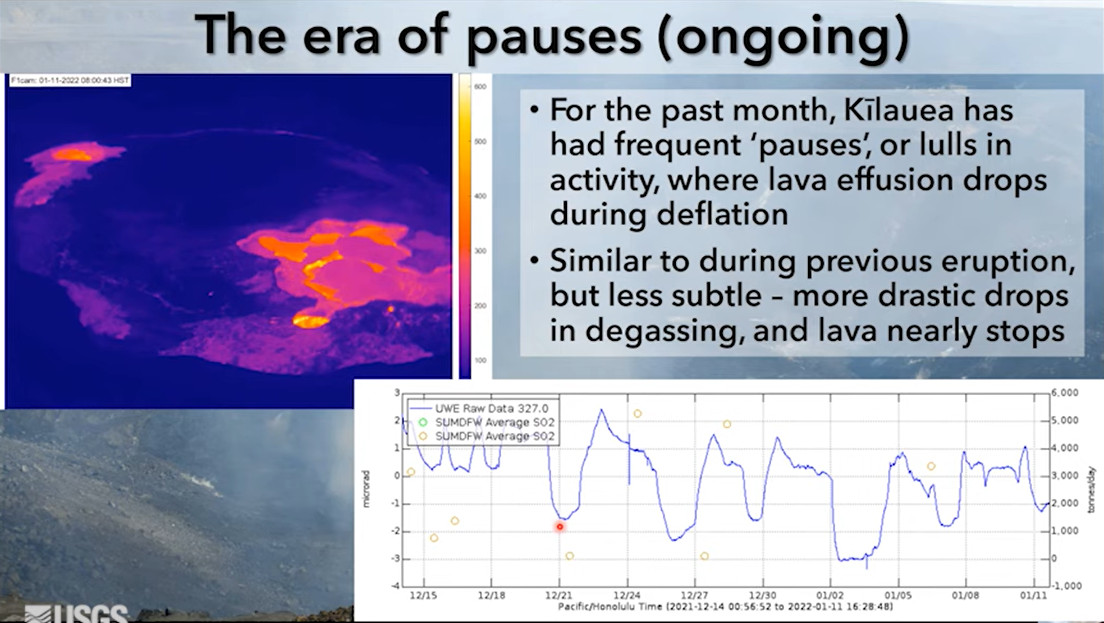 “And what’s happening is it’s linked to that inflation and deflation, again. So the same as the previous eruption with the lava and the gas and the tilt that’s the blue line on this plot, they’re linked. It’s just this eruption is much more drastic. When we have these decreases in tilt, the lava completely slows down and cools over and we have 100 tonnes a day of SO2. Then it surges back and we have thousands of tonnes of SO2 per day with all that lava coming out. So it’s similar to the previous eruption, but just on a bigger scale, bigger variations this time around.”

In the video, Nadeau also explains how these gas emissions lend to the intermittent vog that is seen around the island. 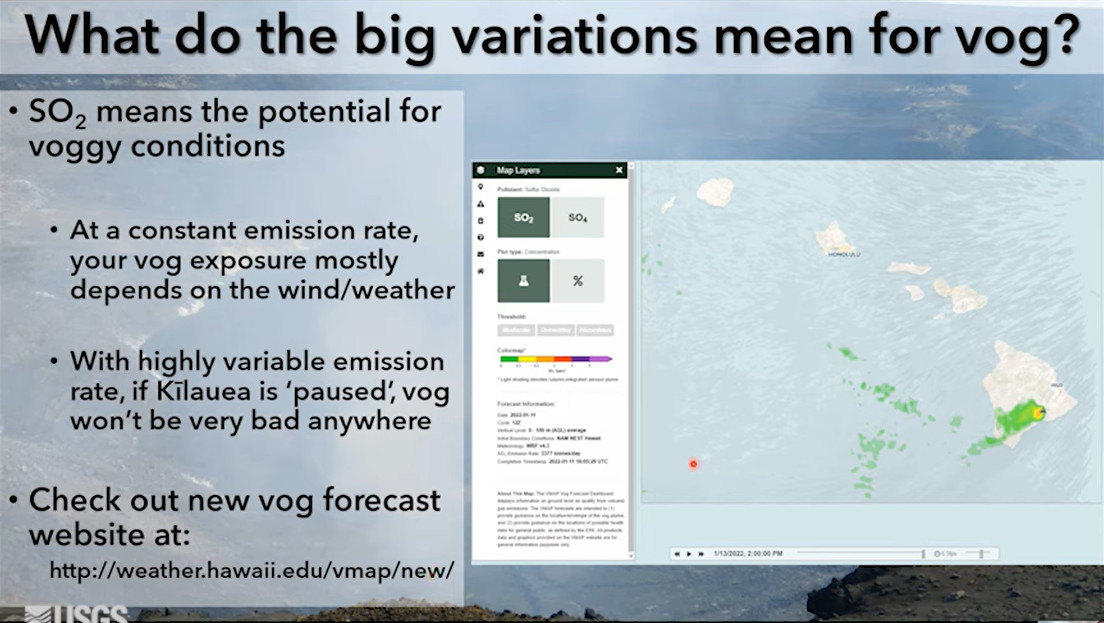 “So if we had a constant emission rate, say it was always 2,000 tonnes a day, whether you get exposed to vog or not depends mostly on whether the wind blows that plume in your direction. But now, with a variable emission rate, there’s another factor in there. Maybe the wind is blowing the plume in your direction, but if you’re lucky, it’ll be when Kīlauea is paused and the emissions are only about 100 tonnes a day, and then the vog won’t be so bad.”

Nadeau says the chemistry of the gas provides insights on what may be going on below the volcanoes surface.

“So one of the main things that we look for in that chemistry is how much carbon dioxide is coming out. If there’s more carbon in the form of carbon dioxide, it means that the magma is coming from deeper within the earth. It’s newer, it’s fresher. It’s coming from down in the mantle, pretty deep. Whereas, if there’s low carbon dioxide, it means that yes, it’s new magma that’s just reaching the surface as lava, but it’s magma that’s sat around within Kīlauea’s magma chamber for a while first and as it sat there, some of that carbon dioxide leaked out over time. So when it finally erupts, a lot of the CO2 is already gone so the erupting gas is less rich in carbon.” 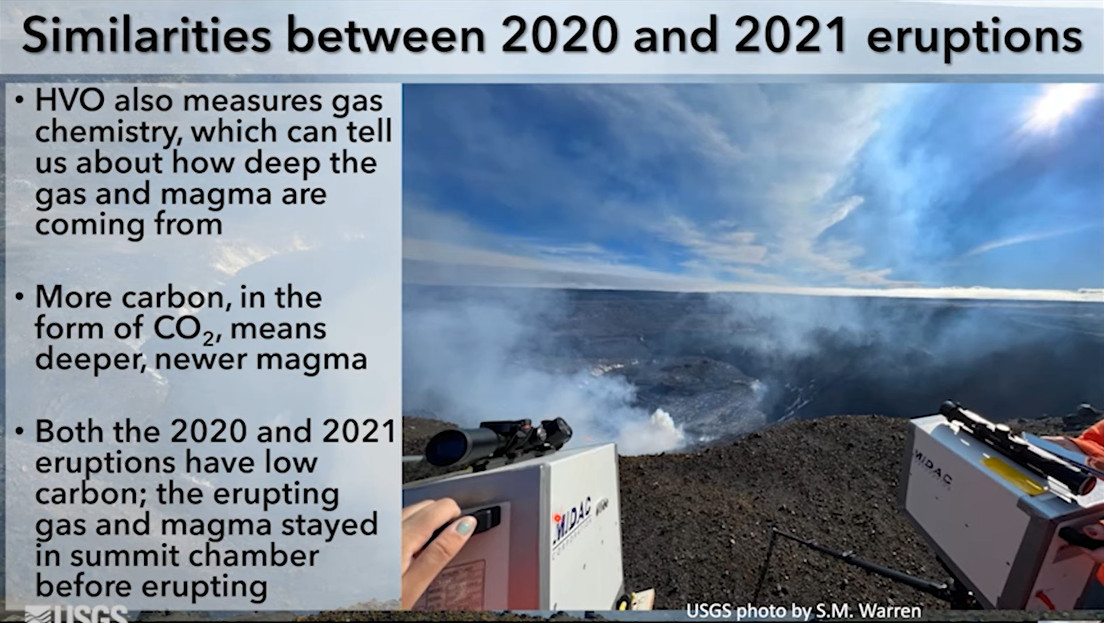 “So what we were seeing in our data from both the 2020 eruption and the 2021 eruption is that they are low in carbon dioxide. So what this means is that for both eruptions, the magma that comes out as lava was actually sitting for a while already. This is not brand new magma from in the mantle.”

The video also gave an update on recent measurements taken on the East Rift Zone, where lava last erupted in 2018. 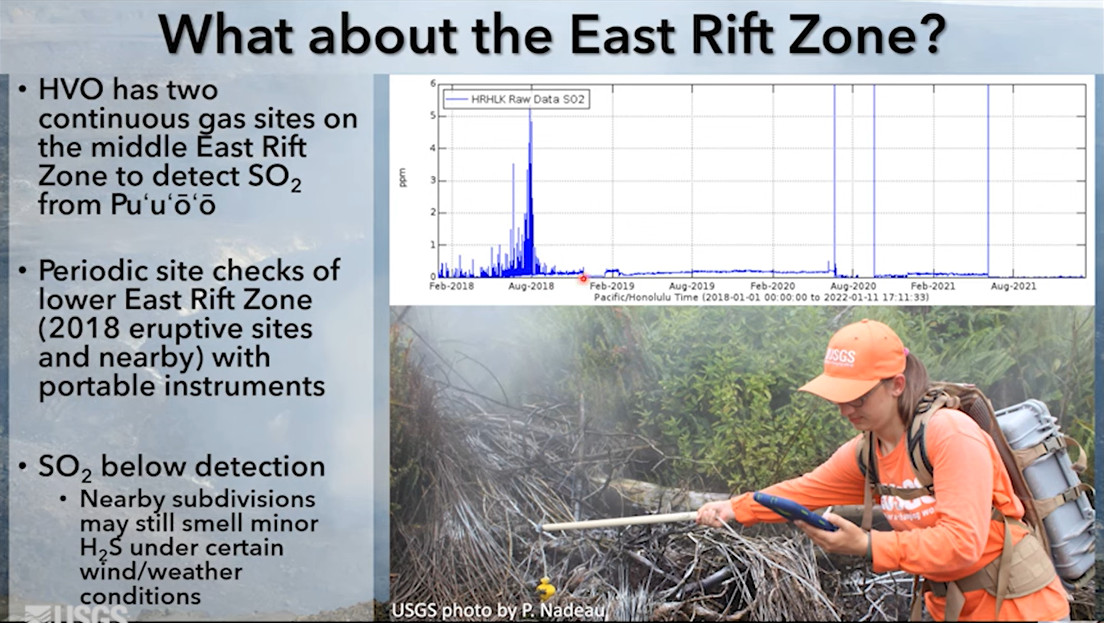 “We’re essentially down at zero. There’s not SO2 that’s detectable coming from Puʻu‘ō‘ō. And for the lower East Rift Zone, we do periodic checks with portable instruments. So this is one of our summer student workers holding, this is the gas sensor on her back and there’s a tube that she can suck in the gas with when she puts it closer to de-gassing site. So we check those periodically at the eruptive sites and other places nearby that were affected by some of the ground heating. And we never detect SO2 there either. So SO2 would be a marker of potential activity and we don’t see it at Pu‘u‘ō‘ō anymore and we don’t see it in the lower East Rift Zone anymore. I know that some people who live in subdivisions near the East Rift Zone sometimes can smell a little bit of a sulfury smell. Generally, that’s going to be probably H2S so that’s hydrogen sulfide. Hydrogen sulfide is the rotten egg smelling sulfur. Whereas, SO2, it’s sharper more like when you strike a match or set off fireworks. So both of those sites, the lower East Rift Zone and Pu‘u‘ō‘ō do still produce minor amounts of that hydrogen sulfide, the H2S, and under certain wind and weather conditions, you may get a little bit of that drifting into nearby population centers and subdivisions. So if you smell a little bit of that, it’s actually because human noses are even more sensitive to that hydrogen sulfide than we are to SO2. So even though there’s just a tiny, tiny amount of H2S coming out of places like Pu‘u‘ō‘ō, if it blows your way, you might smell it, but it doesn’t mean that anything is necessarily going on with an eruption, because like I said, we’re not seeing any SO2 and it’s SO2 that’s related to eruptions.”

In today’s Kilauea update, the USGS reported the summit began re-inflating at about 6 p.m. Monday, and added that “at the current rate of inflation, it is possible that the eruption could restart within the next 24-48 hours.”