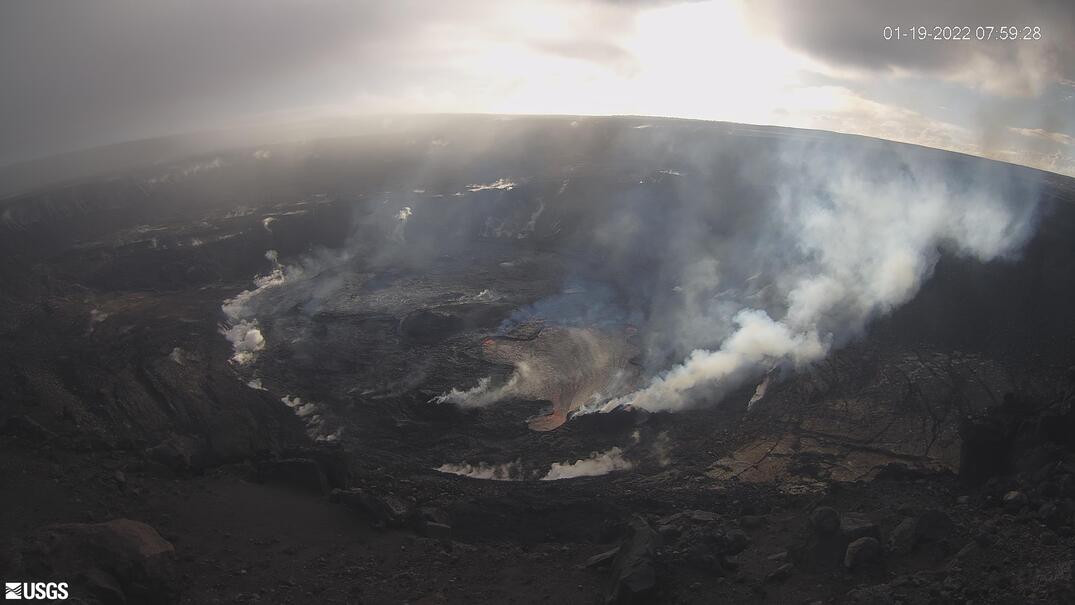 (BIVN) – After a pause in activity that lasted for multiple days, the summit eruption of Kīlauea volcano resumed at approximately 10:45 a.m. HST on Tuesday, January 18.

The activity continues the on-again-off again eruptive pattern within Halemaʻumaʻu crater. All lava activity is confined to the crater, and scientists say there are no indications of activity migrating elsewhere on Kīlauea.

From the USGS Hawaiian Volcano Observatory on Wednesday:

Summit Observations: Kīlaueaʻs summit eruption resumed began re-inflating at about 10:45 a.m. HST yesterday, January 18, following a multiday pause. Lava reappeared after approximately 17 hours of inflation and 25 minutes of increased tremor. The most recent sulfur dioxide (SO2) emission rate of approximately 300 tonnes per day (t/d) was measured on January 11 during the eruption pause, while a rate of approximately 3,300 t/d was measured on the morning of January 6 when the lava lake was active.

Halemaʻumaʻu Lava Lake Observations: Lava returned to the western vent within Halemaʻumaʻu crater at about 10:45 a.m. HST yesterday, January 18. By 4:30 p.m. HST yesterday, the lava lake level had increased by approximately 12 meters (39 feet), recovering and slightly surpassing the lake’s peak level recorded on January 12. The lava lake level has been slowly decreasing since approximately 5 p.m. HST yesterday, following decreases in summit tilt. The surface of the lava lake remains active in the western side of the crater. The lake has seen a total rise of about 83 meters (272 feet) since lava emerged on September 29, 2021. Measurements on December 30, 2021, indicated that the total lava volume effused since the beginning of the eruption was approximately 40 million cubic meters (10.5 billion gallons) at that time.

Hazard Analysis: This eruption at Kīlauea’s summit is occurring within a closed area of Hawaiʻi Volcanoes National Park. Therefore, high levels of volcanic gas are the primary hazard of concern, as this hazard can have far-reaching effects downwind. Large amounts of volcanic gas – primarily water vapor (H2O), carbon dioxide (CO2), and sulfur dioxide (SO2) – are continuously released during eruptions of Kīlauea volcano. As SO2 is released from the summit, it reacts in the atmosphere to create the visible haze known as vog (volcanic smog) that has been observed downwind of Kīlauea. Vog creates the potential for airborne health hazards to residents and visitors, damages agricultural crops and other plants, and affects livestock.