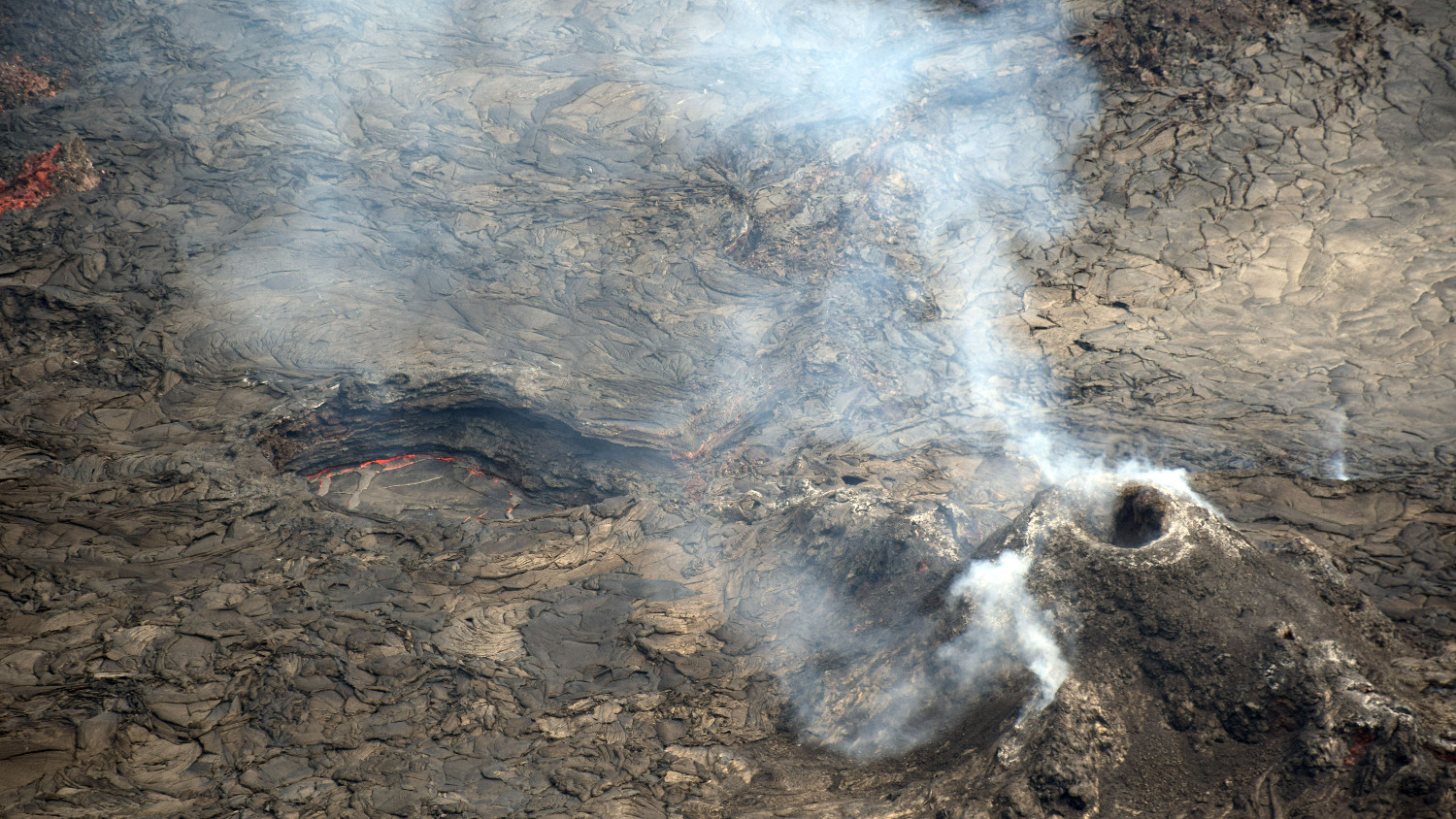 USGS: "A telephoto view of the west vent and lava pond within Halema‘uma‘u crater, at Kīlauea summit. On January 28, HVO field crews only observed active lava within the small lava pond to the north (upper left) of the west vent (lower right). A diffuse volcanic gas plume was being emitted from the west vent." (USGS photo taken by L. DeSmither from the western rim of the crater)

HAWAIʻI VOLCANOES NATIONAL PARK - The eruption - which today reaches the four-month mark - remains essentially paused, though some active lava may remain visible at the surface. 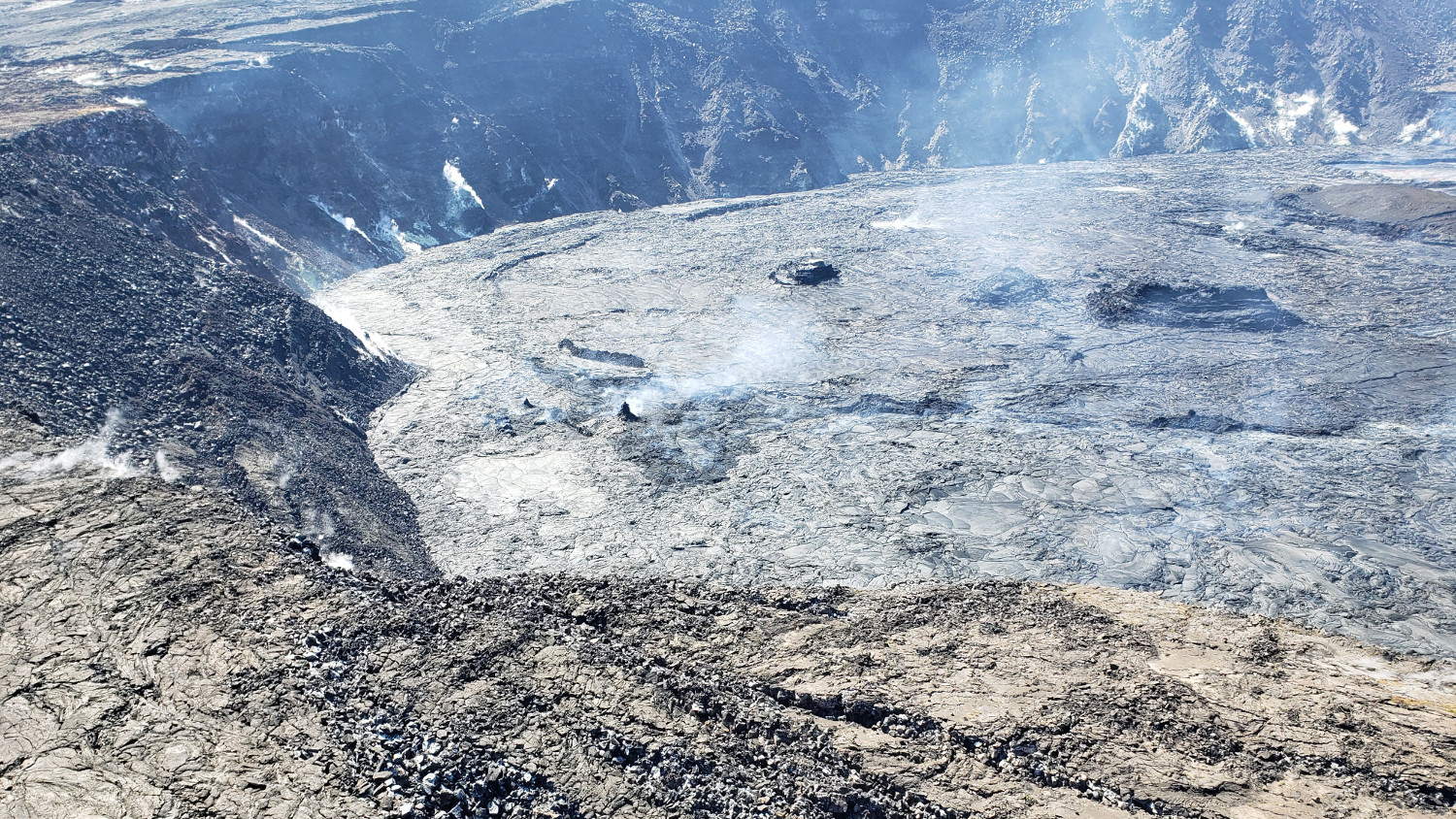 USGS: “On January 27, HVO scientists surveyed parts of the downdropped block in Kīlauea’s summit caldera, north of Halema‘uma‘u crater, for an area to deploy a new continuous gravity instrument funded through the Additional Supplemental Appropriations for Disaster Relief Act of 2019 (H.R. 2157) to support recovery and rebuilding activities in the wake of Kīlauea’s 2018 events. As the scientists were on the ground, they noted gas-jetting sounds being emitted by a small and steep spatter cone that has developed on the inactive lava lake surface in the eastern portion of Halema‘uma‘u. The spatter cone is visible near the center of this photo, which was taken from the north rim of Halema‘uma‘u and looks to the southeast.” (USGS photo by I. Johanson)

(BIVN) – As the most recent eruption of Kīlauea volcano reaches the four-month mark, the off-and-on pattern of activity continues at the summit.

As of Saturday morning, scientists said the eruption at the summit of Kīlauea remains essentially paused, “though a small amount of active lava may remain visible at the surface.”

As of 8 a.m. HST this morning, no active lava is visible in Halema‘uma‘u crater. Over the past 24 hours, active lava was visible in the west vent cone and the small pond north of the west vent cone, within Halema‘uma‘u crater. A small lava flow along the north margin of the crater was occasionally active over the past day. Field crews working within Kīlauea caldera yesterday noted that loud gas-jetting sounds continued from the small and steep spatter cone in the eastern section of Halema‘uma‘u. The lava lake depth has very gradually decreased less than one meter (3 ft) over the past 24 hours. At approximately 8 a.m. this morning, the lava lake depth was 77 meters (253 feet) deep relative to when lava emerged on September 29, 2021. Measurements on January 25, 2022, indicated that the total lava volume effused since the beginning of the eruption was approximately 45 million cubic meters (12.0 billion gallons) at that time.

HVO says summit tiltmeters “recorded very little ground deformation over the past 24 hours.” Volcanic tremor, which scientists say is associated with the eruption of lava at the west vent, “is at almost non-eruptive levels, which correlates with very little lava activity at the west vent.”

No unusual activity has been noted in the East Rift Zone. Since the start of the eruption four months ago, all activity has been confined to the summit crater within Hawaiʻi Volcanoes National Park, and there are no indications of activity migrating elsewhere on Kīlauea.