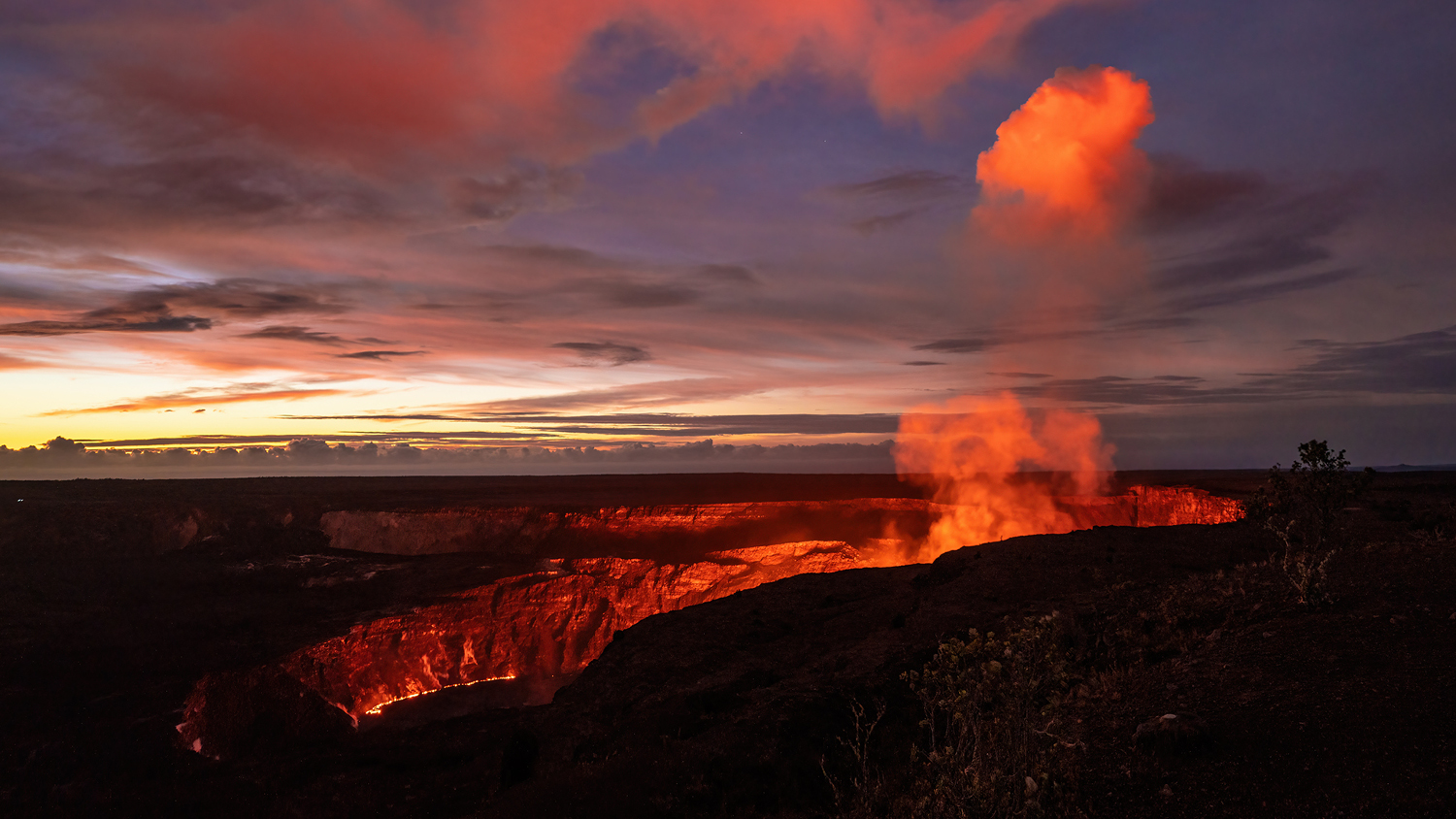 The glow at Halemaʻumaʻu (NPS photo by Janice Wei)

(BIVN) – As of Saturday morning, the four-month eruption of Kilauea volcano continued at the summit. “Effusion of lava from the western vent within Halemaʻumaʻu crater has continued with slight fluctuations over the past 24 hours,” the latest update from the USGS Hawaiian Volcano Observatory reported.

In this week’s Volcano Watch article, USGS HVO scientists and affiliates examine the latest activity, and how it affects the glow seen from the Kilauea summit crater.

Kīlauea’s summit glow comes and goes frequently these days. This is due to a pattern of pauses in lava lake activity within Halema‘uma‘u crater over the last two and a half months. Cycles last several days to a week and consist of a couple days of visible lava lake activity, followed by one to three days without lava.

HVO is monitoring four main data streams to help us understand why Kīlauea is exhibiting this behavior.

Tilt data records ground deformation of the volcano and is thought to reflect the pressurization level of Kīlauea’s shallow summit magma chamber. Kīlauea’s summit region has remained relatively flat since mid-October, but superimposed on the flat signal are small, pronounced deflation/inflation events. This is the first monitoring signal to show change when the cycle is beginning.

On November 7, 2021, Kīlauea summit tilt started showing larger deflation-inflation events (DI) than were seen in the previous month. At the bottom of each of these deflation cycles the lava drained from the vent and active lava lake, though it occasionally bubbled within an embayment immediately north of the west vent in Halema‘uma‘u.

But lava is not gone for good when this happens, nor has it gone far. It sits just below the surface, far enough out of sight that the glow disappears, but close enough to reemerge at the end of the cycle. The tilt needs to “recover” the amount of deflation that stopped the glow (plus a little extra). Magma builds up pressure to reestablish the pathway to the surface and reappears near the top of the inflation cycle.

Volcanic tremor, measured by seismometers, provides another set of clues. At the start of the deflationary trend the seismic tremor drops abruptly to very low levels. Tremor indicates that magma and gas are moving at very shallow levels in the volcano. When that signal dies off, we can infer that the magma is no longer trying to erupt. Tremor does not restart until near the top of the inflationary cycle, but once it does, lava reappears inside the west vent within 10 to 30 minutes. 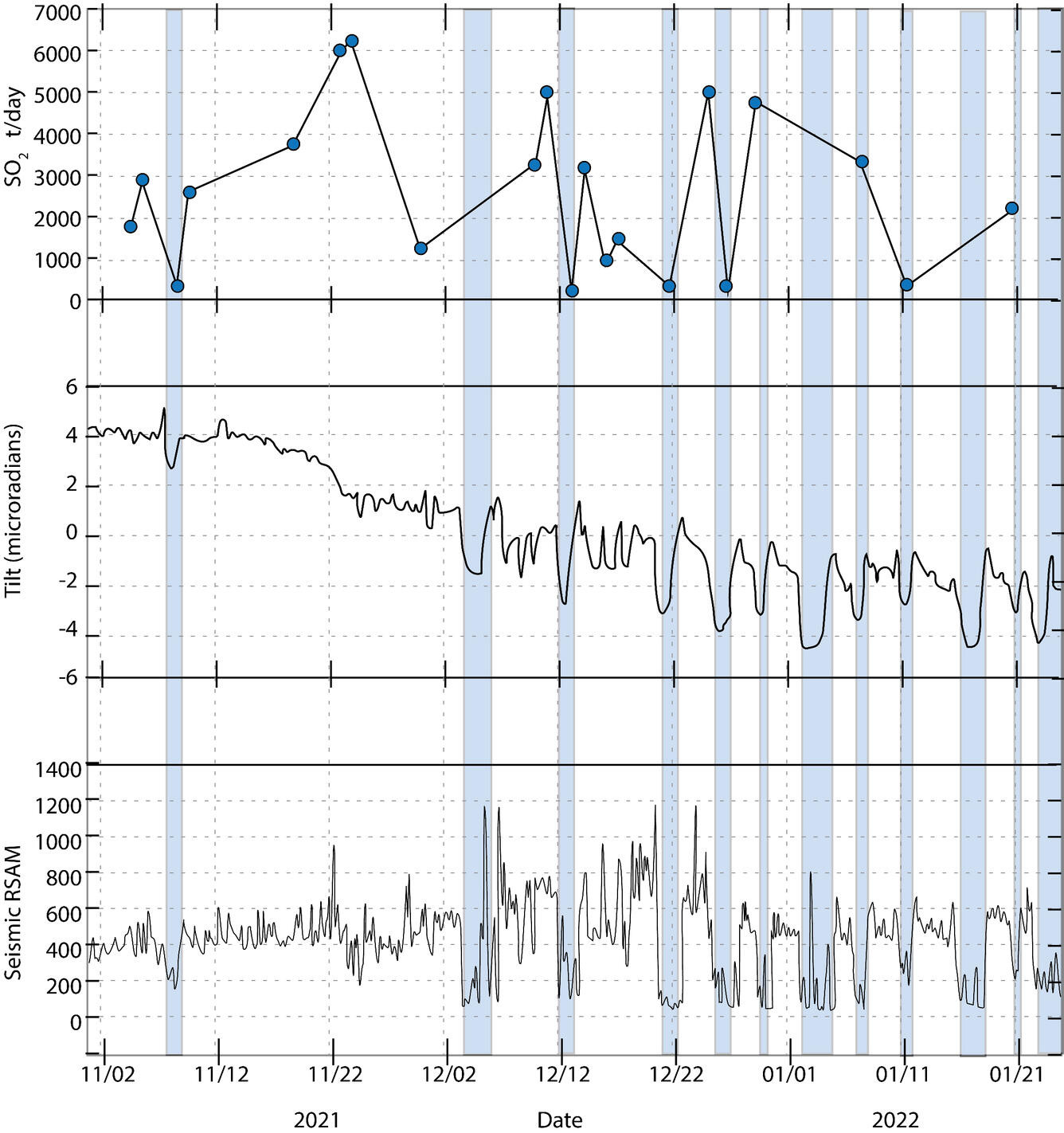 Gas data shows large fluctuations in sulfur dioxide (SO2) emissions that coincide with fluctuations in lava lake activity. When the lava lake is active during the peak of the inflationary cycle, the SO2 emission rate ranges anywhere from about 2,000–6,000 tonnes per day (t/d) of SO2. During decreased and paused parts of the cycle, emissions drop drastically to 100 to 300 t/d of SO2.

Finally, let’s discuss the geologic observations of what happens within Halema‘uma‘u crater as a cycle progresses. During the deflationary part of the cycle, the active lava lake surface motion begins to slow down, crust over, and the level of the active lava lake drops up to 10 m (33 ft).

These “draining events” are often accompanied by dozens of small spattering sources within the lake and overturns of the newly-formed crust. The solidified surface texture of the lava takes on a more rough and jagged appearance instead of a smooth and flat texture.

In some past cycles, once the lava reached a stable, minimum level, minor activity continued in the embayment including the occasional lava crust overturning. This activity, when present, is maintained until the inflationary period recovers the lost deflation, and tremor begins. Reappearance of the lava is followed by increased SO2 emissions.

When lava returns, it arrives inside the west spatter cone first, often overflowing the cone. The embayment north of the west vent cone fills with lava, which flows rapidly into the active lake area. This activity usually increases for several hours until the lava lake overflows its levee margins, building them up a little higher while also filling in lower sections of the older inactive lava crust from earlier in the eruption. The lava lake activity ultimately stabilizes within the levees until the next deflationary cycle begins.

During the dozen cycles spanning November 2021 to present, these data streams have given us a pattern to anticipate both the disappearance and return of glow at Kīlauea summit (for now). So, if you’re planning a visit to Hawaiʻi Volcanoes National Park to view the glow, be sure to check Kīlauea’s eruption status and webcams at the USGS Hawaiian Volcano Observatory website.