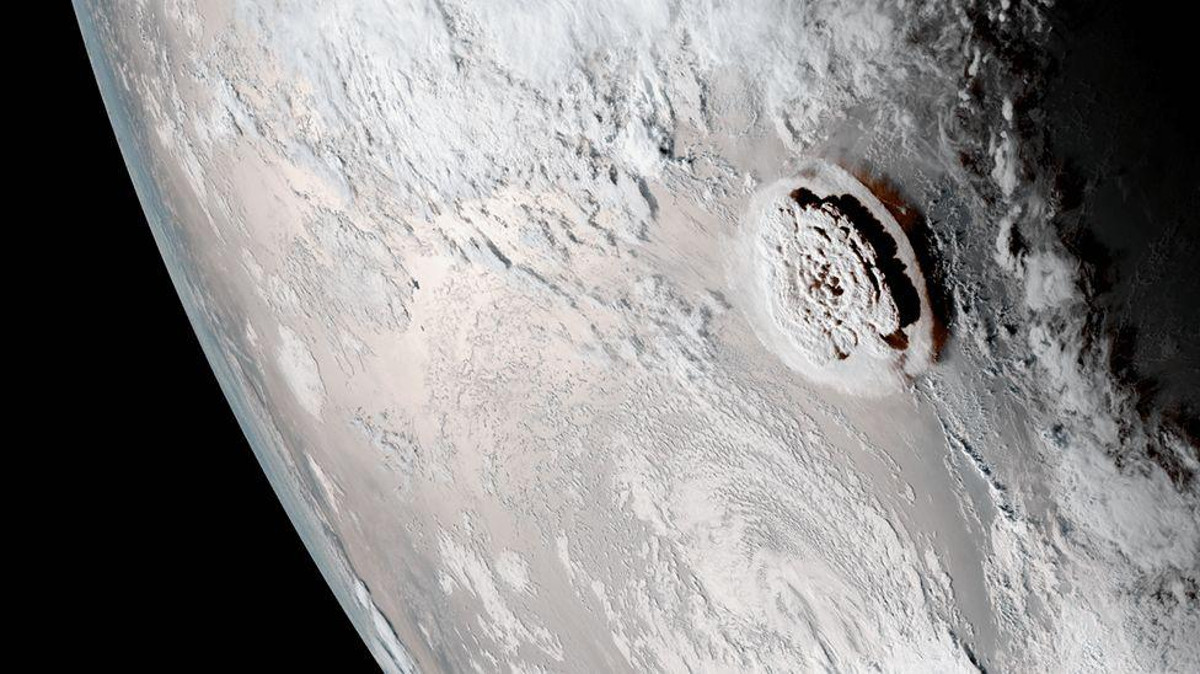 Hunga Tonga-Hunga Ha’apai volcano located in the Kingdom of Tonga produced a powerful eruption on January 15 just after 5 p.m. Tonga Time (TOT). The Tonga eruption was recorded on pressure sensors over a wide number of places around the world, including the Island of Hawai‘i about 4,900 kilometers (3,000 miles) away.

Hunga Tonga-Hunga Ha’apai is located about 64 kilometers (40 miles) north of the Tongan capital city of Nuku’alofa. As with many volcanoes in Tonga, the part of the volcano that is visible above water is small compared to the submarine extent of the edifice and eruptions can alternately grow new land or destroy any islands that are formed.

The volcano previously erupted in 2014-2015 in an extended sequence that created one larger island by connecting two separate islets. After this episode, the volcano went into a quiet period but it re-awakened in mid-December 2021.

The largest eruption occurred on January 15 from about 5:10 to 5:30 p.m. TOT, about 6:10 to 6:30 p.m. Hawaii Standard Time on January 14, and shot ash and hot gas tens of kilometers (several miles) into the atmosphere. Several centimeters (about 1 to 3 inches) of ash was deposited on the main island of Tongatapu and Nuku’alofa.

The skyward rushing ash column was amongst highest observed in modern times and this column generated strong air pressure waves which moved up from the volcano and spread outward from Tonga. Incredibly, the air pressure waves were observed over the entire Earth and people in Alaska (nearly 10,000 kilometers or 6,000 miles away) heard sounds from the eruption. How was this possible?

The pressure waves might dissipate quickly if the Earth’s atmosphere were uniform. Instead, the atmosphere is layered, and these layers help sound to move efficiently. For pressure waves, the layers relate mostly to the temperature and wind speed of the air and the efficient movement of these waves occurs in the layers called the troposphere, stratosphere and thermosphere.

The speed that pressure waves travel through the Earth’s atmospheric layers is about 1,100 kilometers or 700 miles per hour. At those speeds it would take a little more than 4 hours for the sound to travel from Tonga to Hawaii.

The USGS Hawaiian Volcano Observatory (HVO) operates a set of microphone-like pressure sensors that are deployed to “listen” to our own volcanoes. If there is a large global eruption, and the atmospheric conditions allow, then that eruption can also be captured on the HVO pressure sensor network.

If we look at the pressure sensor data for the time about four hours after the recent Tonga eruption, we see a large pressure pulse moving over Hawaii (see the two sensor recordings in the figure) at 10:40 p.m. HST on January 14. While Hawaii’s pressure sensor network is designed to detect eruptive activity for Mauna Loa, Kīlauea, and along the Hawaiian rift zones, it also captured the sound waves from the distant Tonga eruption.

Close inspection of the waves observed in the figure illustrates the idea of audible and infrasound waves discussed earlier.

The pressure waves are wider at the start of the event and become narrower with time. Since the plot shows wave size with time, this means the earlier waves (left side of the plot) show slow changes of pressure with time. With more time passing, the wave pressure oscillates more quickly. This means that the first waves are low frequency, and the later waves are higher frequency.

The human ear can generally hear pressure changes higher than about 20 cycles per second (or 20 hertz). Most of the waves shown in the plots are very low frequency and would not be detected by the human ear.

In Hawaii, there were no reports of the Tonga eruption being heard, but they were seen traversing the atmosphere on top of Mauna Kea.

The observation of audible sound waves in Alaska and inaudible waves elsewhere is a topic of interest from scientists, who are looking at the ways that pressure waves propagate in the atmosphere. Regardless, the observation of sound waves moving over the entire Earth is remarkable.