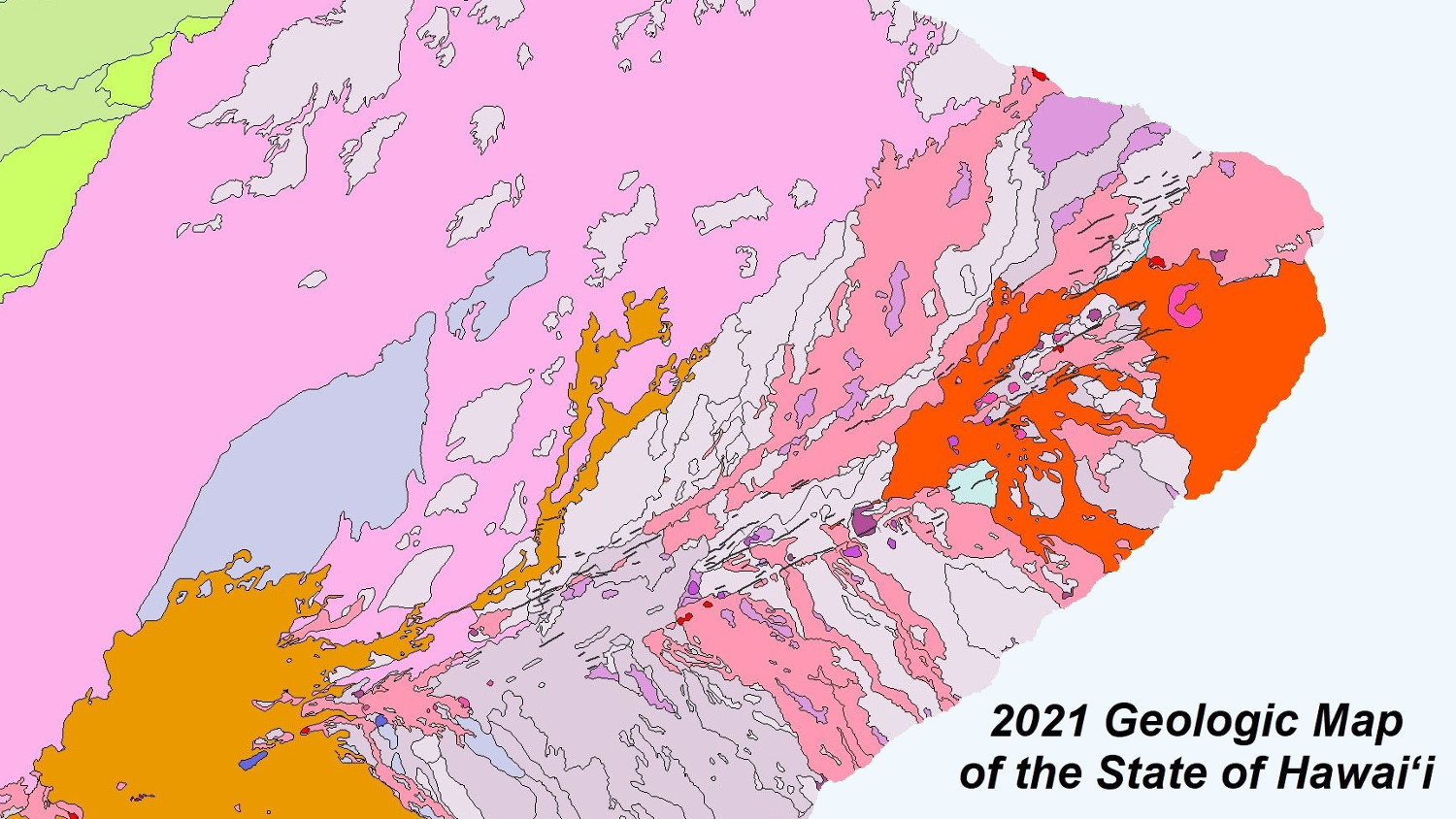 Inset taken from the USGS image showing a portion of the updated 2021 Geologic Map of the State of Hawai‘i. Full image, as presented by USGS, seen below.

VOLCANO WATCH: New Geologic Map Of The State Of Hawaiʻi

HAWAIʻI ISLAND - The weekly article by the USGS Hawaiian Volcano Observatory details "something new from something old", authors say. 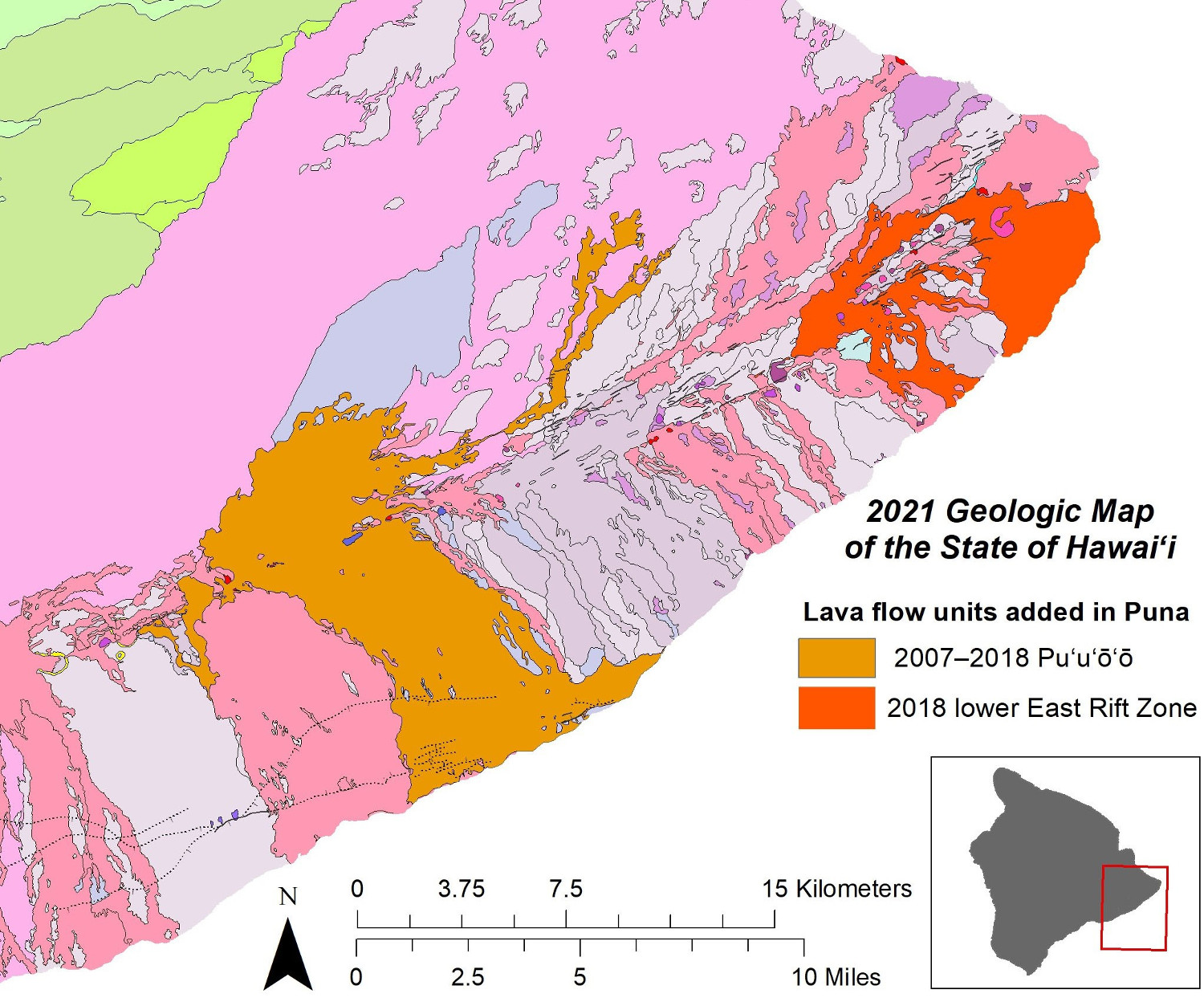 (BIVN) – The updated Geologic Map of the State of Hawai‘i is the focus of this week’s Volcano Watch article, written by U.S. Geological Survey Hawaiian Volcano Observatory scientists and affiliates.

The original purpose of geologic mapping in Hawaiʻi was to understand the distribution of groundwater and soils to support agriculture. But as geologic maps have been developed over time, they’ve provided basic information on how the Hawaiian Islands evolved, the workings of individual volcanoes, and the relative degree of long-term hazards posed.

The earliest comprehensive mapping of Hawaiian geology began in the Kaʻū District, Island of Hawaiʻi, in the 1920s by USGS geologists William Clark, Levi Noble, and Harold Stearns. Stearns oversaw the expansion of geologic mapping of the eight Hawaiian Islands starting with Oʻahu and continuing with Lānaʻi, Kahoʻolawe, and Niʻihau.

Stearns and a new recruit, USGS geologist Gordon Macdonald, mapped the geology of Maui, Molokaʻi, and the Island of Hawaiʻi. Geologic maps of all the islands except Kauaʻi were completed in the 1940s. Gordon Macdonald oversaw publication of the geologic map of Kauaʻi in 1960.

These early geologic maps identified individual lava flows erupted since Western contact and basic volcanic structure of the Hawaiian volcanoes. Dating of lava flow by analysis of decaying radioactive elements was not yet available so the progression of lava flows was deduced by mapping successive overlap of newer over older lava flows. In that way, a general sequence of volcanic activity was deduced, but resulted in older flows being grouped in larger units.

Chemical analysis of rocks from each of these lava flows revealed how magmas changed with time within each volcano. Each volcano followed a general progression of vigorous voluminous eruptions that built most of the volume of each volcano. Their outputs dwindled and changed chemically as each volcano aged before they finally became inactive and succumbed to erosion.

The next major revision of geologic mapping was launched in the 1980s. With a firm understanding of plate tectonics, hotspots, and radiometric dating, USGS geologists remapped the geology of the Island of Hawaiʻi in more detail. Mapping techniques had improved and included use of aerial photography. The map, published in 1996 by USGS geologist Ed Wolfe and Hilo resident Jean Morris, included lava flows from the first 12 years of the Puʻuʻōʻō eruption and every other eruption of Kīlauea and Mauna Loa since 1942. Using the data from this map, the USGS published the first Lava Flow Hazard Map showing the relative hazard from lava flows on the Island of Hawaiʻi.

A newly published (2021) geologic map of our state, updated from a preliminary 2007 version,  includes the early mapping of Stearns and Macdonald, the 1996 geologic map of the Island of Hawaiʻi, new mapping of East Maui, West Oʻahu, and West Molokaʻi volcanoes, and the Halemaʻumaʻu overflows and Puna lava flows of 2018.

USGS geologist Dave Sherrod worked with University of Hawaiʻi geologist John Sinton to make the most up-to-date geologic map of a very active volcanic chain of islands. The 2021 map can be thought of as compiling the long history of geologic mapping to characterize the much longer history of an active island archipelago.

But wait, there’s more! The pamphlet that accompanies the maps compiled new ideas about the way each island formed with the upgraded geologic framework of the islands. On Kauaʻi, the Līhuʻe basin probably formed by subsidence but there is still a question about whether one or two volcanoes formed the island. Oʻahu was built by three volcanoes, not two as Stearns thought. Haleakalā erupts every 200 to 500 years and its most recent eruption was probably more than 400 years ago—not in the late 1700s as previously thought.

Want to know more? The 2021 map is available as pdf files (pamphlet and maps as well as a GIS database). A printed version of the map is also in the works, but the publication date has not been finalized yet.

Geologic maps of Hawaii are always going to be a work in progress. Kīlauea volcano, on the Island of Hawai‘i, continues to erupt from Halemaʻumaʻu. Let these flows, as well as new geologic mapping of Mauna Loa volcano now being published, be reflected in the next geologic map for Hawaiʻi nei.