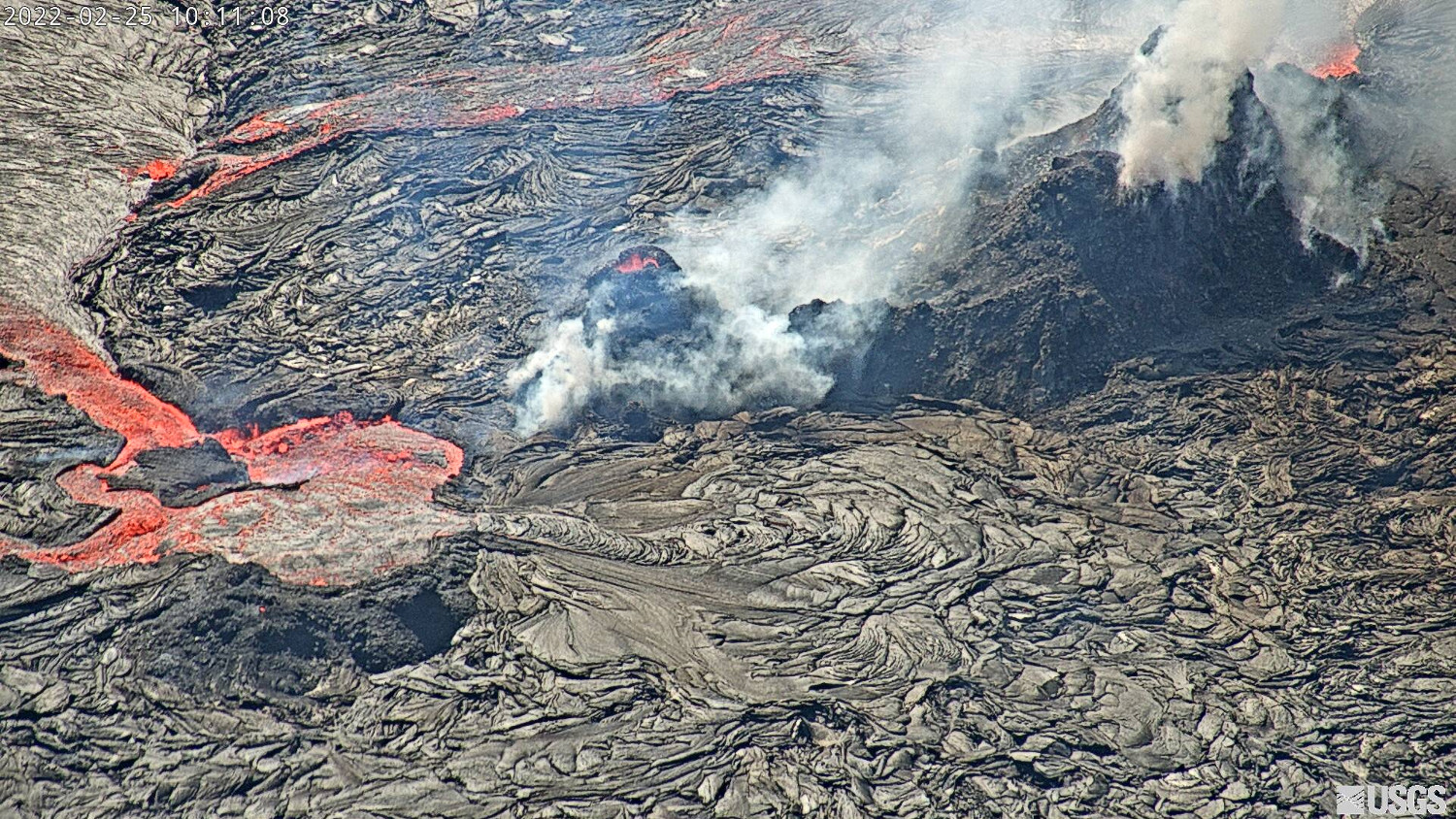 USGS webcam view of the west vent in Halemaʻumaʻu and the lava lake, from the northwest rim of the caldera, looking south. Image captured on Friday morning.

HAWAIʻI VOLCANOES NATIONAL PARK - The resumption of effusive activity in Halemaʻumaʻu corresponds with an increase in summit tilt.

(BIVN) – The eruption at the summit of Kīlauea volcano restarted on Thursday evening.

Scientists with the USGS Hawaiian Volcano Osbervatory report that lava effusion resumed at approximately 9:15 pm HST on February 24, “about 6.5 hours after inflationary tilt started and less than 15 minutes after an increase in volcanic tremor.”

All activity remains confined to the active lava lake and west vent area within the western part of Halemaʻumaʻu with minor ooze outs along the margins of the Halemaʻumaʻu crater floor, scientists say.

From the USGS HVO update on Friday morning:

Halemaʻumaʻu Lava Lake Observations: Eruption of lava from the western vent into the active lava lake within Halemaʻumaʻu crater resumed at approximately 9:15 pm HST last night. Continuous flows of active lava are erupting from the west vent and flowing to the south, west, and into the western active lava lake. There were no significant ooze outs along the margins of the lava lake over the past 24 hours. This resumption of effusive activity corresponds with an increase in summit tilt of approximately 3.2 microradians with corresponding increase in tremor at the summit. The high point on the floor of Halema’uma’u crater has risen approximately 15 meters (49 feet) over the last 24 hours. The active lava lake is now approximately 96 meters (315 feet) deep relative to when lava emerged on September 29, 2021. The erupted volume is 45 million cubic meters (59 million cubic yards) of lava as measured on January 25, 2021.

Summit Observations: At approximately 2:45 pm HST on February 24, 2022, tilt started to sharply increase by a total of approximately 3.2 microradians by 11:30 pm HST. At 11:30 pm HST yesterday tilt rates slowed and have since been steady. Seismic data shows that the volcanic tremor signal started to increase around 15 minutes (9:00 pm HST on February 24) before the resumption of effusive lava activity within the western part of the lava lake. Tremor now remains elevated and steady. Earthquake activity at the summit remains below background levels. A sulfur dioxide (SO2) emission rate of approximately ~340 tonnes per day (t/d) was measured on February 24.