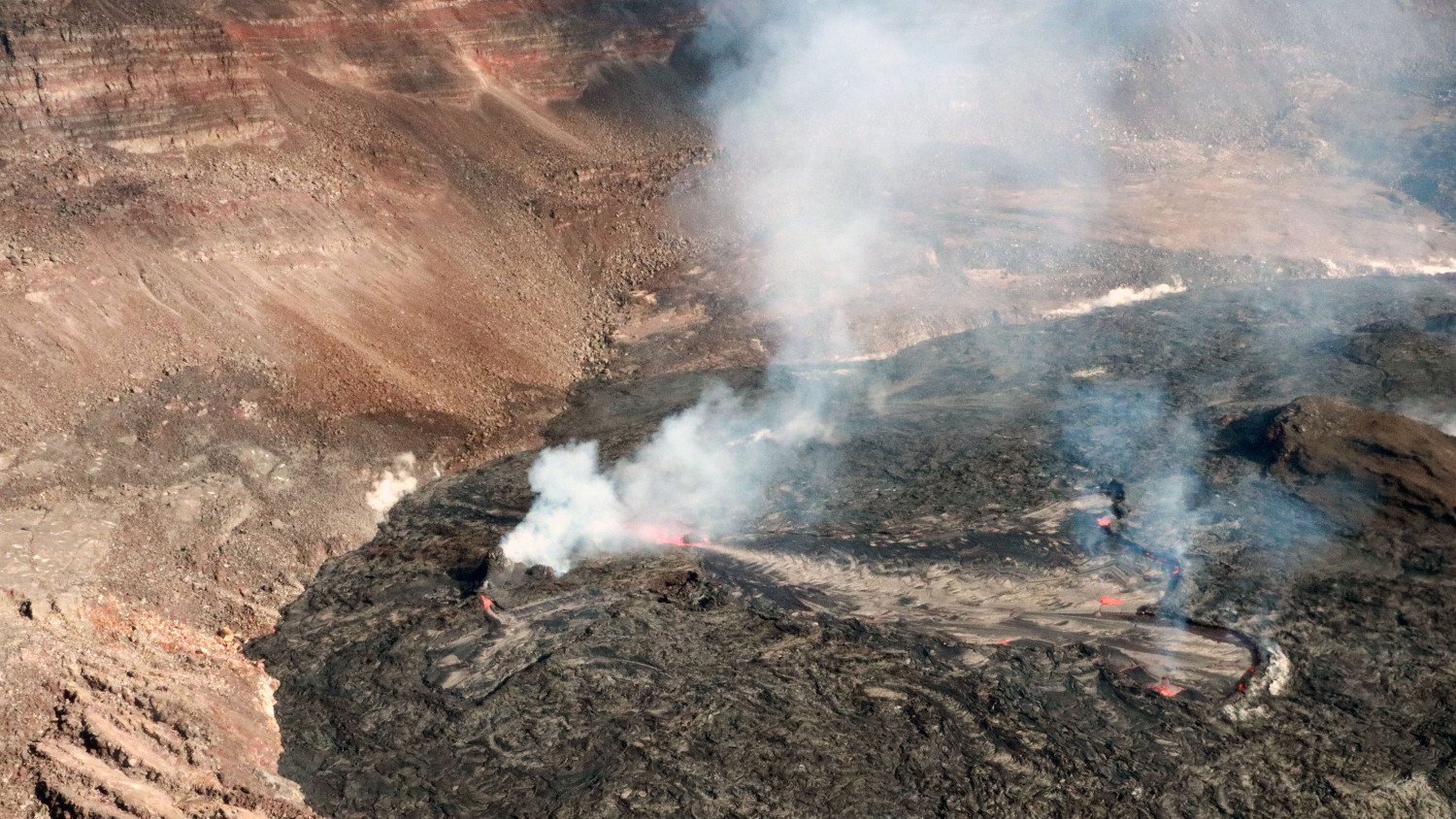 USGS: "This aerial photo, taken south of Halema‘uma‘u crater, shows the active part of the eruption at Kīlauea summit during a routine Hawaiian Volcano Observatory monitoring overflight on March 2, 2022. Though the bottom of Halema‘uma‘u crater is paved by lava erupted since this eruption began on September 29, 2021, recent activity has usually remained within the west portion of the the crater, in the vicinity of the west vent." (USGS image by K. Mulliken)

HAWAIʻI VOLCANOES NATIONAL PARK - Scientists say the current regime of intermittent eruption pauses and renewals could continue for a while at Kīlauea.

(BIVN) – The summit eruption of Kīlauea volcano was active on Saturday morning, with all activity confined to the active lava lake and west vent area within the western part of Halemaʻumaʻu crater.

The February 3rd installment of “Volcano Watch” introduced some of the data streams that are used to monitor eruption pauses and renewals at Kīlauea’s summit, including ground tilt from borehole tiltmeters. Tilt data also provided valuable insight into the behavior of the lava lake that occupied Halemaʻumaʻu crater from 2008–2018, before the series of collapses in 2018 changed Kīlauea’s summit topography.

In 2008, a short series of explosions preceded the opening of a lava lake in the “old” Halemaʻumaʻu crater. The lake grew steadily, forming what became known as the Overlook crater. Convection of lava within the lake provided a steady supply of sulfur dioxide (SO2), which was the main contributor to vog (volcanic air pollution) in Hawaiʻi. It also provided a reliable glow against the night sky that was visible throughout the summit region.

When lava began erupting from fissures in Leilani Estates in 2018, Kīlauea’s summit reservoir system began to deflate, and the lava lake quickly drained away before the summit began to collapse. 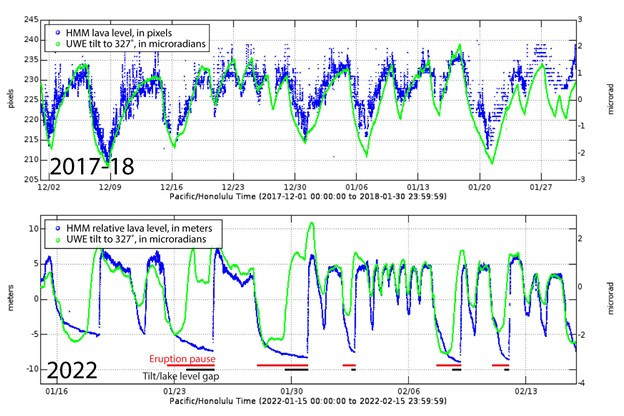 ABOVE USGS PLOT: “Summit tiltmeter data (green) shown against lava lake level (blue). The top panel is for the time period 12/1/2017–1/30/2018 and is representative of the “old” lava lake. For this panel, lake level was retrieved from thermal camera images, hence it is given in units of “pixels.” The bottom panel is from 1/15/2022–2/15/2022; in this case, the lake level is determined from a laser rangefinder and is presented as variations around its average level in meters. Note that in the bottom panel, the lake level graph has also been detrended to control for its steady rise. The bars at the bottom of the bottom panel show examples of eruption pause durations (red bars) and times during which inflation has recommenced, but eruption has not yet (black bars).”

The interpretation was that there was a fully open connection between the lava lake and the shallow summit magma reservoir, referred to as the Halemaʻumaʻu (HMM) reservoir. As a result, the lake acted like a barometer, with its level moving up and down in direct proportion to pressure changes in the HMM reservoir.

This unique behavior made it possible to determine certain quantities for the HMM magma reservoir that are difficult or impossible to determine at other volcanoes. For example, it is easier to track magma chamber volume changes than to determine the overall volume, but the open nature of the 2008–2018 lava lake also made this calculation possible.

In a 2019 publication, scientists showed that by tracking deformation and lava level changes during the opening stages of Kīlauea’s 2018 summit collapses, it was possible to determine that the entire 2018 collapse and eruption decreased the HMM magma reservoir volume by a most likely amount of 20%, leaving the majority of the magma in place.

As the February 3rd Volcano Watch stated, this gives us a rough idea of when the eruption pause might be over and active lava will return to the crater, allowing for an amount of forecasting that isn’t usually possible. The gap in time between the return of inflationary tilt and eruption renewal is also an indication that the connection between the surface and shallow HMM reservoir isn’t always open. While the summit is inflating, pressure is building in the reservoir, and it isn’t until the eruption starts again that the pressure is released. After this the system equilibrates and once again behaves as an open system, like it did in 2008–2018.

This is an interesting and important difference between the current lava lake and the lake that existed from 2008–2018 and presents the opportunity to learn more about the conditions under which the system might change from closed to open.

The current overall trend of Kīlauea’s summit magma system is slow deflation. This means there are no signs right now that the eruption could get more vigorous, and this regime of intermittent pauses and renewals could continue for a while. Without any changes, there may even be a time when there isn’t enough pressure left to drive the current eruption. However, Kīlauea Volcano rarely goes without change for long, so we will be sure to stay attentive and prepared for the unexpected.