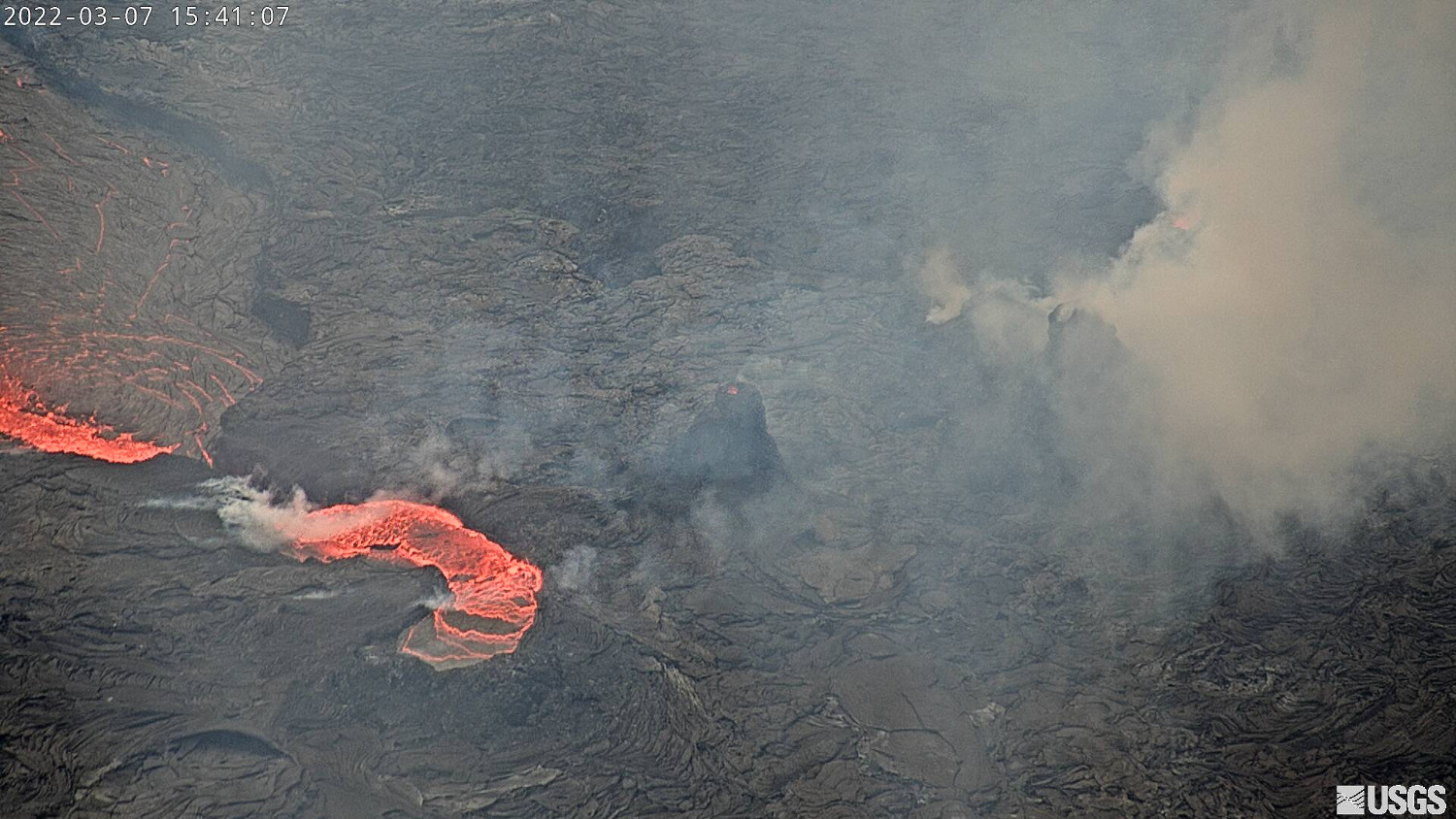 USGS webcam view on Monday afternoon of the west vent in Halemaʻumaʻu and the lava lake, from the northwest rim of the caldera. 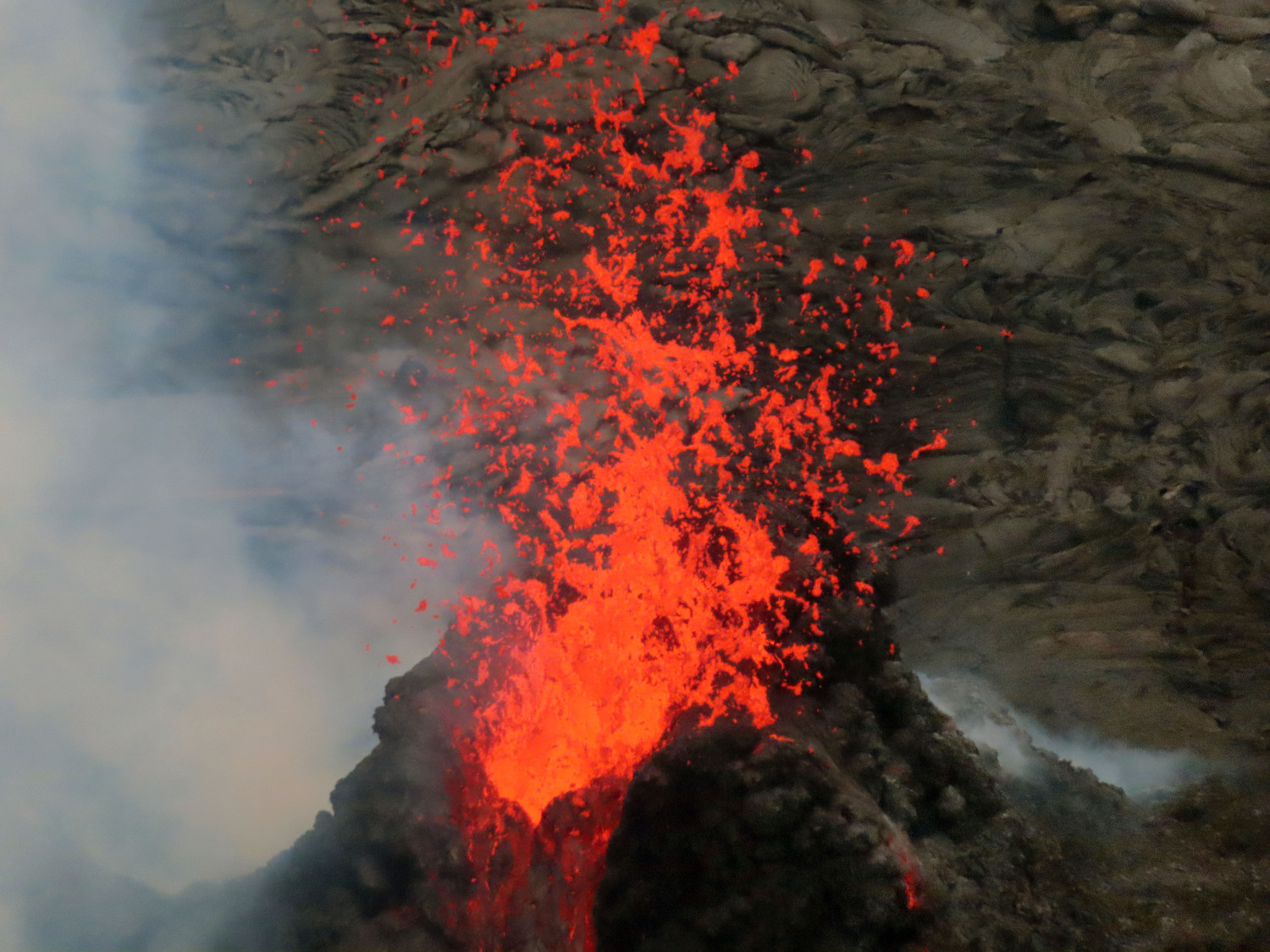 USGS: “Kīlauea’s summit eruption continues within Halema‘uma‘u crater. A number of vents are located in the western half of the crater, where the west vent cone used to be. On March 4, 2022, the highest of these features was measured at 19 meters (60 feet) in height and is shown in this photograph.” (USGS photo by L. Gallant)

(BIVN) – The latest pause in the summit eruption of Kīlauea volcano ended on Monday. From an afternoon update by the USGS Hawaiian Volcano Observatory:

The summit eruption of Kīlauea Volcano, within Halema‘uma‘u crater, has resumed since the HVO Daily Update issued this morning. The inflation mentioned in the HVO Daily Update was accompanied by an increase in tremor at approximately 9:30 am HST and the resumption of lava flows into the active lava lake at approximately 10:00 am HST. Based on previous observations, lava will likely be on the surface of the active lava lake this evening.

The activity had been paused since Sunday evening. No unusual activity has been noted along the East Rift Zone or Southwest Rift Zone, and all lava activity has remained confined to Halemaʻumaʻu crater, with no indications of activity migrating elsewhere on Kīlauea. 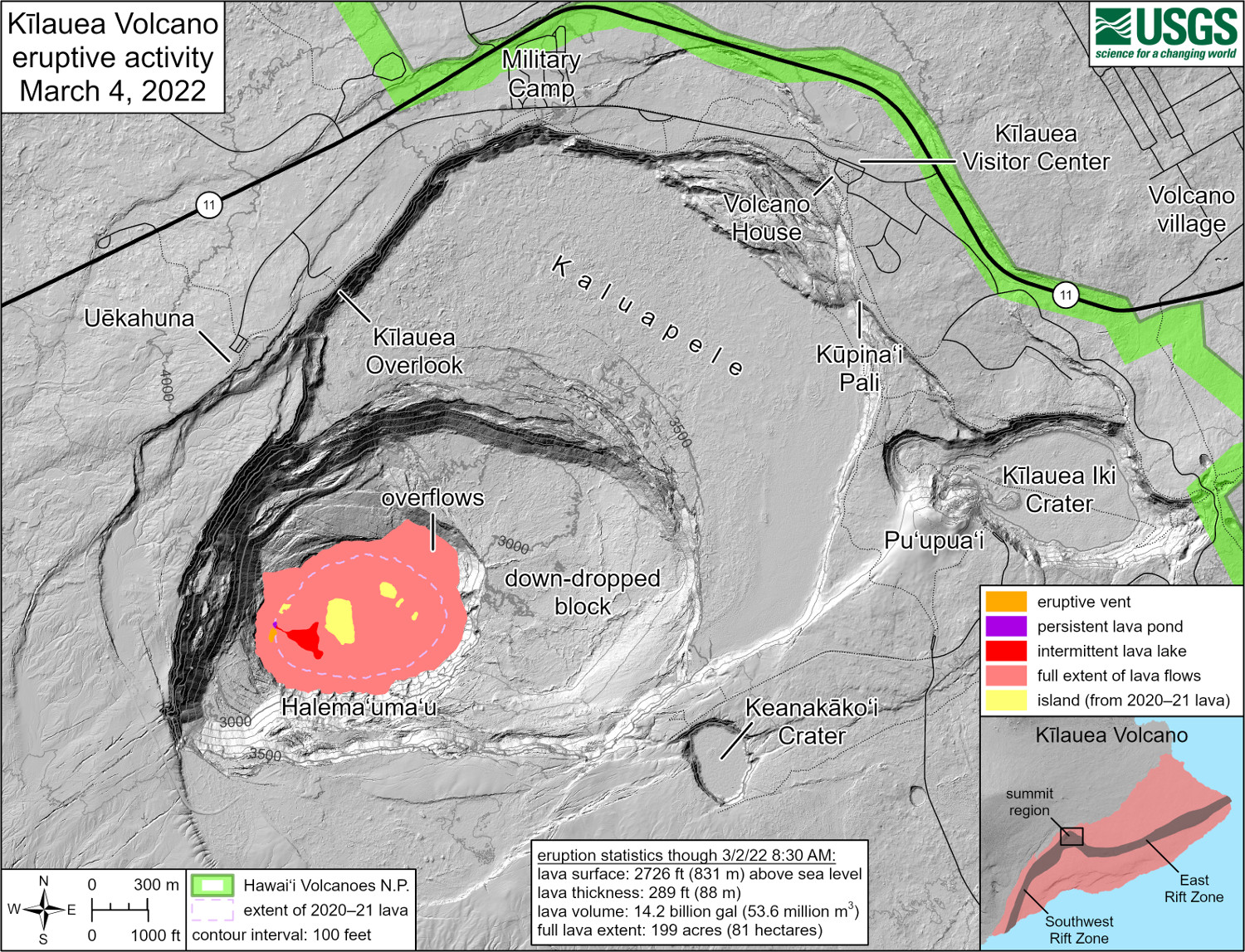 USGS: “This reference map depicts the ongoing Kīlauea summit eruption on March 4, 2022. One eruptive vent is intermittently active within Halema‘uma‘u, in the western end of the crater. When this vent is effusing lava, it pours into a lava lake, colored red on this map. During eruptive pauses, the only active lava is within a pond just north of the vent, colored dark purple on this map. The eruption statistics provided here are current as of the last HVO overflight on March 2, 2022; the volume-averaged surface of the whole lava lake was approximately 2,726 ft (831 m) above sea level at that time. When the eruption is vigorous, lava is visible from three public visitor overlooks in Hawai‘i Volcanoes National Park: Keanakāko‘i Overlook and KUPINAI Pali (Waldron Ledge) can see the eruptive vent and lava lake, while Kīlauea Overlook can occasionally see lava ooze-outs in the southeast part of the crater.”