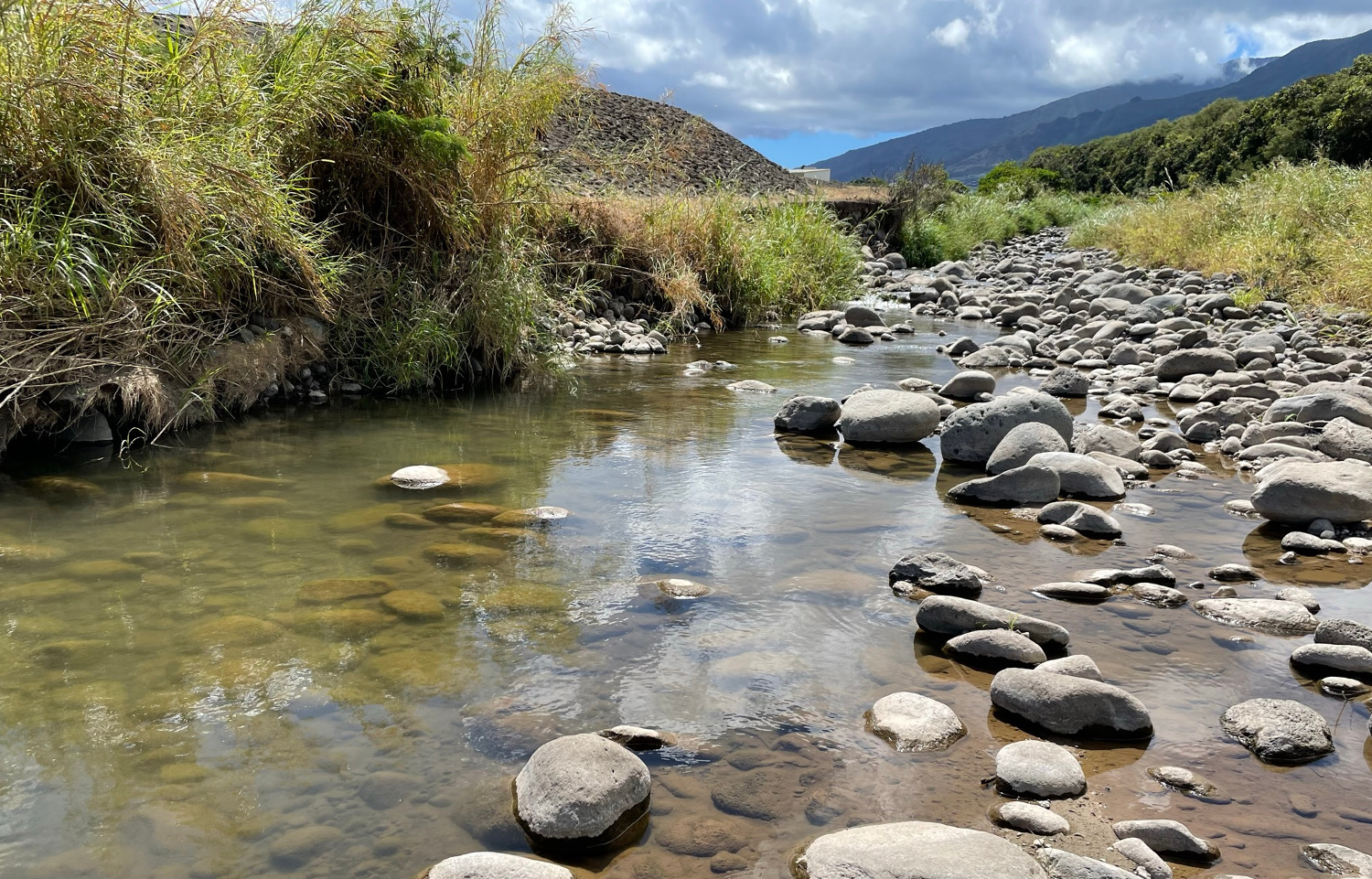 image of Wailuku River by the Hawaiʻi DLNR

Drought Conditions Beginning To Be Observed In Hawaiʻi

HAWAIʻI - Only windward sections of East Hawaiʻi were free of dryness and drought, officials say. 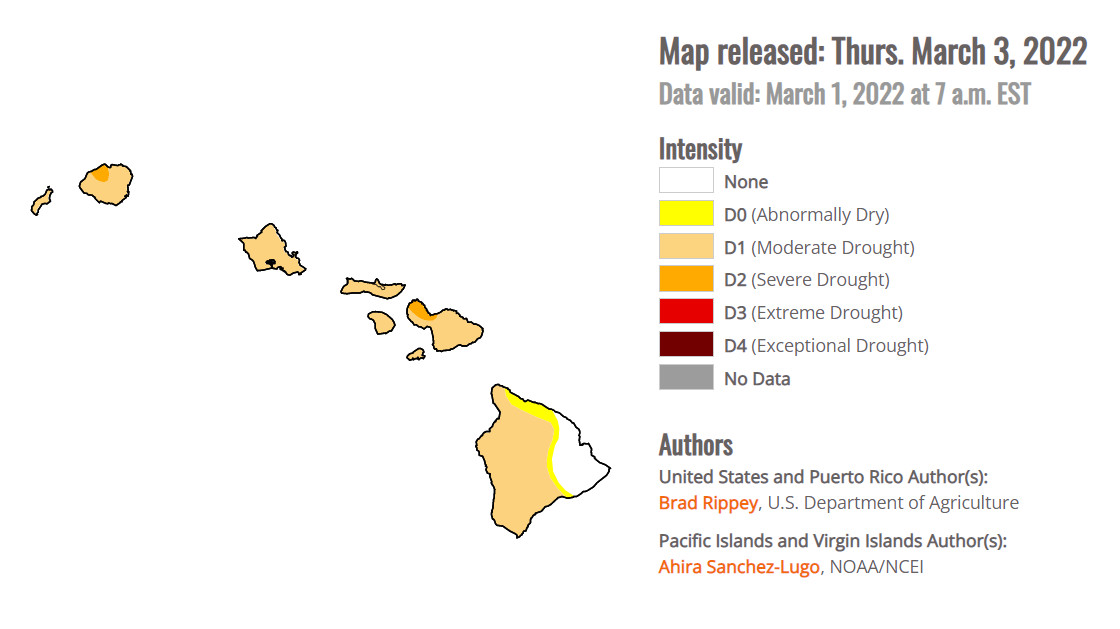 (BIVN) – Most of Hawai‘i is beginning to experience drought conditions, officials say, “during the time of year when rain is normally plentiful and regular.”

In a Hawaiʻi Department of Land and Natural Resources news release, people in Maui County are already being advised to take immediate actions to reduce water use, describing current drought conditions as “historic”.

In the release, State Commission of Water Resource Management Deputy Kaleo Manuel said, “A significant lack of rainfall across the island has resulted in a lack of groundwater recharge and surface flow. Normal wet season rainfall has not materialized and streams that are normally gushing with water are barely flowing. This is deepening our already grave concerns about the effects of seasonal drought on water supplies.”

The County of Maui’s municipal water supply is heavily reliant on surface flow to meet the potable water demands of the upcountry, central valley, and west Maui regions and the lack of streamflow will directly affect water supply for these areas.

Additionally, many communities on Maui are reliant on surface flow for domestic water supply, agricultural irrigation, and for growing kalo. A lack of wet season rainfall will also signal potential consequences for water supplies in the traditional, upcoming dry season.

Continuously monitored streamflow stations across the state are flowing at record low rates, with some approaching the lowest flows ever recorded. Drought conditions, as reported by the U.S. Drought Monitor show nearly the entire state in some level of drought, with all eight of the Main Hawaiian Islands experiencing at least moderate drought. The northwestern tips of Kaua’i and Maui are currently in severe drought. The only exceptions are a small slice in the center of Hawai‘i Island, described as abnormally dry, and the east side of Hawai‘i island, as the only place in the state, not currently experiencing drought conditions.

Oheo Stream at Kipahulu, Maui has stopped flowing above Seven Sacred Pools and Kaluanui Stream near Punalu‘u on O‘ahu has stopped flowing completely. Streamflow from North and South Kaukonahua streams into Lake Wilson is currently below 0.64 million gallons per day (mgd), threatening agricultural uses along the north shore. 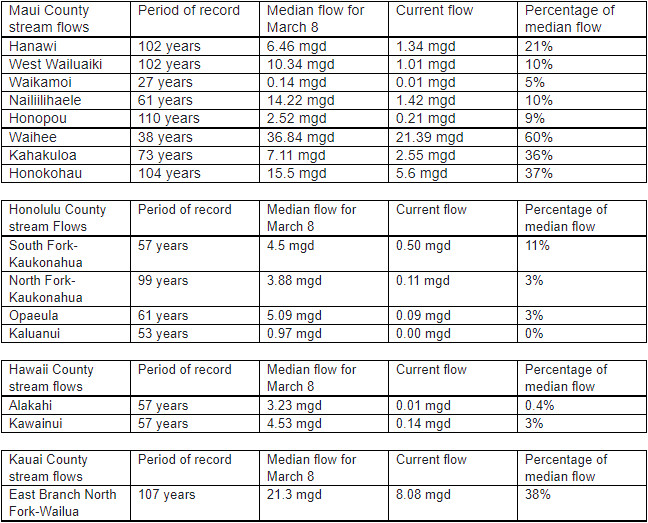 “As we enter, the more typically dry summer months, and without significant precipitation in the next few months, Hawai‘i could be in store for devastating wildfires this year. We are seeing this consequence of global climate change, played out on many fronts, including fire seasons that are now year around,” said Michael Walker, the State Fire Manager with the DLNR Division of Forestry and Wildlife (DOFAW). He said it’s important that people become educated now about how to prevent wildfires, which indirectly have impacts on water supplies, when native vegetation burns in forest watersheds.

CWRM is recommending water conservation measures including the elimination of landscape irrigation, car and truck washing, and reductions in home water use such as shorter showers and not running the faucet continuously when brushing your teeth.

In Hawaii, a 2-month dry spell has resulted in the return of widespread moderate to severe drought (D1 to D2), following a 3-week period in January where there was neither dryness nor drought. Through February 28, year-to-date rainfall at the state’s major airport observation sites ranged from 0.19 inch (4% of normal) in Kahului, Maui, to 7.83 inches (43%) in Hilo, on the Big Island. By the end of February, small pockets of D2 were noted on Maui and Kauai, while only windward sections of the Big Island were free of dryness and drought. Impacts from Hawaii’s short-term drought included low streamflow and poor vegetation health.