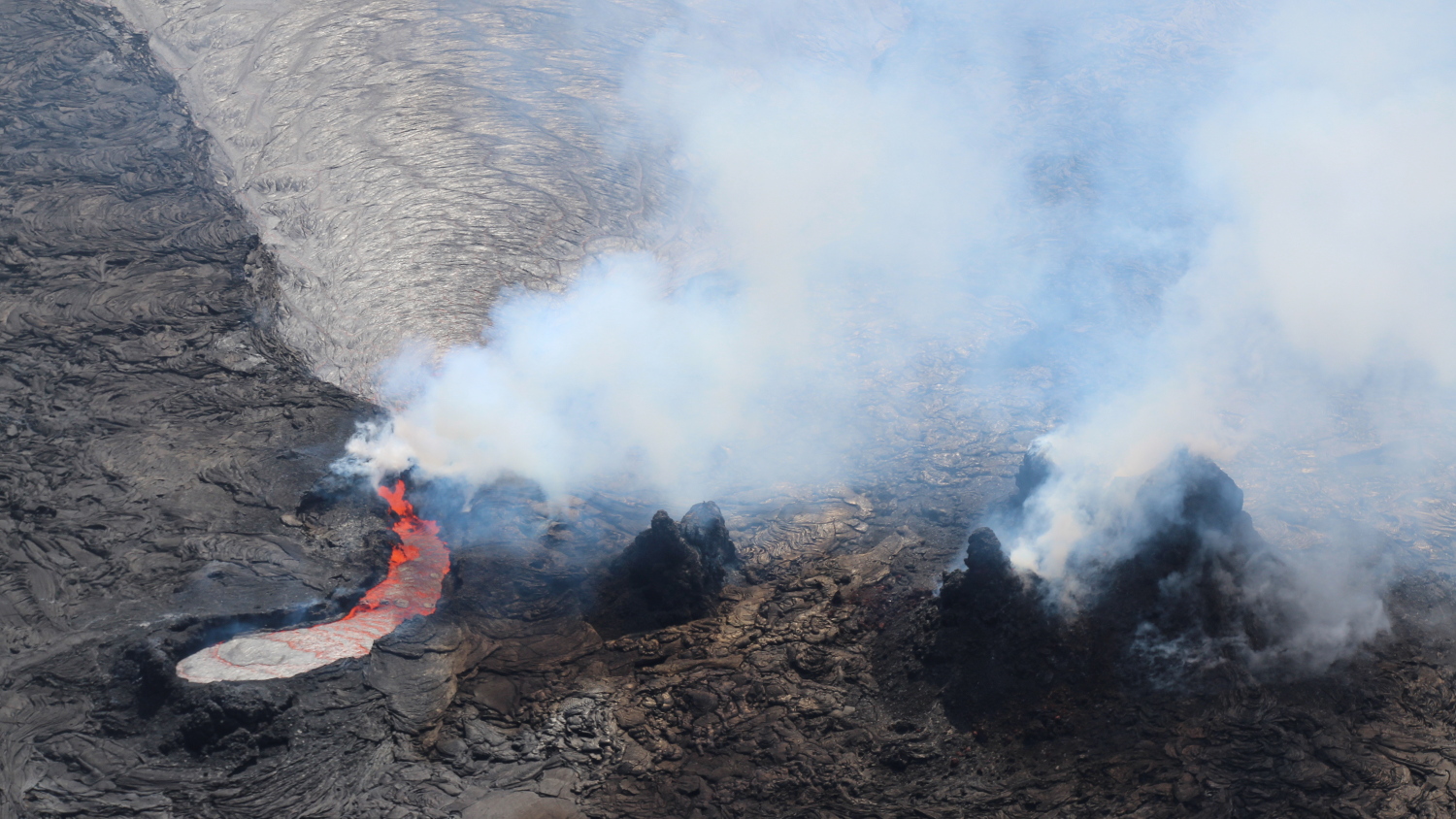 USGS: "Telephoto view, looking east, of the lava source area for the active lava lake within Halema‘uma‘u at the summit of Kīlauea on March 11. The is supplied from the embayment which is just north (left) of the remnants of west cone area (center and right). From there, lava flows through a narrow spillway and then pours into the active lava lake, which has a silvery grey appearance. Over the past few weeks, the west vent cone area has broken down and lava has infilled between its craggy remnants. The tallest remnant to the south (right) rises 27 meters (89 feet) above the crater floor." (USGS image by N. Deligne) 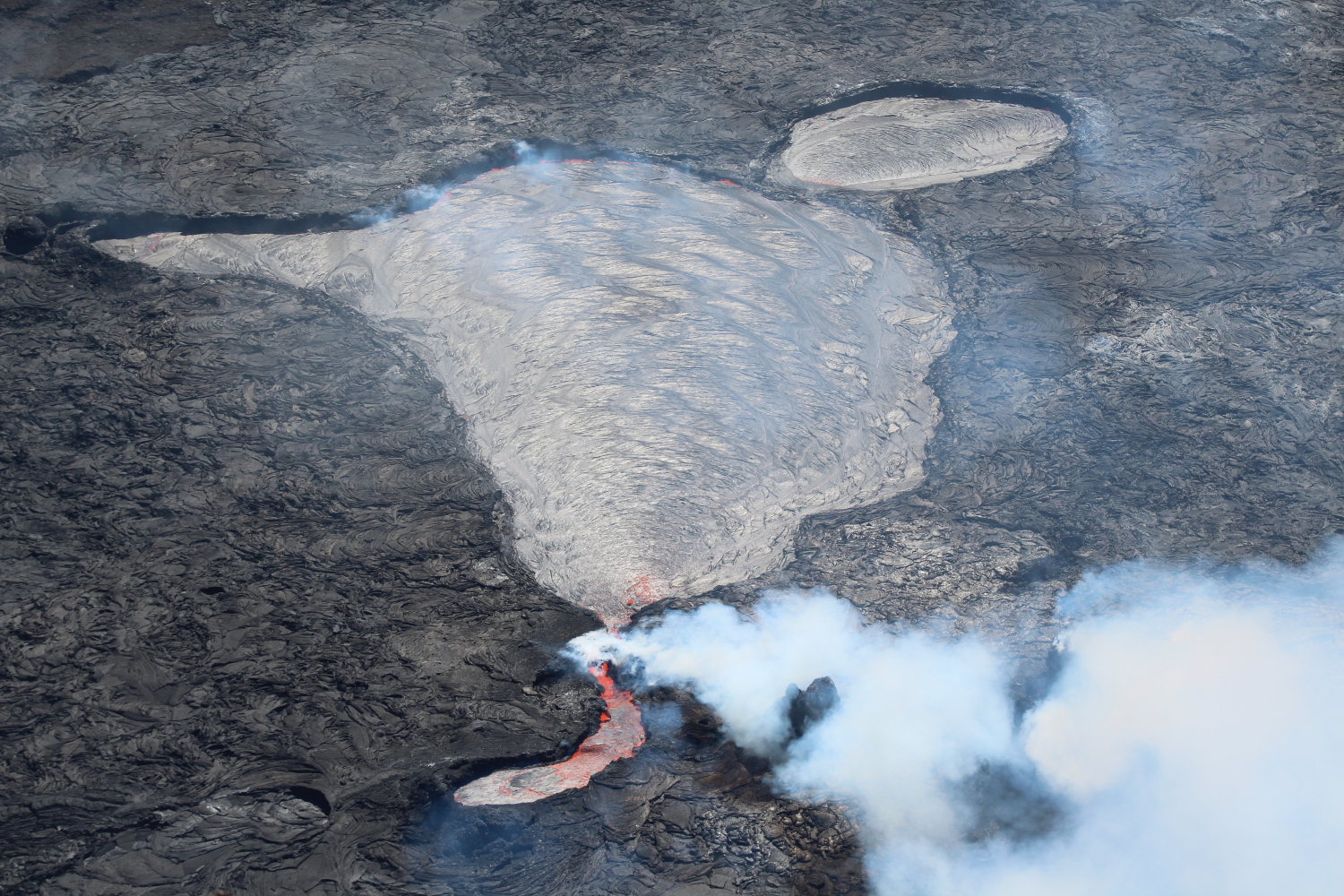 USGS: “Telephoto view looking east of the active lava lake within Halema‘uma‘u crater at the summit of Kīlauea on March 11, 2022. The craggy remains of the west vent cone, which has broken down over the past few weeks, are visible through the volcanic gas plume in the lower right. Lava supplies the lake through a small embayment and spillway (bottom center) just north of the west vent cone area. From the main active lava lake, some lava spills over a narrow divide into a second smaller lake to the southeast (upper right).” (USGS image by N. Deligne)

(BIVN) – The summit eruption of Kīlauea Volcano within Halemaʻumaʻu crater continued over the past 24 hours, scientists report, rebounding from yesterday’s decrease activity.

In a Monday update issued just before 3 p.m., the USGS Hawaiian Volcano Observatory expected that lava would “likely not be on the surface of the active lava lake” Monday evening, as steep deflationary tilt began at the summit that day at around 10 a.m. HST. The level of the active lava lake also dropped significantly throughout the day.

From the USGS on Tuesday morning:

Halemaʻumaʻu Lava Lake Observations: Eruption of lava from the western vent into the active lava lake surface (approximately 2.5% of Halemaʻumaʻu crater floor) continued through yesterday, but diminished in rate midday. The active western lava lake surface of Halema‘uma‘u crater has dropped in elevation over the past 24 hours, corresponding with the steep deflationary tilt. The amount of lava level drop could not be measured yesterday because the laser rangefinder is undergoing maintenance, but field crews will measure the level this morning. Lava lake crustal pieces are still moving normally but at a slower rate, and are growing larger because of the slower motion. The highest point on the Halemaʻumaʻu crater floor has risen approximately 97 meters (318 feet) since the eruption began on September 29, 2021. The erupted volume is 45 million cubic meters (59 million cubic yards) of lava as measured on January 25, 2021.

Summit Observations: Summit tilt yesterday turned to a steep deflationary trend around 10 am, leveled off overnight and resumed slight inflationary tilt trends this morning. Seismic data shows that the volcanic tremor is significantly reduced but ongoing this morning, and earthquake activity at the summit remains below background levels. A sulfur dioxide (SO2) emission rate of approximately 1900 tonnes per day (t/d) was measured on March 10.