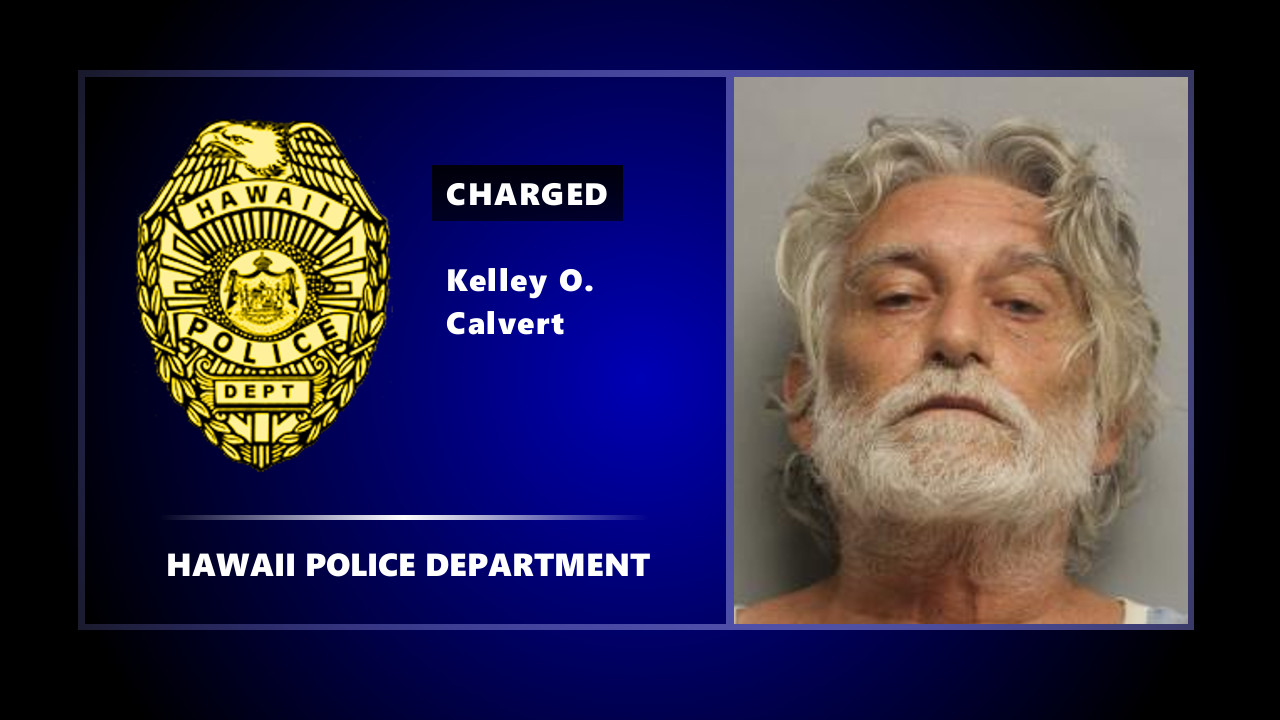 (BIVN) – A 61 year-old Puna man was charged with attempted murder, terroristic threatening, and assault on a police officer following two incidents that occurred in an Ainaloa subdivision on March 13.

According to a Hawaiʻi Police Department news release:

The charges stem from an early morning incident that occurred on Paradise Court in Tiki Gardens. Shortly after 6:00 a.m., Puna patrol officers responded to a report of a male victim that had reportedly been threatened with a large kitchen knife and then intentionally struck with a vehicle being operated by the suspect. The 58-year-old victim was transported via ambulance to Hilo Medical Center, where he was treated and later released.

During the course of the investigation, it was reported that Calvert had gone to the victim’s residence yelling about killing a dog. He then verbally threatened to kill the victim. Calvert then left the area.

When officers later responded to Calvert’s residence they observed his vehicle in the open carport and saw Calvert immediately retreat into the residence.

Officers verbally engaged with Calvert who was seen holding a large kitchen knife; however, he initially refused to exit the house and verbally threatened officers. After negotiating with Calvert for a short time, he exited the residence and was arrested. During the course of being taken into custody, Calvert physically resisted arrest and assaulted one of the officers. The officer was treated by medics.

Detectives from the Area I Criminal Investigation Section responded to the scene to continue the investigation. Search warrants were later executed on Calvert’s residence, as well as his vehicle.

As the Complaint alleges, Calvert was charged with Attempted Murder in the Second Degree (engaged in conduct, which, under the circumstances as he believed them to be, constituted a substantial step in the course of conduct intended to culminate in his commission of the crime of Murder in the Second Degree, defined as intentionally or knowingly causing the death of another person), Terroristic Threatening in the First Degree (threaten by word or conduct with the use of a dangerous instrument, a knife), Resisting Arrest, and Assault Against a Law Enforcement Officer in the First Degree. If convicted as charged of Attempted Murder in the Second Degree, Calvert is subject to a sentence of life imprisonment with the possibility of parole.

Calvert will make his initial appearance on Tuesday in Hilo District Court. He remains in custody in lieu of $272,000.00 bail.

The case is being prosecuted by Deputy Prosecuting Attorney Joseph Lee. Officials say the charges “are merely allegations, and the Defendant is presumed innocent unless and until proven guilty.”

Police ask anyone who may have witnessed the incident on Paradise Court to contact the police department’s non-emergency number at (808) 935-3311, or Detective Blaine Morishita at (808) 961-2385 or email him at Blaine.Morishita@hawaiicounty.gov. Tipsters who prefer to remain anonymous may call Crime Stoppers at (808) 961-8300.