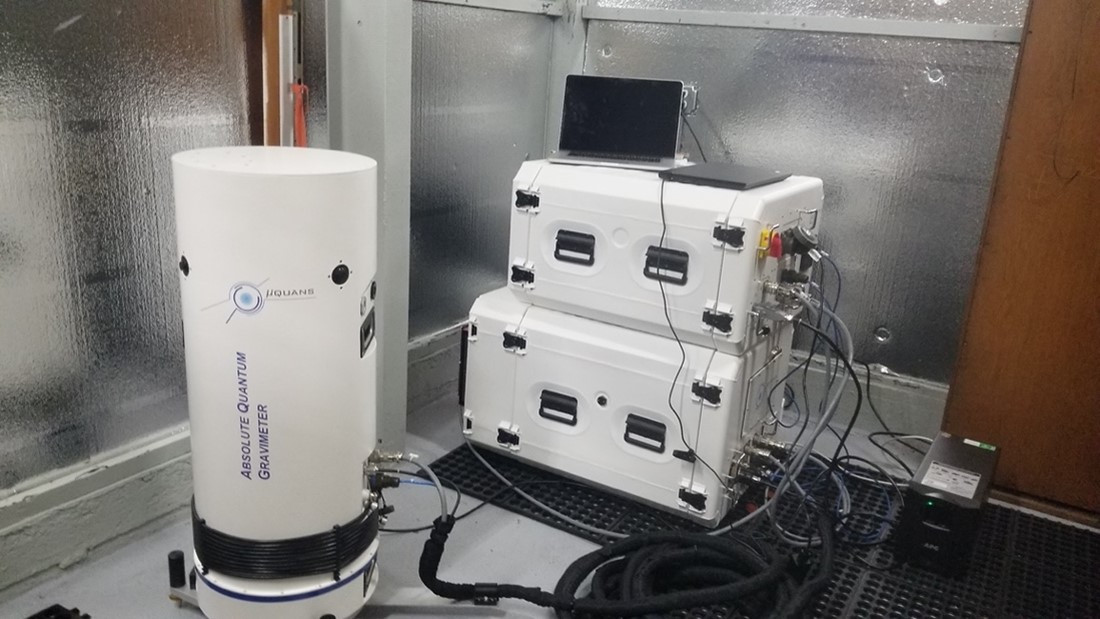 USGS: "The USGS Hawaiian Volcano Observatory’s Absolute Quantum Gravimeter is undergoing set-up, testing, and calibration before installation at the summit of Kīlauea." (USGS image by A. Ellis)

(BIVN) – As the eruption within Halemaʻumaʻu crater at the summit of Kīlauea continued over the past 24 hours, scientists maintain constant watch of the Hawaiʻi island volcano using a variety of instruments; including a new “Absolute Quantum Gravimeter”.

There are two main types of gravimeters: relative and absolute.

Relative gravimeters are the most common. They contain a weight attached to a sensitive vertical spring. Gravity stretches the spring, and the amount of stretch is proportional to the measurement of local gravity. The relative gravimeter measures the difference of gravity between various locations. Unfortunately, these instruments suffer from “drift,” which adds noise to measurements conducted over more than a few weeks-to-months, and their accuracy gradually decreases. The drift can be characterized and removed by measurements repeated frequently.

Absolute gravimeters directly measure the acceleration of gravity. Free-fall absolute gravimeters, the most common type, use lasers to measure the free-fall acceleration of a small reflecting prism (a test mass) in a vacuum. Unlike relative gravimeters, absolute gravimeters do not drift nor degrade in accuracy over time. However, they are large in size, have delicate mechanical parts, require an ample power supply, and are not designed for use in harsh field conditions such as volcanoes. Those that are field portable are not capable of long-term continuous measurements or sensitive enough to detect the small changes needed for volcano monitoring.

Similar to the free-fall absolute gravimeters, HVO’s new AQG measures the acceleration of a small test mass in a vacuum. However, the AQG overcomes the limitations of classical free-fall absolute gravimeters by dropping clouds of laser-cooled rubidium atoms instead of small prisms. This allows for accurate and long-term continuous measurements. The AQG is also compact in size and can be deployed in the field at active volcanoes and run continuously without “drift.”

The same model of AQG has been installed on the north flank of Mount Etna volcano in Italy, which frequently erupts. The instrument has successfully recorded many months of high-quality data despite high vibration noise levels. It continues to help improve volcano hazard reporting and crisis management planning in Italy.

Currently, HVO’s AQG is undergoing experimental testing and calibration. Eventually, its long-term home will be co-located with other instruments at Kīlauea’s summit, where it will take continuous measurements except when conducting occasional field deployments.

Although the AQG is new to HVO, gravity monitoring has a long history in Hawai‘i. First measurements in the 1800s and 1900s were difficult and often unsuccessful until portable relative gravimeters were developed. Since the 1970s, relative gravimeters have been successfully used for measurements at over 65 benchmarks on the Island of Hawai‘i. These benchmarks are measured every couple of years to detect magma accumulation or shallowing within Mauna Loa and Kīlauea volcanoes over long time scales.

Additionally, starting around 2010, there were a handful of continuous relative gravimeters at Kīlauea summit and Puʻuʻōʻō. They played a critical role in monitoring the 2018 Kīlauea eruption, allowing scientists to estimate the rate and volume of magma accumulation and withdrawal in the East Rift Zone and summit. Unfortunately, these instruments were either lost during summit collapses associated with the eruption or have since stopped functioning, leaving HVO with no operational continuous gravimeters for several years.

Following the 2018 Kīlauea events, HVO received funding from the Additional Supplemental Appropriations for Disaster Relief Act of 2019 [H.R. 2157]. As a start to rebuilding the continuous gravity network for Kīlauea, one gravimeter was reinstalled on Halemaʻumaʻu crater floor in June 2021. In April 2022, there are plans to install two additional continuous relative gravimeters at other locations on Kīlauea.