WASHINGTON D.C. - Senate Judiciary Committee member Hirono highlighted the historic nature of Judge Jackson's nomination to be the first Black woman ever to serve on the U.S. Supreme Court. 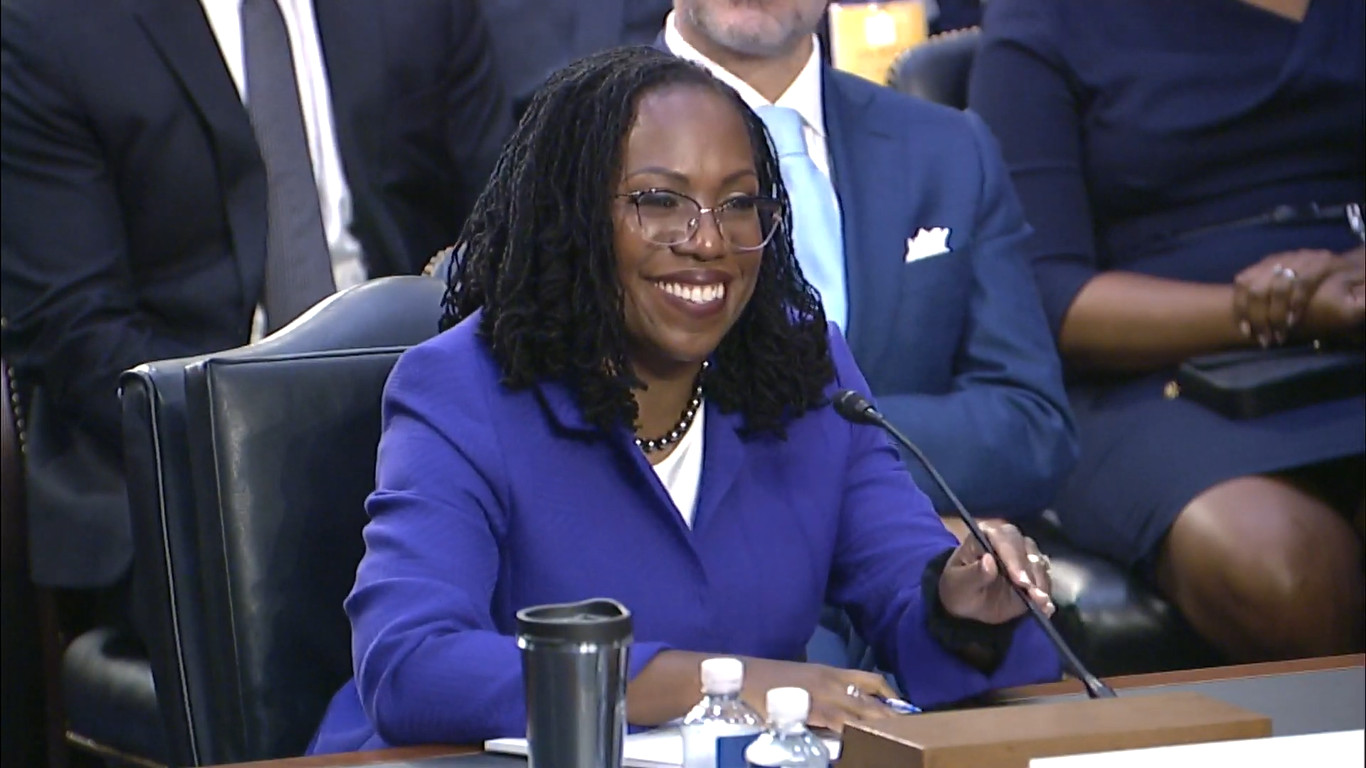 (BIVN) – U.S. Senator Mazie Hirono (D, Hawaiʻi) delivered opening remarks on the first day of the Senate Judiciary Committee hearing on the nomination of Judge Ketanji Brown Jackson to serve as an Associate Justice of the Supreme Court of the United States.

Senator Hirono “highlighted Judge Jackson’s extensive professional qualifications, her personal background, and the historic nature of her nomination to be the first Black woman ever to serve on the Supreme Court”, a news release stated, and the Hawaiʻi senator also “spoke to Judge Jackson’s track-record as a fair and impartial jurist with a commitment to the Constitution and the rule of law.”

Judge Jackson, congratulations on all you have accomplished throughout your life and career: national champion in speech and debate as a high schooler; undergraduate and law degrees from Harvard—each with honors; three clerkships in federal court, including one at the Supreme Court for Justice Breyer, whom you have been nominated to replace; an accomplished career as a lawyer at the trial and appellate level, both in private practice and as a public defender; two stints at the U.S. Sentencing Commission, including as Vice Chair; nine years as a federal judge—first in the D.C. District Court and then on the D.C. Circuit Court of Appeals.

Now, you’ve been nominated to the United States Supreme Court.

I’ve enjoyed reviewing your record and getting to know you over the past few weeks, and now the American people will get to know you over the course of this week. Beyond your impressive credentials, here are a few other things I want them to know. You were born in Washington, DC, to two public school teachers. You moved to Miami, Florida at a young age so your Dad could attend law school. You were inspired to pursue a career in law by watching your Dad study for his classes at the kitchen table. You first considered attending Harvard—a thought that hadn’t previously crossed your mind—after attending a speech and debate competition on the Harvard campus during high school. You’ve been confirmed three times by the Senate—all on a bipartisan basis—first to the Sentencing Commission and later to be a judge on the D.C. District Court and on the D.C. Circuit. You are the second generation in your family to go to college and worked extremely hard to get where you are today. You are a wife and a mother to two children.

Clearly, your life and your career have more than prepared you to serve our nation on the highest Court, which is why it is no surprise that there is broad consensus across the political spectrum that you are eminently qualified to serve on the Supreme Court.

As former-Fourth Circuit Judge Michael Luttig—a George H.W. Bush appointee—said, you are “as highly credentialed and experienced in the law as any nominee in history.”

Twenty-three Attorneys General said, “Judge Jackson is a highly qualified legal mind, who has been at the forefront of the legal field for decades and will serve our nation well as the first Black woman Supreme Court Justice.”

A group of law enforcement officers from across the country said, “Judge Jackson brings a depth of academic, public service, and judicial service that leads to but one conclusion – she is eminently qualified to serve on the Supreme Court of the United States.”

You are an accomplished jurist, having issued nearly 600 opinions that demonstrate a clear, even-handed approach to the law. You have sided with workers and with employers, for and against the government, and for prosecutors and for criminal defendants. Former D.C. Circuit Judge Thomas Griffith, a George W. Bush appointee, summed it up best when he said you “will adjudicate based on the facts and the law and not as a partisan.” Having reviewed your record, I strongly agree with that statement. But you are not just extremely qualified to serve on the Supreme Court—your nomination is an historic one.

The Supreme Court has existed for over 233 years, and of the 115 justices in the history of the Court, only five of them have been women, only two have been Black, and not a single one has been a Black woman. This is the Court that has decided cases that have had sweeping effects on everyday life, including decisions that have solidified rights for the LGBTQ+ people, empowered women, strengthened unions, and more. But this is also the same Court that has through the course of history upheld slavery, Jim Crow, and the unlawful internment of Japanese Americans.

For over 233 years the individuals making decisions that have altered the course of this country have almost exclusively been white men. It’s pretty remarkable when you consider the power that this Court has—and the historical lack of diversity of the people who exercised that power, the justices. But instead of celebrating the long-overdue diversity Judge Jackson would bring to the court some of my Republican colleagues and public figures have attempted to undermine your qualifications through their pejorative use of the term “affirmative action.” They have implied you were solely nominated due to your race, and for no other factor. Apparently, some have even claimed that we need to see your LSAT scores to determine whether you are a top legal mind.

This so incredibly offensive and condescending. Let me be clear when I say, this isn’t about filling some quota. This is about time. It’s about time that we have a highly qualified, highly accomplished Black woman on the Supreme Court. It’s about time our highest court better reflects the country it serves. And it’s about time that Black women and girls across the country can finally see someone who looks like them sitting on the highest court making decisions that will impact their lives. And they will now know that it is possible for them to do the same.

One cannot over-state the importance of representation. Your experiences and your background as a trial court judge, a public defender, a mother, a Black woman, and so much more—provide you with a uniquely different perspective than any of the eight other Justices on the Court.

Like your mentor Justice Breyer, I know you will engage with the other justices—both liberal and conservative to share these perspectives, challenge their views, and shape the Court’s direction for the better. With the personal and professional diversity you bring, you will expand the experience and knowledge of the Court and the decisions the Court makes will be better as a result.

Before I end, I also wanted to mention, I was glad to hear you reference Constance Baker Motley during your introductory press conference at the White House. Constance Baker Motley was an icon of the civil rights movement. As a lawyer for the NAACP Legal Defense Fund, she helped craft the argument in Brown v. Board of Education that finally put an end to “separate but equal.” She was the first Black woman to argue before the Supreme Court, ultimately arguing 10 cases before the Court and winning 9, including the case that allowed James Meredith to enroll at the University of Mississippi.

She became the first Black woman appointed as a federal judge, serving on the Southern District of New York for 20 years. And, in a world free from discrimination, she may have been the first Black woman to sit on the Supreme Court some 50 years ago. As you said at your press conference, you “stand on Judge Motley’s shoulders.” I have no doubt there will be a generation of young girls who will stand on yours.

Judge Jackson, I congratulate you and your family on your nomination. I thank you all for being here, and I look forward to hearing from you over the course of the next few days. Thank you, Mr. Chairman.