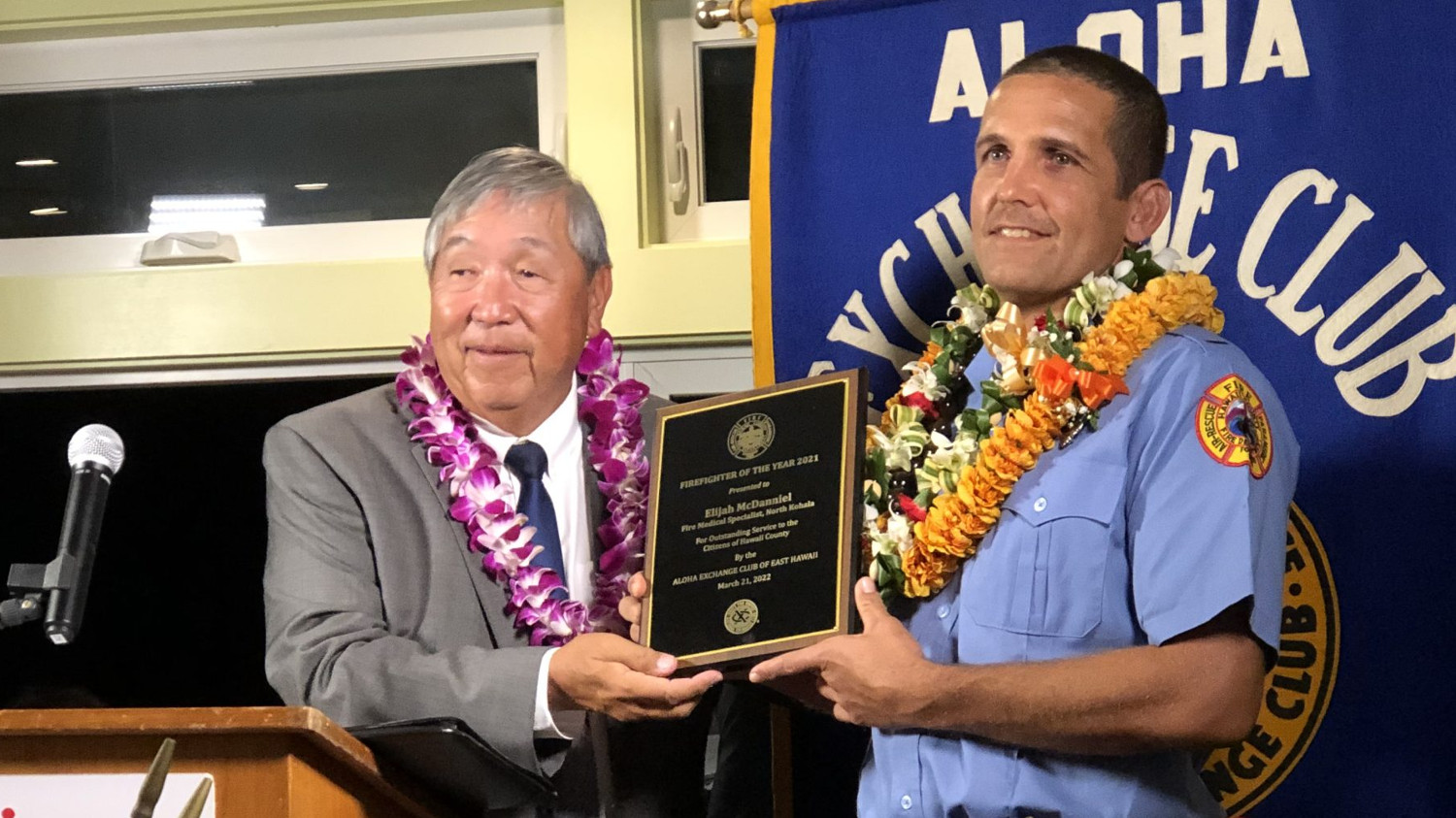 HILO, Hawaiʻi - The Aloha Exchange Club of East Hawaiʻi recognized the 2021 Officer of the Year and Firefighter of the Year during a ceremony on Monday. 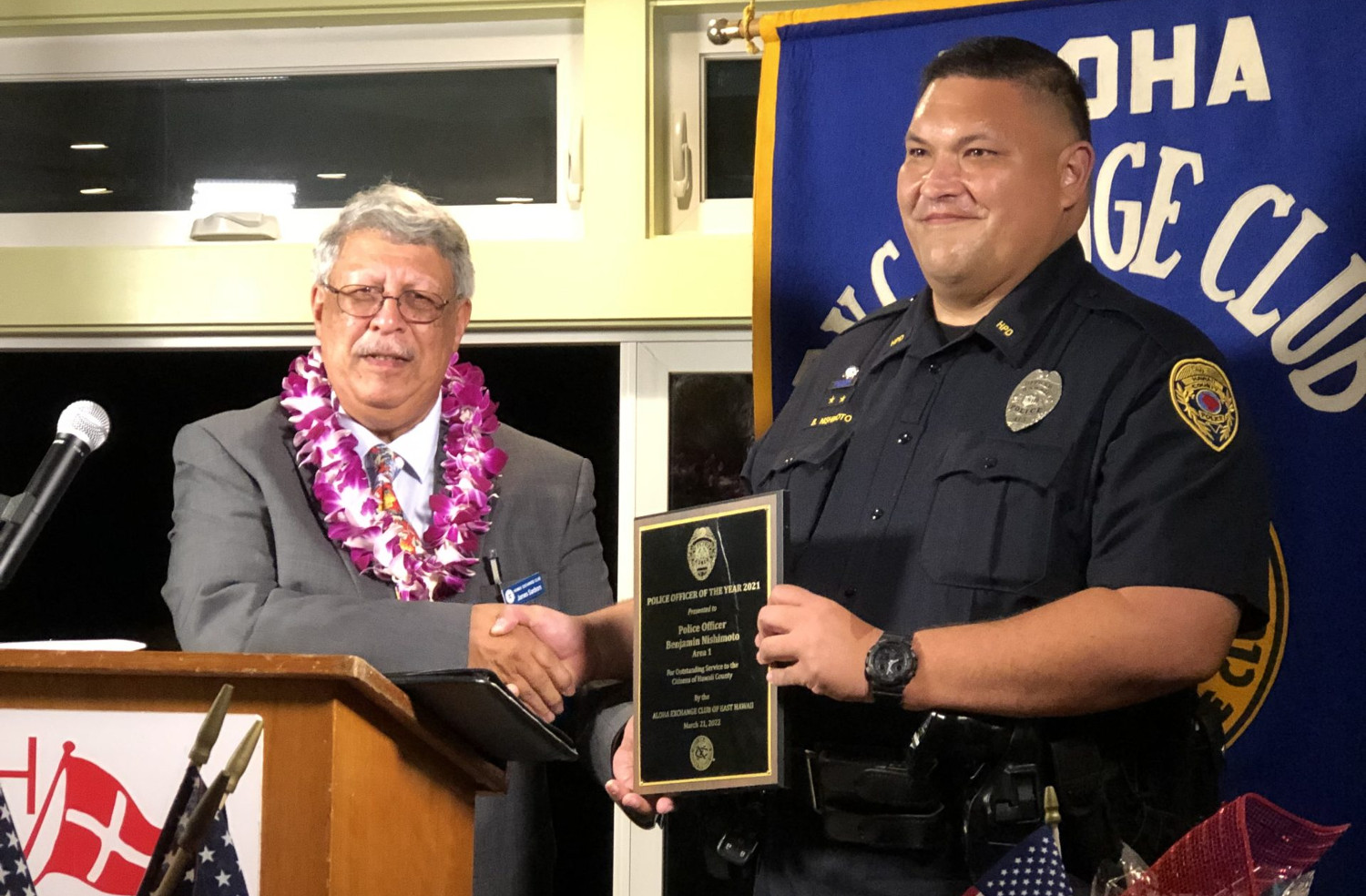 (BIVN) – The Aloha Exchange Club of East Hawaiʻi on Monday recognized the Officer of the Year and the Firefighter of the Year during a ceremony held in Hilo.

From the Hawaiʻi Police news release:

Officer Nishimoto, a 13-year veteran of the department, was recognized for his bravery and valor in the line of duty during an active domestic dispute that he and other officers responded to last June between a mother and son. The male suspect, who was in the garage, told officers that everything was fine but appeared agitated and anxious and went back into the house. Officer Nishimoto proceeded to the front door and, as he was talking to the female victim, heard the familiar sound of a round being chambered in bolt-action rifle.

Seeing the suspect emerge from the back of the kitchen with a rifle at the ready, Officer Nishimoto alerted his fellow officers, giving them precious extra time to retreat and seek cover as the suspect opened fire on the officers. Without hesitation or regard for his own personal safety, Officer Nishimoto was able to bring the incident to an end. His courage and quick thinking saved the lives of his coworkers and the people within the residence.

Police Chief Paul K. Ferreira thanked the Aloha Exchange Club for honoring Officer Nishimoto, and their unwavering support of our officers throughout the years.

“This tragic incident is a reminder to all of us about the inherent unknown dangers associated with the honorable profession we have chosen as police officers,” said Chief Ferreira. “And I am so very thankful for the officers like Ben Nishimoto, who place themselves in harm’s way on a daily basis to ensure the safety of the Hawai`i Island community.”

For Firefighter of the Year, McDaniel was recognized for his dedication to serving his community and his professional leadership. He has been with the fire department for 14 years and trained as an Emergency Medical Services Specialist for more than a decade. McDaniel was praised for working well under pressure in stressful situations, as well as the way he interacts with patients, community, and coworkers effectively and professionally, always demonstrating a willingness to serve.

“It is my honor to recognize Elijah for his dedication to the department and the public,” said Fire Chief Kazuo Todd, thanking the Aloha Exchange Club for honoring McDaniel.

“His work ethic and willingness to pitch in when needed are a credit to his upbringing. The community of North Kohala is blessed to have him serving as a paramedic.”

Also attending the ceremony and recognized were 2020 Office of the Year Joshua Willing and 2019 Firefighter of the Year Battalion Chief William Bergin. Due to Covid, public ceremonies were not held for the past two years to honor the recipients.