Video courtesy Tropical Visions Video and NPS. A synthesized voice was utilized in the narration for this story.

HAWAIʻI VOLCANOES NATIONAL PARK - Active lava within a molten lake is seen feeding a cascading falls into a swirling pond. 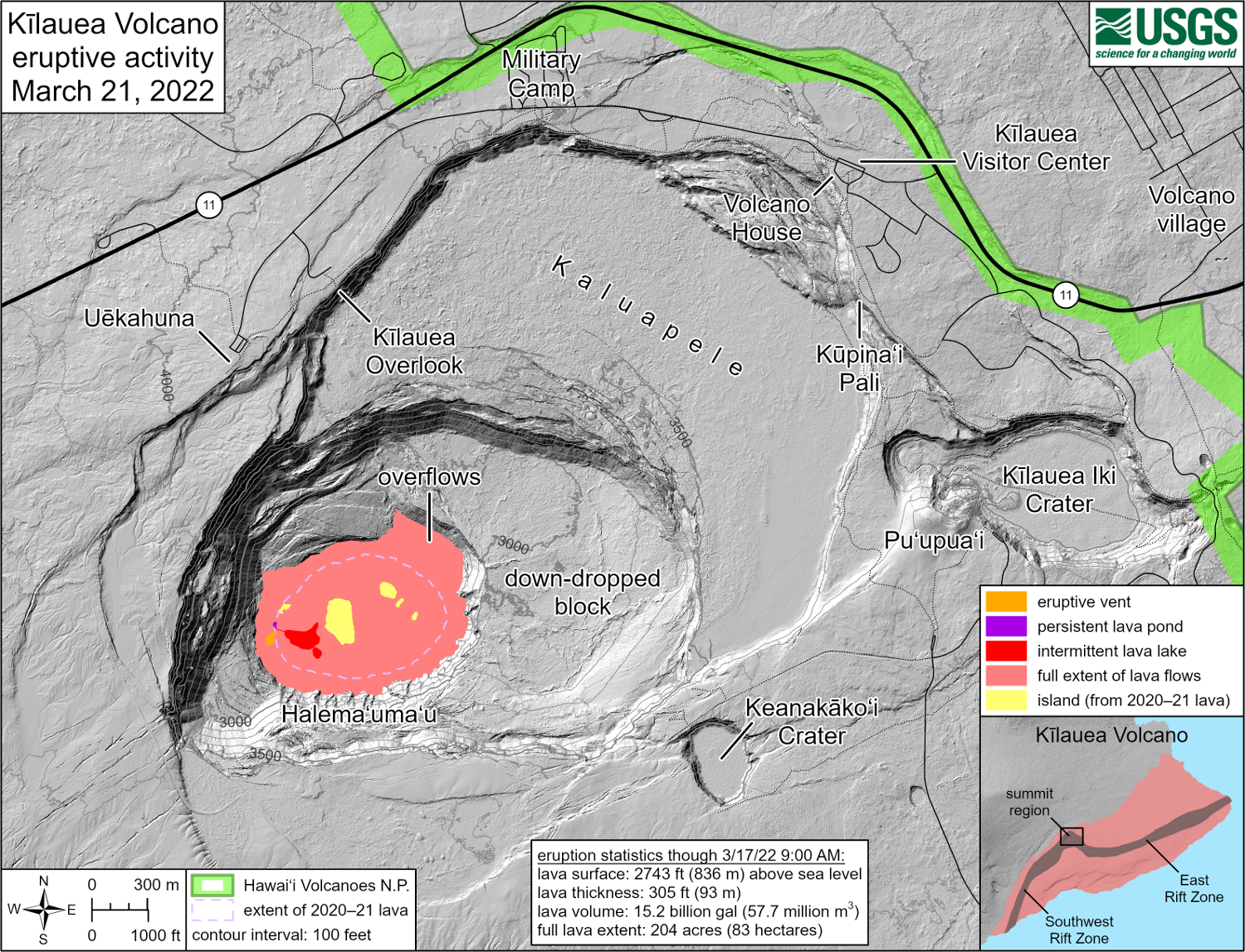 USGS: “This reference map depicts the ongoing Kīlauea summit eruption on March 21, 2022. One eruptive vent is intermittently active within Halema‘uma‘u, in the western end of the crater. When this vent is effusing lava, it pours into a lava lake, colored red on this map. During eruptive pauses, the only active lava is within a pond just north of the vent, colored dark purple on this map. The eruption statistics provided here are current as of the last HVO overflight on March 17, 2022; the volume-averaged surface of the whole lava lake was approximately 2,743 ft (836 m) above sea level at that time. When the eruption is vigorous, lava is visible from three public visitor overlooks in Hawai‘i Volcanoes National Park: Keanakāko‘i Overlook and KUPINAI Pali (Waldron Ledge) can see the eruptive vent and lava lake, while Kīlauea Overlook can occasionally see lava ooze-outs in the southeast part of the crater. “

(BIVN) – Kilauea continues to erupt at its summit within Hawaiʻi Volcanoes National Park. Although the nearly six-month long eruption (correction) has been characterized by an on-and-off pattern of lava effusion, in recent weeks the volcano has been active, more often than not.

The vigor of the eruption has also appeared to increase in recent days, with numerous and sustained oozeouts along the margins and interior seams of the crater floor.

The area of active lava on the crater floor has been putting on a show, with a molten lake feeding a cascading falls into a swirling circle, where the lava appears to be swallowed back down by the volcano.

Video recorded high above the summit by Tropical Visions Video shows the eruption as it appeared on March 24. Scientists say that since the beginning of this event on September 29, 2021, the crater floor has seen a total rise of about 89 meters, or 292 feet. The volume of lava effused in that time is calculated to be about 58 million cubic meters – or 76 million cubic yards.

The alert level for the volcano remains at WATCH, with all recent activity confined to the crater. There are no indications of activity migrating elsewhere on Kīlauea.