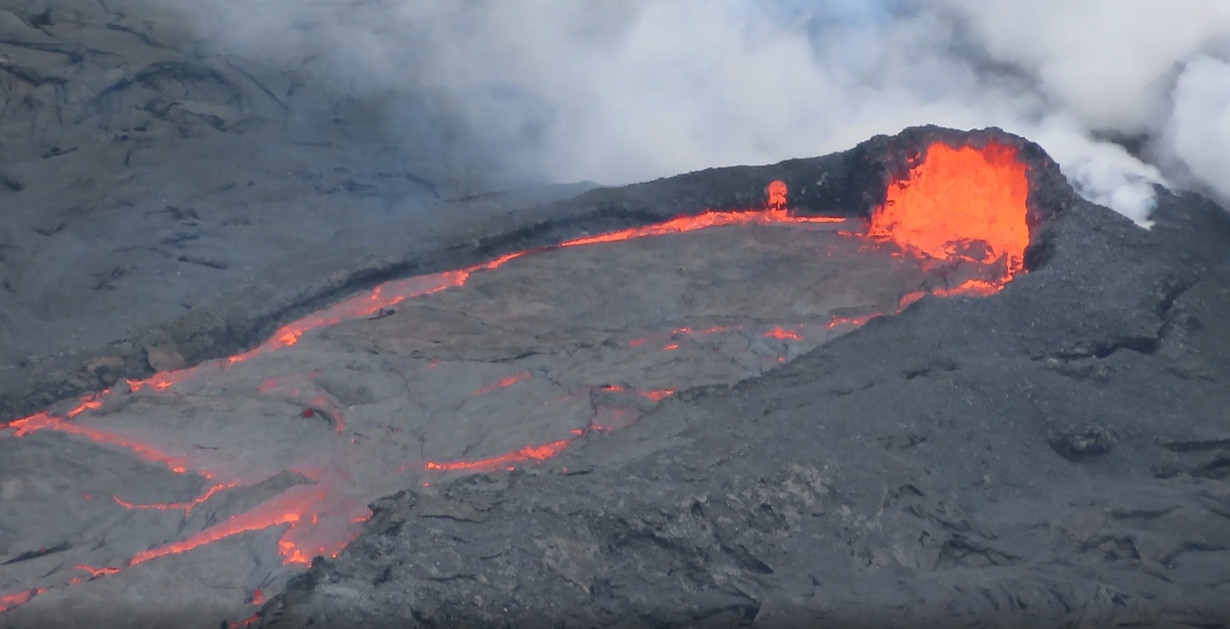 USGS: "Activity continues in Halema‘uma‘u crater, at the summit of Kīlauea. Today, spattering was present at the margin of the active lava lake, along with lava pouring from a small cone in the northeast portion of the crater floor." (USGS image by M. Patrick on March 29, 2022) 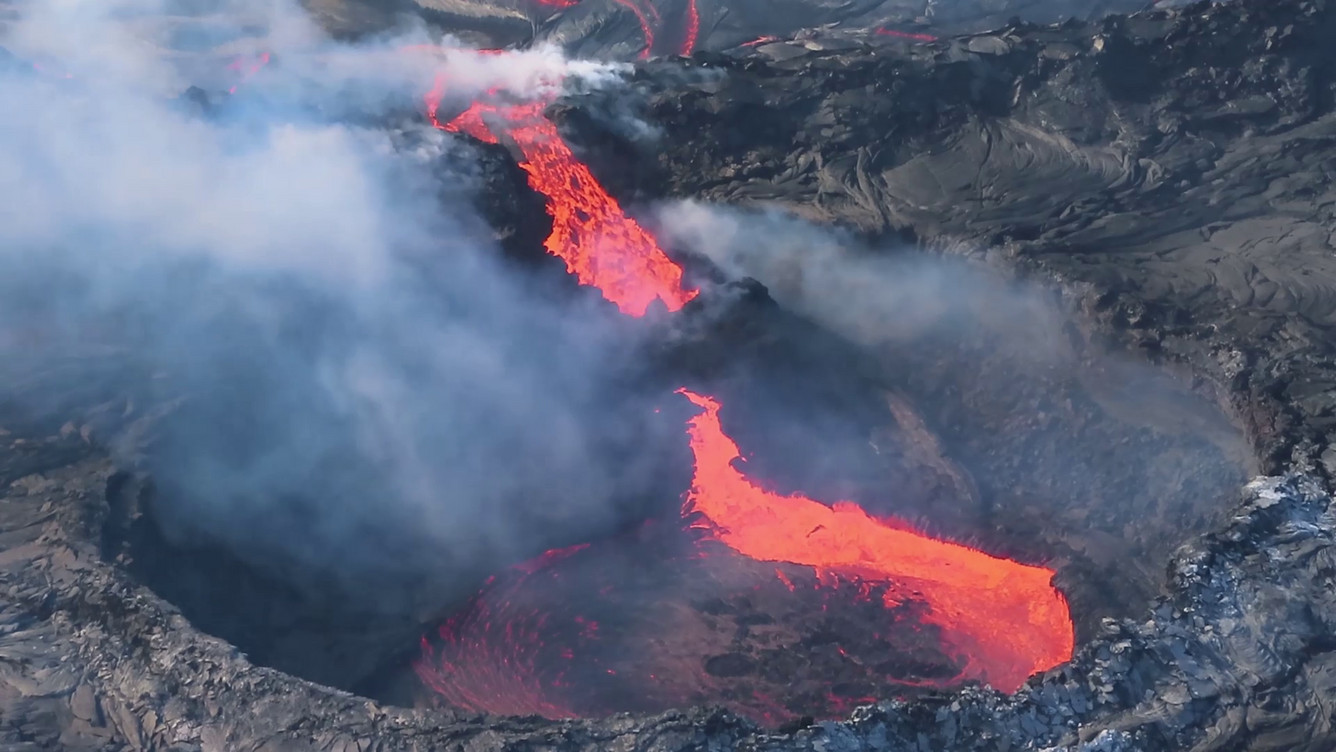 USGS: “The summit eruption in Halema‘uma‘u crater, at the summit of Kīlauea, continues with lava lake activity. This photo, taken on March 24, 2022, shows lava from the main lake pouring into a smaller lake in the western portion of the crater.” (USGS image by M. Patrick.)

(BIVN) – The USGS Hawaiian Volcano Osbervatory today released some new views of the ongoing eruption at the summit of Kīlauea, showing the evolving activity within Halemaʻumaʻu crater.

Scientists issued another activity update on Wednesday morning, saying the eruption has remained confined to the summit crater within Hawaiʻi Volcanoes National Park, and there are no indications of activity migrating elsewhere on Kīlauea.

Halemaʻumaʻu Lava Lake Observations: Eruption of lava from the western vent into the active lava lake (approximately 2.5% of the crater floor surface) and onto the crater floor continued over the past 24 hours. Numerous and sustained oozeouts along the margins and interior seams of the crater floor continued, but showed decreasing activity. Since the beginning of this eruption on September 29, 2021, the crater floor has seen a total rise of about 96 meters (315 feet). The volume of lava effused since the beginning of this eruption was approximately 64 million cubic meters (84 million cubic yards or 17 billion gallons) as measured on March 29, 2022. 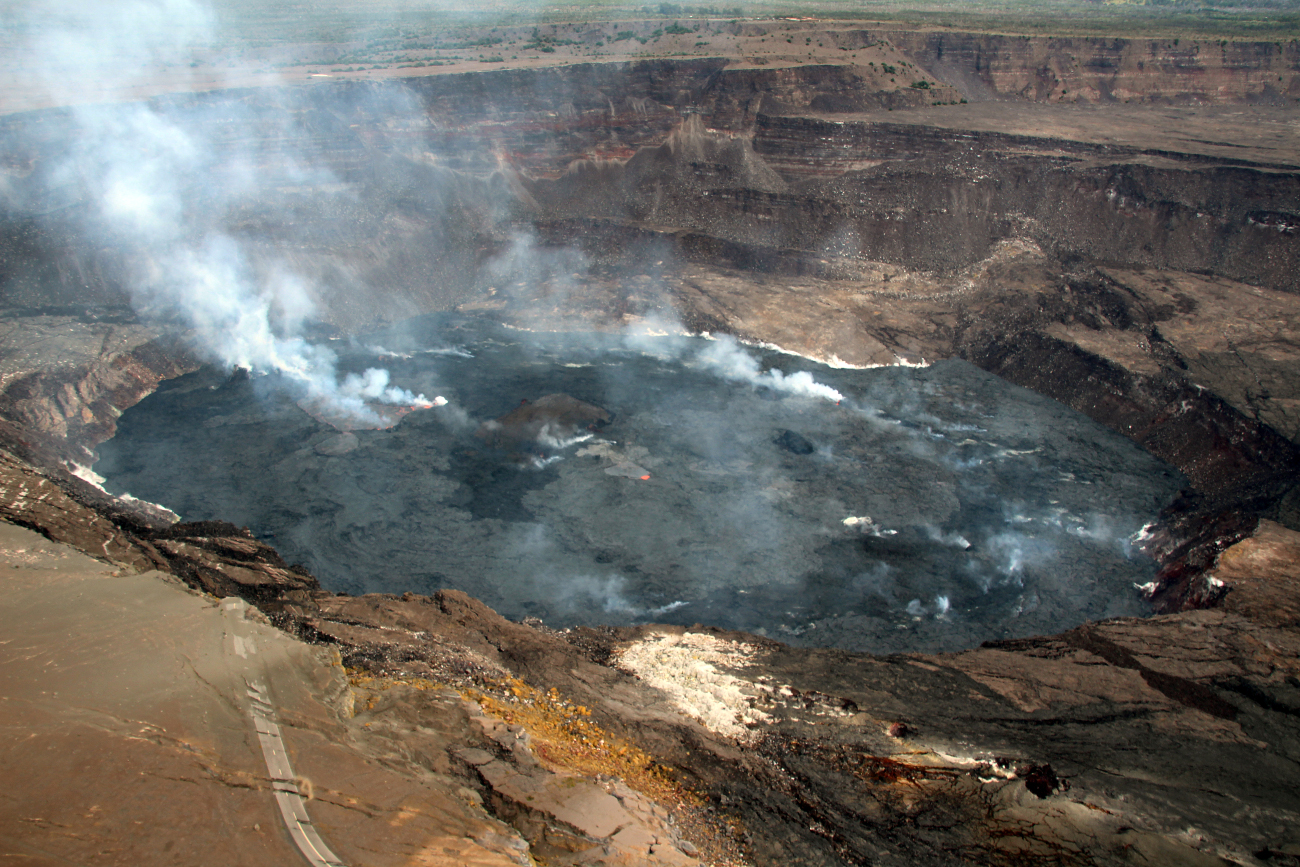 USGS: “A photograph taken during a helicopter overflight on the morning of March 29, 2022, shows an overview of Halema‘uma‘u looking northwest. The active lava lake is visible on the left, and a small lava flow east (right) of the main island is apparent in the center. Much of the crater floor is dark grey to silvery (as opposed to black), indicating it has been recently been covered by lava flows, mostly likely from large sustained oozeouts occurring over the past five days. In the foreground to the left, Crater Rim Drive (closed to the public) is visible—this portion of the road previously led to the Halema‘uma‘u Overlook parking lot, which was destroyed during the 2018 Kīlauea summit collapse.” (USGS image by N. Deligne)

Summit Observations: Summit tilt has been mostly stable, with an overall minor deflationary trend over the past 24 hours. Volcanic tremor remains above background levels. A sulfur dioxide (SO2) emission rate of approximately 1,400 tonnes per day (t/d) was measured on March 23, 2022.