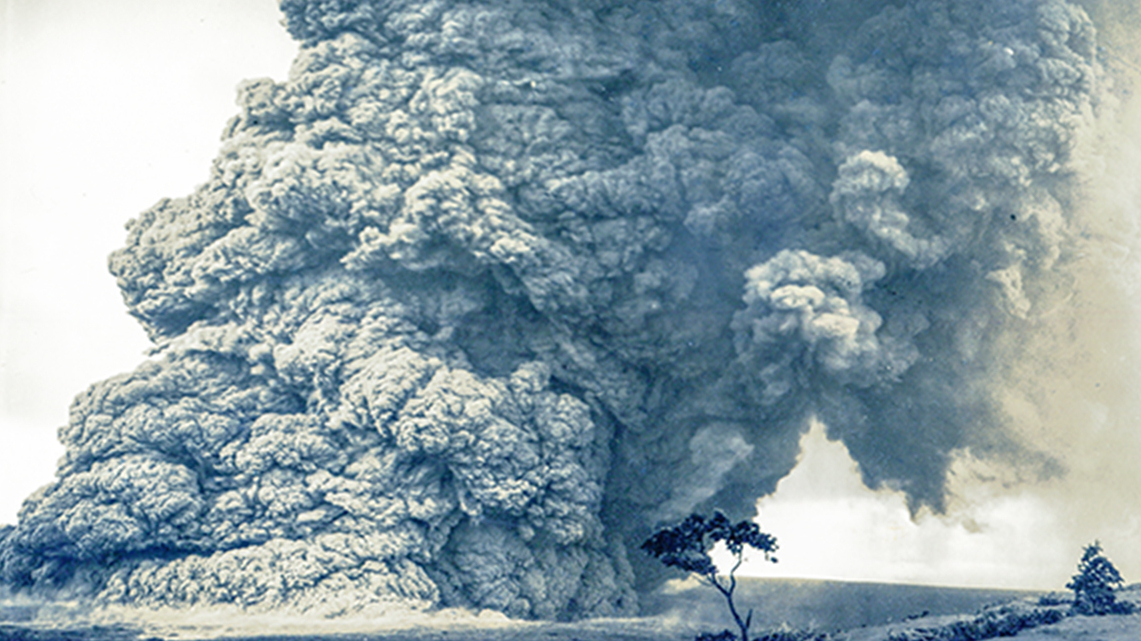 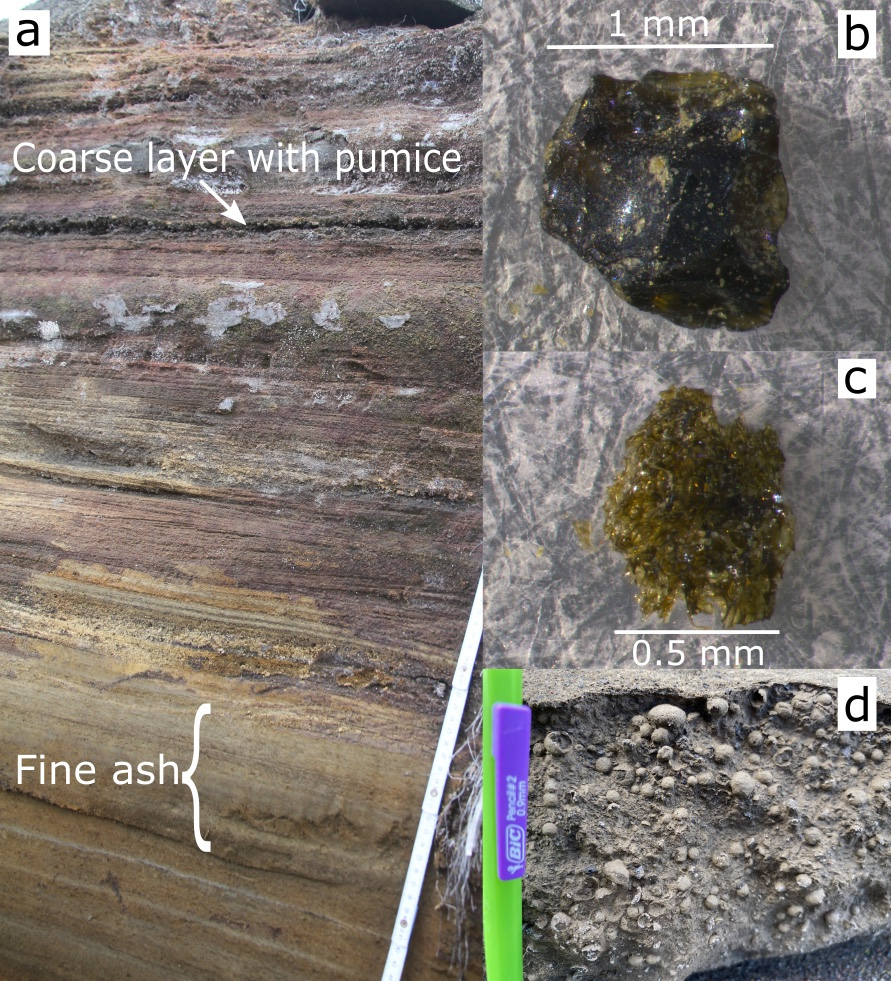 USGS: “Keanakākoʻi Tephra from unit D in Kīlauea south caldera wall; the lower portion of the tephra deposit has been smoothed with a scraper tool, making the surface look different from the portion above. a) finely laminated ash layers as well as a fine ash layer and a coarser layer with pumice grains, b) microscope photo of a dense, glassy ash grain from the fine lamination layers, c) microscope photo of a small pumice grain from the coarser layer, and d) well-preserved example of a fine ash layer with accretionary lapilli.” (USGS photos by J. Schmith)

(BIVN) – As the eruption of Kīlauea volcano continues at the summit with the effusion of lava confined to Halemaʻumaʻu crater, scientists are writing about the clues that paint a picture of the volcano’s explosive past.

This week’s Volcano Watch article was written by Johanne Schmith, a visiting scientist funded by the Carlsberg Foundation:

I think the Island of Hawaiʻi is one of the most magical places on Earth. You can literally see land in the making when one of the volcanoes is erupting. But the familiar sight of red-glowing lava flows makes it hard to imagine a time when eruptions were different, and to think that such a time may come again someday.

I go to the summit of Kīlauea most weeks to study the extent, thickness, and physical characteristics of a 400–500-year-old tephra deposit, the product of explosive eruptions and part of what is called the Keanakākoʻi Tephra. The total deposit is up to 10 meters (30 feet) thick along the southern wall of Kīlauea caldera, but it was created by fragment upon fragment of tephra falling to the ground from volcanic plumes rising out of the caldera.

As I work with my measuring stick, sampling kit, and notebook, I look at this timeline set in stone, and I try to envision a time when explosive eruptions were common at Kīlauea summit.

The tephra deposit has many stories to tell. The lowest and therefore the oldest part contains thinly laminated coarse and fine layers of volcanic ash (particles up to 2 mm or 0.08 inches in size). The thin laminations tell me explosions were small, but frequent. I visualize a cone in the caldera that expels small plumes of ash only minutes apart with loud blasts.

I look closer at the tiny individual fragments that make up the layers. They are glassy and dense with straight sides. This is common for ash generated by explosions where hot magma comes into contact with water at the surface of the volcano. So maybe the vent was submerged under a crater lake? I visualize the cone barely poking above the water surface.

Above the laminations the deposit changes. Several centimeters (a couple of inches) of fine ash that clumps together in 3–5 mm (0.12–0.20 inches) spheres—accretionary lapilli! The finer size of the ash suggests that the explosions got more intense, tearing the magma apart more efficiently, and the clumping is often associated with wet air. I visualize a denser plume rising from the vent with a louder blast. Does the water vapor come from the crater lake that I was imagining? Or was it raining?

If I had been at this very spot at the time of the explosions, the air would have been thick with ash. Breathing would have been difficult, if not impossible. Later, the fine ash would have been picked up by the wind, scratching my eyes and irritating my nose and lungs. Little time elapsed between the smaller explosions and these more intense ones, because all the fine layers are intact and have not been disturbed by wind erosion, which would likely happen within hours or a few days at Kīlauea summit.

The laminated layers return above the fine ash, so the intensity of the explosions went back down, but then another change happened. Not only ash, but also larger, dense, glassy grains (2–6 mm, 0.08–0.24 inches) appear in a coarser layer about 20 mm (0.79 inches) thick, as does a new component: pumice!

Pumice was long thought to only come out of highly explosive volcanoes like Mount St. Helens—but here it is at Kīlauea! Pumice grains are pieces of broken magma foam that forms by intensive bubbling of magmatic gas before eruption. Pumice is very different in nature from those dense fragments that make up the rest of the deposit, so why is it here?

Pumice can be generated in lava fountains, so maybe a fissure opened outside the crater lake? But then why are the dense grains getting larger at the same time? Was the magma rising faster through the water, resulting in less time for interaction? Or did Kīlauea supply more magma to the eruption generating a higher plume? I know I can’t answer those questions from this one location alone. I need to see how the different layers are distributed in the area around Kīlauea caldera.

So, after measuring, sampling, sketching, and making notes about the Keanakākoʻi Tephra deposit at this site, I continue my journey to other locations hoping to unlock more secrets of Kīlauea’s explosive past.