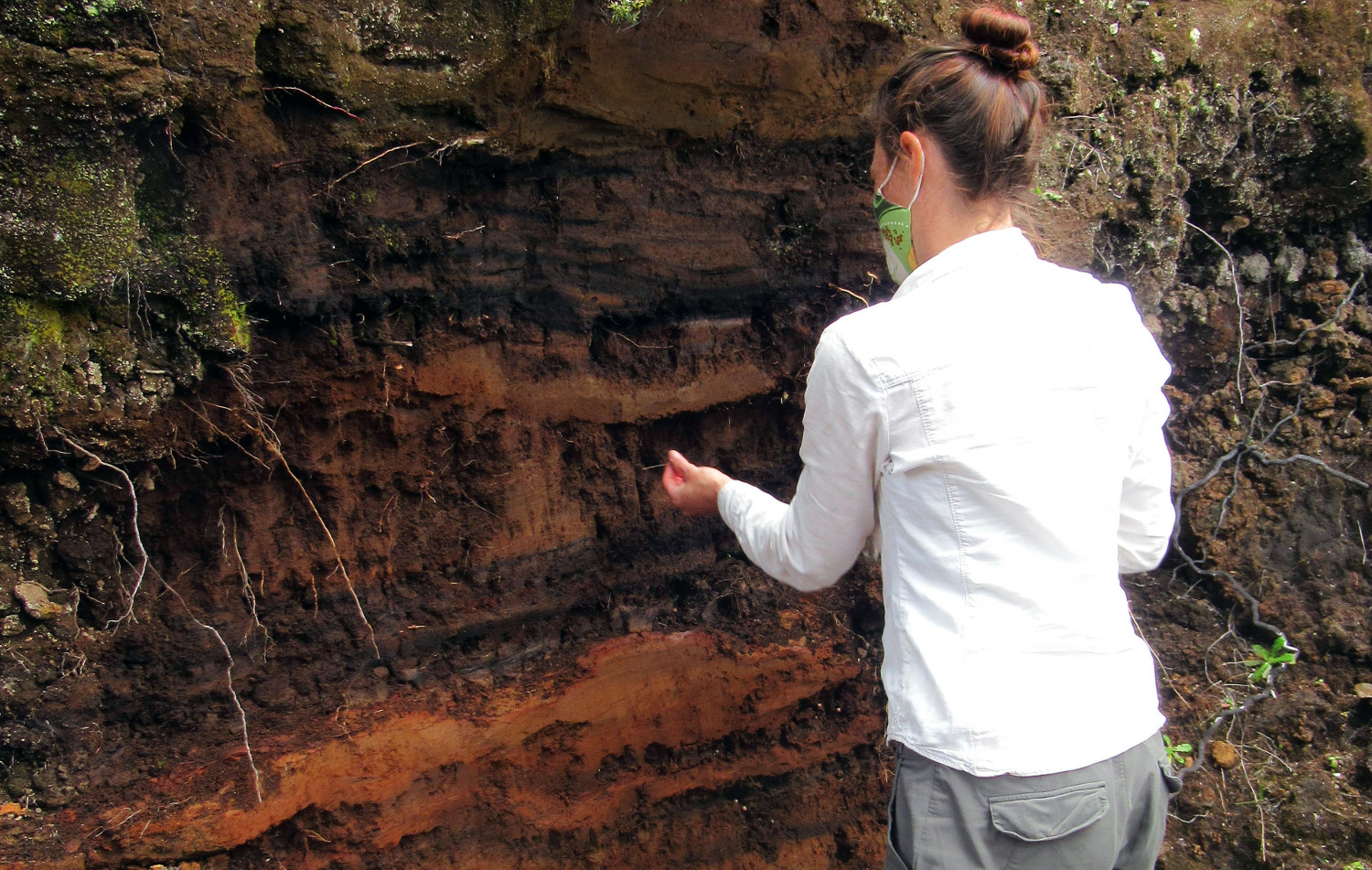 USGS: "A geologist examines a two-meter-thick (7 feet) tephra outcrop on the southeast flank of Mauna Loa." (inset of USGS photo by J.M. Chang)

(BIVN) – The eruption of Kīlauea volcano continued at the summit on Saturday, with surface activity in the active lava lake, as well as lava is flowing on the crater floor from the lake and west vent region.

This week’s Volcano Watch – a “geologic whodunnit” written by Hawaiian Volcano Observatory postdoctoral researcher Julie Chang – delves into the detective work involved in determining the source of erupted material on the Big Island:

Mauna Loa and Kīlauea are the two most active volcanoes on the Island of Hawai‘i, and they have overlapping eruption histories. They are located in close proximity, with their summit craters only about about 34 kilometers (21 miles) apart. In fact, part of Kīlauea is built on the southeast flank of Mauna Loa, which is the older of the two volcanoes.

Both volcanoes produce lava flows that can travel many miles from the volcanic vent. Additionally, they produce tephra (material ejected explosively) that can be erupted high into the atmosphere and travel long distances by wind. With this in mind, it can sometimes be difficult to determine, with the unaided eye, which volcano is responsible for a specific lava flow or tephra layer.

Knowing the source of the erupted material, whether from Mauna Loa or Kīlauea, is important for assessing volcanic hazards on the island. Geologists look to past eruptions, both effusive (in the form of lava flows) and explosive (in the form of volcanic ash and other tephra) to understand the frequency of volcanic eruptions. Recurrence intervals can be calculated to determine how often effusive or explosive events occur, which can help forecast when they may occur in the future.

This means that an explosive eruptive event occurred, on average, every 200 years within that 1,200 year time period. If we know that there are six tephra layers, but we donʻt know if they erupted from Mauna Loa or Kīlauea, it is difficult to understand how often eruptions occurred from the individual volcanoes.

So how, then, do geologists determine which volcano produced a certain flow or tephra? Field geologists often use detailed mapping. An explosive eruption, for example, will generally have thicker deposits near the source and thin out away from the source.

Geologists can also use geochemistry to determine if a particular eruptive product is from Mauna Loa or Kīlauea. Studies have shown that the two volcanoes have different geochemical signatures. For example, Mauna Loa lavas generally have higher silica (Si) and lower calcium (Ca), titanium (Ti), and potassium (K) at a given magnesium (Mg) content than Kīlauea lavas.

The two volcanoes and their older predecessors generally have different trace element concentrations and isotope signatures as well, with the geochemistries defining two different families along the island chain. On the Island of Hawaiʻi, Mauna Loa and Hualālai form one family, and Kīlauea, Mauna Kea, and Kohala form another. The chemical differences are thought to originate in the hotspot plume and demonstrate that the magma systems for the two volcanoes are not interconnected.

A new study is applying these geochemical differences between Mauna Loa and Kīlauea to understand the volcanic source of individual layers within a two-meter-thick (7 feet) tephra exposure on the southeast flank of Mauna Loa. The exposure is located approximately 19 kilometers (12 miles) south of Moku‘āweoweo, the summit caldera of Mauna Loa, and 35 kilometers (22 miles) southwest of Halemaʻumaʻu, the summit crater of Kīlauea. Due to varying wind directions, either volcano could potentially be the source of the tephra.

Initial geochemistry obtained from fresh glass shards found in the tephra layers suggests that tephra from both Kīlauea and Mauna Loa are present at the field site. Tephras from both the Keanakākoʻi Ash (circa 1500–1820 CE) and the Kulanaokuaiki Tephra (circa 400–1000 CE), which erupted from Kīlauea, appear to be present, as well as at least one tephra layer from Mauna Loa.

The new data will be important for constraining recurrence interval calculations for explosive events on Mauna Loa and Kīlauea and will help the USGS Hawaiian Volcano Observatory provide more robust hazard assessments for the Island of Hawaiʻi.