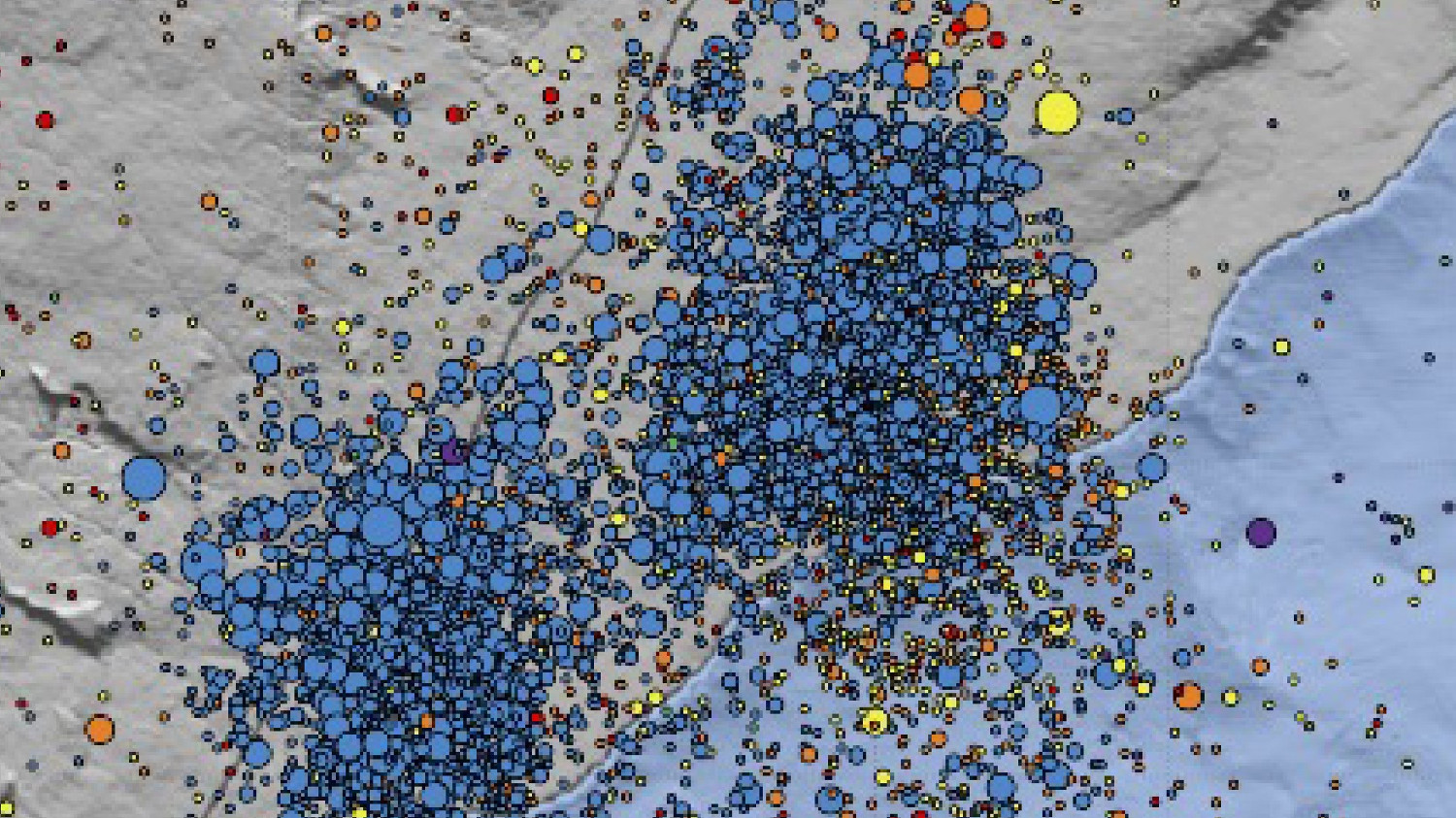 PĀHALA, Hawaiʻi - The area deep below ground in Kaʻū is currently the most seismically active region of the Hawaiian Islands. 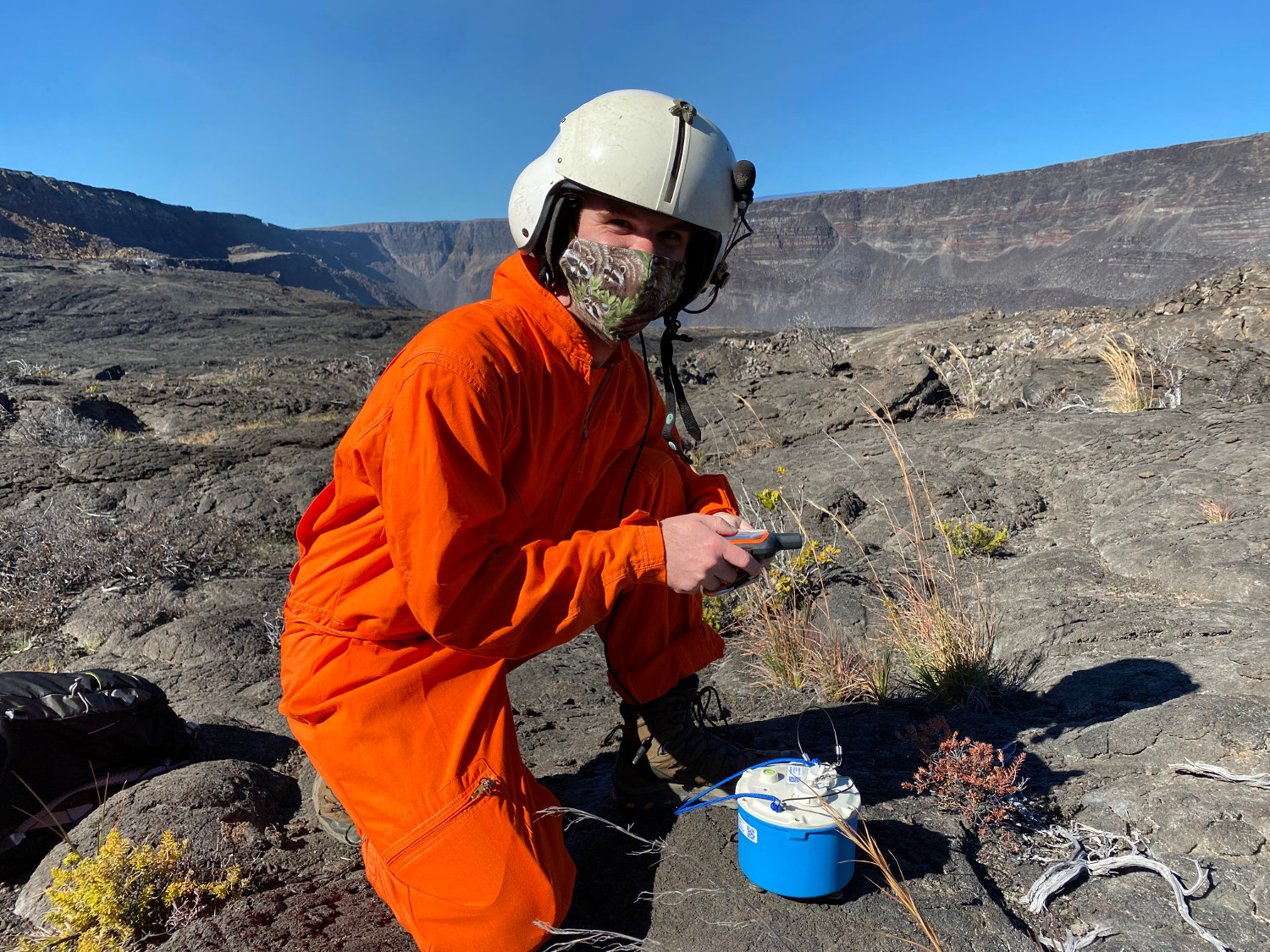 USGS: “HVO field crews deployed a dense network of temporary seismic instruments at Kīlauea’s summit on January 1, 2021, and with permission from Hawai‘i Volcanoes National Park. The temporary instruments supplement data already being collected by HVO’s permanent seismic network and will help to track the migration and storage of magma in the shallow volcanic plumbing system beneath the surface of Kīlauea’s summit. HVO field crews accessed the down-dropped block that formed during Kīlauea’s 2018 summit collapse events via helicopter in order to deploy two of the temporary seismic instruments there.” (USGS image J. Chang)

(BIVN) – The ongoing swarm of earthquakes located deep beneath the area of Pāhala in the Kaʻū region of Hawaiʻi island is the subject of this week’s Volcano Watch article, written by U.S. Geological Survey Hawaiian Volcano Observatory scientists and affiliates.

Deep beneath Pāhala, a town located in the southern part of the Island of Hawai’i, is currently the most seismically active region of the Hawaiian Islands. Frequent, deep earthquakes (greater than 20 km or 12 miles below sea level) are felt regularly by local residents, and, occasionally, people across the entire island.

However, the current level of activity was not always common to the region and USGS Hawaiian Volcano Observatory (HVO) researchers are interested in trying to understand more about why it is happening. 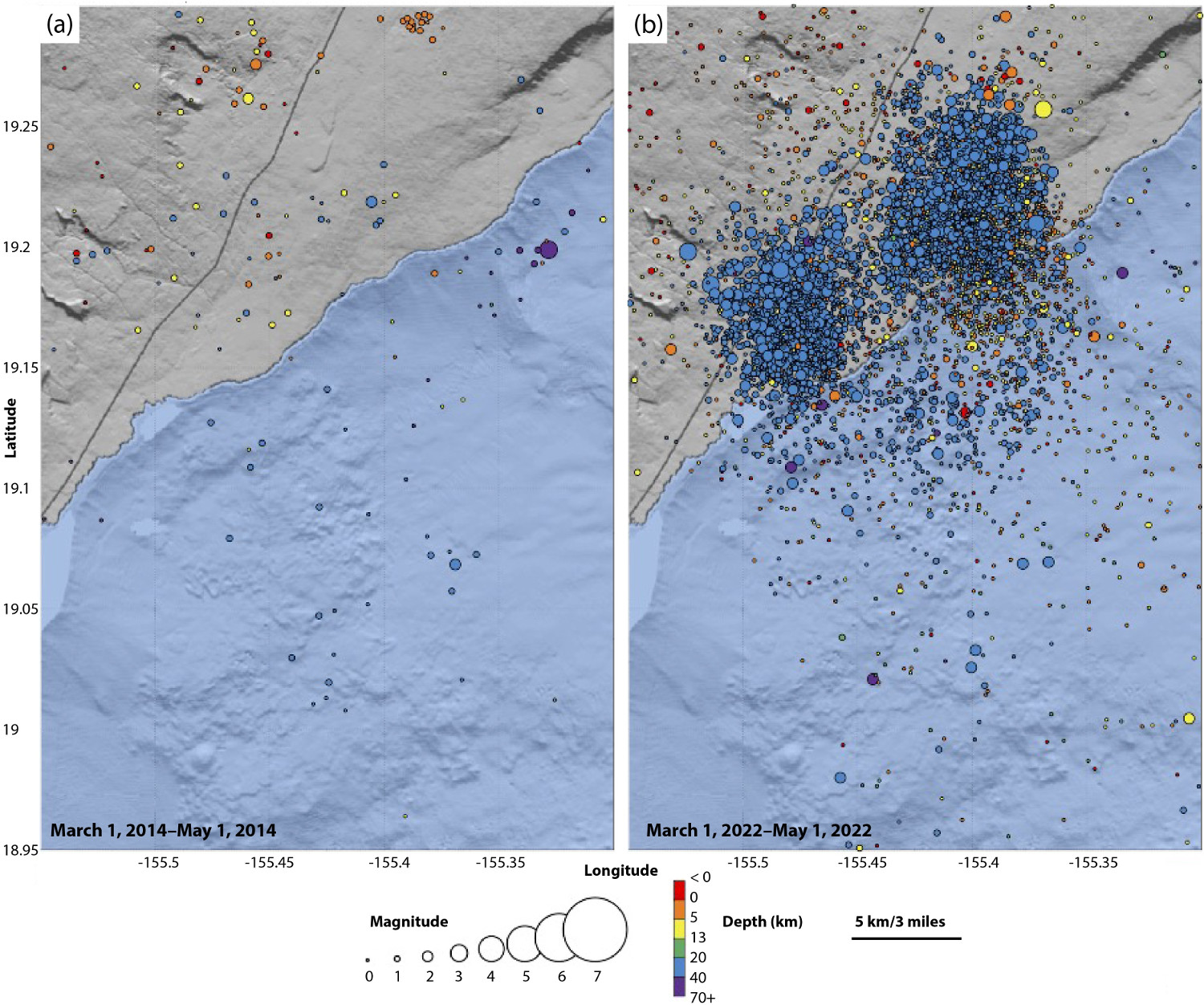 Since August 2020, larger-magnitude earthquakes have also begun to occur deep beneath Pāhala. Eight magnitude-4.2-to-4.6 earthquakes, at depths of 31–34 km (19–21 miles) have been recorded. These larger events have been reported felt by people on the Island of Hawai’i as well as nearby Hawaiian Islands.

HVO, in collaboration with the University of Hawai’i at Mānoa (UHM), will begin an investigation this summer to learn more about the nature of these frequent, deep earthquakes beneath the southern part of the Island of Hawaiʻi.

This summer, HVO and UHM scientists—funded by the Additional Supplemental Appropriations for Disaster Relief Act of 2019 (H.R. 2157)—will hike across the Pāhala region, deploying instruments called seismic nodes that will help to us to understand why these earthquakes are occurring. Seismic nodes are light, compact seismometers that measure ground shaking at the location where they are placed.

Unlike permanent seismic stations, which are placed farther apart and cover the entire Island of Hawai’i, the temporary seismic nodes will be tightly grouped in order to more densely record earthquake signals across the region surrounding Pāhala. For two months, these nodes will record ground shaking generated by shallow and deep earthquakes occurring across the Island of Hawai’i as well as distant earthquakes from around the world.

The densely-spaced nodal instruments recording earthquakes over a wide range of depths and locations during this experiment will collect seismic data from below the Pāhala region at unprecedented resolution. Seismologists at HVO and UHM will analyze data collected from these seismic nodes to create images of the structure of the Earth beneath Pāhala from as great as 40–50 km (25–31 miles) below sea level all the way to the surface.

The data and images will be used to precisely locate the earthquakes in this region and, hopefully, identify or constrain the locations and distributions of shallow and deep fault zones and potential magma pathways within the region. Together, the results will help us to understand what is causing the frequent earthquake activity deep in the region beneath Pāhala.

We plan to share the results of this project after the data are processed. In the meantime—if you are in the Pāhala area this summer, please watch out for seismic nodes that are recording valuable data to help HVO shed light on the mystery of frequent earthquake activity deep below.