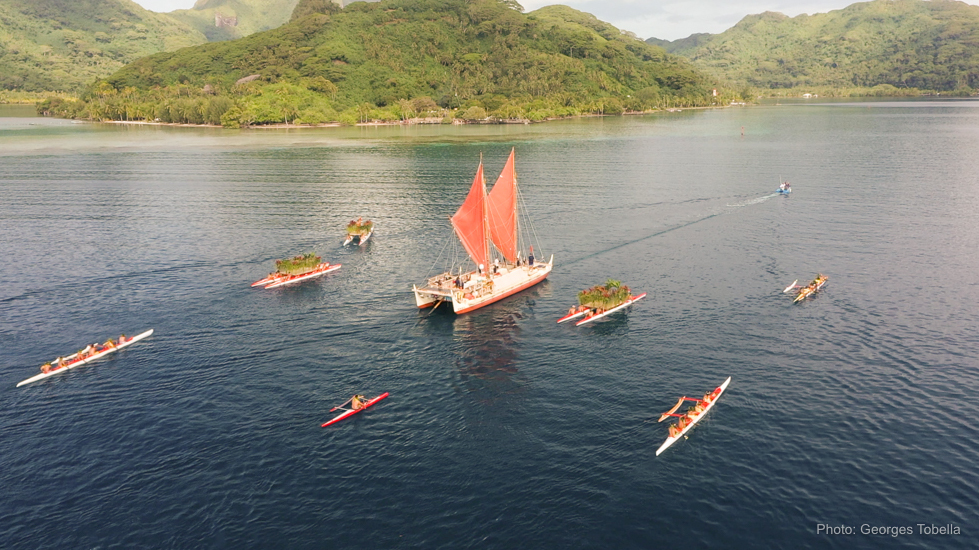 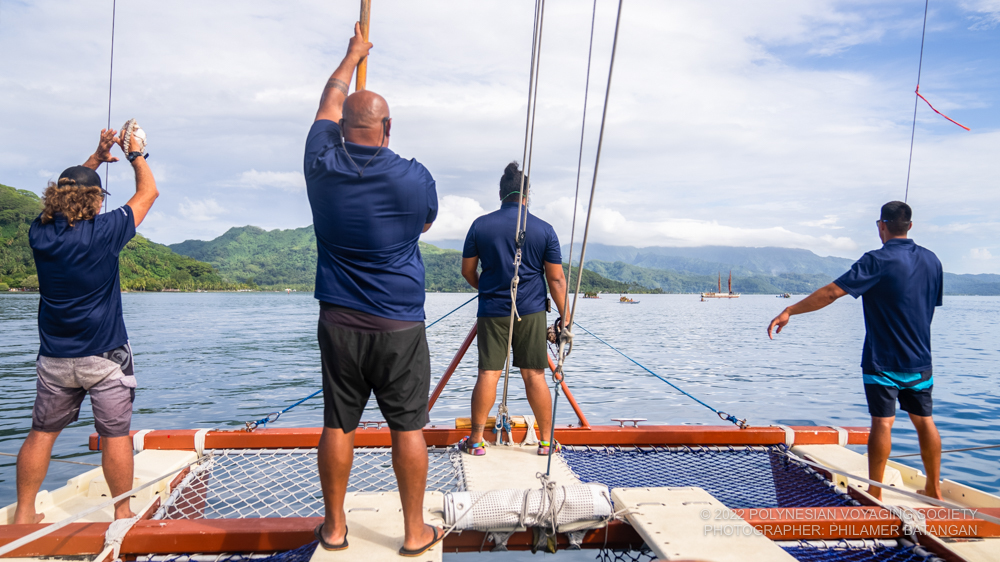 (BIVN) – The iconic Hawaiʻi voyaging canoes Hōkūleʻa and Hikianalia were welcomed to Taputapuātea on Tuesday morning.

Taputapuātea is “the location of an ancient marae that was once considered the central temple and religious center of Eastern Polynesia,” says the Polynesian Voyaging Society. “Established around 1000 AD, the marae was a place of learning where priests and navigators from all over the Pacific would gather to offer sacrifices to the gods and share their knowledge of the genealogical origins of the universe, and of deep ocean navigation.”

From the Polynesian Voyaging Society:

Hawaiʻi’s voyaging canoes Hōkūleʻa and Hikianalia were welcomed by local dignitaries, spiritual elders and community members on Tuesday morning at Marae Taputapuātea, the center of the Polynesian Triangle, located on the southeastern coast of Raʻiātea in French Polynesia. The purpose of the stop was to honor the ancient protocol of Hawaiʻi’s Polynesian ancestors who would go to Taputapuātea, the spiritual center for voyagers, to ceremonially launch and close their voyages.

Taputapuātea’s cultural elders conducted highly sacred ceremonies to affirm the Kealaikahiki sea road between Hawaiʻi and Tahiti and to consecrate Hōkūleʻa and Hikianalia as sacred vessels of heritage to carry the mana (spirit) of Polynesia throughout the vast Pacific on the Moananuiākea Voyage, which will start the spring of next year. 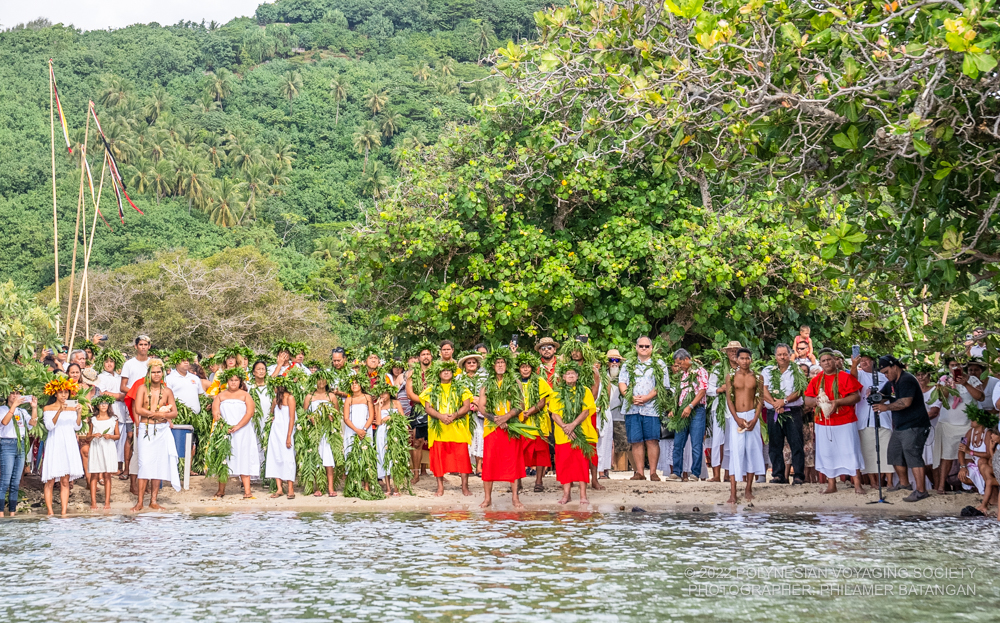 The arrival ceremony began with the exchange of conch shell blows between the crew and the Taputapuātea elders who then lifted the tapu (kapu) allowing the canoes to enter the lagoon of Taputapuātea via the sacred pass of Teavamoʻa. Before the crew were shuttled to shore from the canoes, they placed two pieces of coral from Hawaiʻi into the water as an offering of gratitude for having guided and protected them throughout the voyage. At the shore line, the crew stood in the water awaiting the invitation to walk onto the beach and then responded with Hawaiian chants and songs as they proceeded to the marae where they presented two stones, one from each canoe, as a sacred offering. After the stone ceremony and ʻawa blessing, the crew walked back out to Oputeina Marae and Hauviri Marae for another ritual. 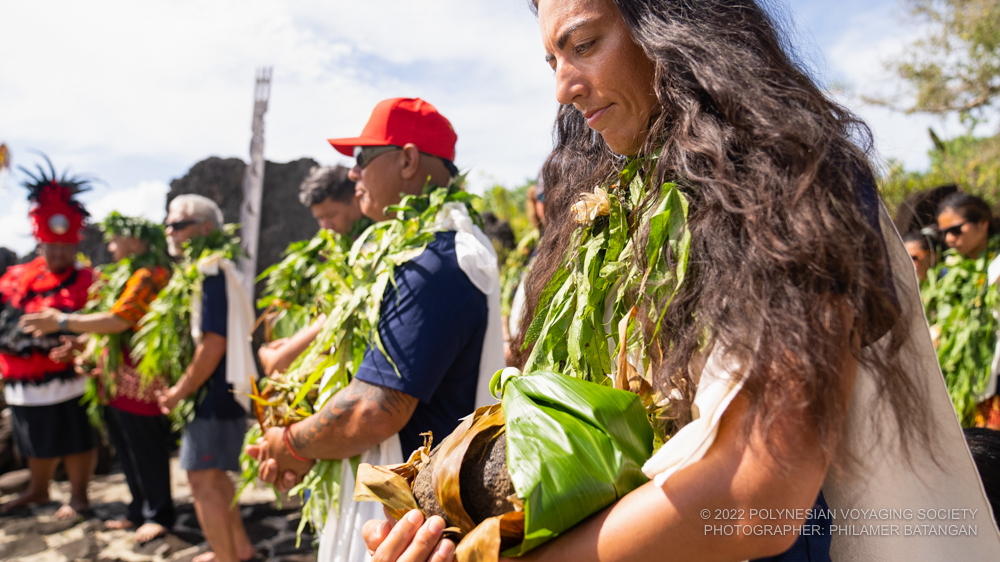 “Receiving the blessing and permission from the cultural elders of Taputapuātea to launch the Moananuiākea Voyage was the most important purpose of the Kealaikahiki Voyage,” said Nainoa Thompson, Pwo Navigator and CEO of the Polynesian Voyaging Society. “This ceremony and connection with our ancestral family reaffirms the purpose for why we sail, why we voyage,” he added.

Since arriving in Papeete, Tahiti almost two weeks ago, the crews have been preparing Hōkūleʻa and Hikianalia for their sail to Taputapuātea before the voyage back to Hawaiʻi. After the engagement with Taputapuatea, the canoes returned to Papeete yesterday where they continue to prepare and provision the vessels for the journey back to Hawaiʻi, which will launch as early as Sunday. 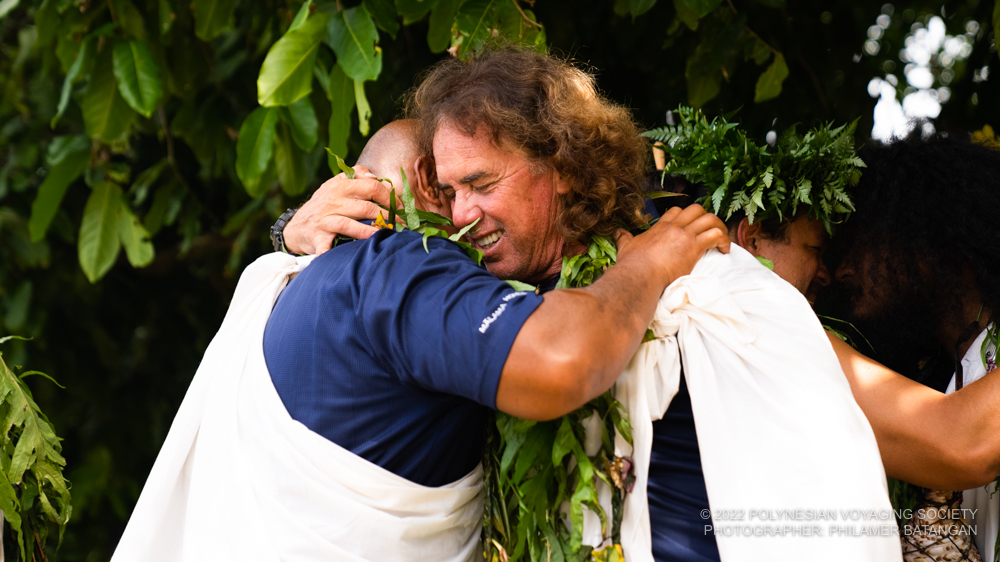 Marae Taputapuātea was designated as a UNESCO World Heritage site in 2017. The Polynesian Voyaging Society notes:

Most significantly, a truce known as the Faatau Aroha was established with the surrounding islands to form an alliance that lasted for many years and perpetuated the growth of voyaging and exploration leading to the discovery and colonization of all the islands of Eastern Polynesia, including Hawaiʻi, Rapa Nui and Aotearoa (New Zealand). New marae were established on each of these islands with a rock being taken from Taputapuātea so that Ra‘iātea served as a spiritual link. However, the Faatau Aroha was broken due to a conflict between two leaders of the alliance that resulted to open warfare and an end to large-scale interisland voyaging.