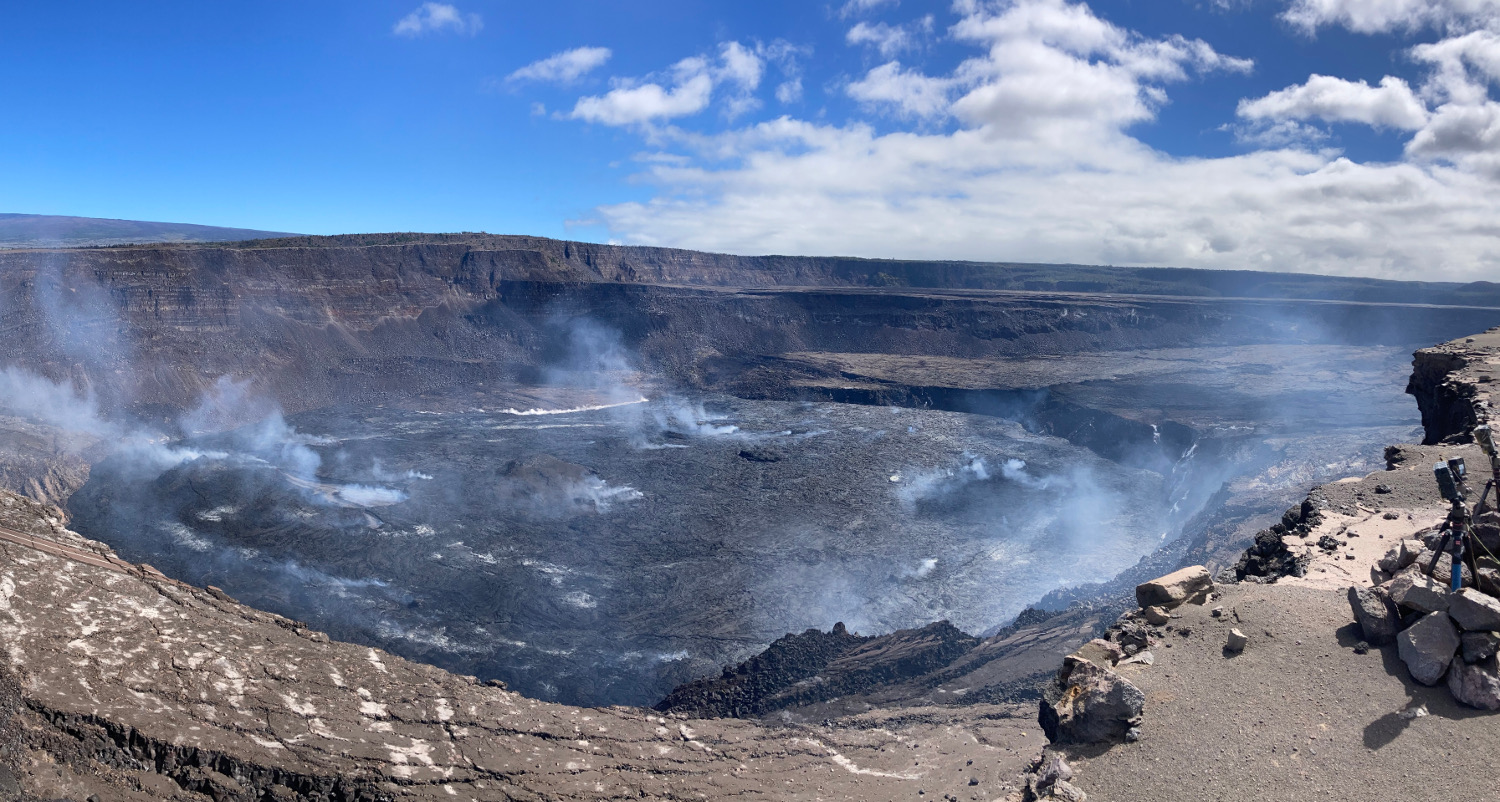 VOLCANO WATCH: The Forgotten Collapse At Kilauea Summit In 1916

HAWAIʻI VOLCANOES NATIONAL PARK - This week, scientists discuss whether or not Kīlauea might experience a similar crater collapse anytime soon. 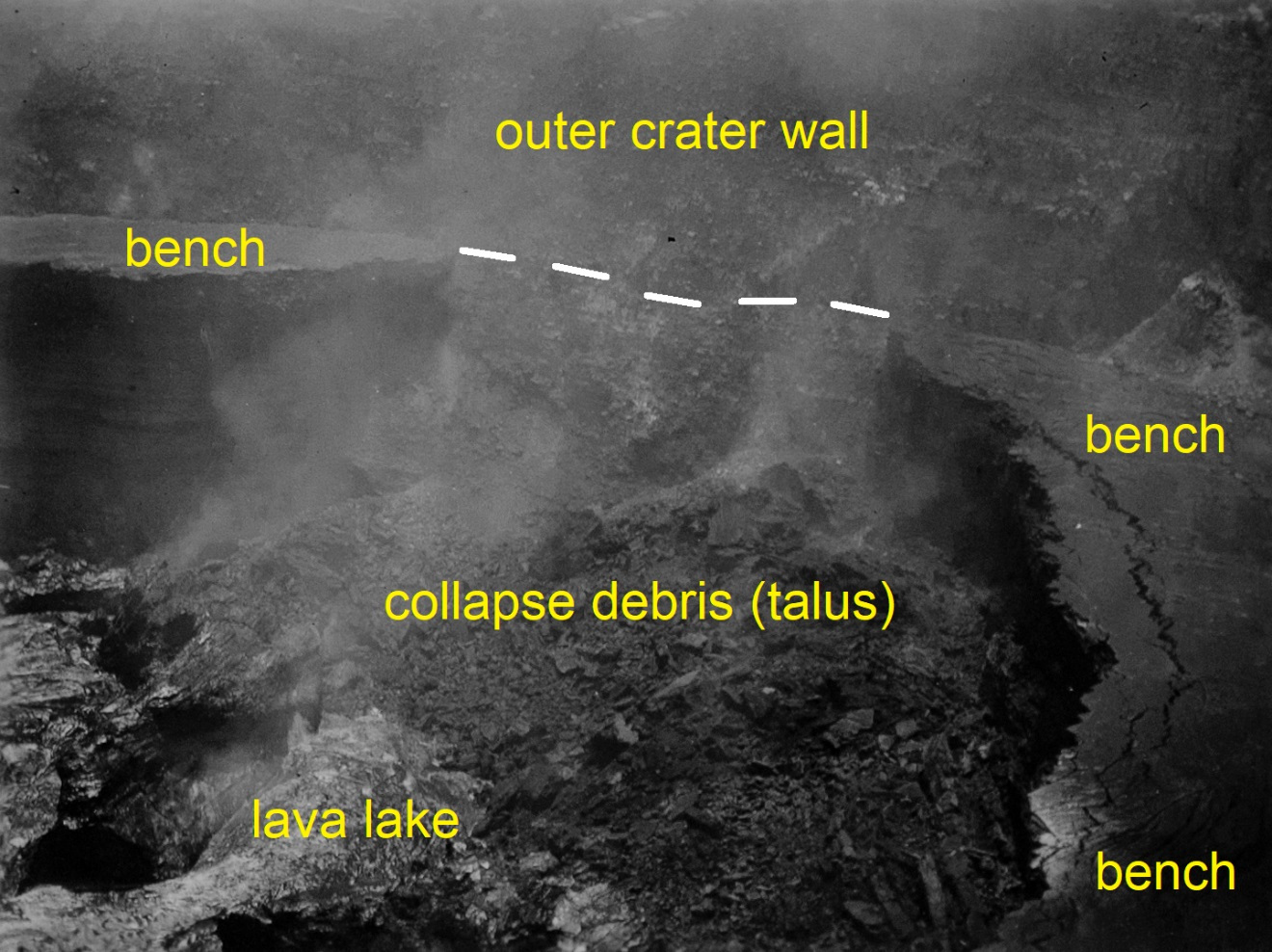 USGS: “View of the walls of Halemaʻumaʻu during the crater collapse of June 5, 1916, looking northeast from the south side of the crater. The lava lake is visible at the lower left, and the outer crater walls are at the top. The crater rim is just out of frame to the top. Within the crater is a bench of lake overflows that marks earlier high-lava levels before the lake began draining; this surface of this bench sat nearly 300 feet (91 m) below the crater rim. A substantial section of the bench has recently collapsed (with a dashed white line marking its former trace), littering talus debris around the edge of the lava lake and exposing the outer crater wall that was previously buried.” (USGS image)

(BIVN) – In this week’s Volcano Watch, scientists take a look back – over a century ago – to the 1916 crater collapse at the summit of Kīlauea.

The passage of time has a way of isolating notable events of the past; present-day historians can easily lose track of individual events in the “fog” of history. Volcanology is no exception, especially when reflecting on the complex eruptive histories of Kīlauea and Mauna Loa, two of the world’s most active volcanoes.

Last month, a “Volcano Watch” article highlighted a lesser-known Mauna Loa eruption that ended May 31, 1916. Hawaiian Volcano Observatory (HVO) staff had to make a quick turnaround a week later when Kīlauea Volcano’s Halemaʻumaʻu crater began to subside. A series of collapse events took place from June 5–7, 1916, and observers described it as one of the most spectacular occurrences they had ever witnessed at Kīlauea. 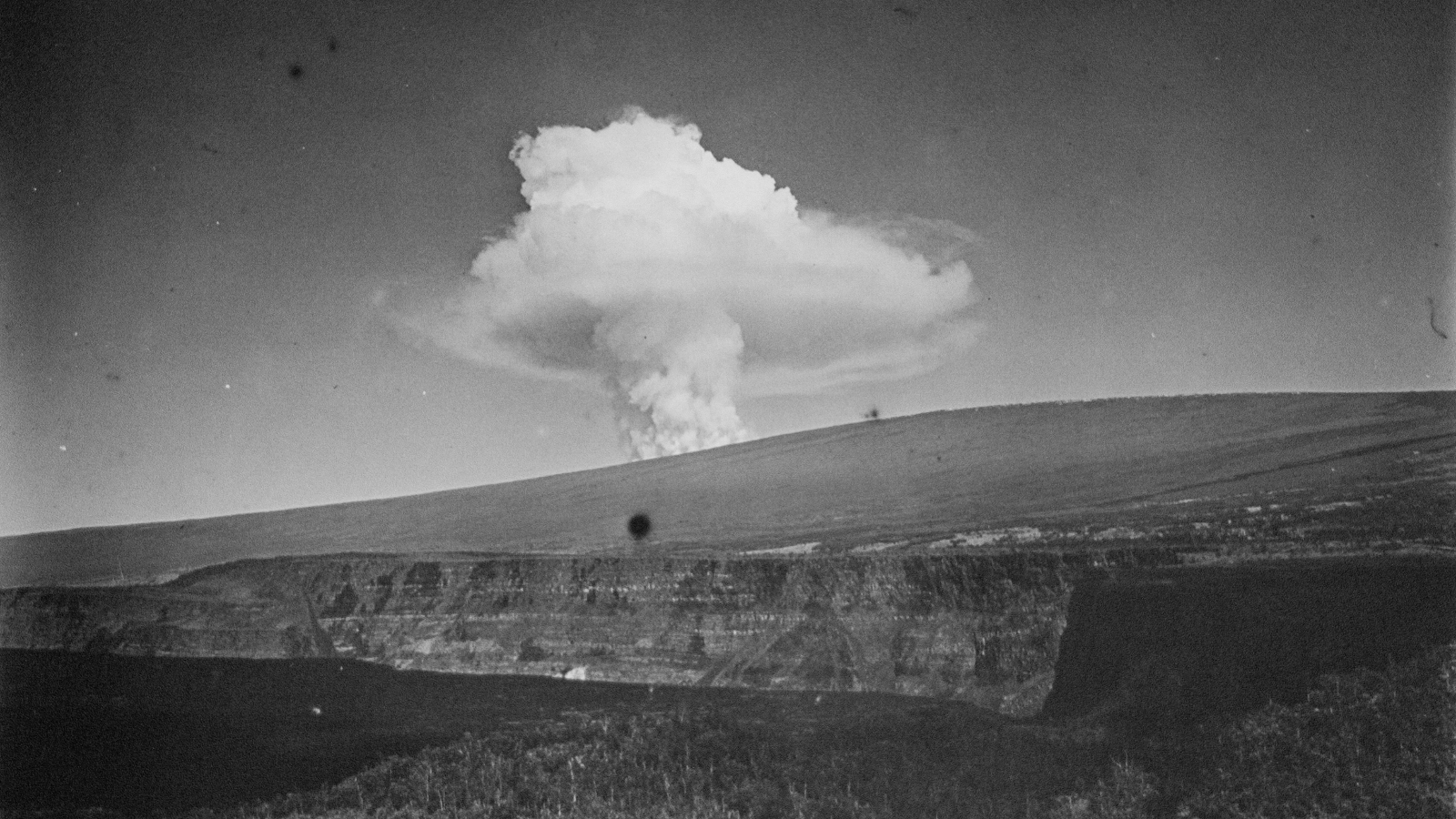 USGS: “Image of the steam plume that accompanied the start of Mauna Loa’s 1916 eruption on the Southwest Rift Zone. View is from within Hawai‘i Volcanoes National Park, with Kīlauea caldera wall visible in the middle of the photo.” (Photograph by H. Wood and courtesy of University of Hawai‘i at Mānoa Hamilton Library)

A decade before these events, a continuous lava lake re-appeared within Halemaʻumaʻu for the first time since a collapse in 1894. Relatively steady lake activity continued—through the 1916 Mauna Loa eruption—until June 5, 1916. That morning, HVO staff were surprised to find the lava lake 40 feet (12 meters) lower than it had been measured the day before, when its surface was 300 feet (91 meters) below the crater rim.

The receding lava formed an inner pit within Halemaʻumaʻu, surrounded by a bench of earlier lake overflows plastered against the outer crater walls. As draining continued, sections of this bench began to “topple” into the still-molten-but-dropping lake.

These collapses sent billowing clouds of earth-colored dust into the air. Sometimes, the crater walls retained a thin veneer of bench material—which alternatively consisted of dark, solidified lava rock and incandescent, partially-molten lava that had not fully cooled under the earlier flow crust.

Fortunately, the collapses did not seriously affect the integrity of the outer crater walls, allowing HVO staff to observe the entire spectacle. As described in HVO’s weekly bulletin at that time:

“Falls from the south inner cliffs became frequent and spectacular, as the bench matter, made of recent overflows, was red hot within, and broke or crumbled like masses of hard cheese. Sometimes this material flowed in a sugary fashion. The great blocks formed an incandescent talus slope below, which spread into a crumbling south promontory.”

These collapses eventually consumed the entirely of the bench on all sides of the lava lake. When these great masses of rock toppled into the molten lake, the lava sloshed back and forth in waves that lapped up the margins by several tens of feet (several meters) vertically. This resulted in constantly changing circulation patterns within the lava lake.

The lava level had dropped another 130 feet (40 m) by midday on June 6. However, the rate and severity of the collapses dramatically slowed, and the last substantial dust cloud from a collapse was observed around 11 a.m. on June 7. Lava began refilling the crater in the days that followed, eventually erasing most of the evidence of the 1916 collapse.

What caused the Halemaʻumaʻu lava lake to drain so quickly in early June 1916? Geophysical monitoring in recent decades has shown that significant summit depressurization is typically associated with intrusion or eruption elsewhere on the volcano, such as along the rift zones. The 2018 summit collapse and lower East Rift Zone eruption stands as an example of this process.

Though HVO did not have an extensive geophysical monitoring network in 1916, a seismometer near the summit of Kīlauea recorded an increased number of distant earthquakes during the collapse. Basic analysis suggested that they may have occurred along one of the rift zones—perhaps indicating magma transport from the summit lava lake, similar to the sequence of earthquakes that accompanied the major 1924 collapse of Halemaʻumaʻu.

With an ongoing summit eruption and lava lake, do we expect Kīlauea to experience a similar crater collapse anytime soon? The simple answer is no. Unlike during the 1916 collapse, the current lava lake is fed by a vent at its side rather than its base. Lacking an effective “drain,” summit depressurization cannot evacuate lava from the crater so easily. The result of the current summit eruption has been to partially fill Halemaʻumaʻu crater, creating crust that is continuously uplifting and expanding to build a new crater floor.