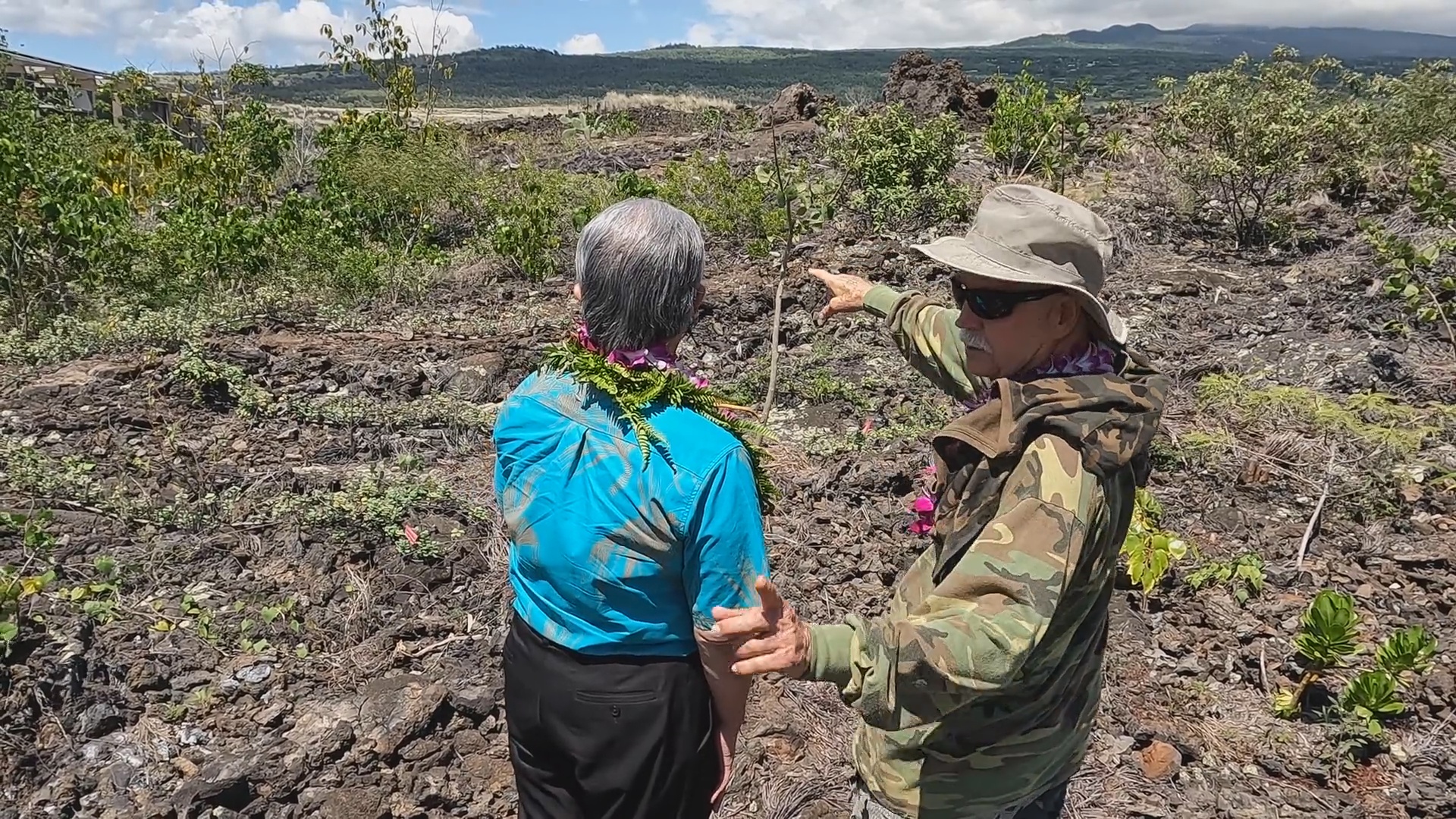 KONA, Hawaiʻi - The Governor got a close-up look at the 706-acre Pālamanui Community College tropical, dryland forest on Friday. 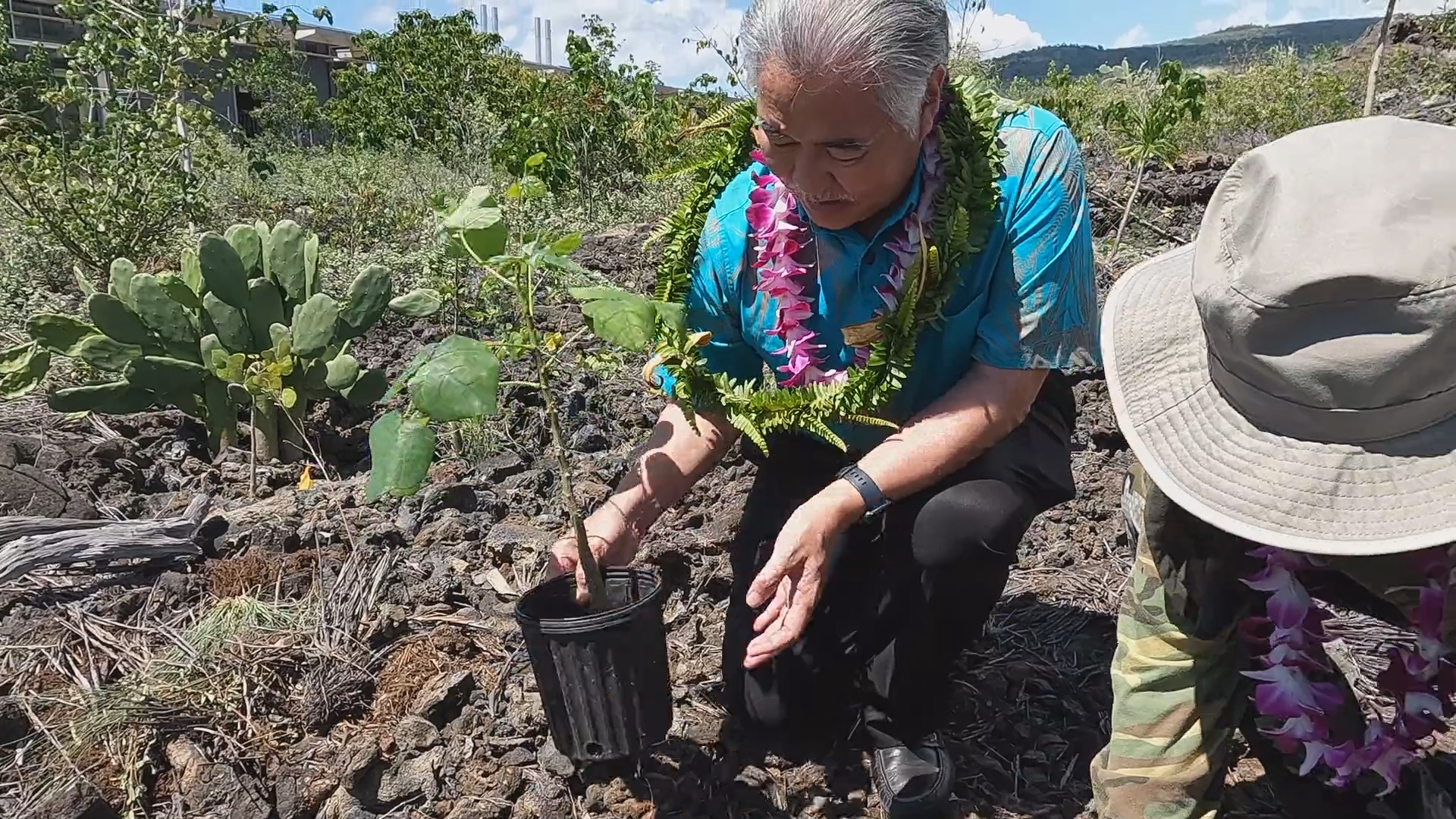 (BIVN) – The Pālamanui Forest Preserve in Kona recently got a helping hand from Governor David Ige during a visit to the 706-acre tropical, dryland forest.

Less than a mile upslope from the Ellison Onizuka Kona International Airport, lies the 706-acre Pālamanui Forest Preserve. It is a tropical, dryland forest containing some of the best remaining remnant dry forest in Hawai‘i.

On Friday, Governor David Ige got a close-up look at what foresters and educators now envision as a living laboratory for students at the Pālamanui Community College (PCC) and members of the surrounding community.

During his visit the Governor also planted another tree to count toward the state’s Hundred Million Tree Pledge, with a goal of replanting, restoring, and conserving that number of trees around the islands by 2030.

He learned more about the recently signed agreement between the DLNR Division of Forestry and Wildlife (DOFAW) and the University of Hawai‘i Commmunity Colleges system, which outlines the shared stewardship of the Pālamanui forest. 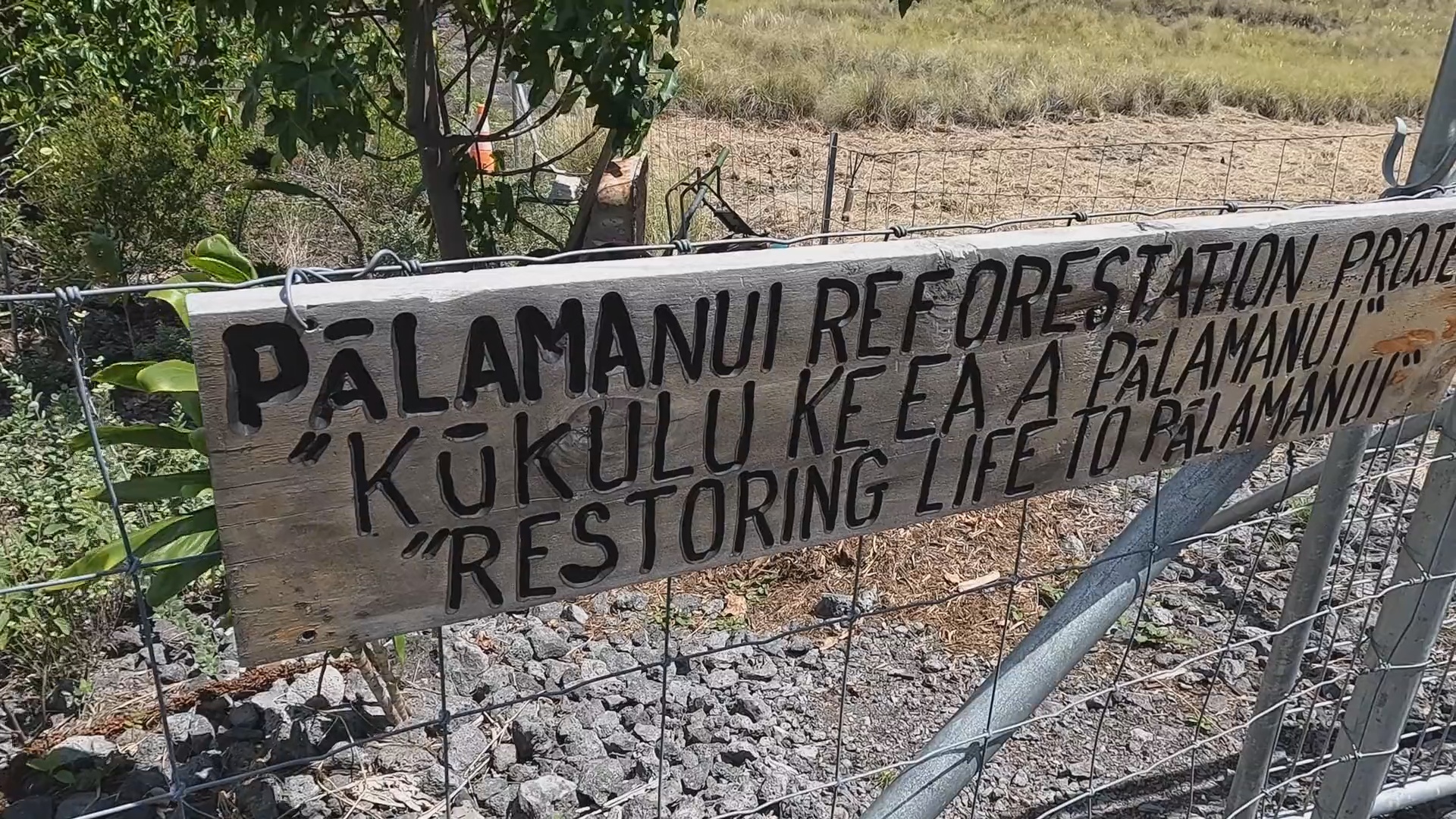 “We are thrilled to collaborate with the DLNR and DOFAW to protect and restore this threatened ecosystem,” said Hawai’i Community College Chancellor Rachel Solemsaas. “This conservation effort will contribute to carbon sequestration to combat climate change, create unique learning opportunities for the local community, and more. Hawai‘i Community College is committed to the principle of mālama ʻāina, and this project is one way we’re putting that value into action.”

After an opening protocol, Dr. Richard Stevens, a PCC professor and one of the major originators of the cooperative agreement between DOFAW and UH, told Governor Ige, “Palamanui Reserve here, is where a lot of those hundred million trees are going to be preserved, conserved, and restored, over these next few years. We have this terrific partnership with your great people from DOFAW and DLNR, to make this happen, and it is something that is so exciting for our community.”

Until recently, Elliott Parsons worked for DOFAW and is now working with the UH Regional Species and Climate Change Management Network. He explains the Pālamanui dryland forest is both naturally and culturally significant, and with the loss more than 95% of tropical dry forests around the state, is critical to preserve.

While with DOFAW, Parsons was instrumental in crafting the agreement, largely based on previous management agreements for other State Forest parcels. “Remnant patches, such as these, where we have pockets of the existing forest that’s still there, are so important to protect, because they are the last visages of this ecosystem that used to be much more widespread,” Parsons said. 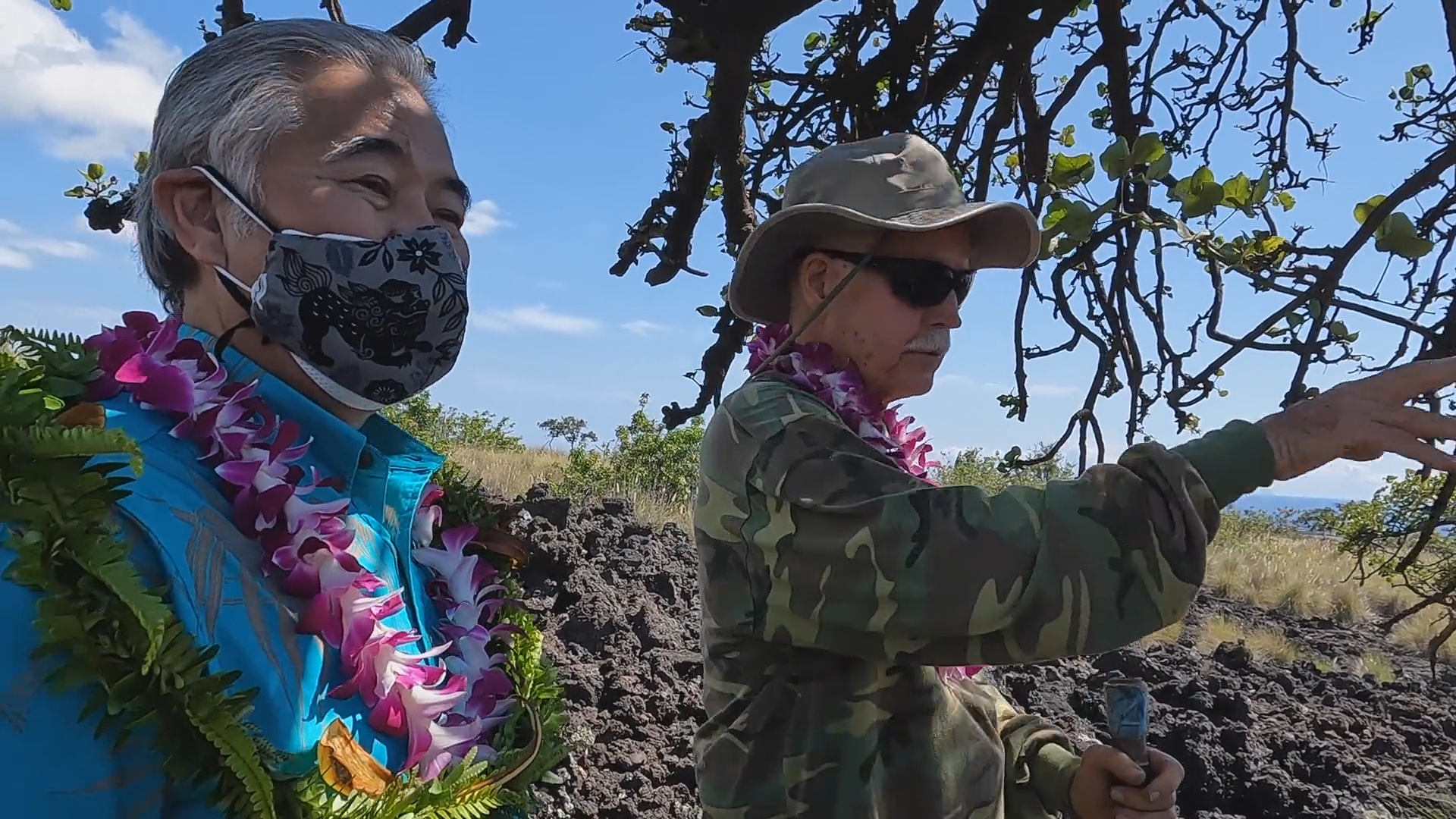 The forest above the campus is dominated by native lama, alahe’e, and wiliwili trees, some of which are in a cluster known as the “golden oldies.” On a tour of the forest, Stevens showed Governor Ige the golden oldies, so named for the hue of their trunks and their ages, estimated to be at least several hundred years old. 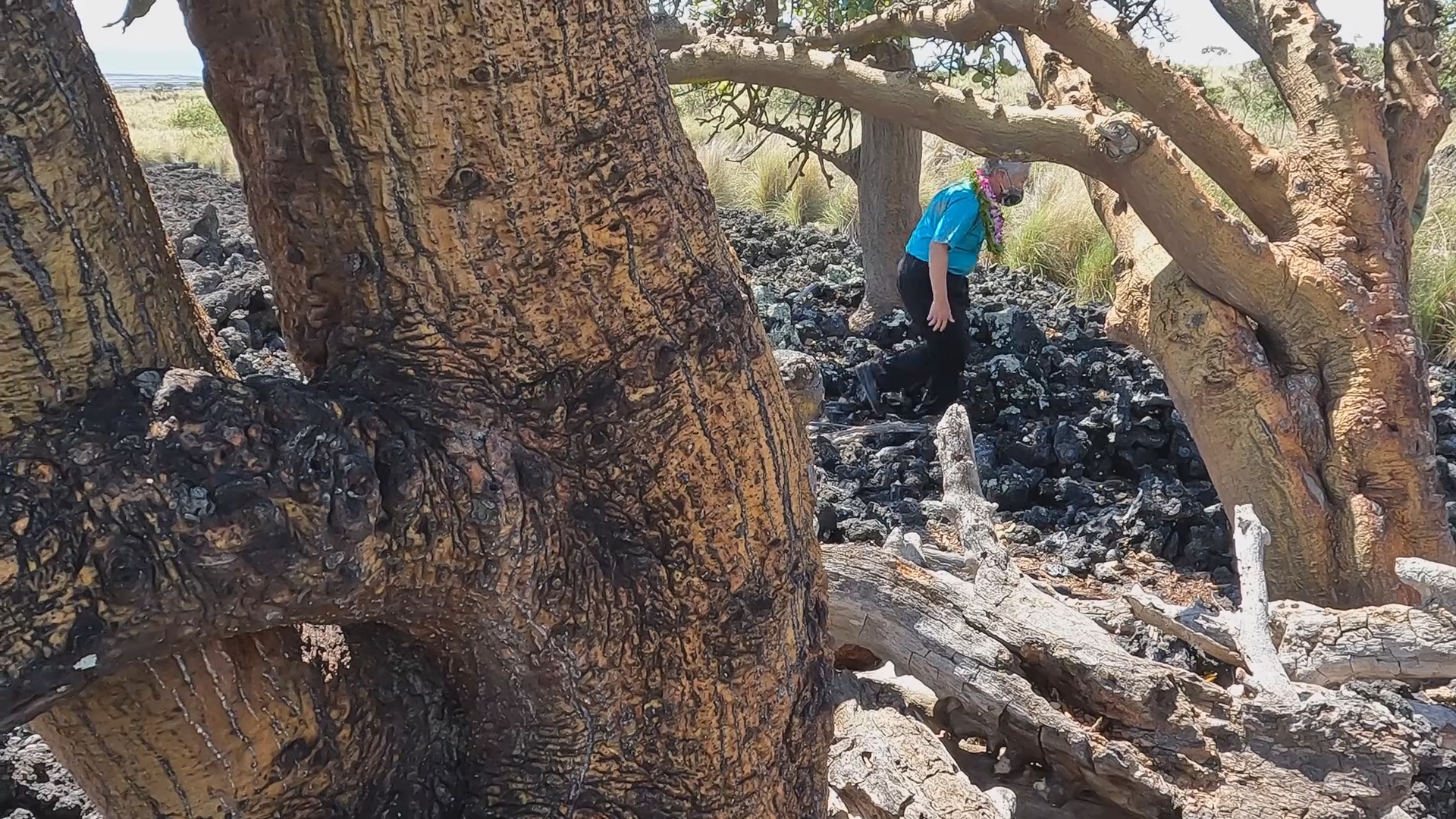 Like other dryland forests in Hawai‘i, in this time of climate change, the survival of the Pālamanui dry forest is threatened by wildfires and ungulates, who as Parsons explains graze, browse, and strip the bark from trees. “In this area it’s mostly feral goats and they have eliminated a large section of this forest already. You can tell by a narrow band of alahe‘e trees that are dead or dying from being bark stripped,” he added.

Back down on campus, Stevens showed Gov. Ige the garden, where native trees are being planted to increase their numbers. Called, “the forest of loved souls,” Stevens asks guests who plant trees in the garden to remember a loved one. “We need trees, the Earth needs trees, this island needs trees. When you have a personal connection with the trees you are planting, it takes it to an even deeper level,” he remarked.

Gov. Ige planted and watered a wiliwili, which is the third native tree he’s planted in recent months, adding to the hundred million trees goal.