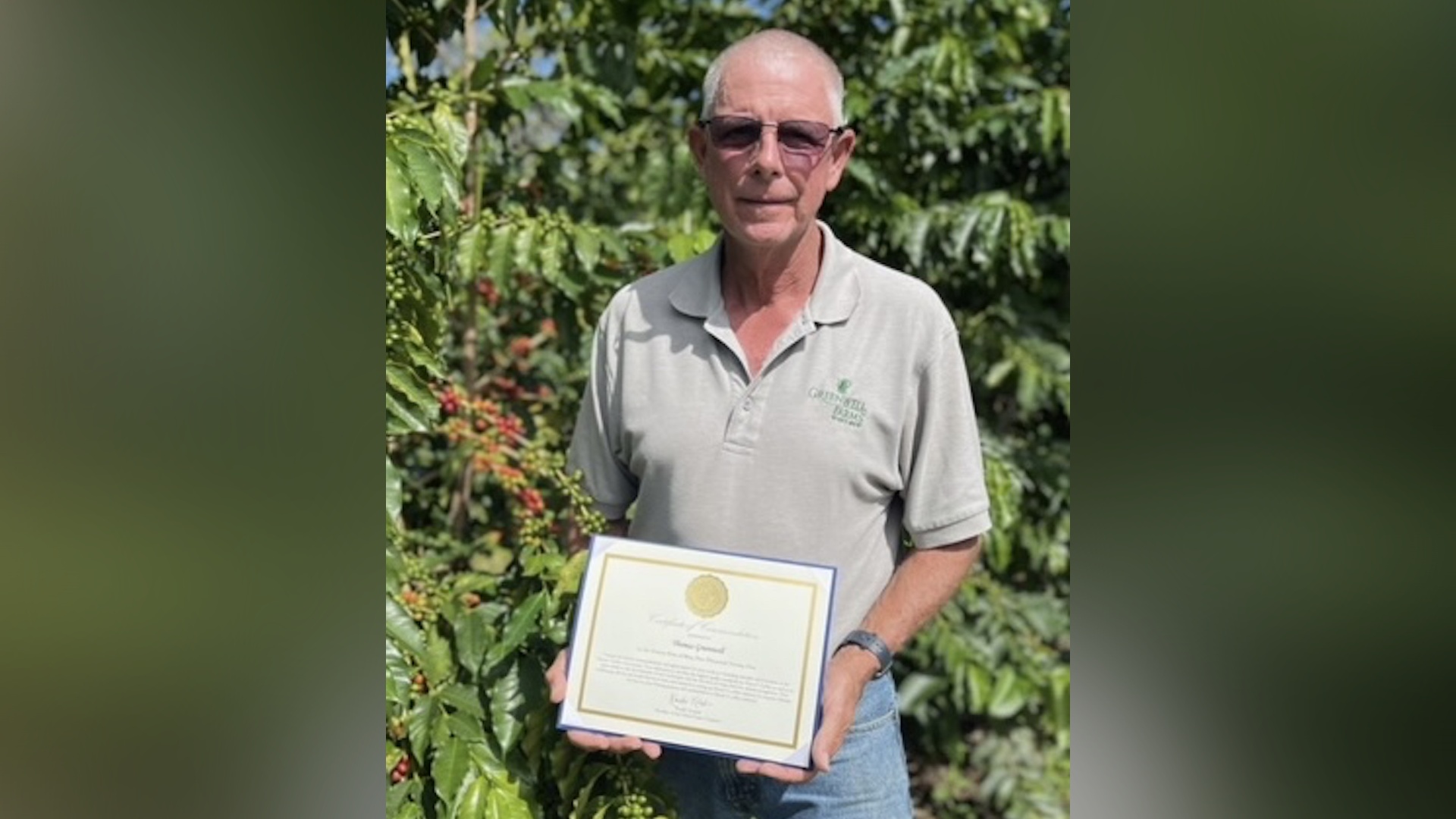 KONA, Hawaiʻi - The U.S. House of Representatives recognized the Greenwell Farms President for his trailblazing efforts in the Hawaiʻi coffee industry.

Congressman Kai Kahele presented Greenwell with the special Recognition “for his trailblazing efforts in the Hawaii coffee industry” during the recent Hawaii Coffee Association’s annual conference. Rep. Kahele “extended his mahalo for Greenwell’s lifelong pursuit and commitment to Hawaii’s coffee industry,” and “noted that Greenwell’s leadership has been instrumental in setting up Hawaii coffee for success.”

“I am humbled by this recognition,” said Greenwell Farms President Tom Greenwell. “Our family farm’s legacy has grown into five generations reflecting back onto our tradition of hard work and quality in all we do.”

According to Greenwell Farms:

Tom Greenwell, great-grandson of Henry Nicholas Greenwell, was born in Kona and raised in Waimea at Kukaiau Ranch. Tom returned home to Kona more than 40 years ago where he took the job of mechanic for W.H. Greenwell Ranch in 1980. After his father’s passing in 1992, Tom took the reins of Greenwell Farms and today, this fifth generation farm is a leader in Kona’s coffee industry. Greenwell is a founding member and former President of the Hawaii Coffee Association as well as garnering several farm awards and growing the success of Greenwell Farms.

Greenwell Farms began in 1850 when Henry Nicholas Greenwell left England and first set foot on the fertile soil of rural Kona. Henry spent the next 40 years farming, ranching and perfecting his Kona coffee, soon exporting it to Europe and the Americas. In 1873, the President of the Kaiser’s Exposition in Vienna, Austria awarded the Greenwell’s a “Recognition Diploma” for their Kona coffee at the World’s Fair.

The family tradition continues today, nearly 175 years later, with fourth-generation farmers Tom and Jennifer Greenwell. Their team now includes son Ben, the farm’s fifth generation, who work to maintain the tradition of high quality Kona coffee at Greenwell Farms. Free tours of its coffee farm and processing facilities highlighting the century old Arabica coffee trees and the various tasks involved in hand-picking and processing of the coffee cherry are available every day from 8:30am to 4:30 pm. Tours culminate at the Greenwell Farms Store where visitors can sample various roasts and Kona coffee products are available.