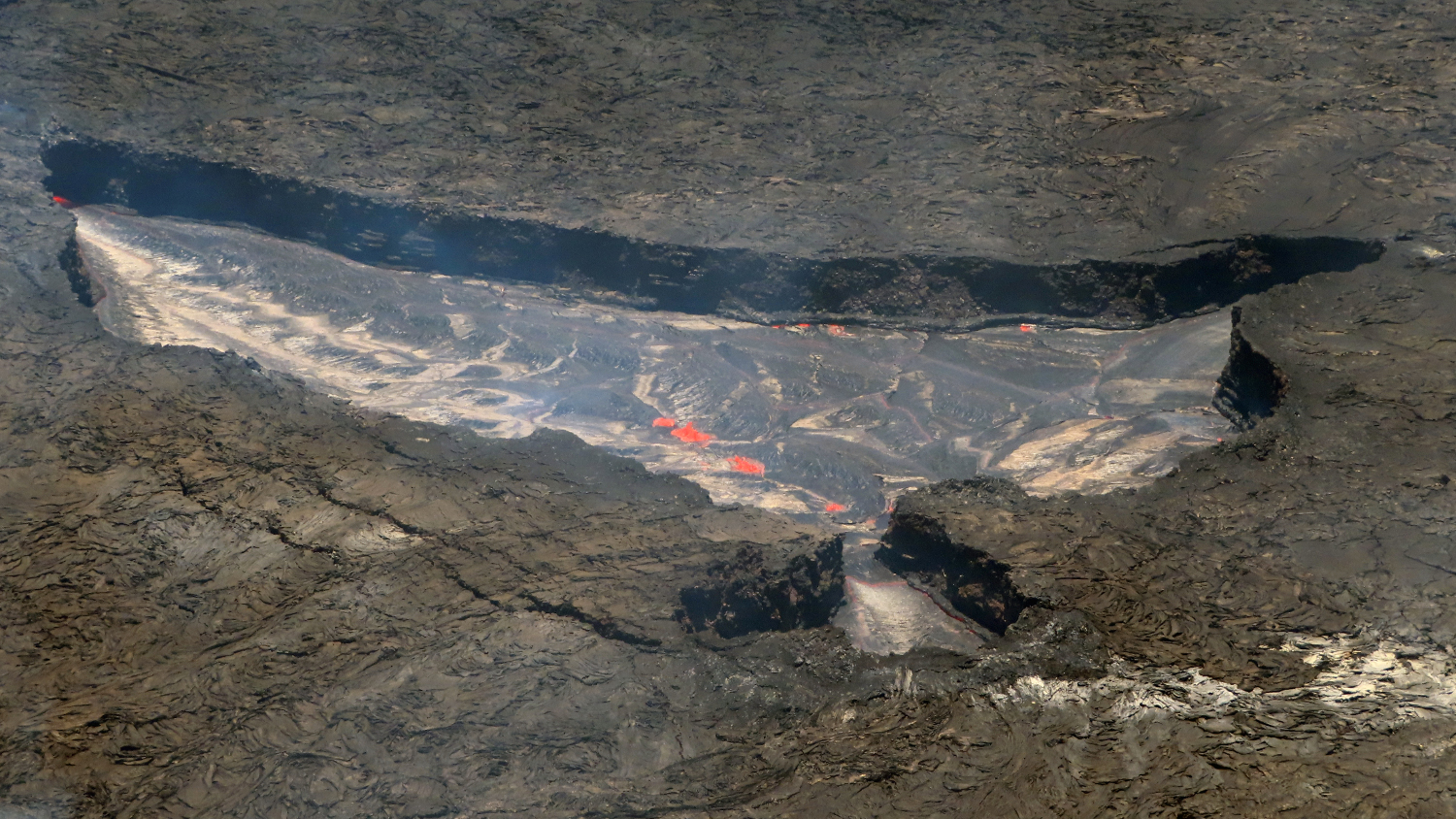 HAWAIʻI VOLCANOES NATIONAL PARK - All recent lava activity has been confined to the crater at the summit of Kīlauea, and the alert level remains at WATCH. 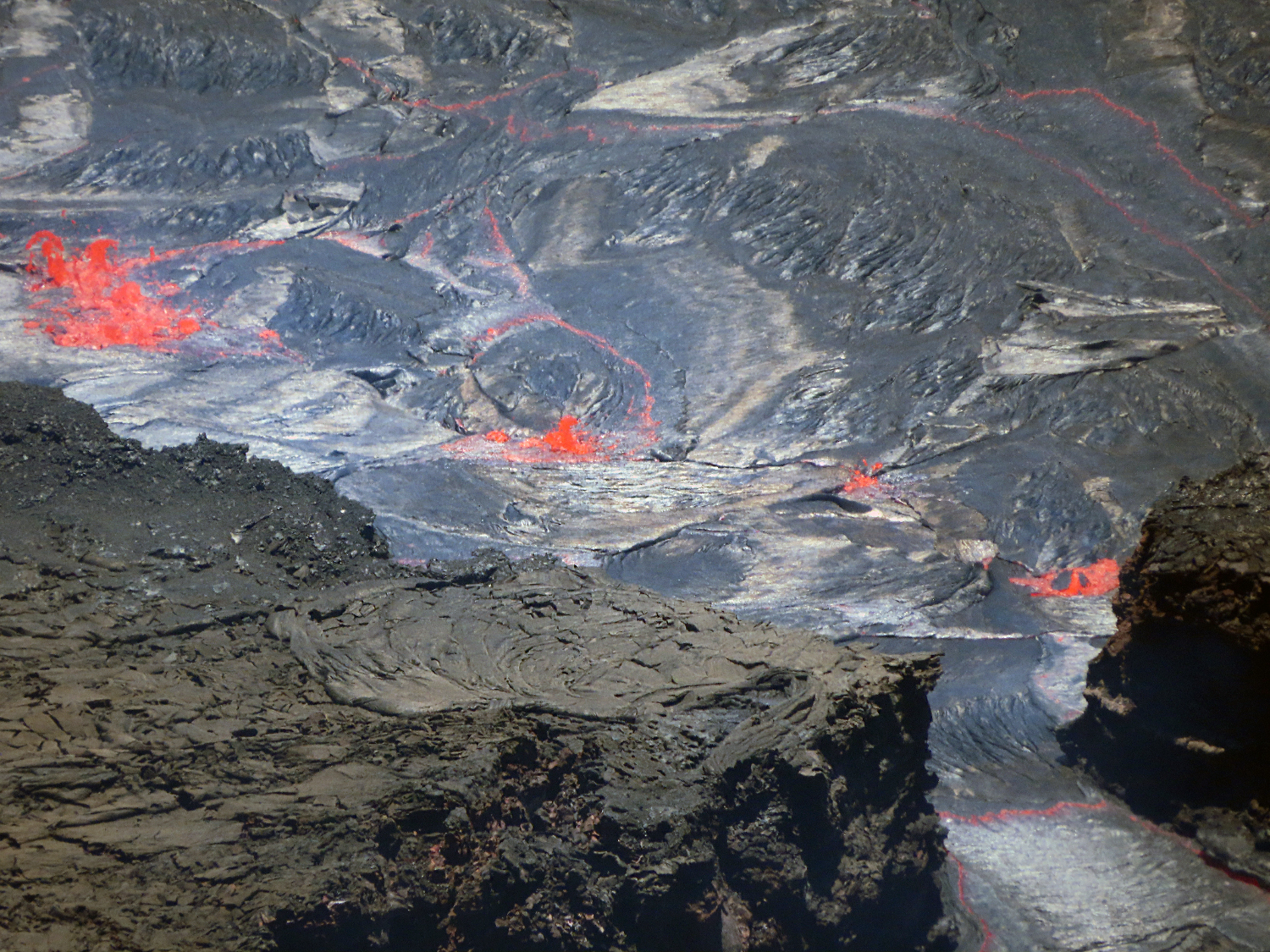 USGS: “This image shows spattering on the active lake surface of Halema‘uma‘u, as seen during a Kīlauea summit observational field shift on June 29, 2022. The areas between the smooth, silvery plates on the surface spatter vigorously as these plates get dragged down into the molten lake and new plates of rapidly cooled lava form in their place.” (USGS photo by L. Gallant)

(BIVN) – The current eruption of Kīlauea volcano – which began back on September 29, 2021 – has entered its ninth month. Scientists say all lava activity remains confined to the Halemaʻumaʻu crater at the summit within Hawaiʻi Volcanoes National Park, and “current data indicate that this scenario is likely to continue.”

The lava was observed flowing from left to right in the above photo, “and multiple areas of spatter can be seen (the red patches in the center of the photo and along the margin of the lake),” the scientists noted. “The active lake is 23 feet (7 meters) below the rest of the lake surface. The main portion of the lake is 3 feet (1 meter) above the small pinched out section.” 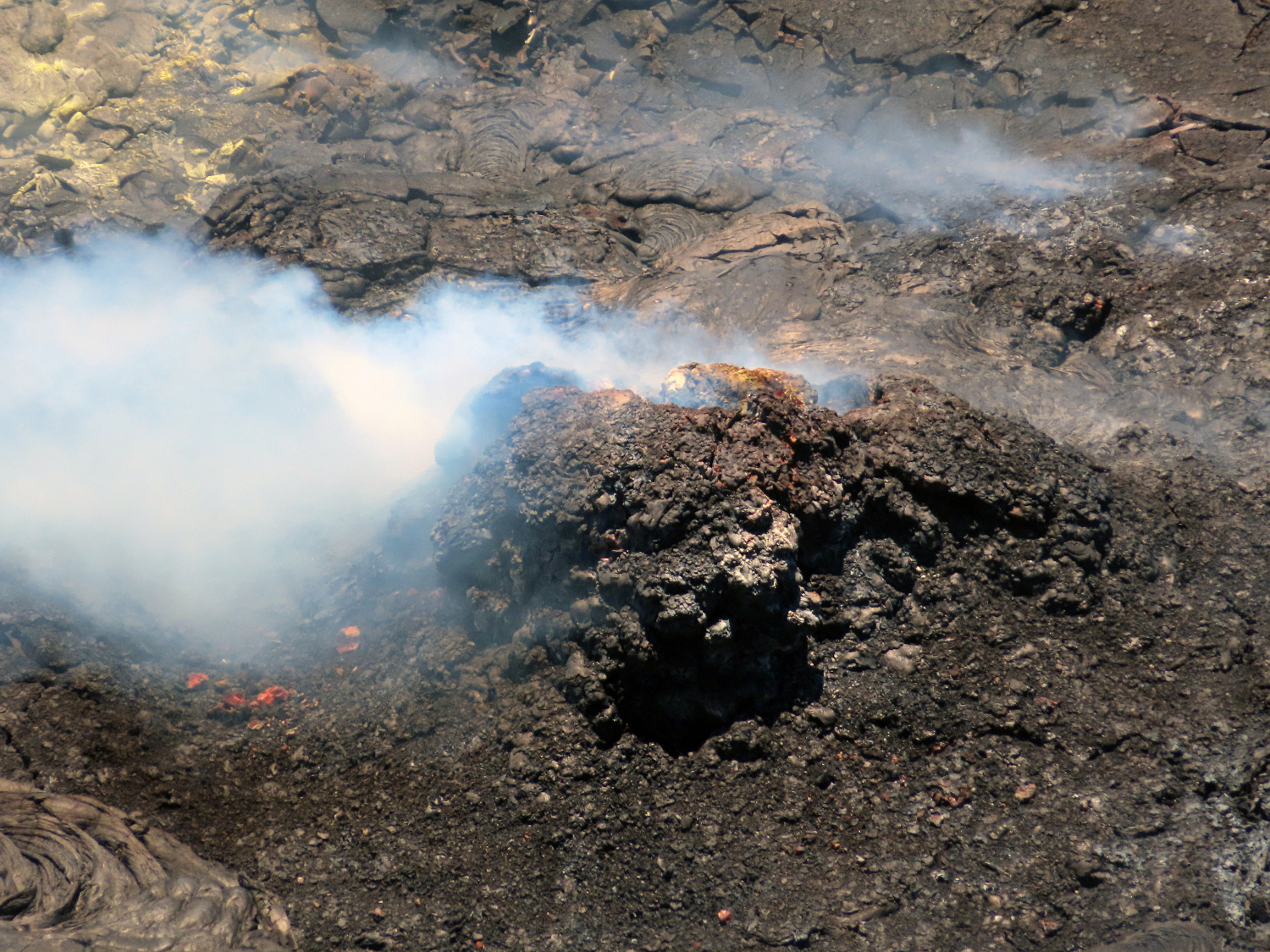 USGS: “This image shows a small hornito degassing on the surface of Halema‘uma‘u crater floor, at the summit of Kīlauea. Hornitos are small, rootless cones that are fed by the tube network within the lava lake. Alteration from the persistent degassing is what causes some of the variation and color you can see in the area around the hornito (note the yellows and reds).” (USGS photo by L. Gallant)

Summit Observations: Eruption of lava from the Halemaʻumaʻu western vent into the active lava lake has continued over the past 24 hours. No significant ooze-outs noted over the past day. Overflight measurements on June 17, 2022, indicated that the crater floor had seen a total rise of about 120 meters (394 feet) and that 93 million cubic meters (24 billion gallons) of lava had been effused since the beginning of this eruption on September 29, 2021. Tilt was steady over the past day; at 7:15 AM this morning a summit tiltmeter began to record inflationary tilt consistent with the inflationary phase of a summit deflation-inflation (DI) event. A sulfur dioxide (SO2) emission rate of approximately 1,200 tonnes per day (t/d) was measured on June 29, 2022.

Rift Zone Observations: No unusual activity has been noted along the East Rift Zone or Southwest Rift Zone; steady rates of ground deformation and seismicity continue along both. Measurements from continuous gas monitoring stations downwind of Puʻuʻōʻō in the middle East Rift Zone remain below detection limits for SO2, indicating that SO2 emissions from Puʻuʻōʻō are negligible.