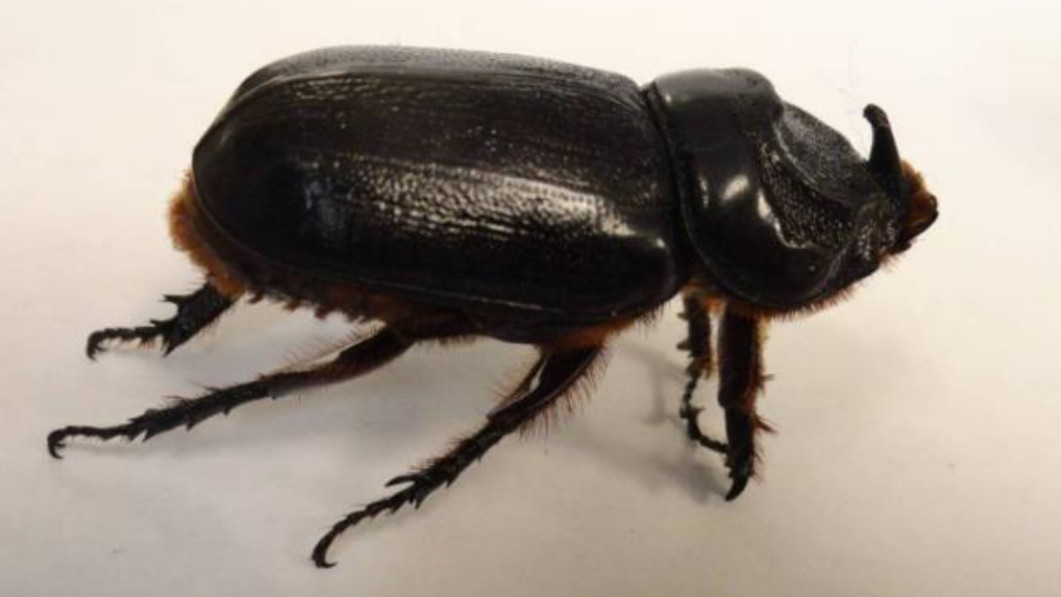 HONOLULU, Hawaiʻi - The Hawaiʻi Department of Agriculture has issued an interim rule to restrict the movement of palm tree material in order to slow the spread of the Coconut Rhinoceros Beetle on Oʻahu.

(BIVN) – The State of Hawaiʻi is taking steps to prevent the invasive coconut rhinoceros beetle from spreading from Oʻahu to the neighbor islands.

The Hawaiʻi Department of Agriculture on Friday issued an interim rule restricting the movement of beetle host material on the island of Oʻahu and from Oʻahu to neighbor islands.

The department’s Plant Pest Control Branch New Pest Advisory for the coconut rhinoceros beetle, or CRB, can be found here on the HDOA website.

The rule, which is now in effect, includes but is not limited to materials like “entire trees, green waste, compost, mulch, trimmings, fruit and vegetative scraps and decaying stumps of palm and palm-related plants,” the State says.

From the ag department:

In November 2020, the Chairperson of the Hawaiʻi Board of Agriculture issued another interim rule designating the Island of Oʻahu as an area infested by CRB (Oryctes rhinoceros).

CRB is a serious pest of palm trees, primarily coconut palms, as the adult beetles bore into the crowns of the palms to feed on the tree’s sap. New unopened fronds are damaged in this way and when fully opened, may break and fall unexpectedly. If CRB kill or damage the growing point of the palm, the tree may die. Secondary fungal or bacterial pathogens may also attack the wounds caused by CRB, thereby killing the tree as well. Tree mortality after CRB attack has been reported to be anywhere from 10 percent to 50 percent. Dead trees then become a safety hazard as they may fall unexpectedly after the trunk rots, potentially resulting in bodily injury or property damage.

CRB was first detected in Hawaiʻi in Dec. 2013 at Joint Base Pearl Harbor-Hickam and has since been detected in West Oʻahu, from Māʻili to Pearl City and north to Kunia. Infestations have also been detected on the North Shore from Mokuleʻia to Kahuku. More than 3,000 CRB traps have been deployed around O`ahu to detect infestations. There have been no detections of CRB on islands other than Oʻahu.

To help slow the spread of the invasive beetle on Oʻahu and to neighbor islands, the interim rule will restrict the movement or transportation of CRB host material within the island of O`ahu and from a CRB-infested area to an area that is uninfested, except as approved by the HDOA.

According to ag officials, transportation of CRB host materials may be authorized for each of the following circumstances:

The State says this rule “will not affect export (out-of-state) shipments of CRB host materials, provided that they are exported directly from a CRB-infested area and are not transshipped through a CRB uninfested area in the state.”