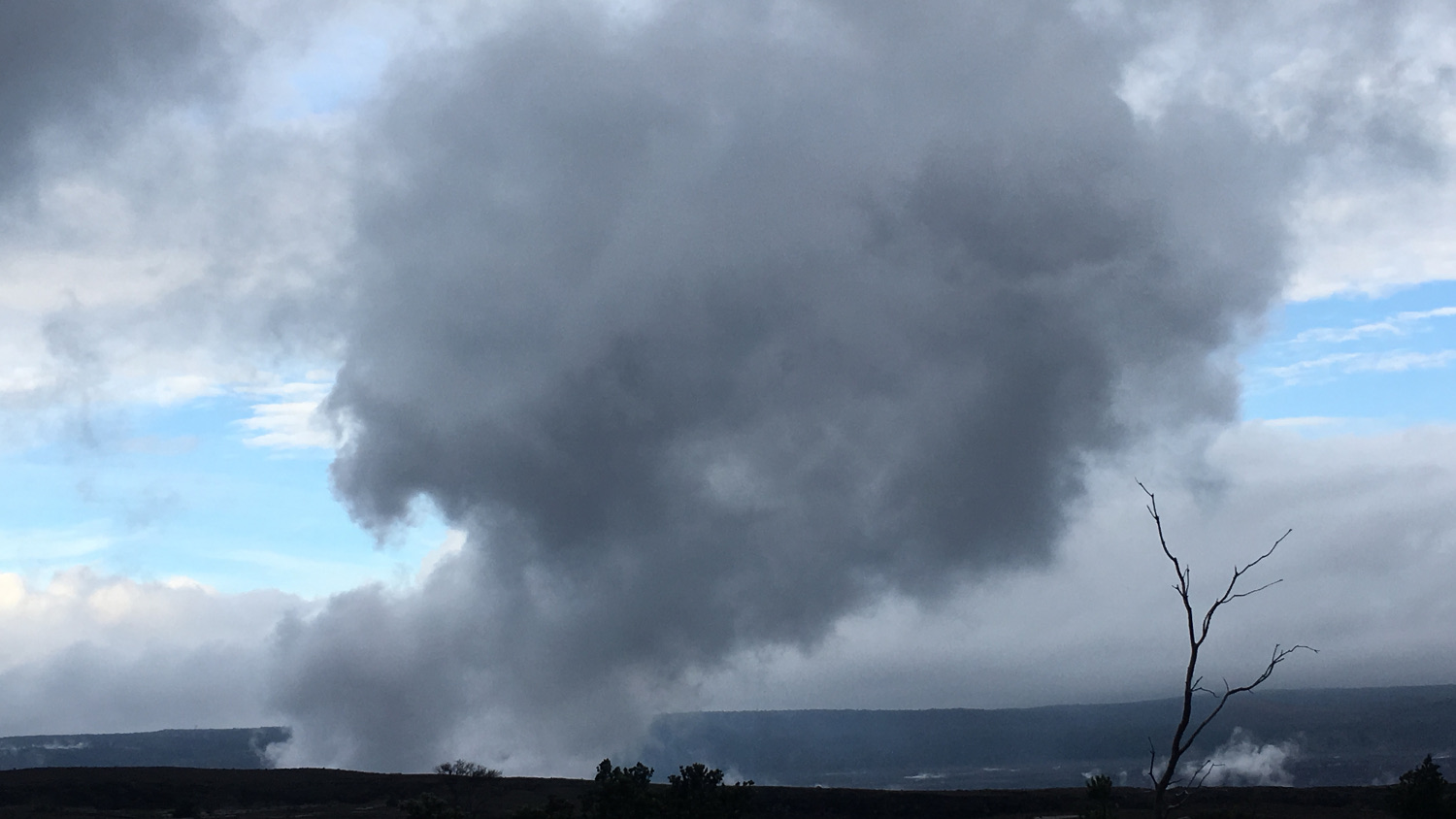 USGS photo from November 6, 2018: "Sulfur dioxide and hydrogen sulfide gases themselves are not visible, but dramatic plumes are sometimes visible at Kīlauea Volcano's summit (shown here)"

HAWAIʻI ISLAND - Scientists explain how observations of sulfur dioxide are critical to both tracking and understanding eruptive behavior at Kīlauea.

USGS: “At left, the degassing plume at Kīlauea in 2013 as seen by a standard, visible-light camera. Note that plume is mostly transparent, with some blue/brown tones from aerosol scattering, and hard to distinguish from background cloud. At right, the plume from the same vantage point as seen by a UV camera. The sulfur dioxide in the plume absorbs UV and makes the plume appear dark.” (USGS photos by C. Kern)

The volcanic gas plume at the summit of Kīlauea Volcano in Hawai‘i Volcanoes National Park is often the most visible indication of the ongoing eruptive activity during the daylight hours. On some days, it can also be quite easy to smell the gas plume, if the winds blow it toward accessible areas.

Surprisingly, no! When you see a volcanic plume on the Island of Hawai‘i, you may see a few different colors—white, or bluish, or brownish. Those different colors result from atmospheric scattering by liquid water droplets (white) and sulfate aerosols (blue, brown) in the plume. What you smell is sulfur dioxide (SO2), which is invisible to our eyes.

Observations of SO2 are critical to both tracking and understanding eruptive behavior. The USGS Hawaiian Volcano Observatory (HVO) relies heavily on measurements of SO2 emission rate, which is often used as a proxy for volcanic activity. Such measurements are also critical for vog (volcanic air pollution) forecasts and can be used for calculating lava eruption rates.

HVO also relies heavily on cameras to document activity, including both visual and thermal cameras. A third type of camera—an ultraviolet (UV) camera—allows volcanologists to visualize those important, and otherwise invisible, SO2 plumes. SO2 absorbs ultraviolet light, which makes it visible in UV imagery even when it cannot be seen by standard cameras.

UV cameras have been used at Kīlauea before. Patricia Nadeau, current member of the HVO gas geochemistry group, studied the summit plume using a UV camera in 2010 while a graduate student at Michigan Technological University. Later, in 2013, a combined effort between the Cascades Volcano Observatory (CVO) and HVO resulted in the installation of an automated UV camera system at the summit of Kīlauea. That camera station was removed in 2018 when it was threatened by ground cracking associated with summit caldera collapse events. A campaign-survey-style UV camera was also used for part of the 2018 lower East Rift Zone eruption response, but HVO has not utilized such cameras much since then.

Now, with lava and strong SO2 degassing having returned to Kīlauea summit in late 2020, HVO and CVO are teaming up with colleagues at the University of Sheffield in the United Kingdom. The UK scientists have developed a new generation of small UV cameras that use Raspberry Pi technology. A Raspberry Pi is a small, low-cost computer, about the size of a credit card, and HVO has used them in other applications before.

The new cameras – PiCams – will be tested later this month and can be used as portable field tools or installed as permanent stations in HVO’s monitoring network. Pending the outcome of the initial tests, HVO plans to install at least one PiCam permanently at Kīlauea’s summit. A second PiCam will either be kept portable for flexibility or will eventually be installed near Mauna Loa’s summit.

Once the PiCams are ready for use, they will provide both a 2-dimensional view of Kīlauea’s SO2 degassing as well as a high-temporal resolution, continuous timeseries of SO2 emission rate measurements.

The continuous SO2 emission rate data will make it easier to study degassing in conjunction with other continuous datasets, like earthquake activity and ground deformation. This will give greater insight into the role of degassing in specific eruptive events, something that has not always been easy to do in the past. Similar work has been done over the past decade at many volcanoes around the world – including here at Kīlauea, where earthquake activity and SO2 emissions were shown to be linked during lava lake rise-fall events in 2010. The current lava lake in Halema‘uma‘u has a different configuration and set of behaviors from the 2008 – 2018 lava lake, and HVO is eager to see what the new PiCams will show us about the degassing of the new lake.