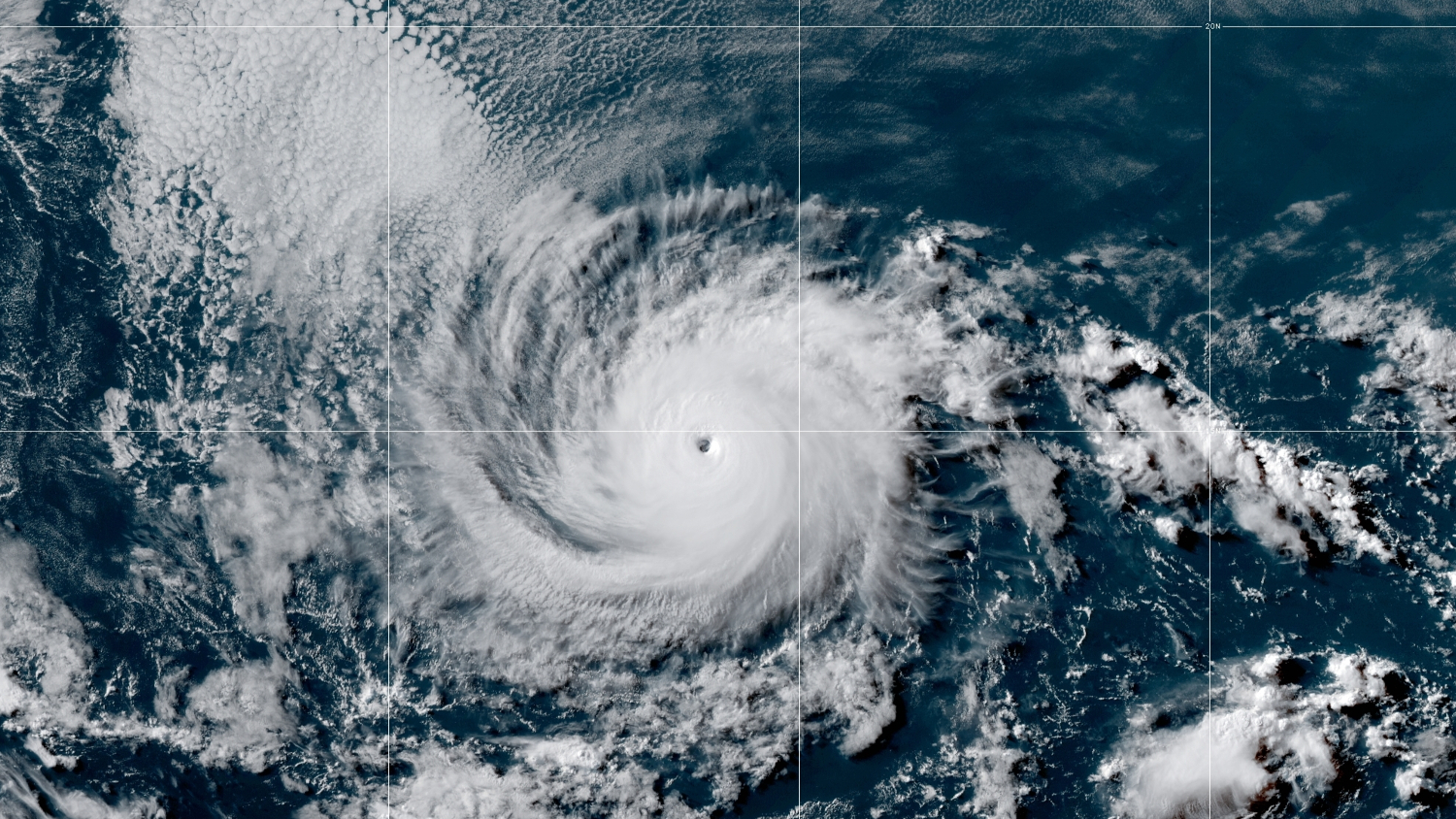 EASTERN PACIFIC - Darby is a small but "mighty" Category Four hurricane, moving west in the Eastern Pacific at 15 miles per hour. 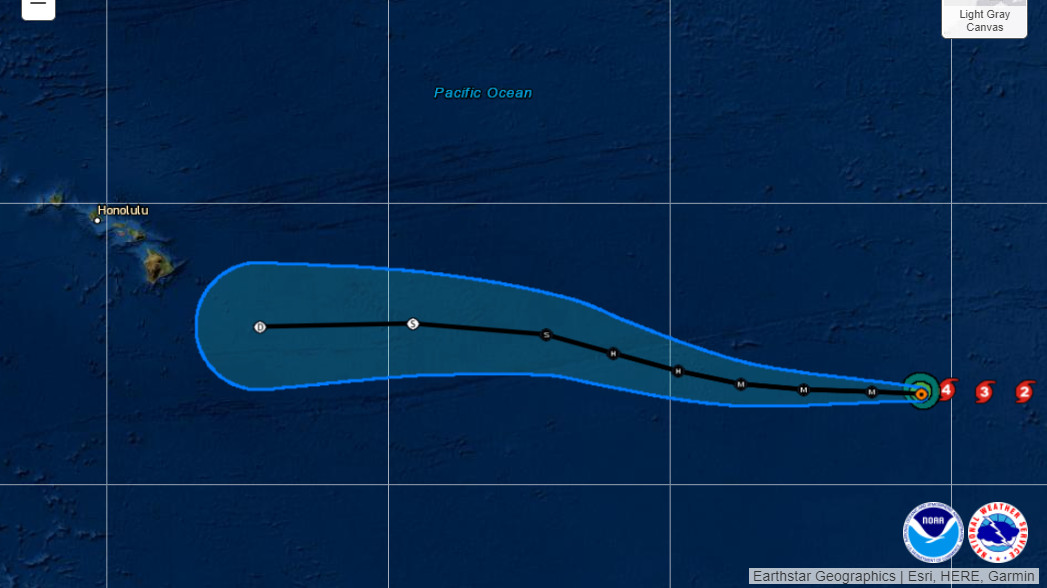 (BIVN) – Major Hurricane Darby, about 2,000 miles east southeast of Hilo, is slowly making its way west across the Eastern Pacific.

Over the last several hours, Darby’s maximum sustained winds have increased to near 140 mph with higher gusts, making the storm a powerful category 4 hurricane on the Saffir-Simpson Hurricane Wind Scale.

Forecasters in Hawaiʻi say they are currently focused on what becomes of Hurricane Darby as it approaches the Central Pacific. “The current National Hurricane Center forecast has Darby passing over 140 degrees longitude and moving into the Central Pacific Thursday as a weak tropical storm with continued weakening into a tropical depression by Saturday,” the National Weather Service in Honolulu said on Monday at 10 a.m. “In this forecast scenario, the enhanced tropical moisture field could bring some heavy showers over the weekend, likely in the Saturday night through Sunday time frame. Stay tuned as this long term forecast becomes more refined through the week.” 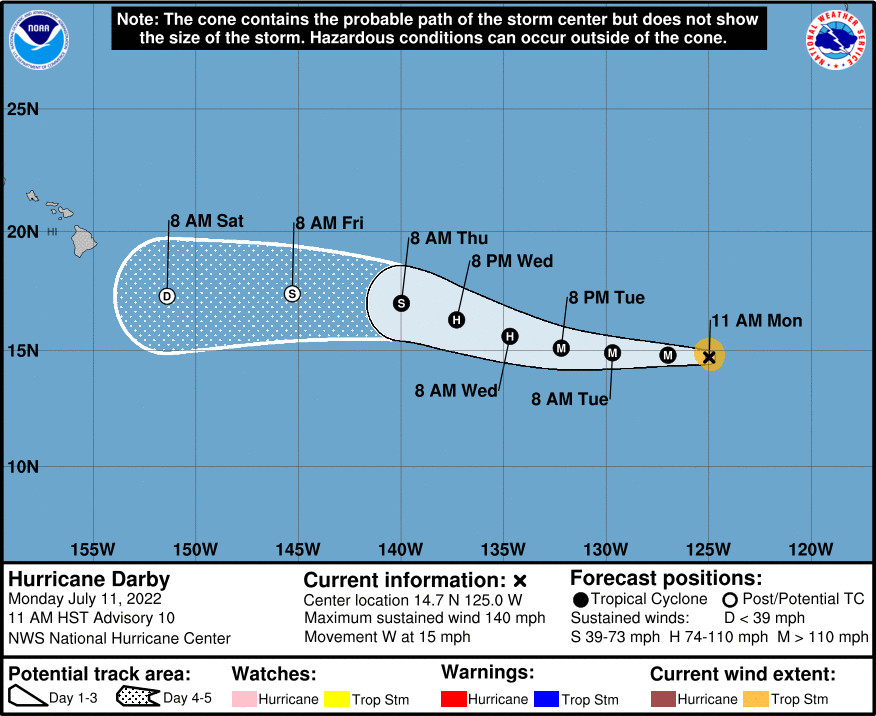 From the National Hurricane Center at 11 a.m. HST:

Darby’s satellite presentation continues to be very impressive, and has improved further since this morning. While convective cloud tops associated with the eyewall convection have not cooled much more, hovering between -65 to -75 C, the eye temperature has warmed further, with the warmest pixel fluctuating between +18-20C. The presentation on visible images is similarly spectacular, with a few mesovorticies seen rotating around in the eye exhibiting a classic stadium effect, and the GOES-GLM occasionally showing some inner core flashes. The latest UW-CIMSS objective Dvorak estimate has stabilized somewhat at T6.1/117 kt despite the warming eye temperature. However, very small tropical cyclones like Darby are often underestimated using objective Dvorak guidance, as was seen during similarly small systems, like Dorian in 2019 when it near the Bahamas. I also suspect the eyewall cloud tops have warmed a tad due to diurnal fluctuations and could cool once again during the typical nighttime max. The current intensity this advisory will be set at 120 kt, indicating a remarkable intensification rate of 65 kt in the past 24 hours.

A little bit of additional intensification is possible in the short term and the latest intensity forecast now peaks Darby as a 125-kt hurricane in 12 hours, very close to the GFS-SHIPS guidance. It is notable that this was also the peak intensity that a similarly-small Hurricane Felicia also reached in this same general vicinity last July. While shear is expected to remain very low through 48 hours, sea-surface temperatures do start to decrease and drop below 26C in 36 hours, which should begin a weakening trend by Wednesday. Vertical wind shear then begins to increase more after 48 hours, which will likely induce more rapid weakening of the small cyclone. Both the GFS- and ECMWF model simulated IR-brightness temperature shows deep convection collapsing on Friday, and the latest forecast now makes Darby post-tropical by 96 hours.

Darby is still moving westward at 275/13 kt. The track philosophy has not changed this cycle, as a mid-level ridge is steering the hurricane generally westward. A slight weakness in the ridge after 24 hours should allow Darby to take a more west-northwestward track in the 36-72 hour forecast period. As Darby becomes more shallow at the end of the forecast period, its track is forecast to bend back westward as the low-level trade wind flow becomes dominant. The latest track forecast is similar to the previous advisory, still favoring a blend of the GFS and ECMWF forecasts, but ends up near the TVCE consensus aid towards the end of the forecast period.