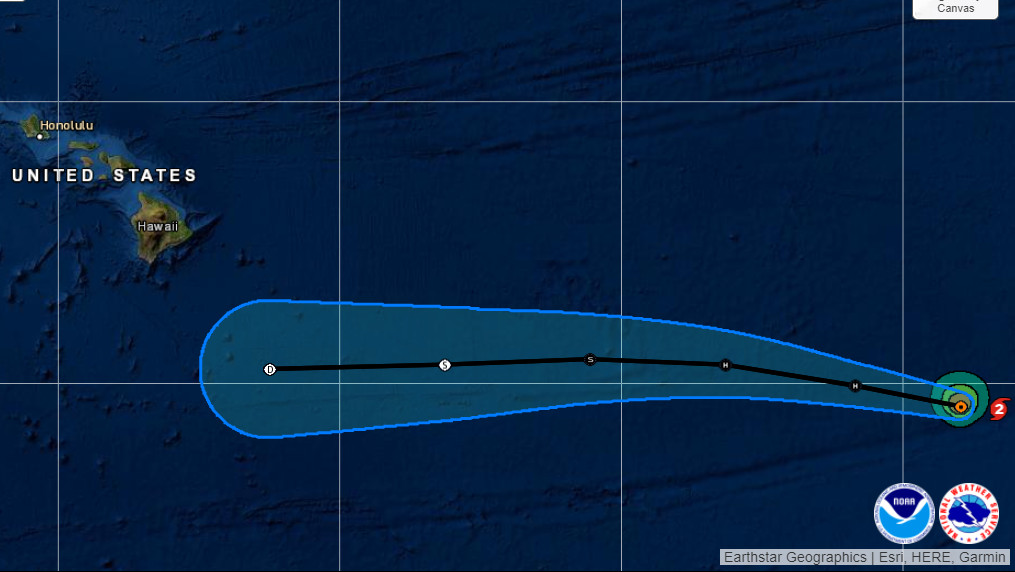 HAWAIʻI - Significant weakening is forecast during the next 48 hours, and Darby is expected to dissipate by Sunday, the Central Pacific Hurricane Center says. 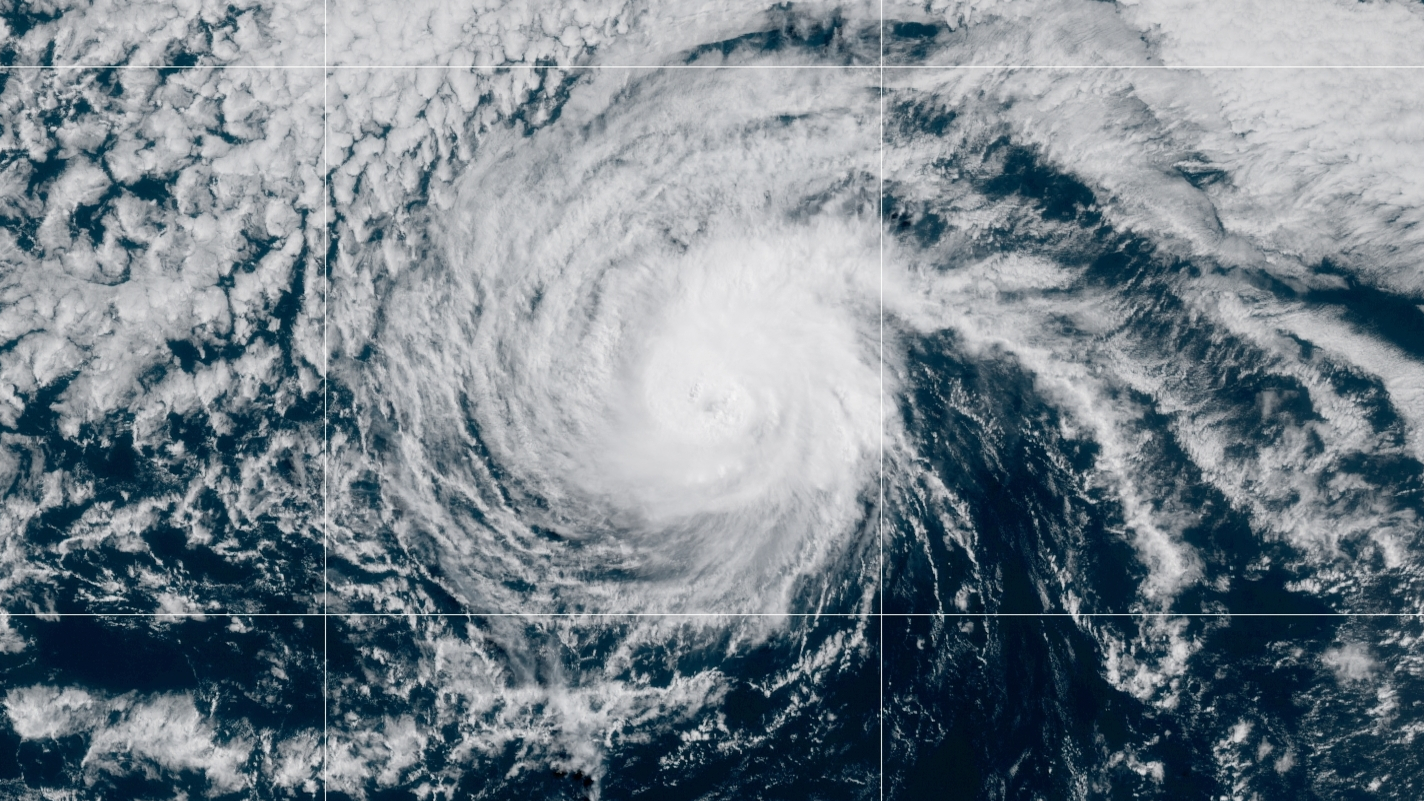 “Darby crossed longitude 140W and officially entered the central Pacific basin just after midnight HST this morning,” the Hurricane Center said. “The cyclone’s satellite appearance has gone through some fluctuations since the previous advisory, but an elongated and somewhat ragged 5-10 nm wide eye has persisted. Pulsing convection continues to encircle the center, but has become much less symmetric.”

As of 5 a.m. HST, Hurricane Darby was 955 miles east-southeast of Hilo. Darby is moving toward the west-northwest near 16 mph, “and this motion is expected to continue over the next 24 hours, followed by a turn to the west thereafter,” forecasters reported. 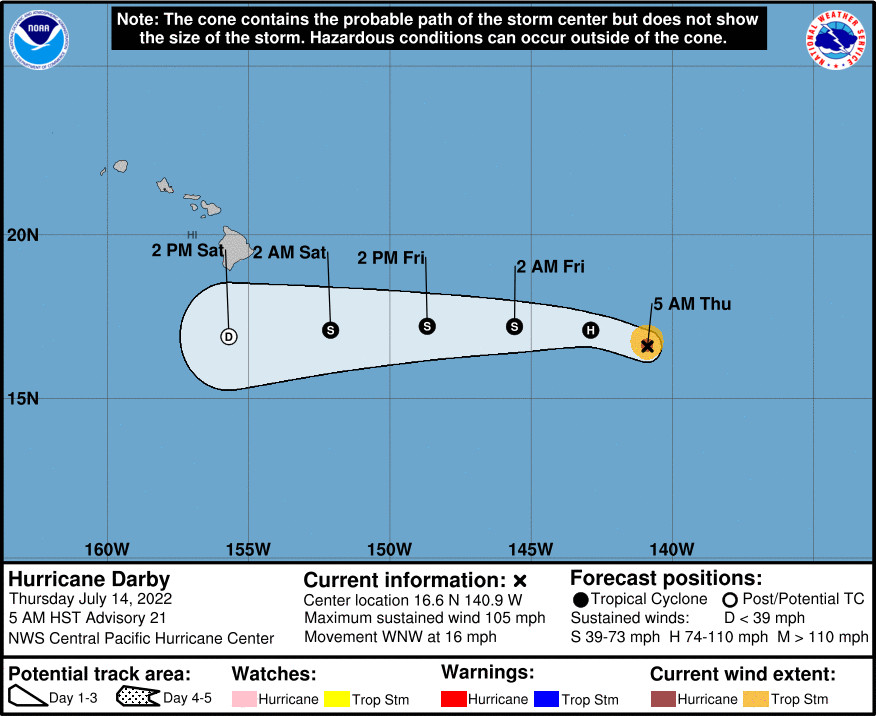 The 5 a.m. discussion posted by the Central Pacific Hurricane Center explains the reasoning behind the forecasted rapid weakening:

Darby lies on the southwestern periphery of a ridge aloft, in an area characterized by moderate southerly vertical wind shear. Darby is moving closer to an upper-level trough to its northwest, into an environment characterized by even stronger vertical wind shear, as evidenced by transverse banding in the northwest semicircle. This shear will allow the cyclone to efficiently ingest the dry mid-level air that prevails, while moving over sub-26C SSTs. Since Darby continues to be a small system, it will quickly respond to the debilitating environment into which it is moving, with rapid weakening expected over the next 48 hours before dissipation occurs by 72 hours. The updated intensity forecast closely follows the consensus IVCN, as well as the SHIPS guidance.

The initial motion estimate for this advisory is 290/14kt. As Darby degrades to a shallow system over the next 48 hours, a persistent strong surface high north of Hawaii will force it to accelerate as it makes a turn toward the west. The updated track forecast is close to the previous forecast, and lies very close to the GFEX.

The possible impacts Darby may have on Hawaiʻi are described in this 4:12 a.m. discussion posted by the National Weather Service in Honolulu:

… the latest forecast trends continue to show Hurricane Darby (which is around 1100 miles E of Hilo) moving toward the islands, with the remnants of Darby still expected to pass south of the Big Island Saturday. There still remains some questions with the exact track of this approaching tropical system, however the northern periphery of the associated moisture field is modeled to influence mainly the eastern islands Saturday through early Sunday, increasing the deep layered moisture potential and heavy rainfall for windward sections of the Big Island and possibly Maui. The airmass in place across the region in advance of the remnants of Darby is expected to initially be relatively stable with drier mid and upper levels likely limiting convection and rainfall rates. However, cross section data shows deeper layer moisture quickly expanding across the Big Island and Maui Saturday night and early Sunday in response to the systems currently forecast closest approach. This could increase the threat for potentially heavy rainfall late Friday night through Saturday. Trades will also become locally strong early this weekend with a wind advisory for the typical windier locales in Maui County and the Big Island potentially in play depending on the exact track.