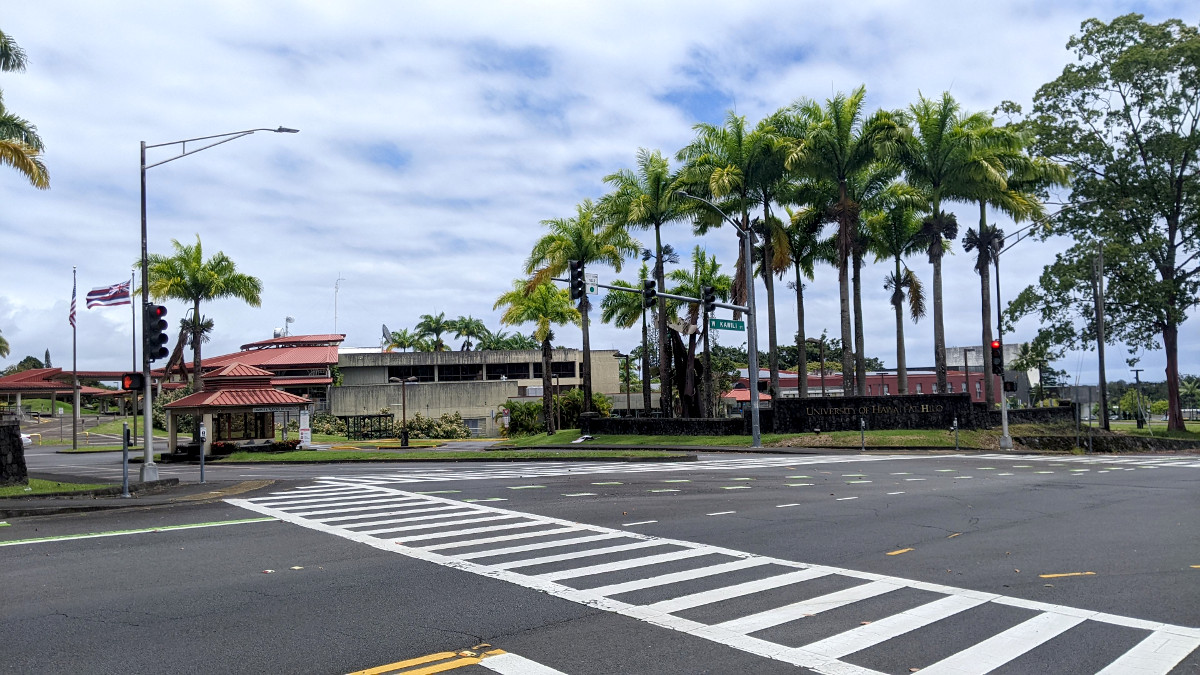 Photo taken outside the UH-Hilo entrance on Friday

UH Campuses In Hilo All Clear After Bomb Threat

HILO, Hawaiʻi - Botht the Hawaiʻi Community College Manono Campus and the University of Hawaiʻi at Hilo campus were closed and searched by police today.

(BIVN) – A “credible bomb” threat to the Hawaiʻi Community College Manono Campus, received by police, prompted the closure of both HCC and the University of Hawaiʻi at Hilo campuses on Friday. An all clear was given after a sweep of the campus buildings was completed.

On Friday, July 15, 2022 at about 9:29 a.m., Hilo Patrol officers responded to a telephone report of a bomb left within a classroom on the Hawai’i Community College (HCC), Manono Campus. A systematic search of the college found no unauthorized persons, devices or explosives on campus. Police also conducted a precautionary search at the University of Hawai’i at Hilo, Kawili Street Campus, where no unauthorized persons, devices or explosives were found.

Police have initiated a terroristic threatening case as a result of the threat and the investigation is being continued by detectives from the Area I Criminal Investigation Section.

The University of Hawaiʻi provided information about the incident via its emergency message service. This “all clear” message summarized the events at 12:56 p.m., after a strong of previous alert messages:

At approximately 12:27 pm we issued the all clear via UH Alert after a sweep of UH Hilo campus buildings was completed.

Campus is now accessible, however, we remain closed for business for the remainder of the day.

At approximately 9:42a, the Hawaiʻi Police Department received a credible bomb threat to the Hawaiʻi CC campus. HPD and Hawaiʻi CC Campus Security conducted a thorough search of Art buildings at Manono campus. As a result, the Hawaiʻi CC buildings were declared clear to return to normal operations around 10:55 a.m.

At approximately 9:50 am this morning, UH Hilo was notified of the threat to the Hawaiʻi CC campus. As a precaution, at approximately 10:30 am the Hawaiʻi Police Department requested to do a check of the UH Hilo campus. Out of an abundance of caution and to allow the HPD to sweep and clear the UH Hilo campus, the decision was made to have people leave campus until the all clear was given. Campus alert was sent to clear campus at 11:07am.

HPD’s search process of the UH Hilo campus and was able to determine campus was all clear, with alert messaging being sent to campus at approximately 12:27pm.

Today is a reminder to all of us to stay alert to activities on campus. If you see something, say something. The University encourages the prompt reporting of all emergencies, violations, and criminal incidents by calling the police (911) or to UH Hilo Campus Security (808-974-7911).

Mahalo for everyone’s cooperation and understanding today. The decision to close operations for the remainder of the day was not taken lightly, and we understand the impact to the many students, staff, and parents in our campus community. Fortunately HPD was able to do a speedy but thorough search, with up to 40 officers on site at one point.

We are grateful for the diligence of HPD, our Campus Security, and again to you all for responding quickly and appropriately in response to today’s events. Mahalo

Police ask that anyone with information regarding this threat call the Police Department’s non-emergency line at (808) 935-3311.