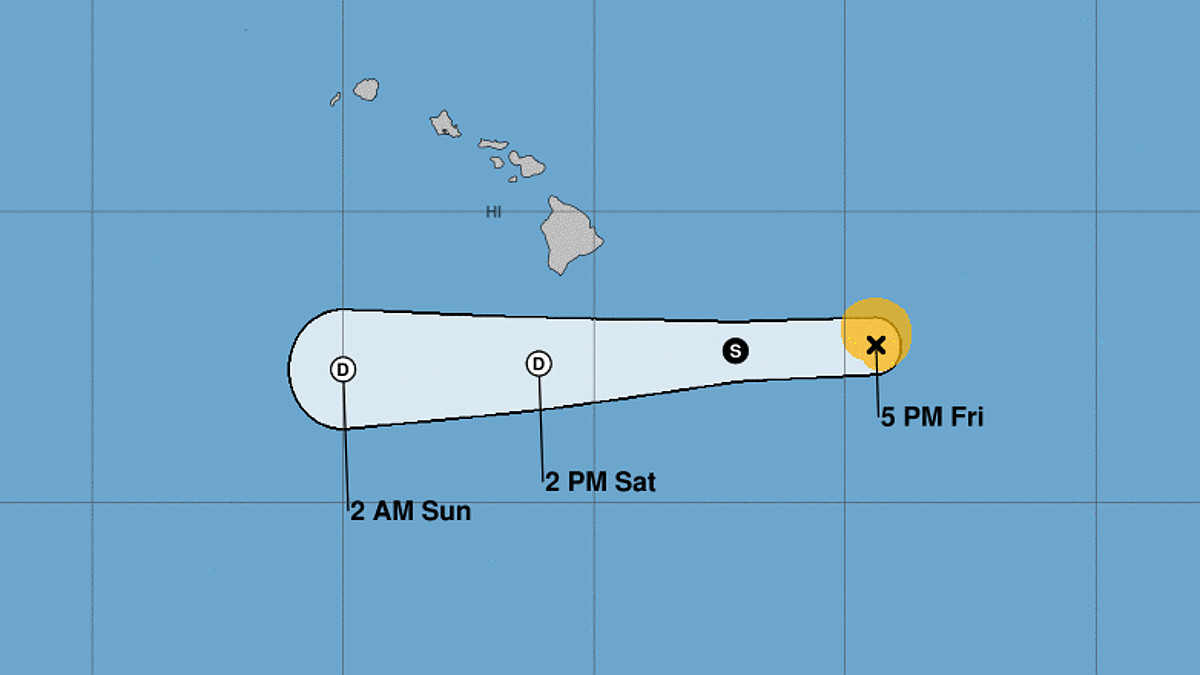 HAWAIʻI ISLAND - Darby is not expected to be a tropical storm as it passes south of the Big Island, but it could still generate rain and surf this weekend.

“Darby is expected to weaken to a remnant low Saturday, before dissipating Sunday,” said the Central Pacific Hurricane Center in Honolulu. “On the forecast track, the remnant center of Darby will pass south of the Big Island Saturday.”

“Large swells generated by Darby are expected to affect portions of the Hawaiian Islands over the weekend,” and bring rains that “may cause nuisance flooding especially in low-lying and poor drainage areas,” the forecasters said.

A High Surf Warning is now in effect for south-facing shores, and a Wind Advisory is in place for much of the Big Island. Multiple beach closures have already been announced.

According to the Hawaiʻi County Civil Defense, the following conditions are expected:

The latest trend in the modeling and the most recent observations has been a slight northward adjustment for Darby as it decays while passing south of the Big Island on Saturday. While this adjustment is not sufficient to change the overall flavor of the event for the Big Island and Maui County, it did warrant an upward nudge in forecast winds. Given the potential early- Saturday start time of stronger trades for the windier areas on these islands, bumped winds up a couple mph and issued a wind advisory beginning at 6am Saturday morning. Additionally, with the mid- level stable layer helping to accelerate winds over the summits, a wind advisory was issued for Haleakala Summit and the Big Island summits as well.

Forecast rainfall remains unchanged and something in the neighborhood of 2-4″ with local maxima up to 5″ appears reasonable for the Big Island. The HRRR still resides firmly on the wetter end of the spectrum with its 18z run while the 18z GFS made a noteworthy move toward the wetter end as well. This was enough evidence to warrant shying away from this morning’s drier hi-res runs. Given that these hi-res models are GFS-initialized, it wouldn’t be entirely surprising if the next round of hi-res guidance came in wetter than the morning runs.

Showers will begin over downslope portions of Windward Big Island early Saturday and will expand upslope as deeper moisture arrives. Low stability in the lowest 12-14kft should help maximize the efficiency of orographic forcing, but ultimately mid-level stability will limit higher end rainfall potential. The duration of heavier rainfall on Windward Maui should limit totals there to 1-2″ during the course of the day. Heavier rain will be possible on a very localized basis as deep moisture advancing over the high terrain during peak heating supports a chance for thunderstorms over both windward and leeward zones.

“We encourage visitors and kama‘āina to ho‘olohe – heed official updates and advice from your local emergency management agency,” said the Hawaiʻi Tourism Authority in an update, “and be cautious in the event of isolated rain, wind and higher surf conditions as the storm tracks south of our islands.”