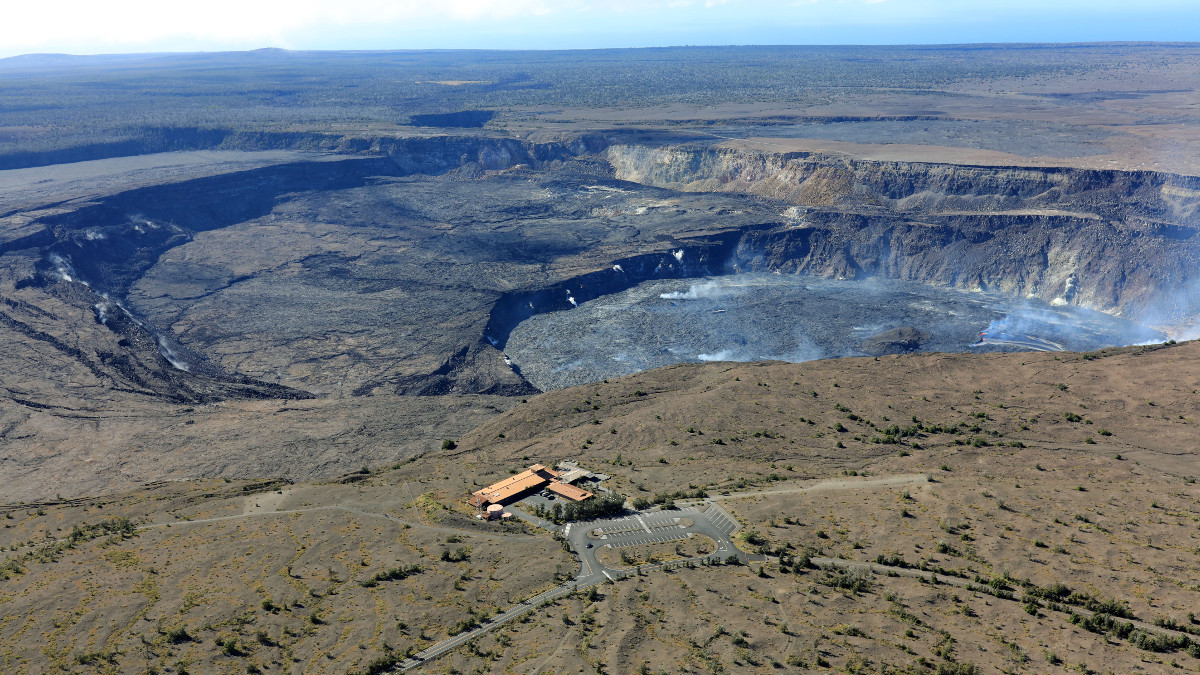 USGS: "Hawaiian Volcano Observatory geologists captured this view of the caldera at Kīlauea summit during an overflight the morning of July 19, 2022. The active lava lake is visible within Halema‘uma‘u crater, the floor of which continues to slowly rise as the eruption continues. The former Hawaiian Volcano Observatory buildings can be seen in the lower center portion of the photo." (USGS image by K. Mulliken) 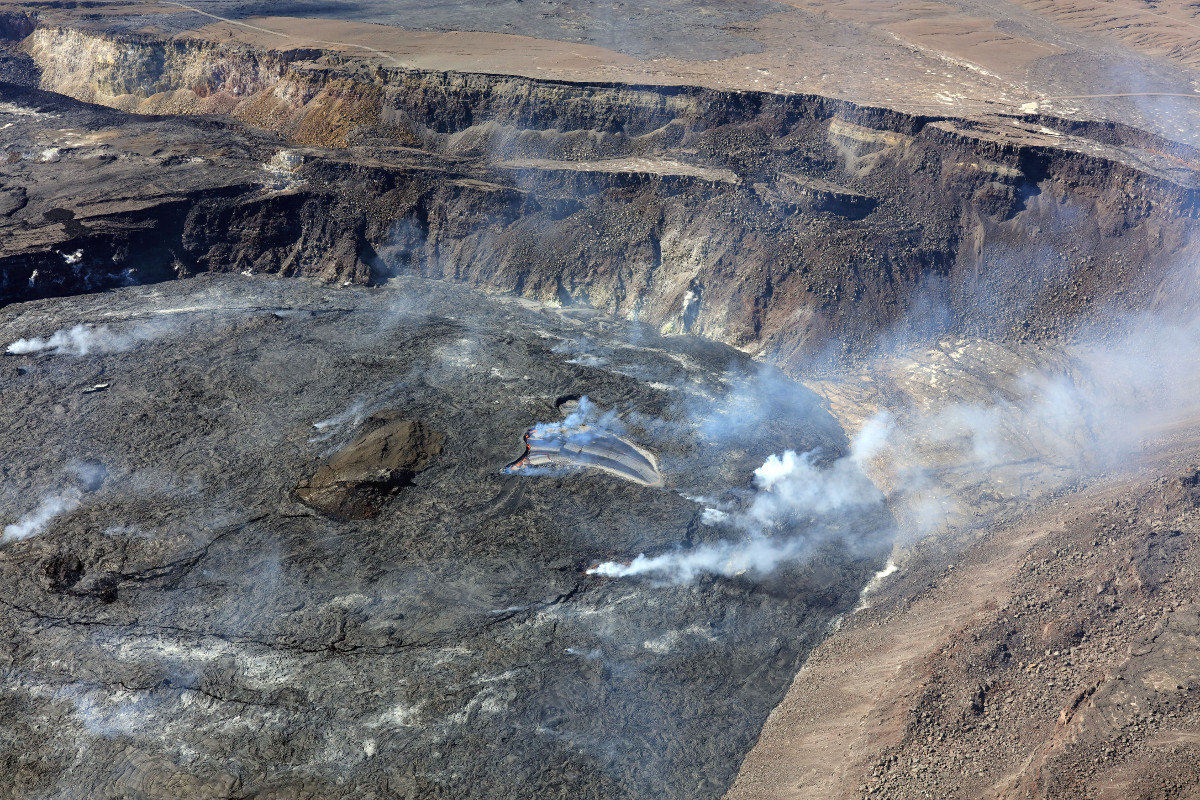 USGS: “An aerial image of the western portion of Halema‘uma‘u crater at the summit of Kīlauea. The active lava lake within the western portion of Halema‘uma‘u crater is visible in approximately the center of the image, and lava spattering is visible along the eastern edge of the lake. This view is from the north side of the crater, and looks generally to the south.” (USGS image by K. Mulliken)

(BIVN) – The Hawaiian Volcano Observatory has published several new photos of Hawaiʻi island volcanoes, which were captured during a geology monitoring overflight on July 19, 2022.

Kīlauea volcano continues to erupt at the summit, with all lava activity confined to Halemaʻumaʻu crater within Hawaiʻi Volcanoes National Park. No significant changes have been noted at the summit or in either rift zone, scientists say.

From the Kīlauea activity update posted by the USGS HVO on Thursday:

Eruption of lava from the Halemaʻumaʻu western vent into the active lava lake has continued over the past 24 hours. The lava level of the active lake surface remained at the level of the bounding levees. Ooze-outs were active along the northern edge of the crater floor starting around 4 pm HST yesterday afternoon and continue at this time. Measurements from an overflight on July 19, 2022 indicated that the crater floor has risen about 133 meters (437 feet) total and that 98 million cubic meters (26 billion gallons) of lava has been effused since the beginning of this eruption on September 29, 2021. Summit tiltmeters began a deflationary trend around 9 am HST yesterday morning and are transitioning to a flat trend now. A sulfur dioxide (SO2) emission rate of approximately 1,300 tonnes per day (t/d) was measured on July 21, 2022. Summit tremor is steady for this eruption’s long term base-line level. 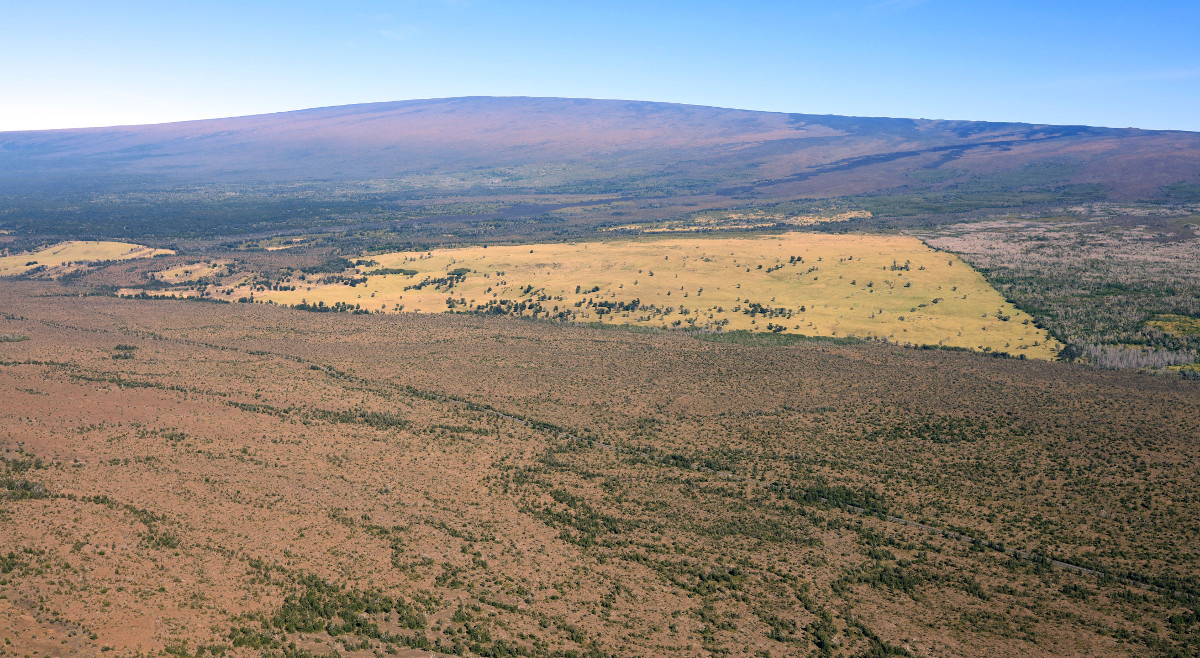 Scientists also captured a view of Mauna Loa, which is not erupting and remains at the ADVISORY / YELLOW alert level and aviation color code. “Rates of seismicity remain slightly elevated above long-term background levels, but have not changed significantly over the past week,” the Hawaiian Volcano Observatory reported. “Other Mauna Loa monitoring data streams—ground deformation, gas concentrations, visual appearance in webcams—show no significant changes of late.”

From the USGS observations posted in a Thursday update:

During the past week, HVO seismometers recorded approximately 98 small-magnitude (below magnitude 3.0) earthquakes beneath the summit and upper-elevation flanks of Mauna Loa. The majority of these earthquakes occurred at shallow depths less than 15 kilometers (9 miles) below sea level.

Global Positioning System (GPS) measurements show steady rates of deformation in the volcano’s summit region continuing through the past week.

Concentrations of sulfur dioxide (SO2), hydrogen sulfide (H2S), and carbon dioxide (CO2), as well as fumarole temperatures, remain stable at both the summit and at Sulphur Cone on the upper Southwest Rift Zone.