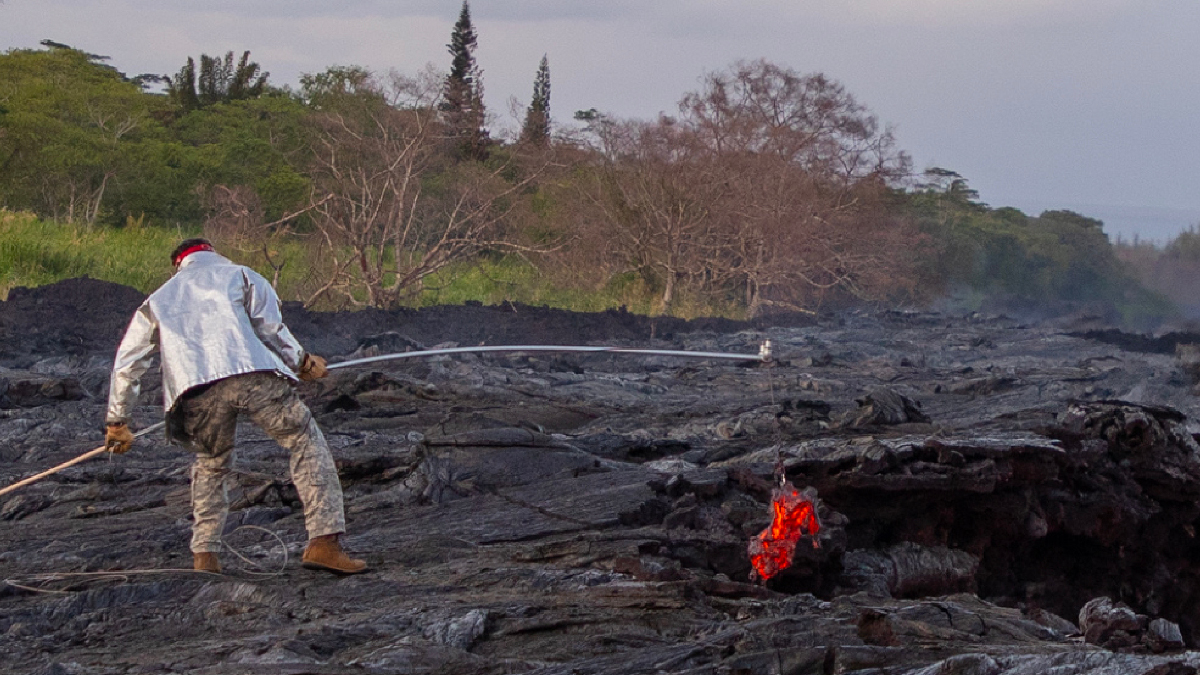 HAWAIʻI ISLAND - Research geologist Frank A. Trusdell recently received the second highest honorary award that can be granted to a career employee by the U.S. Department of the Interior. 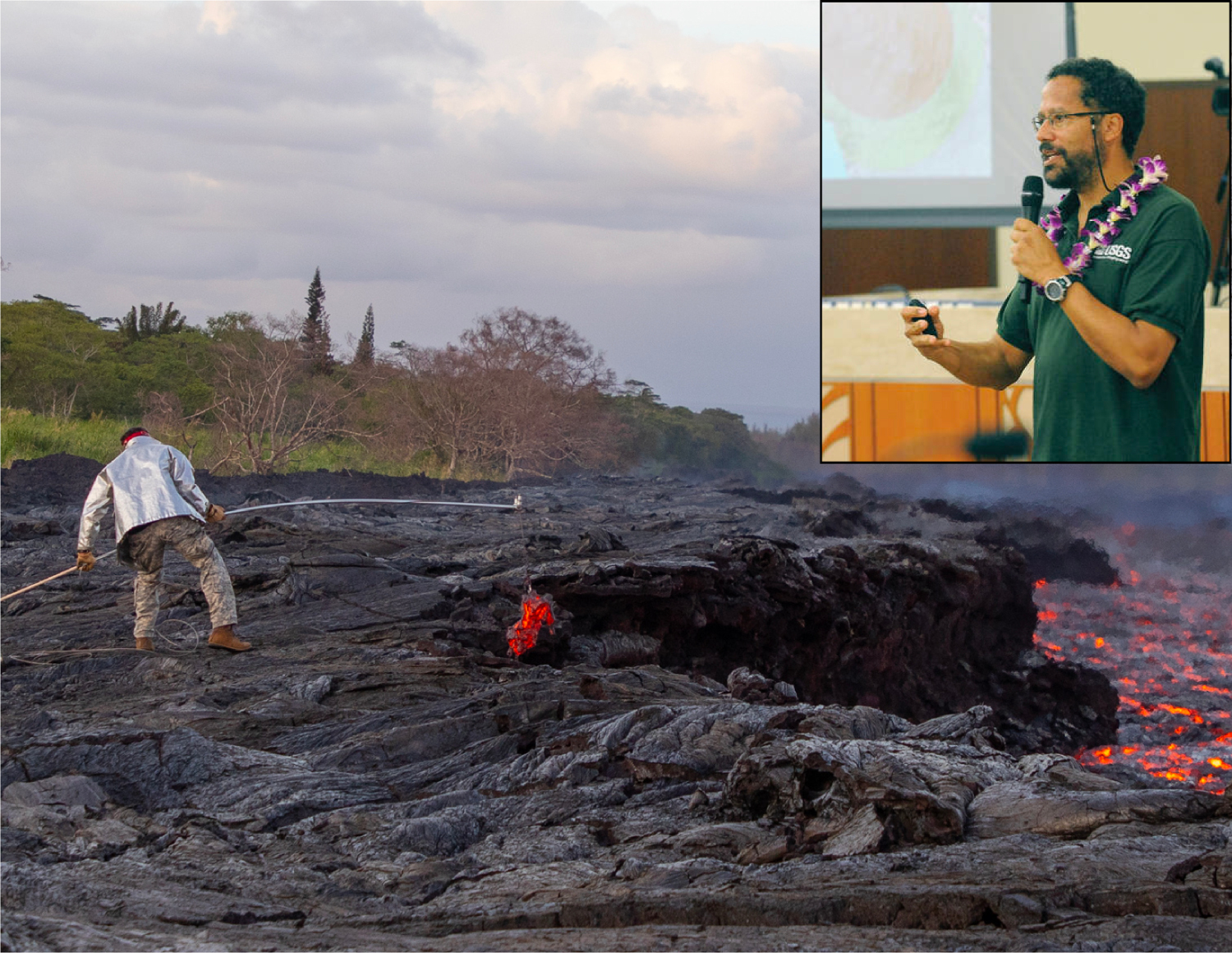 Frank A. Trusdell, a research geologist at the U.S. Geological Survey’s Hawaiian Volcano Observatory (HVO), recently received a Meritorious Service Award, the second highest honorary award that can be granted to a career employee by the U.S. Department of the Interior.

The award is in recognition of his outstanding contributions to the USGS in the field of volcanology, particularly to the understanding of Hawaiian volcanoes, their eruptions, and hazards.

During his decades with HVO, Trusdell’s work has included a wide range of field-based studies and the production of detailed geologic maps of Mauna Loa, the largest active volcano in the world. To date he has completed four of five maps, each encompassing an area of Mauna Loa from its summit to sea level. These geologic maps, which provide information on the long-term eruptive behavior of the volcano, are available under “Geologic Maps” on HVO’s Mauna Loa Publications webpage.

Trusdell also led the effort to create and publish lava inundation zone maps for Mauna Loa. These nine maps, which identify parts of the volcano that could erupt and send lava flows downslope, provide information that will help emergency managers identify people, property, and facilities at risk during future Mauna Loa eruptions.

The award citation states that, “In addition to being the world’s authority on Mauna Loa, Mr. Trusdell’s meticulous investigations of eruption histories and volcano structure have also made him a foremost expert on Kīlauea and Hualālai volcanoes.” It further states that during periods of volcanic unrest in Hawaiʻi, Trusdell’s “calm demeanor and decades of experience critically informed HVO hazard assessments shared with the public and emergency managers.”

In addition to his work in Hawaiʻi, Trusdell has led USGS responses to volcanic crises in Ecuador, Alaska, the Cape Verde Islands, and the Commonwealth of the Mariana Islands. His role in these responses was to evaluate and quantify volcanic hazards.

The citation also commends Trusdell for his dedication to the next generation of geoscientists, noting that “his efforts to engage students and early-career scientists has strengthened the USGS and professional geologic community.” Throughout his federal service, Trusdell has mentored more than 50 students, visiting scientists, and volunteers. Under his direction, these aspiring professionals were able to experience working in a busy volcano observatory, witness eruption crises, engage with HVO scientists, and, in many cases, complete published studies.

Trusdell managed HVO’s volunteer program for 10 years, during which he reviewed applicants (both domestic and international) and then guided selected volunteers as they learned about volcano monitoring. The award citation notes that the “far-reaching impacts of his dedication are reflected by the accomplishments of his protegees, many of whom have gone on to receive advanced degrees and accept positions with the USGS or universities.”

Trusdell, who grew up on Oʻahu, was also praised for his efforts to significantly increase the participation of minority youth in the earth sciences. The citation acknowledges that this is particularly important in Hawaiʻi, where the volcanic landscape and Hawaiian culture are inextricably intertwined.

Throughout his career, Trusdell has readily contributed to HVO’s outreach efforts. In addition to presenting countless talks in public programs, like those during Volcano Awareness Month, he has also participated in numerous community meetings during times of volcanic crisis to keep the public informed about the eruption.

Trusdell began his USGS career as a student intern at HVO, coincidentally just one day after Mount St. Helens, Washington, erupted in 1980. Forty-plus years later, when asked about highlights from his time at HVO, he replied, “Working with great people; monitoring eruptions on Mauna Loa (1984) and Kīlauea (1982‒2022), as well as volcanoes beyond Hawaiʻi; mapping the submarine flanks of Mauna Loa; and mentoring up-and-coming volcanologists.” Today, Trusdell shares his vast experience with HVO’s team of research and operational geologists as their supervisor, a role that he accepted in 2020.

Congratulations, Frank! Your DOI Meritorious Service Award is well-deserved recognition for your many years of outstanding service to the USGS and HVO.