Video courtesy USGS Hawaiian Volcano Observatory and National Park Service. A synthesized voice was utilized in the narration for this story.

HAWAIʻI VOLCANOES NATIONAL PARK - For the entire ten-month eruption, all lava activity has been confined to the Halemaʻumaʻu crater within Hawaiʻi Volcanoes National Park. 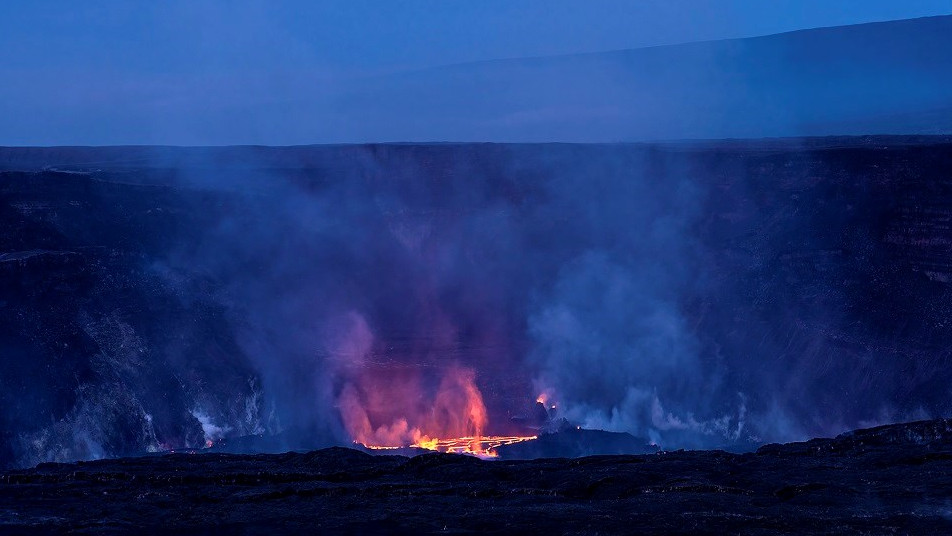 (BIVN) – The eruption of Kīlauea volcano continues at the summit, and today marks ten months since the beginning. All lava activity remains confined to Halemaʻumaʻu crater within Hawaiʻi Volcanoes National Park, and scientists say this scenario is likely to continue. No unusual activity has been observed along the East Rift or Southwest Rift Zones.

On September 29, 2021, a series of fissure vents opened at the Kīlauea caldera; the first active lava to appear at the summit since the previous eruption ended in May of that same year. The eruption was immediately preceded by about an hour of elevated seismicity beneath Halemaʻumaʻu. Fountains shot high into the sky, and began feeding a new lava lake on top of the one created during the previous eruption.

In less than a week, activity became focused at two vents. One in the western wall of Halemaʻumaʻu, and one in the south central portion of the lava lake. By October 7th, the western-vent was the dominant source of erupting lava.

In November, the eruption reached a milestone, as the lava level became high enough to creep out onto the lowest down-dropped block in Halemaʻumaʻu crater. The active lava was also visible from public vantage points inside the National Park for the first time since 2018.

By December, the eruption had entered into a start-and-stop pattern, that seemed to correlate to inflation and deflation recorded at the summit. The eruption paused 24 times, for periods ranging from two hours to nearly two days. During each pause, the active lava lake surface would drop. Some scientists suspected the eruption would not last much longer.

But a few months into 2022, the effusion of lava became steady. Spatter cones appeared on the solidified surface of eastern portion of the crater floor, and ooze-outs and lava cascades were frequently observed.

By the end of July, the Hawaiian Volcano Observatory reported that the crater floor has risen about 133 meters – or 437 feet – since the start of the eruption, and that a total of 98 million cubic meters of lava – the same as 26 billion gallons – has been effused in that time.