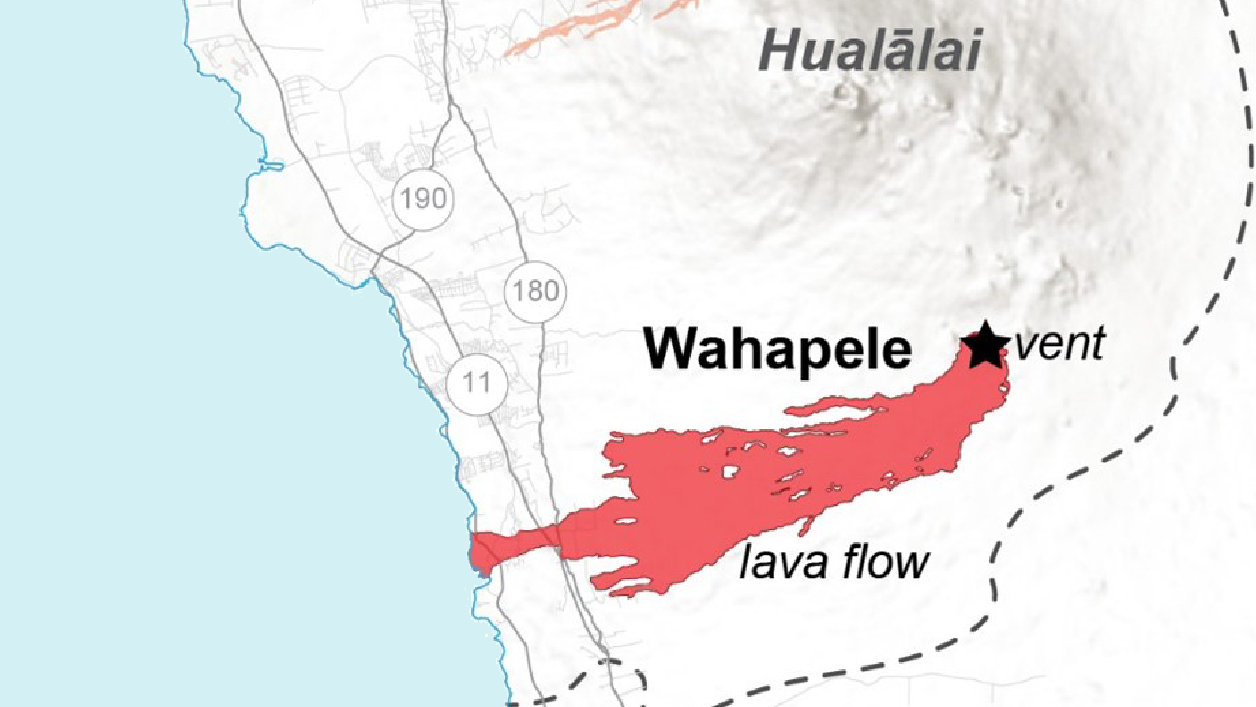 Inset of USGS map showing the location of the Wahapele vent and lava flow on Hualālai volcano. Full map below. 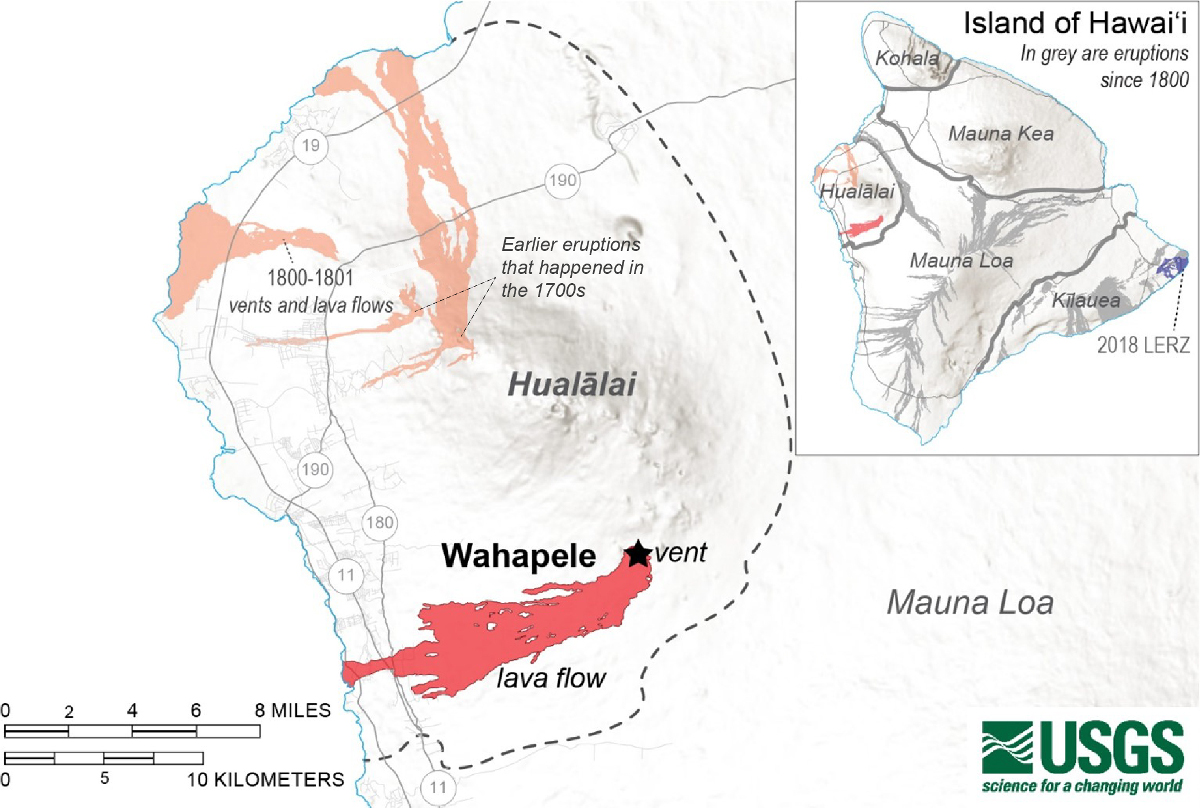 USGS: “This map shows the location of the Wahapele vent (star) and lava flow (red) on Hualālai volcano. The approximate boundary between Hualālai and Mauna Loa is indicted by a dashed line. The lava flow extends 2 kilometers (1.25 miles) farther into the ocean. The inset map shows the entire Island of Hawaiʻi, with approximate volcano boundaries indicated with a thick grey line. All eruptions since 1800 are shaded grey, with the exceptions of Kīlauea’s 2018 lower East Rift Zone eruption (blue) and Hualālai’s recent eruptions (1800-1801 and earlier, in peach). Geology is from Sherrod and others (2021).”

Hualālai erupts much less often than its neighbors, with centuries rather than years or decades separating eruptions. The most recent documented activity was an earthquake swarm in 1929, which likely corresponded to an intrusion of magma into the volcano. Its most recent eruption occured in 1800–01, and the erupted lava flows from 1800–01 underlie almost the entire Ellison Onizuka Kona International Airport at Keāhole. Future eruptions from Hualālai may pose a direct threat to Kailua-Kona and the surrounding communities.

The source of this eruption was Wahapele crater, a vent on the south flank of Hualālai at 1,540 meters (5,053 feet) elevation. The eruption started with the building of the Wahapele spatter cone. It grew to be about 700 meters (765 yards) across—slightly smaller than Maunaulu—with a shallow slope. During this first phase there were a few short lava flows, both ʻaʻā and pāhoehoe.

The eruption then turned violent. Part of the cone collapsed, similar to how part of Puʻuʻōʻō collapsed in 2018. However, unlike what happened at Puʻuʻōʻō, at Wahapele, this collapse led to an explosive phreatic eruption. A phreatic eruption happens when magma mixes with and heats groundwater to steam, causing an explosion, or more often, a series of explosions. It is unclear how long this phase of the eruption lasted—it could have been a few days or longer. A similar eruption at Kīlauea in 1924 lasted 18 days.

What we do know is that rock fragments ejected during this phase covered at least 10 square kilometers (roughly 4 square miles, or nearly 2500 acres)—equivalent to the area of Kaluapele, Kīlauea’s summit caldera. Some of the rock chunks were half a meter (about a foot and a half) across! Finer grained material was also produced, and in places these deposits reached a thickness of 3 meters (yards).

After the explosive phase of the eruption, a smaller cone was formed within the cone of the first phase. This new cone was about 400 meters (a quarter mile) across. At the same time, a large ʻaʻā flow headed west, reaching the ocean about 16 kilometers (10 miles) away. At its widest point, the flow was just under 5 kilometers (3 miles) across. Submersible dives in the 1980s suggest that this flow continued for about 2 kilometers (1.25 miles) into the ocean.

On land, the vent area and lava flows from the Wahapele eruption cover slightly more than Kīlauea’s 2018 lower East Rift Zone eruption. It is about three-quarters the area of the 1800–1801 eruption, and is the third largest known for Hualālai in terms of area covered. A caveat: most older flows are at least partially covered by more recent flows, so we do not know their full extent—some flows may be much more extensive than their mapped extent, and could be bigger than the Wahapele eruption.

Compared to Kīlauea and Mauna Loa, Hualālai poses a different challenge for monitoring changes in activity. Hualālai’s magma chamber sits 20–30 km (12–19 miles) beneath the surface, about 10 times deeper than the magma chambers of Kīlauea or Mauna Loa. Magma chambers this deep rarely cause surface deformation, so there may not be much warning prior to an earthquake swarm triggered by magma moving to the surface. Evidence from the 1800–01 eruption suggest that magma can move from depth to the surface in less than a day. While this is a worst case scenario, it is good to be prepared in case of any hazardous event, including eruptions, hurricanes, floods, or fires. We currently do not see any indication of volcanic unrest at Hualālai, but we encourage residents to subscribe to the Volcano Notification Service to stay informed.