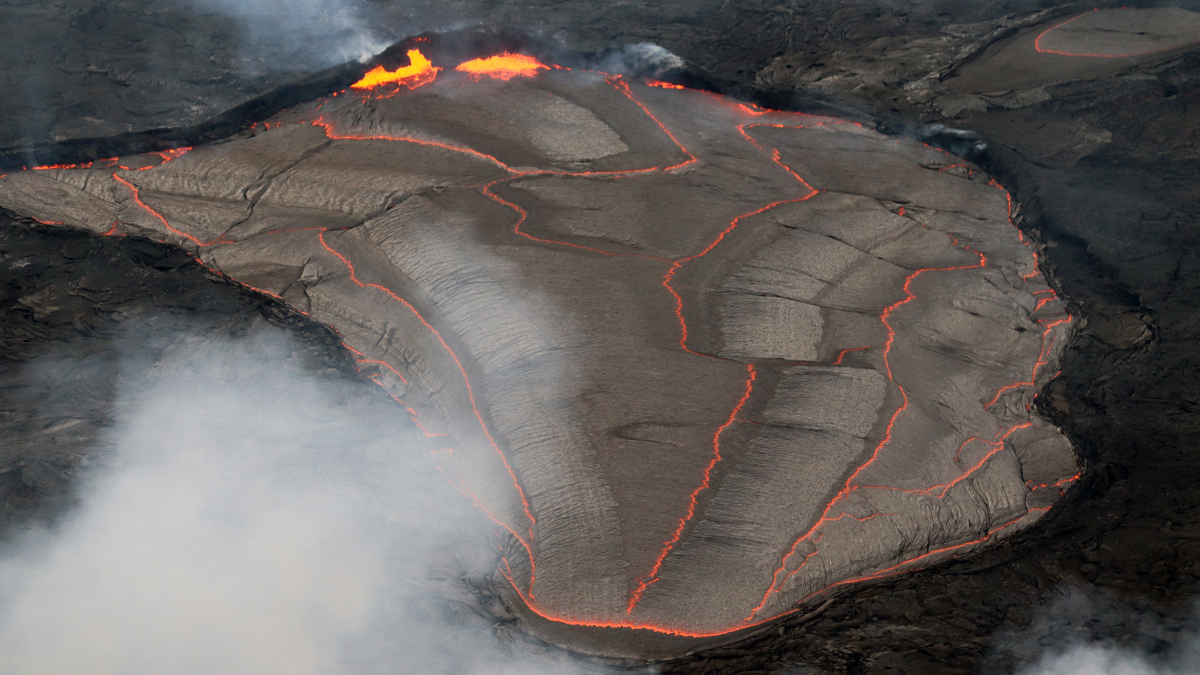 USGS: "Lava lake activity continues in Halema‘uma‘u, at the summit of Kīlauea. This photo looks east, and shows that on June 24, the lava level was near the rim of the lake, with spattering along the east margin." (USGS photo by M. Patrick)

HAWAIʻI VOLCANOES NATIONAL PARK - The “endogenous” process observed in the refilling of Halemaʻumaʻu is "akin to inflating a giant air mattress".

(BIVN) – A dramatic uplift of the Kilauea caldera floor has been captured by scientists in a new timelapse video. Lava is refilling the enormous depression that was created during the summit caldera collapse in 2018, as the 10-month volcanic eruption continues.

Shortly after the timelapse video was published, the USGS Hawaiian Volcano Observatory provided some more information in its weekly Volcano Watch article:

The ongoing eruption at the summit of Kīlauea hasn’t made the news recently, but that doesn’t mean the recent eruptive activity hasn’t been noteworthy. It’s just been operating quietly in the background, without much fanfare.

In fact, the slow and steady lava lake activity in Halemaʻumaʻu crater has been quite fascinating, so it deserves another “Volcano Watch” visit.

The first thing to appreciate is that we are witnessing a pattern that has typified Kīlauea’s summit behavior for centuries—the cycle of collapse and refilling. The caldera floor collapses and/or subsides—often due to an eruption on the rift zone—and subsequent summit eruptions fill the depression with new lava. Destruction and reconstruction, set on repeat.

Numerous cycles of collapse and refilling occurred during the 1800s and early 1900s. These ranged from large to small, some spanning much of the caldera floor, with others limited to just the Halemaʻumaʻu area. In each instance, lava eventually returned to the summit and filled much or all of the depression.

The collapse of the crater floor in 2018 was one of the largest such events in the past 200 years. Over the past year and a half, lava has been erupting in Halemaʻumaʻu crater and slowly refilling the new depression. Since returning to Halemaʻumaʻu in December 2020, lava has refilled about 17% of the volume of the 2018 collapse.

Watching the current activity is like having a time machine to an earlier century on Kīlauea.

The second thing that is interesting about the current activity is the manner in which the lava is refilling the crater. In the simplest scenario, we might imagine the lava in Halemaʻumaʻu simply pouring in over earlier flows, stacking up and filling the crater.

While a portion of the refilling is being done in this manner, a major amount of the refilling is “endogenous.” In other words, lava from the vent is supplied beneath the solidified surface crust, out of view, lifting the crater floor. It’s akin to inflating a giant air mattress.

We can track this growth with unprecedented detail using modern tools. A continuous laser rangefinder measures the lava surface every second, with centimeter precision. Webcams operating on the rim of Halemaʻumaʻu show the nature of uplift clearly.

The process of endogenous growth is particularly well illustrated with the webcam on the east rim of Halemaʻumaʻu (the B1cam). Timelapse images from this webcam show the central portion of the crater floor is being lifted like a piston, intact and largely without fracturing. 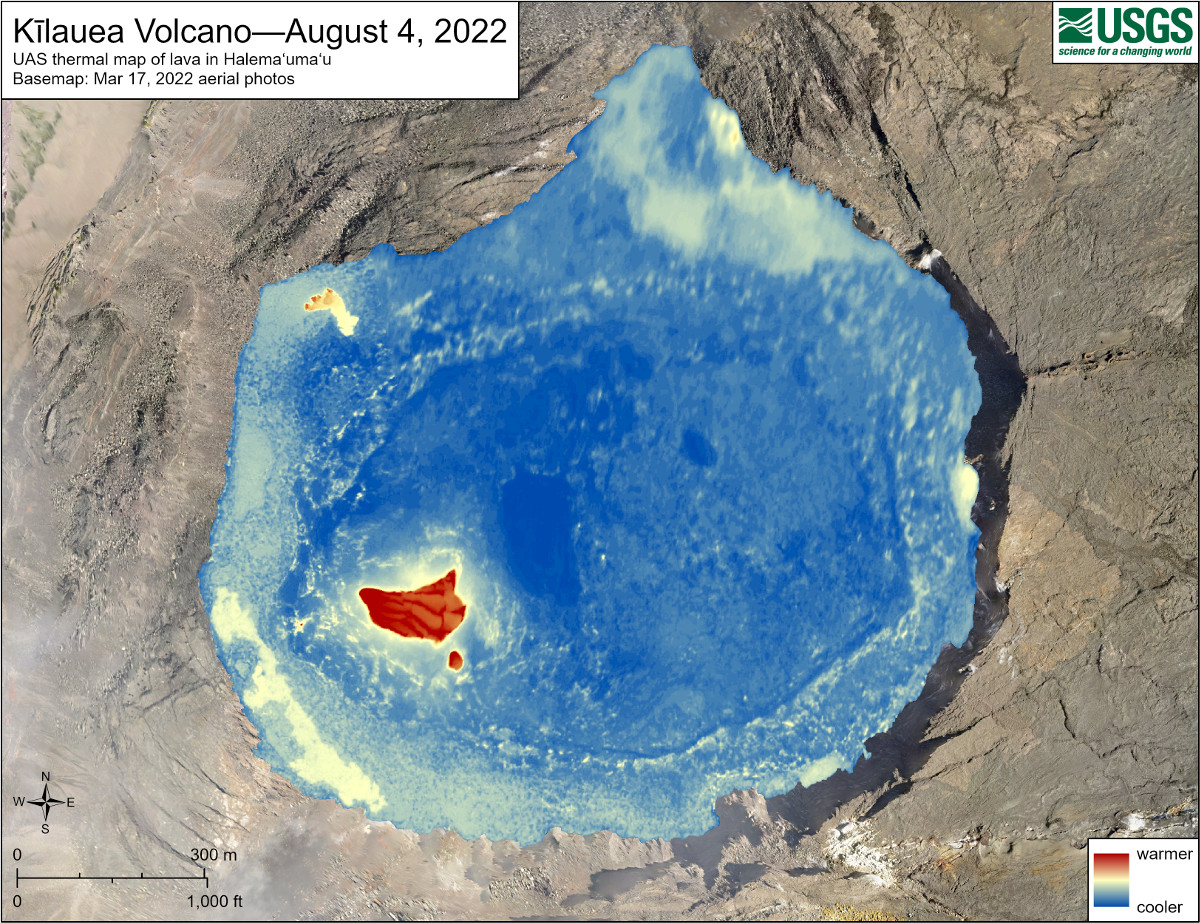 USGS: “Uncrewed aircraft systems (UAS) flights on August 4, 2022, allowed for aerial visual and thermal imagery to be collected of Halema‘uma‘u crater at the summit of Kīlauea. The active lake surface is limited to the western portion of the crater. The scale of the thermal map ranges from blue to red, with blue colors indicative of cooler temperatures and red colors indicative of warmer temperatures.”

Around the perimeter of this central portion of the crater floor, a series of large cracks have developed. Beyond the cracks, along the margins of the crater floor, the behavior is more complex than simple piston-like uplift. This outer region is often tilted and deformed from the endogenous growth below.

At the same time, this zone along the margins of the crater floor is often resurfaced due to ooze-outs—basically lava that is squeezed out from beneath the crater floor, onto the surface.

This type of endogenous growth, or “bodily uplift,” was also observed in the 1800s and early 1900s. But it hasn’t been observed so much in the past hundred years on Kīlauea. And it certainly hasn’t been observed this clearly before, given our modern tools such as laser rangefinders and webcams.

You can bear witness to this important phase in the lifecycle of Kīlauea, and a fascinating period in Hawaiian volcanism. Volcano watchers on the Island of Hawaiʻi can see the summit lava lake filling Halemaʻumaʻu crater by visiting the public viewing areas in Hawaiʻi Volcanoes National Park. For those off island, Hawaiian Volcano Observatory webcams showing the lake and crater are operating 24/7 on the HVO website.