Video by Hawaiʻi DLNR, edited by BIVN. A synthesized voice was utilized in the narration for this story.

HAWAIʻI ISLAND - Officials say the fire "actually started several weeks ago on the Pohakuloa Training Area," but lay dormant until this week’s "high winds whipped it into a frenzy." 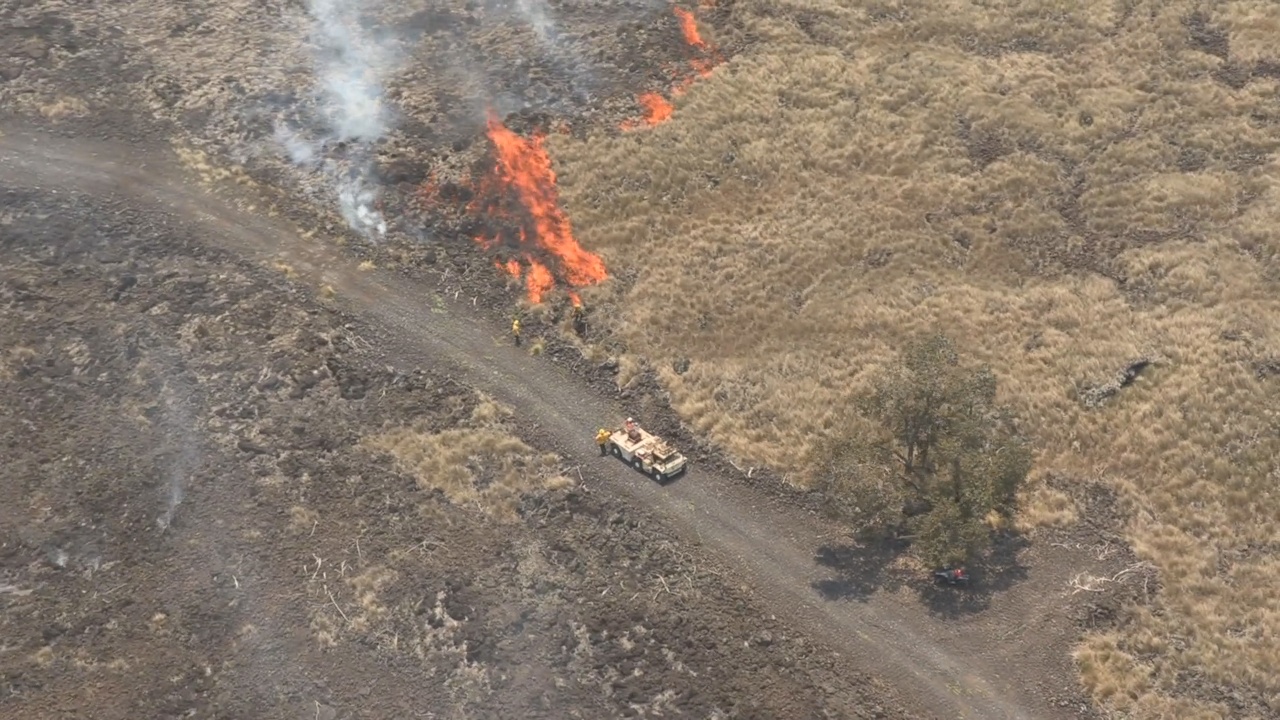 (BIVN) – In a Thursday afternoon update, Hawaiʻi officials said they were “preparing for a prolonged, intense firefight,” as the blaze burning west of the Daniel K. Inouye Highway and south of State Highway 190 continues to grow.

“This is an all-hands effort,” said Steve Bergfeld, the Hawai‘i Island Branch Manager for the DLNR Division of Forestry and Wildlife. “We’re watching the winds this afternoon, send towering columns of smoke into the air.”

Officials say the fire has thus far been burning “mostly in invasive fountain grass,” and “is not currently endangering any private property or homes and eventually may be contained by lava flows.” 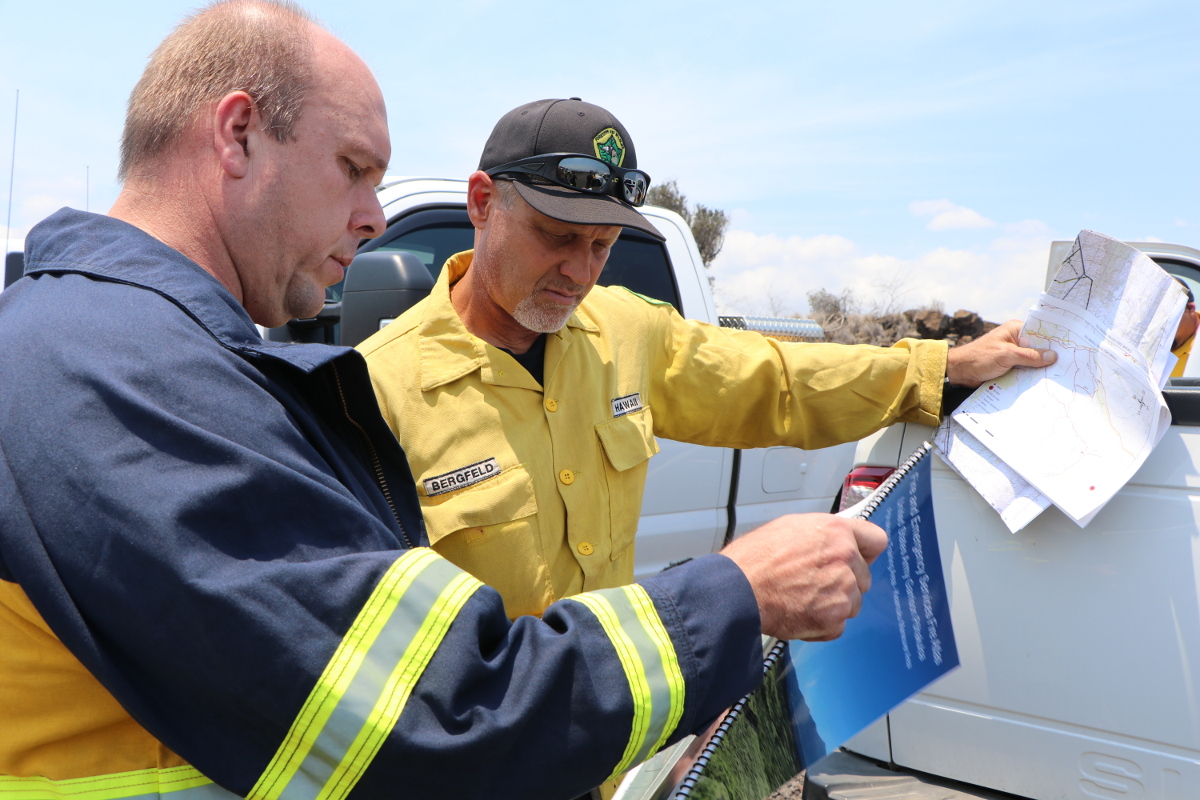 A Hawaiʻi DLNR media release – which was distributed with new photos and videos of the fire, recorded from the air and the ground – has named the blaze the “Leilani fire”. Officials say the fire “actually started several weeks ago on the Pohakuloa Training Area,” but no smoke was visible, “as the fire apparently lay dormant until this week’s high winds whipped it into a frenzy.”

Currently, wildland firefighters from the DLNR Division of Forestry and Wildlife (DOFAW), the federal PTA fire department, the U.S. Fish and Wildlife Service, National Park Service, the Hawai‘i Fire Dept. (HFD), and Hawai‘i County Department of Public Works are on the lines or serving in support roles.

A total of 33 firefighters are getting support from nine private contract bulldozers, being used to build fire line around the perimeter of the fire; and two HFD helicopters. Across the day the choppers have flown multiple missions, taking 80-gallons of water at a time from portable dip tanks, and flying them to the active fire area to try and cool it down.

By the end of today, the U.S. Army will have a total of five helicopters engaged in the battle to bring the fire under control. 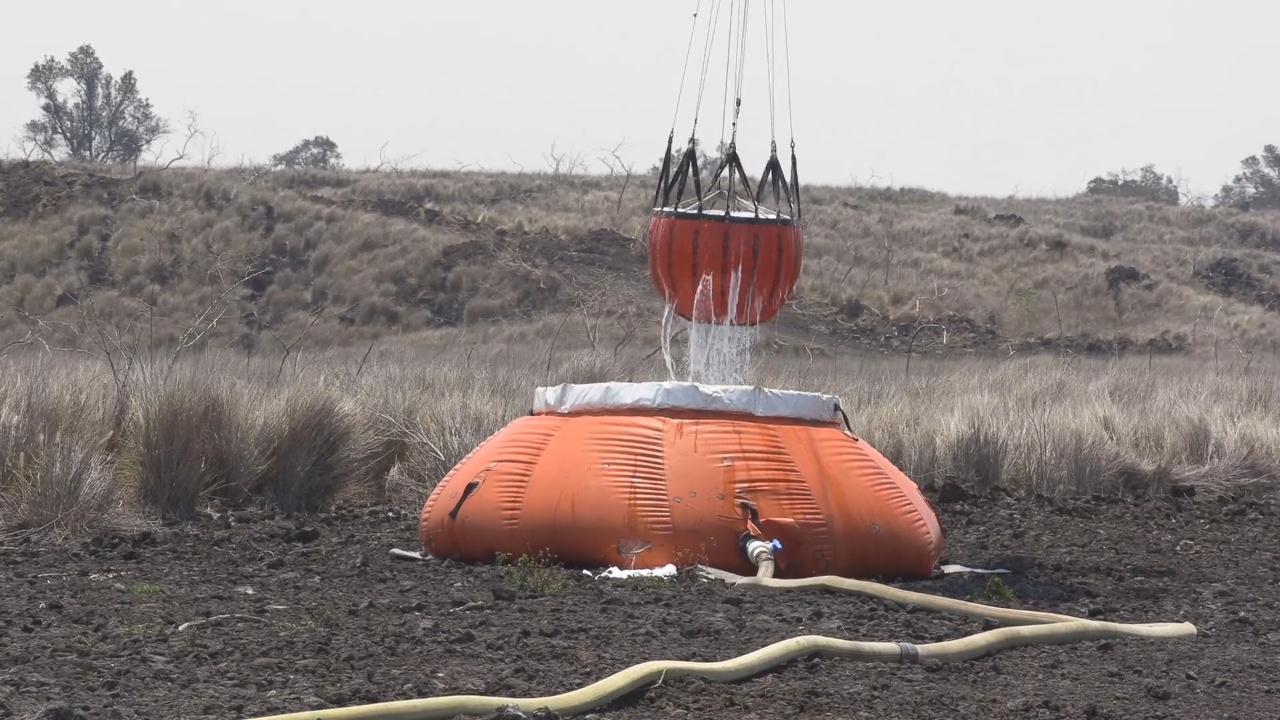 Officials note that the current fire comes one year after the massive Mana Road Fire that scorched some 40,000 acres in July and August 2021. “That fire and this one demonstrate the mutual aid and unified command system utilized on Hawai‘i Island,” the DLNR wrote.

UPDATE – (3:45 p.m.) – Hawaii Fire Department reports the brush fire “has not spread beyond this morning’s position of 1 mile from Highway 190 and 3 miles from Puʻuanahulu.”

No structures are threatened and all roads are open at this time, officials say.

Additionally, the Red Flag Warning and Fire Weather Watch issued by the National Weather Service for leeward areas of Hawaiʻi island have expired.