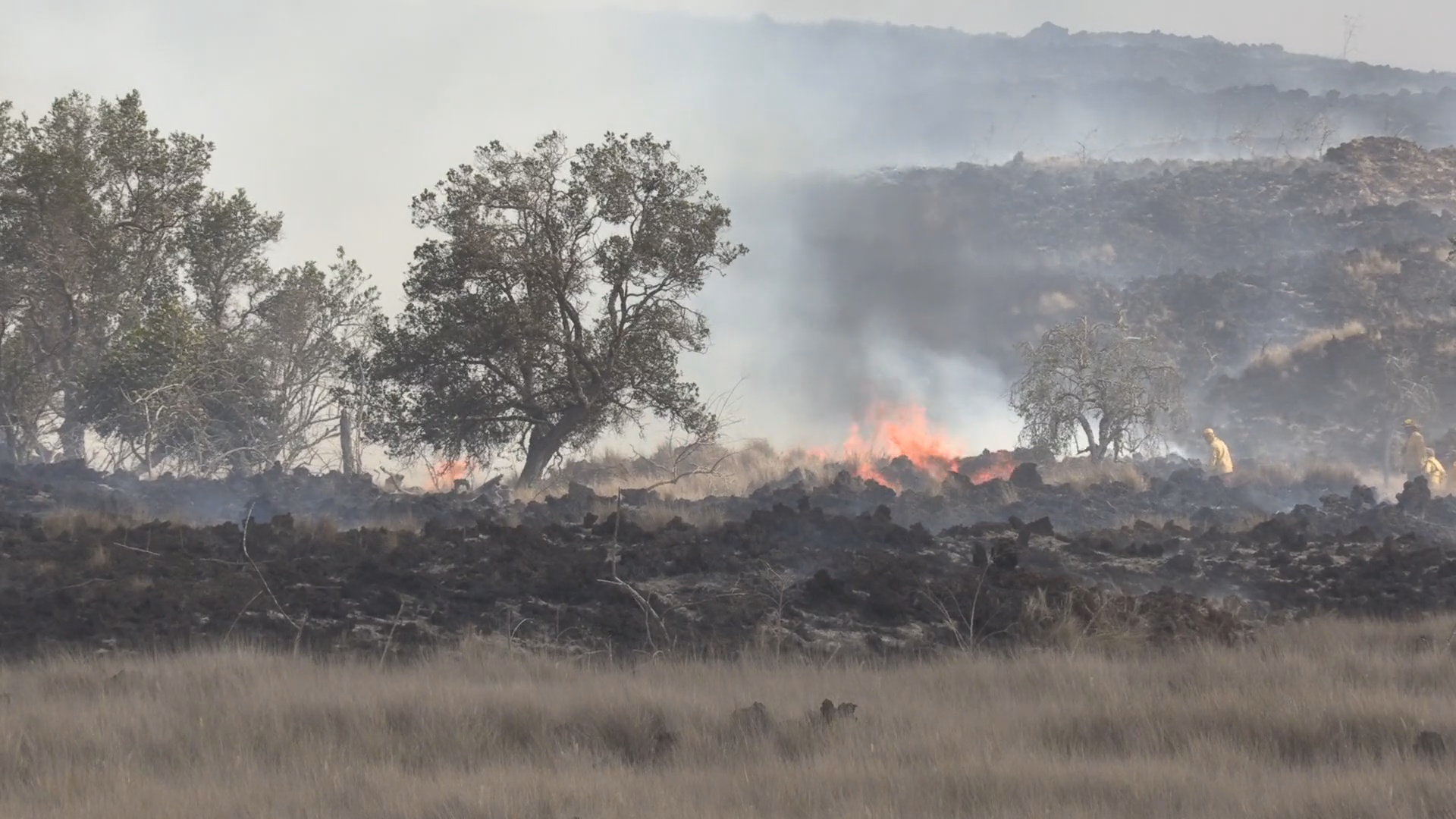 HAWAIʻI ISLAND - There has been a week-long effort by State, County and Federal agencies to contain the 17,000-acre wildfire mauka of Highway 190 near the Puʻu Lani Subdivision. 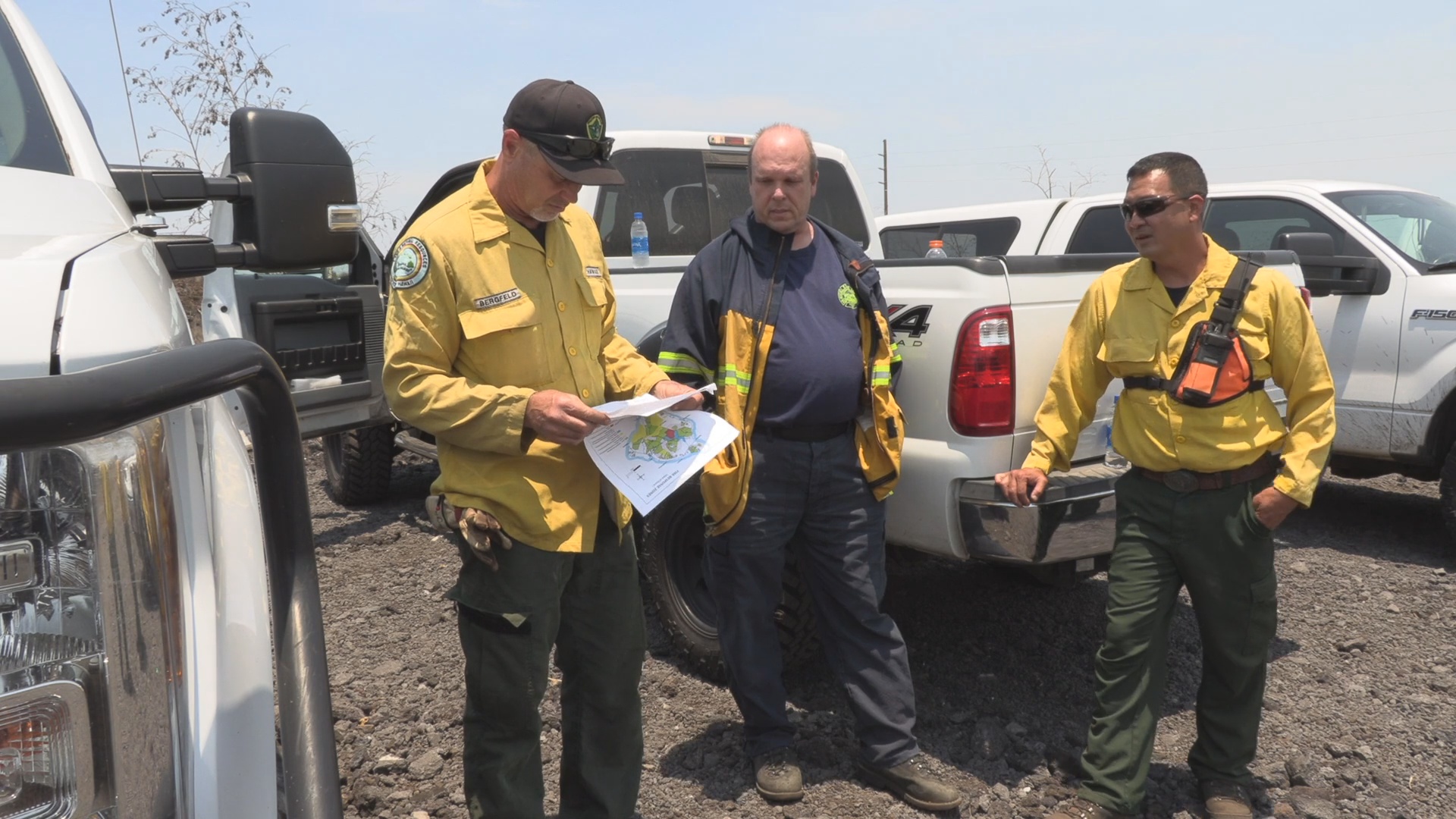 (BIVN) – The Hawaiʻi Department of Land and Natural Resources provided an update on the 17,000-acre wildfire that started weeks ago within the Pohakuloa Training Area, reporting that the blaze is on the verge of being entirely contained.

Just south of Waikōloa Village, the resort area, and mauka of Highway 190 near the Puu Lani Subdivision, a 17,000-acre wildfire has left a charred landscape. That’s 26.5-square-miles of burned land, that dozens of firefighters, supported by heavy equipment and air assets, have worked a week to extinguish. Today, they achieved 90 percent containment of the fire.

“It’s possible, we could see another re-kindle of this fire, as that’s what started it in the first place. The Pōhakuloa Training Area (PTA) federal fire department, first put out a fire here, three-weeks ago. We believe hot spots lay dormant under the ground, and then high winds whipped it up into the major fire, we’ve all been fighting for the past week,” explained Lt. Col. Kevin Cronin, the PTA Commander.

Steve Bergfeld, an experienced wildland firefighter, and Hawai‘i Island branch manager for the DLNR Division of Forestry and Wildlife (DOFAW), said “DOFAW firefighters, joined by PTA, Hawai‘i Fire Department (HFD) and National Park Service (NPS) teams found it difficult to initially slow the fire due to the high winds, the presence of highly flammable & fire adapted fountain grass, and the difficult terrain and access. We will continue to monitor the fire, but smoldering and unburned pockets of fuel within the firebreaks will continue to burn until we receive adequate rainfall.”

Bergfeld added, “Without a small army of eight private bulldozers, contracted by the State, and one Department of Public Works bulldozer this fire would have grown much larger. The fire lines cut by dozers are intended to remove the fire of fuels, to stop its spread. Most often, line crews then backfire from the firebreaks to further eliminate fuels.

At its most active point the work on the ground was supported by five U.S. Army Helicopters, requested by PTA, HFD’s two helicopters, and a private aircraft contracted by DOFAW.

With the capacity to dip and carry between 80 and 1000 gallons of water each flight (depending on aircraft type) right to where the fire was burning the hottest, the “aerial assets” provide a multitude of other services during a firefight.

Don Yokoyama, a DOFAW protection forester, was one of the fire managers who relied on overflights of the fire, typically first thing each morning and then again in the evening, to check on its behavior and to use GPS and other tools to get size and containment estimates.

“As the Operations Section Chief on the fire the overflights allow me to get the fire’s current and expected fire behavior. That information is critical to place and divert fire crews, air assets, and heavy equipment in strategic locations where they can suppress the fire efficiently and effectively and still be safe,” Yokoyama said.

“We are fortunate to have, one of our helicopters stationed about a 7-minute flight from its base off Highway 90,” said HFD Chief Kazuo Todd. “Our firefighting partnership on Hawai‘i Island is so strong, we are accustomed to deploying all available assets for wildfire suppression. Aircraft are such valuable tools – they drop water, can be used for medivac, to assess fire spread, behavior, and size; and as a platform from which to provide photographs and video of fires. Visuals are in high demand for communicating fire information.”

A unified command structure was almost immediately set up to manage the Leilani fire, with command responsibilities shared by leaders from DOFAW, PTA, and HFD. “During a firefight, the agency with jurisdiction takes the lead. This fire was under both PTA and DOFAW jurisdiction. Bergfeld commented, “When it’s burning, our full focus is putting the fire out to protect private property, natural resources, and lives,” he said.

While saying the fire is mostly “contained,” they’re not ready to call it “controlled” just yet. Incident commanders want to be as sure, as they can be, this time the fire is out.