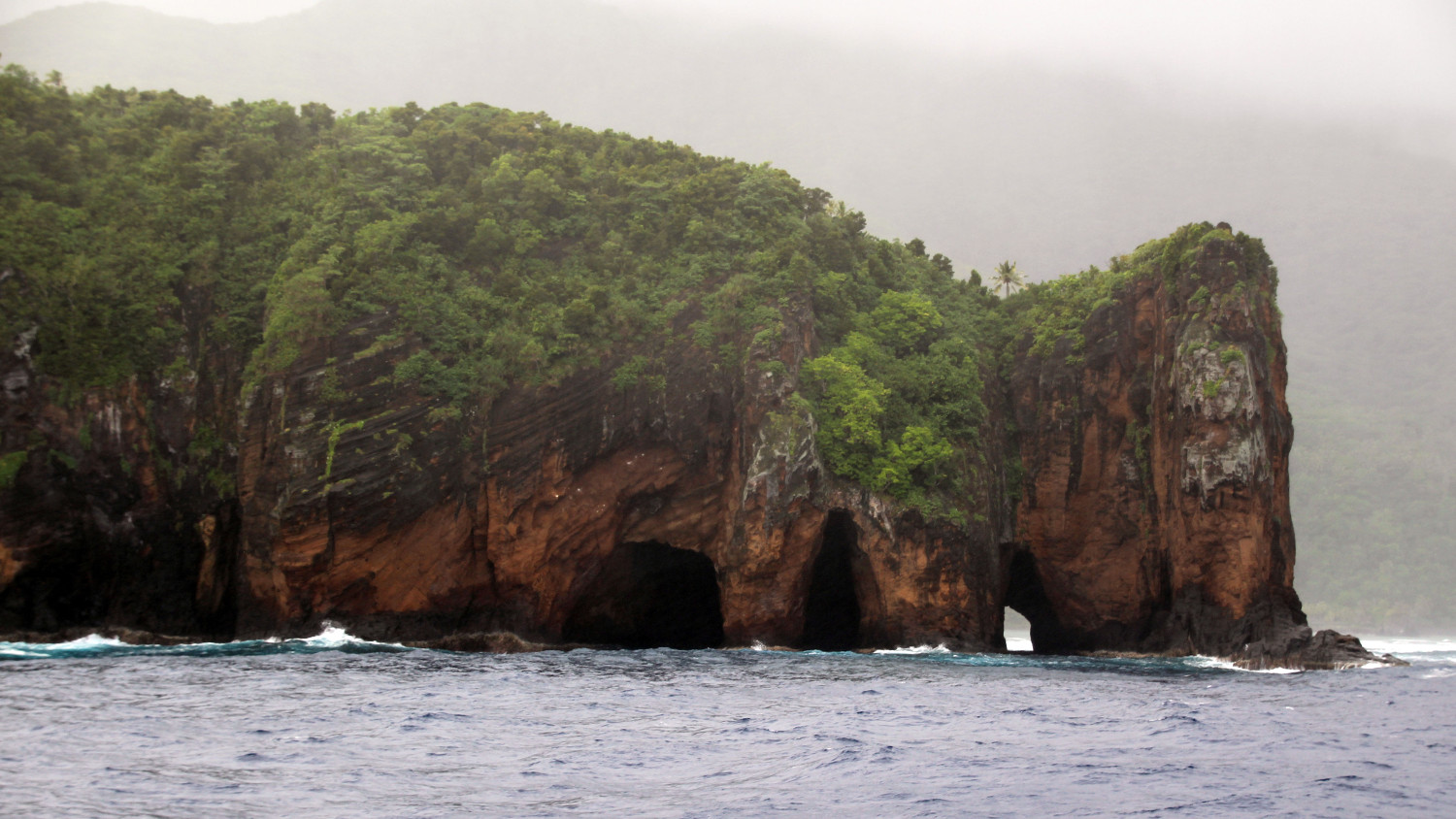 USGS: "View of south part of western side of Nuʻutele Island, off the west coast of Ofu Island in the Manuʻa Islands, American Samoa. Nuʻutele Island is an eroded tuff cone of Ofu-Olosega volcano. A tuff cone can form when magma and water interact at shallow depths, causing localized explosions. The layers exposed within the unvegetated cliff are the result of individual explosions during the eruption that created this tuff cone. The age of the eruption which formed Nuʻutele Island is thought to be Holocene (erupted within the last 12,000 years). After the eruption, ocean waves and currents eroded part of the tuff cone." (USGS photo by N. Deligne) 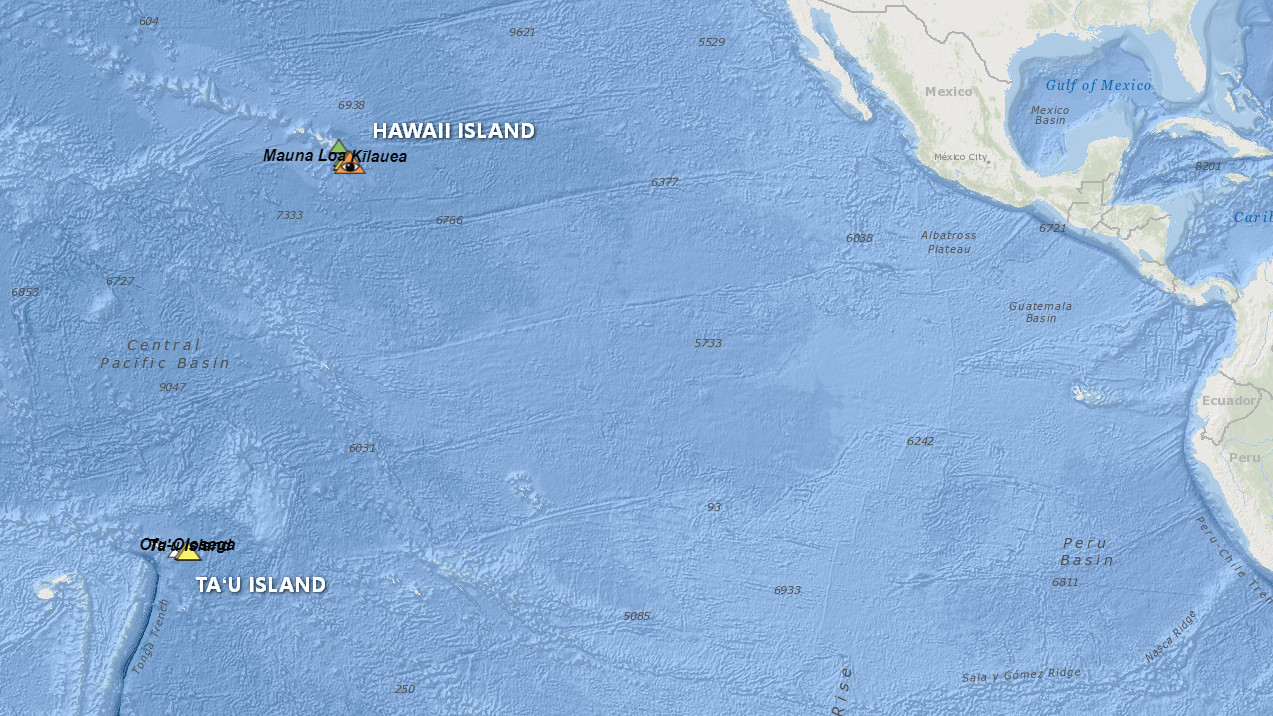 Image of the USGS interactive map showing the location of Hawaiʻi island and Taʻu island in relation to each other.

The USGS HVO is the federal entity responsible for monitoring earthquakes and volcanoes in American Samoa.

“This designation does not reflect a change in the behavior of either volcano,” HVO wrote on Friday, “it simply acknowledges that the number, size, and frequency of earthquakes being felt by people on Taʻū Island and Ofu-Olosega are well above typical background activity (a NORMAL/GREEN alert level)”

Scientists say the first reports of felt earthquakes occurred on July 26, 2022, although HVO says it first became aware of these earthquake reports on August 7. “Personal reports and instruments installed over the past week confirm the continuation of elevated earthquake activity,” HVO added. 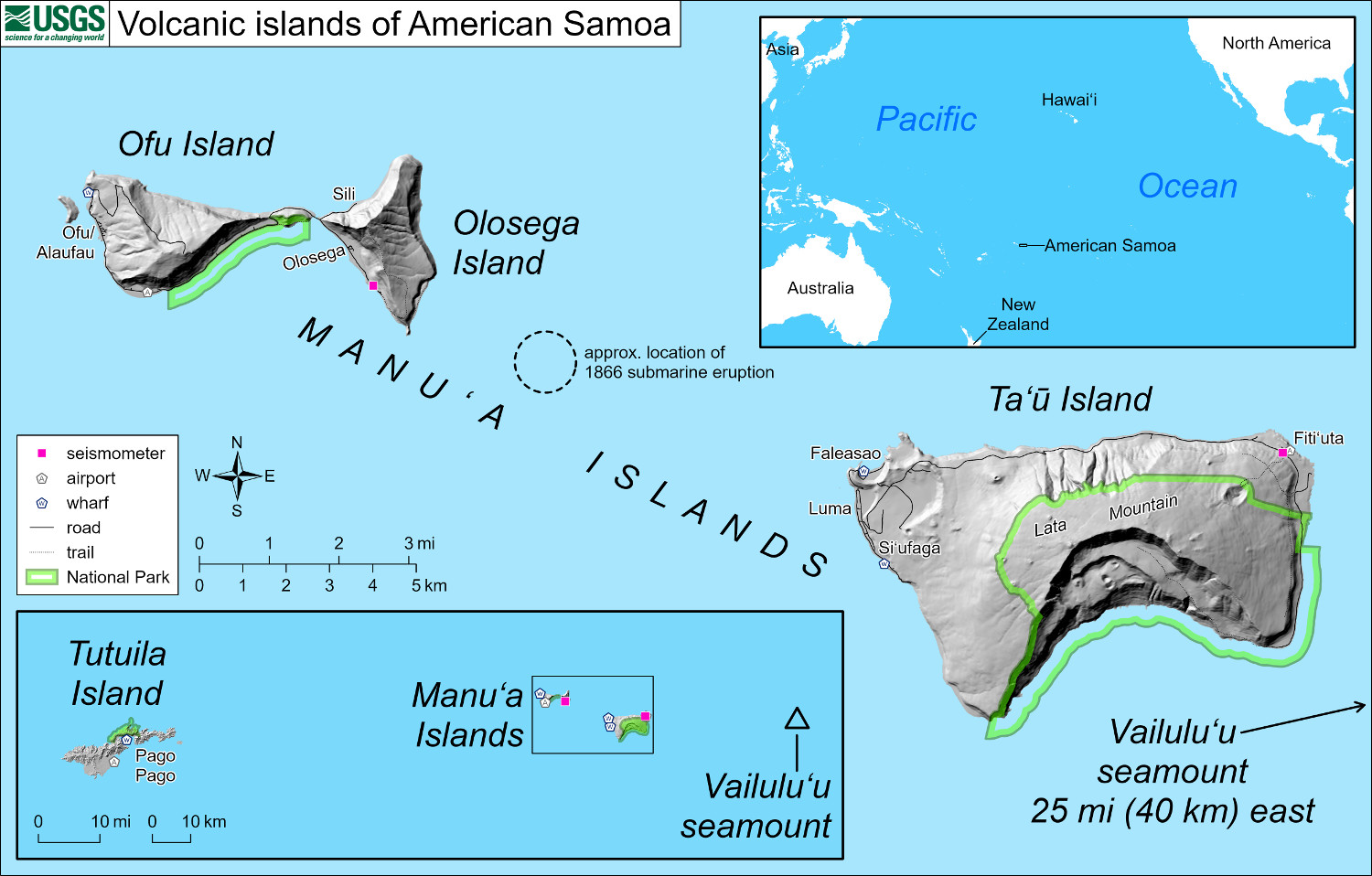 USGS: “This reference map depicts the volcanic islands of American Samoa, and specifically the Manu‘a Islands of Ofu, Olosega, and Ta‘ū. In recent days and weeks, residents of the islands have been feeling moderate earthquakes, and the Hawaiian Volcano Observatory has deployed several staff members to American Samoa to help monitor the unrest. Two seismometers (black squares on map) have thus far been deployed on Ta‘ū and Olosega, the data from which suggest that the earthquakes are occurring in the vicinity of Ta‘ū. The last volcanic eruption in this area was a submarine eruption in 1866 (approximate location indicated by dashed circle). Another volcano, Vailuluu‘u, sits 25 miles (40 kilometers) east of Ta‘ū and 2,000 feet (600 meters) below sea level; it has erupted as recently as 2003. Tutuila Island, the main population center of American Samoa, is approximately 60 miles (100 kilometers) west of the Manu‘a Islands.”

The situation is the subject of this week’s Volcano Watch article, written by USGS scientists and affiliates:

Earthquakes have been felt since late July in the Manuʻa Islands of American Samoa in the South Pacific. These earthquakes are likely associated with magmatic activity beneath the islands. The USGS Hawaiian Volcano Observatory (HVO) is working closely with federal partners, American Samoan officials, and local residents to better understand the source and potential hazard implications.

Volcanoes in American Samoa are similar to those in Hawaii, with the Pacific Plate moving to the northwest over the Samoa hotspot and building submarine volcanoes that eventually emerge from the ocean as islands. These islands are the tops of large basaltic shield volcanoes rising over 15,000 feet (4,500 m) from the surrounding seafloor. 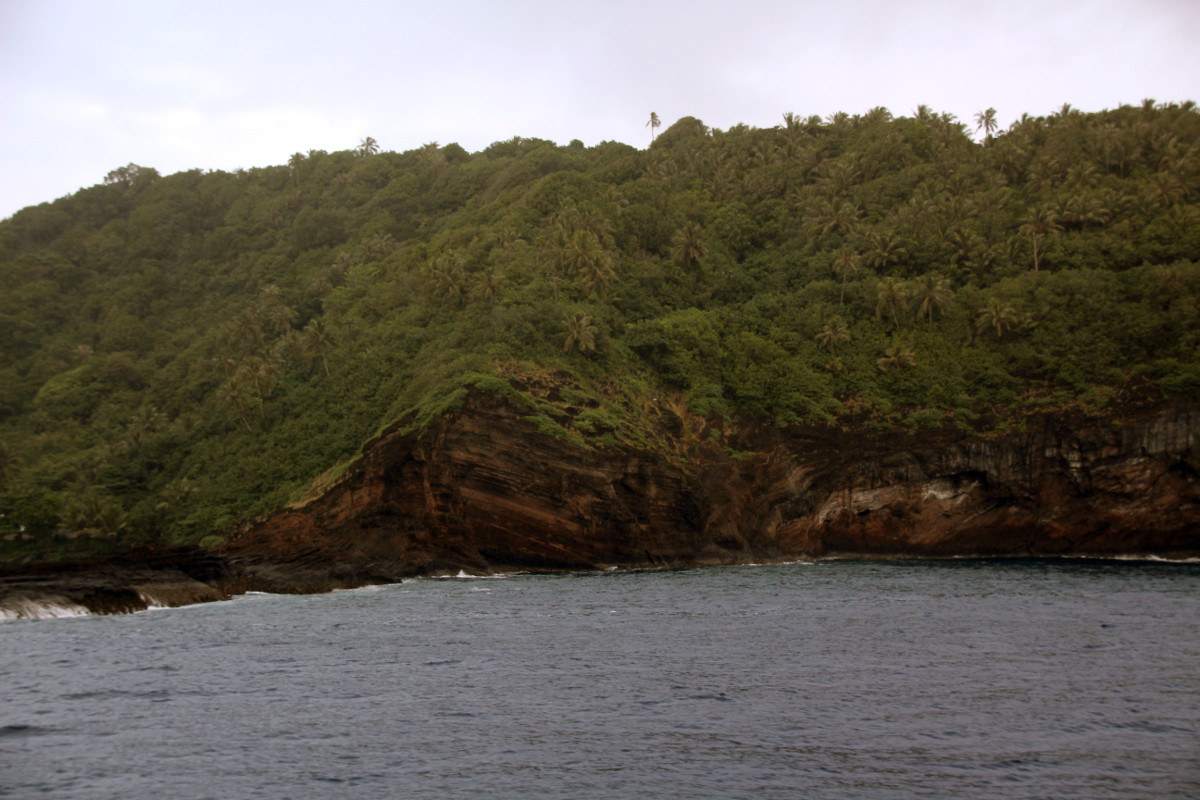 USGS: “View of part of the tuff cone which contains both Faleāsao village and Faleasao Harbor from the northwest part of Taʻū Island, American Samoa. A tuff cone can form when magma and water interact at shallow depths, causing localized explosions. The layers exposed within the unvegetated cliff are the result of individual explosions during the eruption that created this tuff cone. The age of the eruption which formed this tuff cone is unknown. After the eruption, ocean waves and currents eroded (removed) the northern side of the tuff cone, leading to the creation of Faleasao Harbor. Faleāsao village is also located within the tuff cone.” (USGS photo by N. Deligne)

The Samoan hotspot is currently centered on Vailuluʻu seamount, which has had several historic eruptions. The Manuʻa Islands of Ofu, Olosega, and Ta‘ū—along with the main island of Tutuila—are all considered potentially active as they have erupted within the last 10,000 years.

Tutuila is the most populous island in American Samoa and is where the capital city of Pago Pago is located. The youngest dated eruption in American Samoa on land is on Tutuila and occurred approximately 1400–1700 years ago. However, numerous submarine eruptions have occurred more recently at volcanoes east of Tutuila.

The Manu‘a Islands, located about 60 miles (97 km) east of Tutuila, include Ofu, Olosega and Taʻū. Ofu and Olosega, separated by the narrow Asaga Straight, are the tops of two shield volcanoes. Taʻū, the largest of the Manuʻa group, is a shield volcano with rift zones to the northeast and northwest. In 1866, a submarine eruption formed a cone between Taʻū and Olosega.

The Vailuluʻu seamount, the youngest Samoan volcano, is located about 25 miles (40 km) east of Taʻū. It is a submarine volcano with a summit about 2,000 feet (600 m) below sea level. Vailuluʻu has erupted multiple times over the past 50 years. During the past twenty years, a young cone has grown within the summit caldera.

Based on felt reports and historic activity, Taʻū and Vailuluʻu were identified as likely possible sources for the recent earthquakes. It was initially difficult to confirm the source because, until a few days ago, there were no seismometers close enough to determine the distance to the source of the earthquakes.

The latest data, obtained from rapidly deployed microseismometers, indicate that the source is closer to Taʻū than Olosega and not close to Vailuluʻu. The earthquake swarm is most likely due to magma movement beneath the volcanoes and not tectonic faulting. 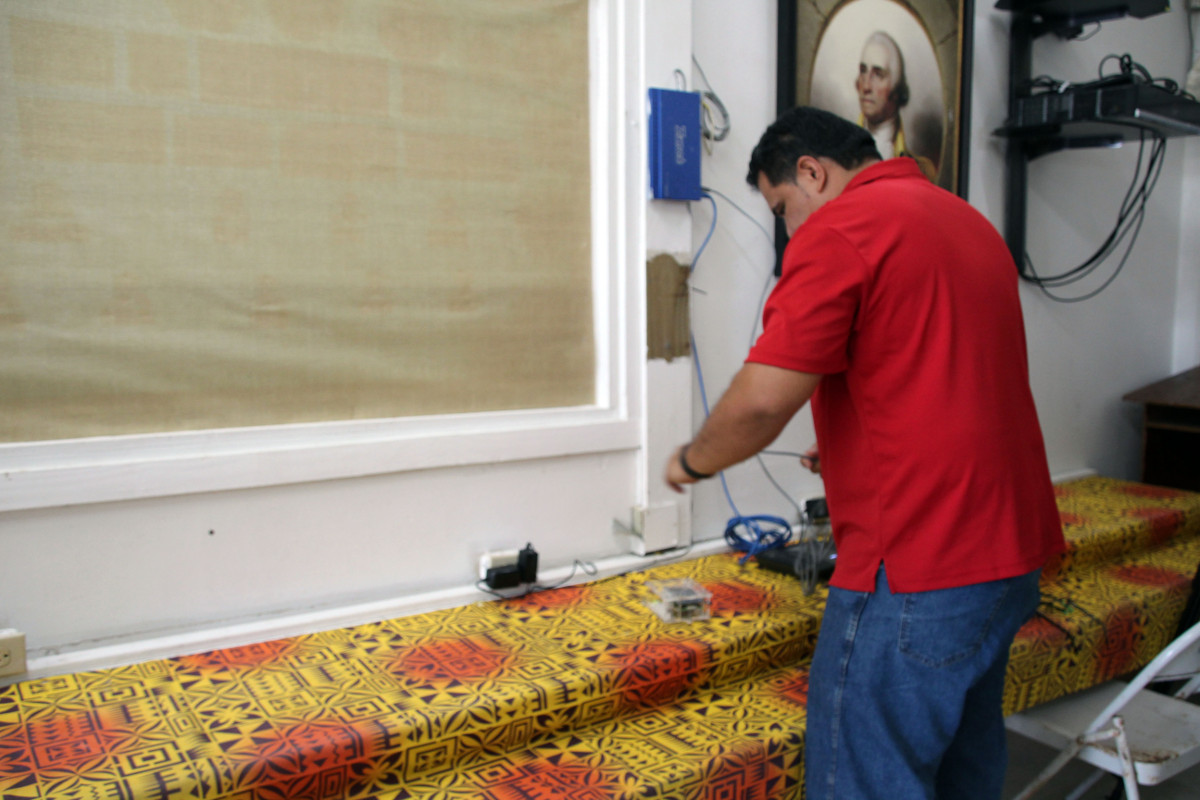 USGS: “A Raspberry Shake seismometer was installed at Fitiʻuta Elementary School on Taʻū Island on August 13, 2022, to provide initial data on the swarm of earthquakes that started on the Manuʻa Islands around July 26, 2022. The equipment was provided by the US Geological Survey, and installation was completed with the support of the American Samoa office of the NOAA National Weather Service.” (USGS photo by N. Deligne)

HVO staff traveled to American Samoa on August 11 to consult with federal partners, local officials and residents. They are working with NWS staff and local residents to install volcano-monitoring equipment. Additional HVO scientists and equipment will arrive in American Samoa later this week.

It is unclear if this unrest will escalate to a volcanic eruption. If an eruption does occur, it will most likely include slow-moving lava flows or low-level explosions that are localized to a small area. Other hazards could include volcanic gases, ground shaking, and local tsunami. An eruption like Hunga Tonga–Hunga Ha’apai in Tonga earlier this year is extremely unlikely as it is a different type of volcano. Volcanoes in Tonga erupt much more explosively than ones in American Samoa and Hawaii.

HVO would like to acknowledge every agency and every individual person who has contributed to this response. We especially thank Manuʻa island residents for their observations. Mahalo and Fa’afetai!