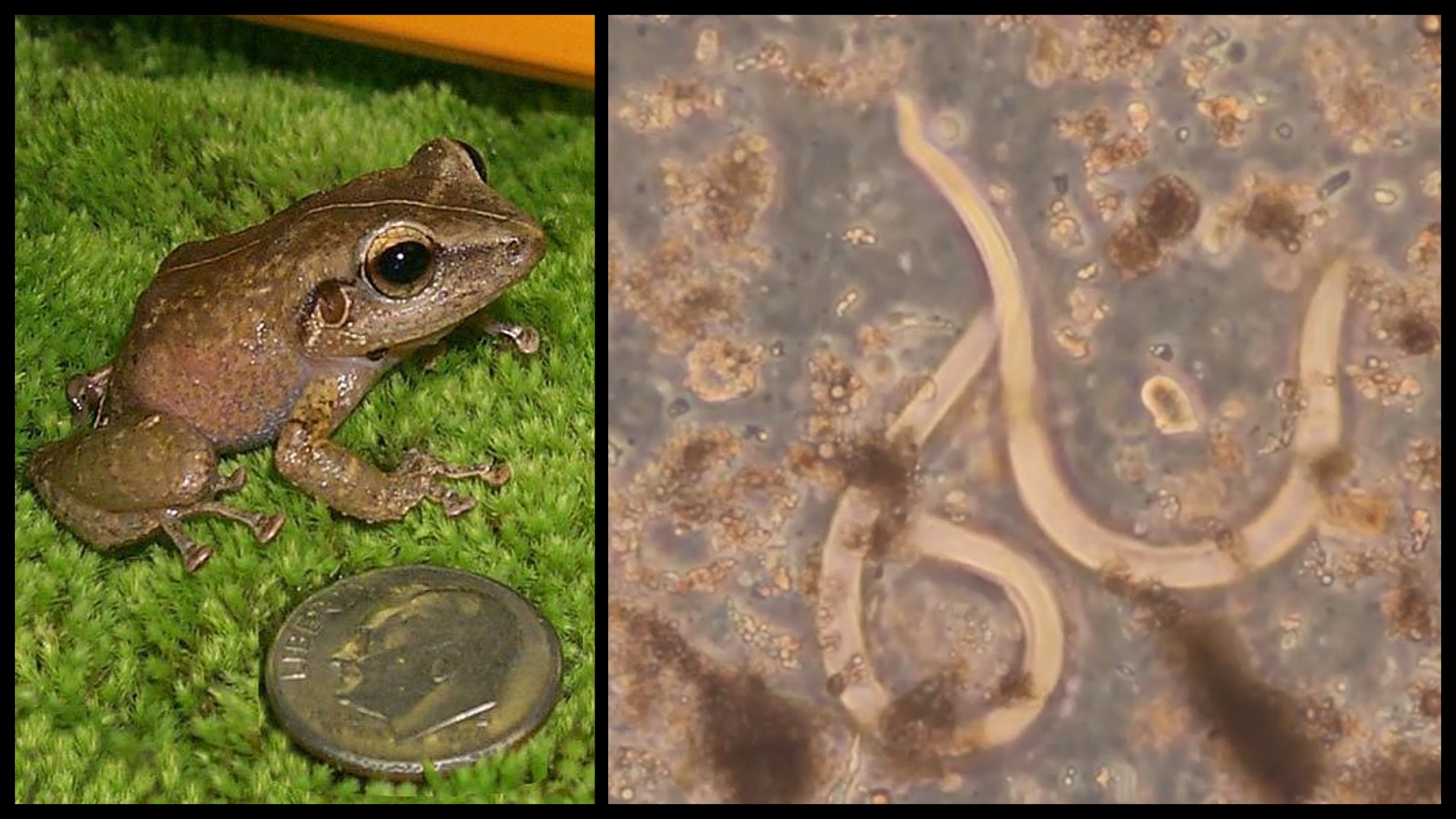 (LEFT) Puerto Rican coqui frog, introduced to Hawaii, where it has been shown to be a paratenic host of the rat lungworm parasite. Image courtesy U.S. Department of Agriculture. (RIGHT) Image courtesy University of Hawaii DKICP

HILO, Hawaiʻi - New research shows that slugs and snails are not the only creatures that have been transmitting Angiostrongylus cantonensis. 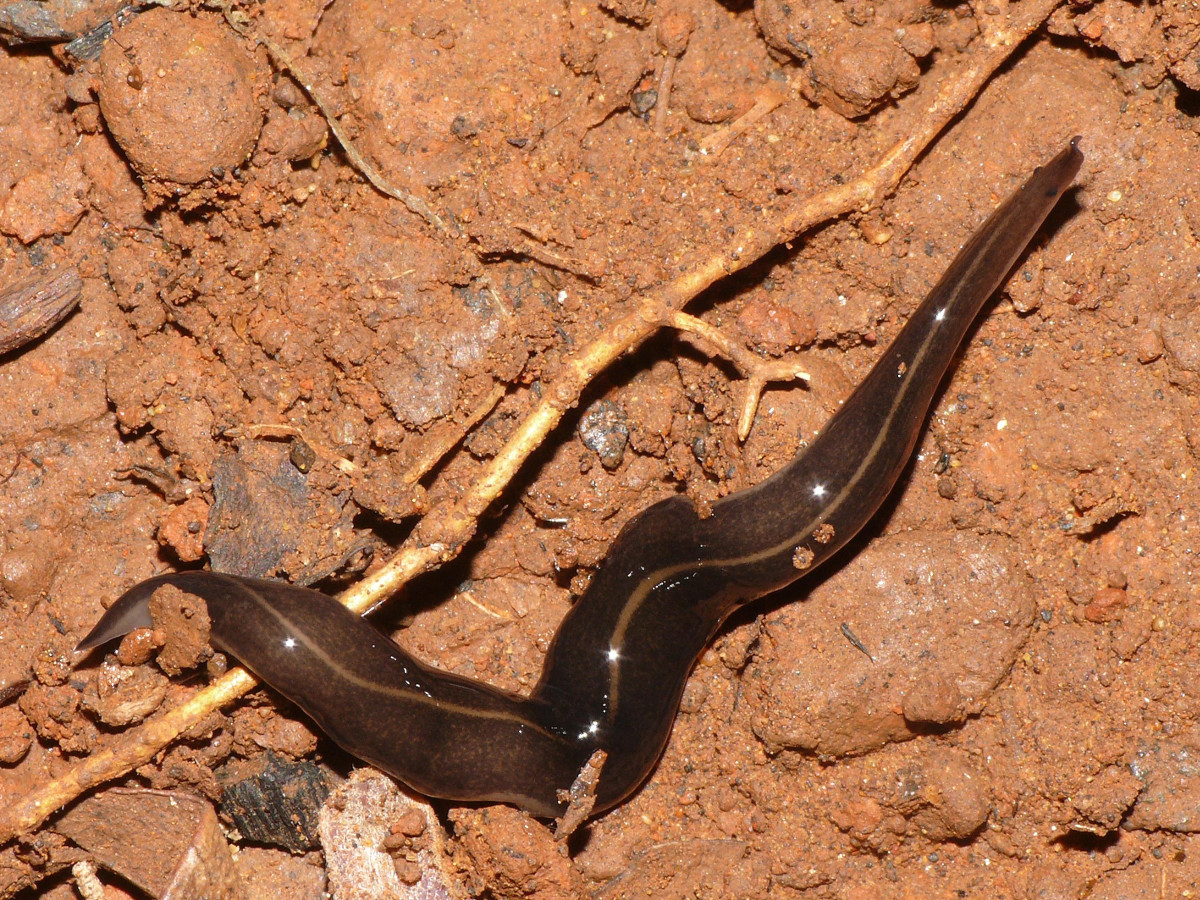 Platydemus manokwari, an introduced flatworm present in Hawaiʻi, which can act as a paratenic host of the rat lungworm parasite and that has been implicated in causing rat lungworm disease in Okinawa. (Photo credit: Shinji Sugiura)

While many people know that rat lungworm disease can be spread to humans by slugs and snails, new research shows those creatures are not the only ones that have been transmitting the illness.

Researchers from the University of Hawaiʻi at Mānoa and the University of London, UK, combed through nearly 140 scientific studies published between 1962–2022 and found 32 species of freshwater prawns/shrimp, crayfish, crabs, flatworms, fish, sea snakes, frogs, toads, lizards, centipedes, cattle, pigs and snails can act as carriers of the rat lungworm parasite (Angiostrongylus cantonensis). Of these, at least 13 species of prawns/shrimp, crabs, flatworms, fish, frogs, toads, lizards and centipedes have been associated with causing rat lungworm disease in humans.

Robert Cowie, senior author on the study and faculty member in UH Mānoa’s School of Ocean and Earth Science and Technology (SOEST), supervised Helena Turck, first author and graduate student at the University of London, UK, who did this study as her master’s degree thesis research, remotely during the pandemic. Professor Mark Fox of the Royal Veterinary College also collaborated on the study.

“But people can also get infected if they eat so-called paratenic hosts, which are also known as carrier hosts,” said Cowie, who is a research professor in SOEST’s Pacific Biosciences Research Center. “These are animals that become infected by eating infected snails or slugs, but in which the worms cannot develop to maturity as they do in a rat. However, in such hosts the worms become dormant, but still infective. And if one of these hosts, or part of one, is then eaten raw by a person—an accidental host—development can continue, but only up to a point.”

Rat lungworm development happens when they are in the person’s brain, where they are moving around, feeding and growing, but then the worms die without completing their life cycle. The damage to the brain and the massive inflammation that results when they die is primarily what causes the symptoms of rat lungworm disease.

“It is important to know not only that snails and slugs can transmit rat lungworm parasites to humans but also which other animals—which paratenic hosts—can also do so,” Cowie said. “The goal of the study was to pull all the information on paratenic hosts and their role in transmission of rat lungworm disease, previously scattered in diverse publications and obscure reports, together into one place and develop a global understanding of their diversity and role in disease transmission.”

Rat lungworm disease is at present confined largely to the tropics and subtropics.

Hawaiʻi is a global center of the incidence of rat lungworm disease, and it was in Hawaiʻi where the connection between the parasite and the disease was first discovered, by UH and U.S. government scientists in the early 1960s.

“Several species capable of acting as carriers (paratenic hosts) are present in Hawaiʻi, including flatworms, centipedes, coqui frogs and cane toads,” said Cowie. “While people in Hawaiʻi are unlikely to eat these animals, it is not unknown for people to do so on a dare, and become seriously ill. Elsewhere, certain paratenic hosts are eaten for supposed health reasons—frogs in Taiwan and Japan, or to enhance virility—lizards in Thailand.”

Domestic animals, especially dogs and horses, can also become infected by the rat lungworm parasite, including in Hawaiʻi, probably mostly from accidentally or deliberately eating snails or slugs.

Other notable regions where rat lungworm disease is prevalent include South and Southeast Asia, where it probably originated, southern China, Taiwan, southern Japan, various Pacific islands and archipelagos, Brazil, the Caribbean islands and Australia. The parasite has also been reported from the Canary Islands and Balearic Islands of Spain, as well as southeastern parts of the U.S. Climate change may lead to its further spread into currently more temperate regions.

There are several things people can do to prevent infection by rat lungworm.

“Awareness of which species may harbor the parasite is critically important both in Hawaiʻi and more widely,” said Cowie. “These animals should not be consumed raw. Additionally, wash all fruits and vegetables well under running water and inspect them for slugs, snails and possible other hosts such as flatworms so as to avoid inadvertently eating them or parts of them.”