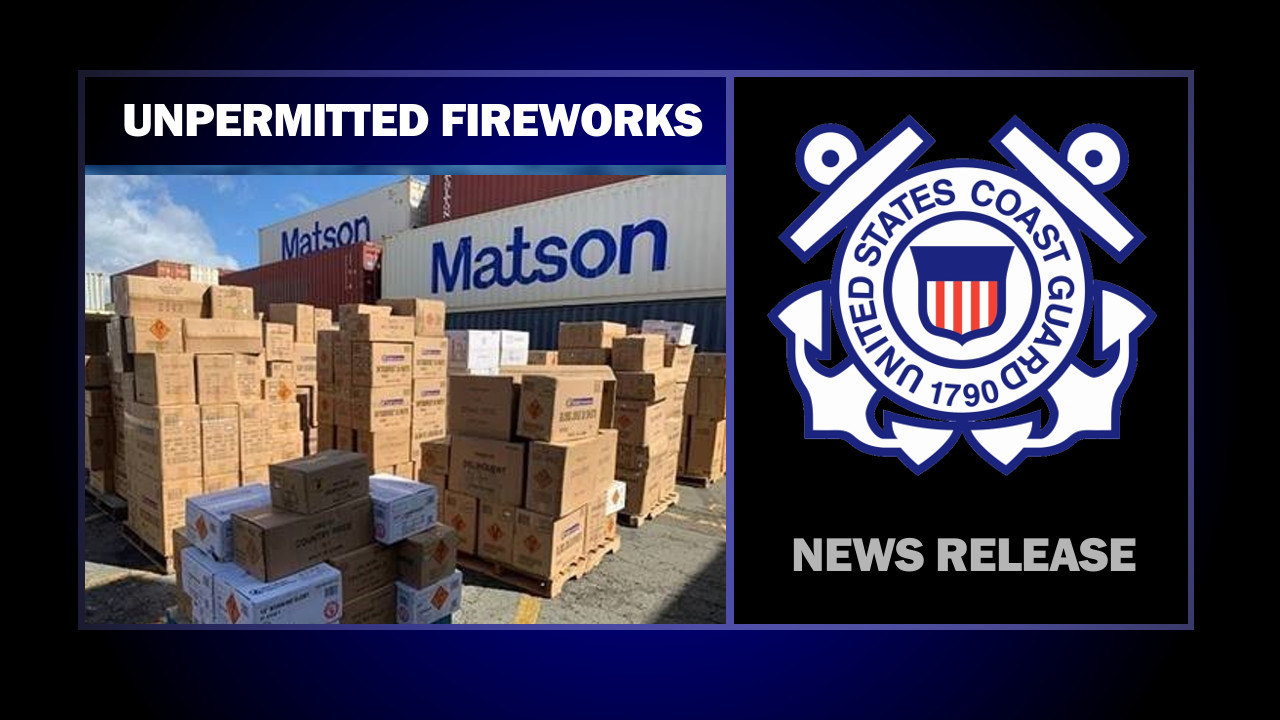 Graphic by BIVN with photo by the USCG

HONOLULU, Hawaiʻi - The shipment of 13,449 pounds of unpermitted fireworks was sent back to the mainland and then destroyed, the Coast Guard says.

MASFO’s is a joint surge operation held regularly with local partner agencies to leverage synergies between different agencies’ capabilities while inspecting a large number of containers coming into the Port of Honolulu.

“The Coast Guard regularly examines containers as they enter port to ensure the cargoes are shipped safely and legally, but a MASFO takes things to another level,” said Coast Guard Petty Officer 3rd Class Evan Treanor, the container inspector assigned to the Coast Guard’s Sector Honolulu who organized the operation. “MASFOs allow us to leverage capabilities from a variety of different agencies.”

A total of 75 inspectors from the Coast Guard, Department of Agriculture, Customs and Border Protection, Transportation Safety Administration, Honolulu Police Department, Federal Bureau of Investigation, Hawaii Department of Transportation, and others joined forces to work with shipping companies and facilities.

Teams inspected 83 hazardous and general cargo containers at five different locations across Honolulu Harbor and detained nine improperly shipped containers for issues such as structural damage and undeclared hazardous materials. They also checked 495 transportation worker credentials and completed a scan of the entire Port of Honolulu for radiation and WMDs.

Recently partner agencies identified a shipment of 13,449 pounds of unpermitted fireworks with an estimated street value of 2.7 million dollars. The fireworks were reloaded in a safe manner so that the cargo could be sent back to the mainland. The full cargo has since been properly destroyed in an appropriate disposal facility.

“In Hawaii, so many critical supply chains rely on being able to ship things by container,” said Coast Guard Petty Officer 2nd Class Vivian Gonzalez, a container inspector also assigned to the Coast Guard’s Sector Honolulu. “A MASFO helps ensure that the public can rely on these supply chains functioning without interruption.”