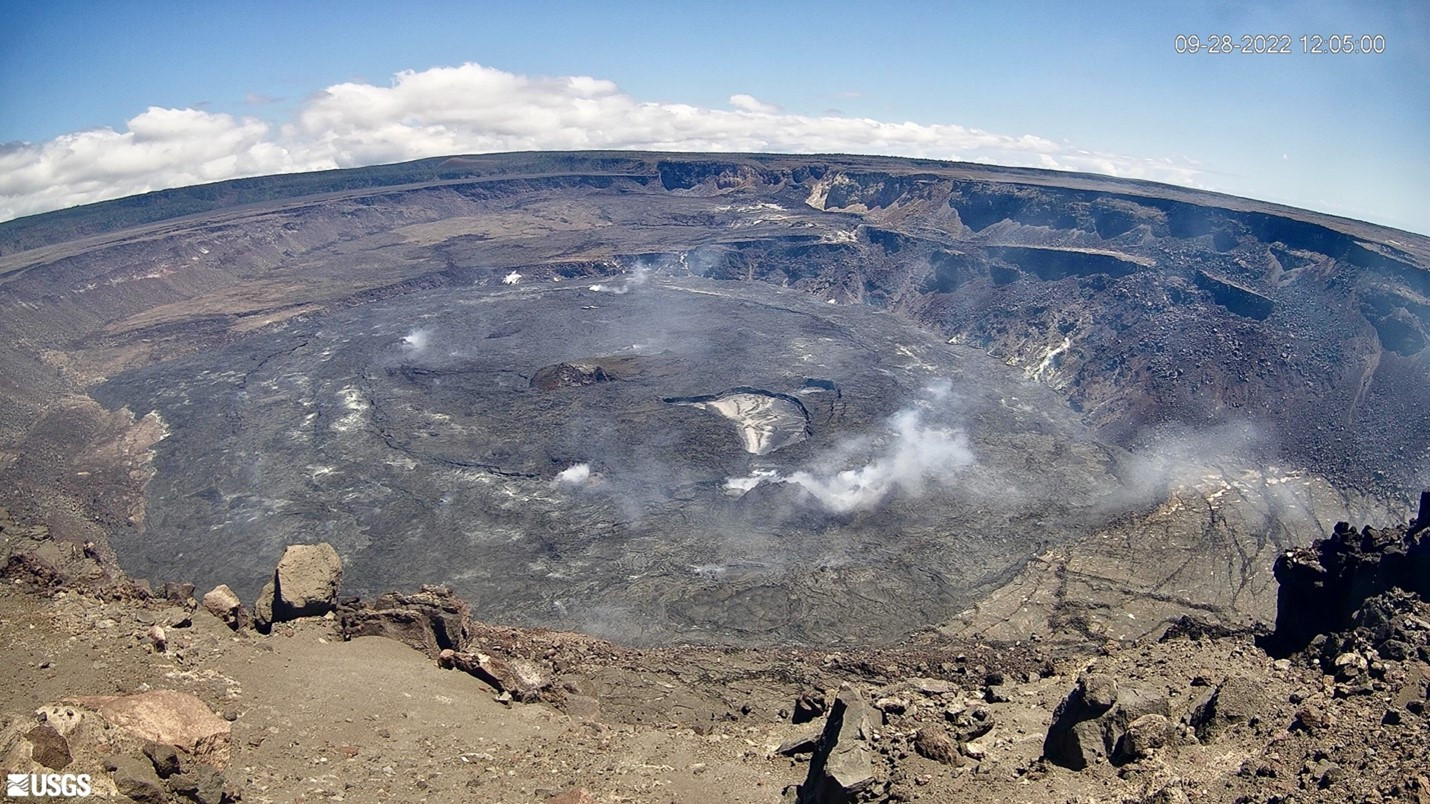 USGS: "KWcam image taken on September 27, 2022. The floor of Halemaʻumaʻu has grown in area and elevation due to the ongoing eruption in crater. The island that formed on December 20, 2020, is surrounded by younger lava flows so what is seen on the surface of Halemaʻumaʻu crater floor today represents the oldest and youngest deposits from these recent eruptions!" (USGS photo) 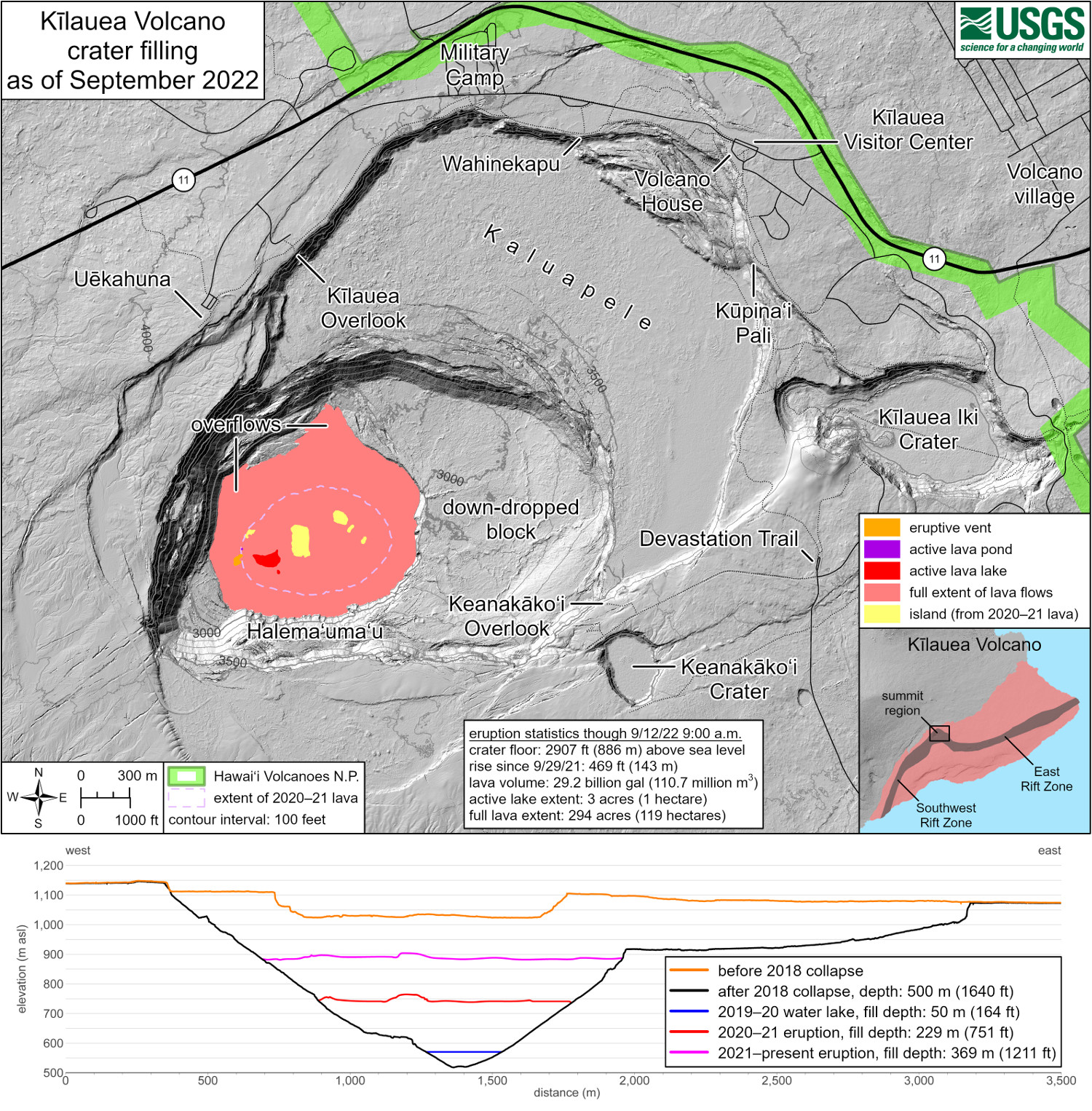 USGS: “This map of the Kīlauea summit is mostly identical to the September 13, 2022, eruption reference map, but also included here are west to east topographic profiles across the caldera. Profiles are provided for the periods before the 2018 caldera collapse (orange), shortly after the 2018 collapse (black), from mid-2021 depicting the December 2020–May 2021 eruption (red), and from this month depicting the September 2021–present eruption (pink). Also shown is the maximum depth of the 2019–20 Halema‘uma‘u water lake (blue). Elevations are expressed in meters above sea level (m asl).”

Crater filling at Kīlauea is sometimes like pouring liquid into a mug, but more often it is like injecting haupia crème into a crispy malasada.

Since December 2020, two eruptions have been filling the deep pit crater left by the 2018 subsidence of Kīlauea caldera. The first eruption started in late December 2020 and lasted 5 months. The second eruption continues and will reach one year old on September 29th. As of this week, more than 150 million cubic meters (over 39 billion gallons) of new lava have filled that pit and lifted its floor almost 370 meters (1200 feet) higher than the deepest point of 2018 subsidence.

The first eruption started on December 20, 2020, and by the new year, the lava level had risen more than 180 meters (590 feet). The last activity was observed on May 23, 2021, after lava had filled 225 meters (739 feet) of the pit. The crusted crater floor had an area of 45 hectares (111 acres) capping a volume of 41 million cubic meters (over 10 billion gallons) of mostly molten lava. The crater floor was adorned with a main island (formed in the first hours of the 2020-21 eruption), several smaller islands to the east, and a small vent cone at its west edge. The high point of the island was about 25 meters (82 feet) above the surrounding crater floor.

The crater floor continues to rise, with a few brief drops, like the top of a piston with the crust mostly intact at its top. Because the pit is shaped like a funnel, the uplifted crater floor must get larger as it moves upward.

While it may seem odd that more lava is not erupted over the crater floor to build it higher flow by flow, history shows us that this piston-like uplift from beneath the floor is a common mechanism by which Kīlauea fills its craters. Rev. Titus Coan recognized this in the 1800s when the central part of the caldera floor rose almost 60 meters (197 feet) between two of his semiannual visits. He deduced that it was uplifted from beneath because plants were undisturbed on the raised plateau.

Thomas Jaggar, founder of the Hawaiian Volcano Observatory, observed this process several times between 1916 and 1924. The crater floor would uplift at long-term rates of 0.5-1.5 meters (1.5-5 feet)/day over several months with the faster rates at the start of the uplift.

The 2020-21 and 2021-22 crater floors rose at similar rates. Daily rise rates were higher at the beginning of both recent eruptions but it’s too soon to tell whether the rates are constant or slowing.

On occasion, the 2021-22 eruption lava has covered substantial portions of the crater floor with new lava. The highest parts of the 2020-21 main island are still visible, but the island has been surrounded by about 10 meters (33 feet) of surface flows. Meanwhile, the crater floor was uplifted an additional 130 meters (427 feet) by lava beneath the crust. In other words, most of the molten lava added to Halemaʻumaʻu pit crater has not been seen by observers on the surface. Only a small fraction of it trickles out occasionally covering part of the crater floor.

Our malasada analogy breaks down when one considers what would happen if a malasada were injected with filling for more than a few seconds! The Halemaʻumaʻu crater floor will continue to rise with continued injection of lava but, sadly, the malasada would burst and become a puddle of pudding. But it would still be a good companion to your morning beverage.