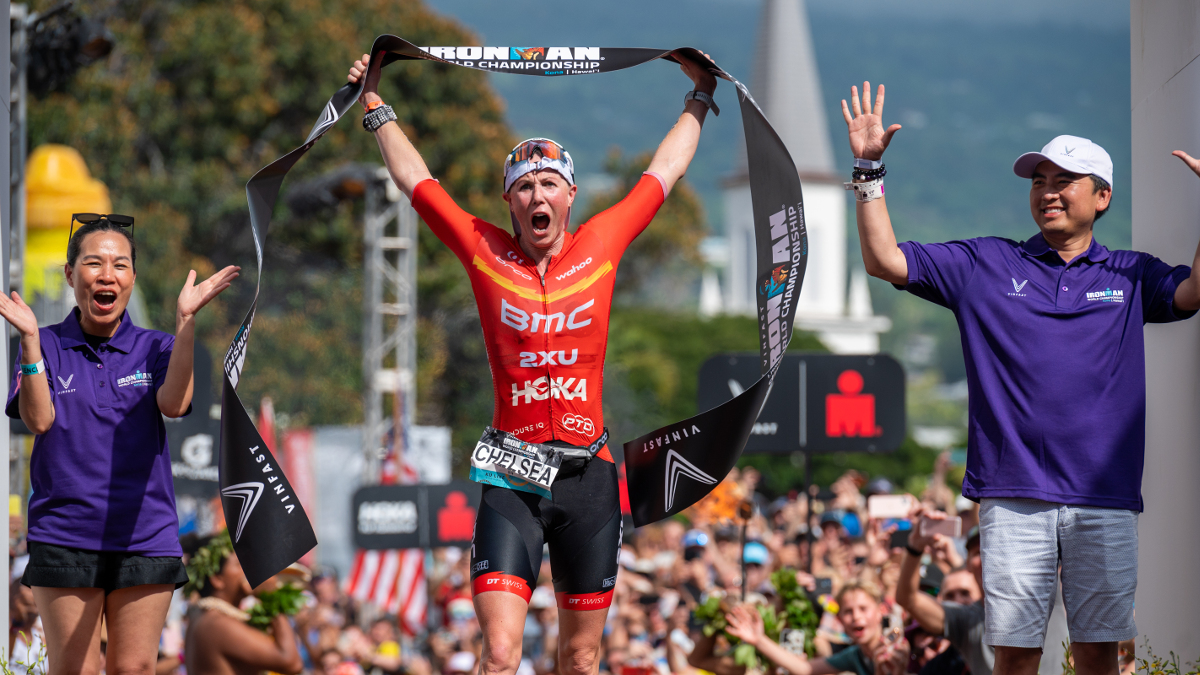 34 year-old Chelsea Sodaro from Davis, California becoming the first rookie to win the event in 15 years and the first American champion in over 25 years. (Photo by: Donald Miralle/IRONMAN) 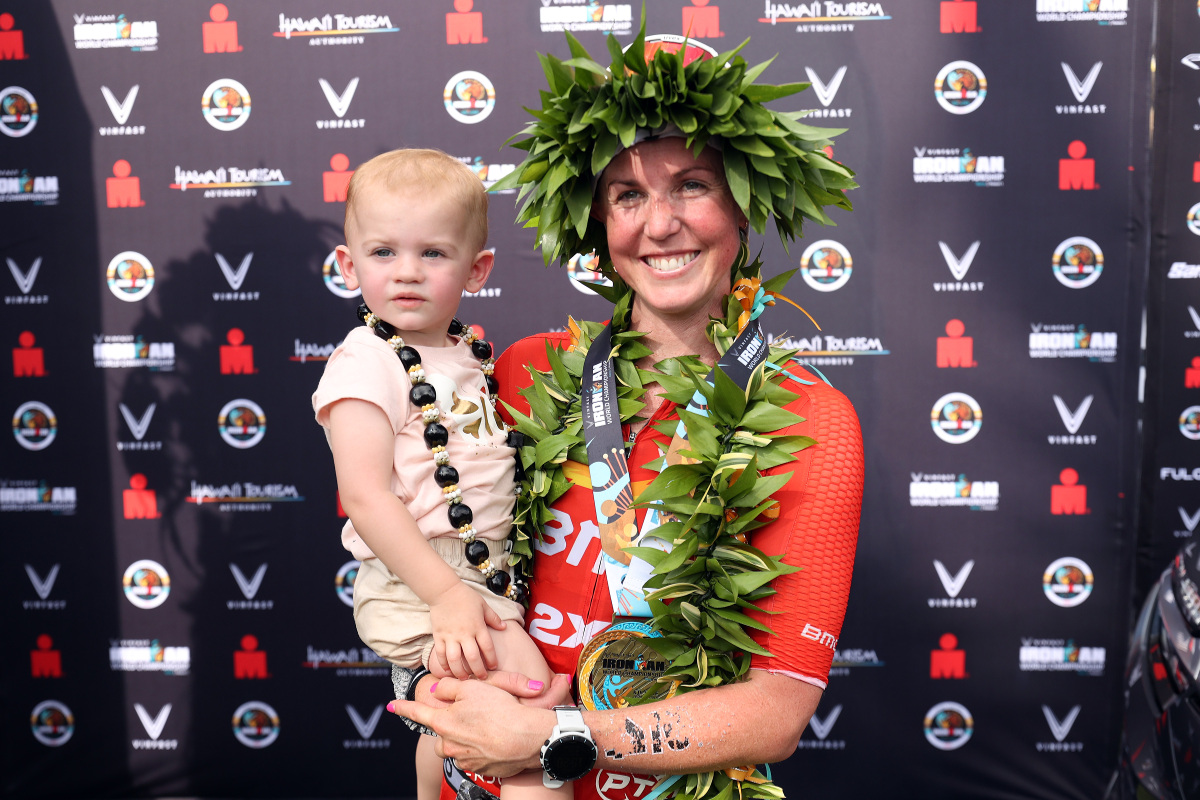 From the IRONMAN media release:

Today, in the first-ever, two-day VinFast IRONMAN World Championship, a groundbreaking, dedicated women’s professional race took centerstage in the iconic town of Kailua-Kona, Hawaiʻi. Following a three-year hiatus from Kailua-Kona, Hawaiʻi being able to host the IRONMAN World Championship, it was 34 year-old Chelsea Sodaro from Davis, California becoming the first rookie to win the event in 15 years and the first American champion in over 25 years. The last American female to win prior to Sodaro was the Queen of Kona, Paula Newby-Fraser who is from Zimbabwe but became a United States citizen prior to winning in 1996. American Karen Smyers won in 1995 breaking a streak from 1985 without a female winner from the U.S.

“I just had one of those magical days, which is really fortunate with it being my first time out here. This is my actually sixth time to the island, so while I am a rookie at this race, I know the course, I know how the conditions feel and I just focused on myself and executing my plan all day long and it came together for me,” said Chelsea Sodaro.

The 2022 VinFast IRONMAN World Championship was a historic day in both triathlon and women’s sports. On a day set to focus on women, 42 elites alongside approximately 2,500 age-group athletes began the race in the aquamarine waters of Kailua Bay, Hawaiʻi.

Fans were in for an electrifying race from the get-go thanks to a field depth that made for a tighter day of racing than seen in past years. Three-time IRONMAN World Championship runner-up, Lucy Charles Barclay (GBR) used a 50:57 swim to put a large gap on the field from the gun. Battling choppy conditions, she entered transition with a four-minute lead over Lauren Brandon (USA) who led a chase pack containing Rebecca Clarke (AUS), Pamella Oliveira (BRA), and Fenella Langridge (GBR). Sodaro then exited the water before a group that included Daniela Ryf (SWE), Laura Philipp (DEU), and 2019 defending champion Anne Haug (DEU) seven minutes behind.

Charles-Barclay stormed onto the bike course buoyed by her swim lead, with fellow Brit Fenella Langridge making short work of transition and bridging up to the front within the first 10 miles. From there, fans enjoyed dynamic pack racing not seen here before in the women’s race.

In the wake of the British bike leaders, two distinct groups formed heading out onto the 112-mile bike course.

Sitting five-minutes behind in the second chase pack, speculation was made as to when the dominating Ryf would turn her day around and make her characteristic move. As fans waited for her move. Early stand-down penalties for pre-race favorites Philipp and Sarah Crowley showed the pro women adjusting to the new flavor of a denser style of racing.

Turning at Kawaihae to begin the rolling climb to the turnaround in the small village of Hawi, Langridge and Charles-Barclay exchanged leads, riding together at the front of the race for the entirety of the 112-mile bike ride.

With a bike split of 4:36:11, Ryf looked smooth as she entered transition, taking a 17 second lead ahead of Charles-Barclay and a minute lead on Langridge. Charles-Barclay used a speedy transition to catch her longtime rival, passing Ryf within the first few hundred meters of the marathon as if to make her mark on the run early on. With the top six women off the bike within three and half minutes of each other, it was clear the competition would only heat up from here, mirroring the prototypical hot, humid Kona day.

At just 4 miles in, Sodaro’s blistering run pace made fans and commentators nervous. Sodaro soldiered on, seemingly unscathed by the Kona conditions. Once she’d passed Ryf, the American began to put on a run clinic under the blazing 90-degree Fahrenheit day. In hot pursuit of Charley Barclay, Sodaro succeeded at mile 8 and never looked back. She built her lead steadily, and by mile 19 had accrued over 5 minutes on Charles-Barclay.

Uber-runner and defending 2019 champion Haug showed no signs of slowing despite the unrelenting heat. By the 10-mile point she had moved into third position, ahead of Ryf and Langridge. But rookie Sodaro was proving herself unstoppable at the front.

Meanwhile, Haug chased Charles-Barclay, though she was ultimately unable to catch her despite running an impressive 2:57:57. Charles-Barclay would hold on to finish second with Haug coming across the line in third.

“Today definitely exceeded my expectations,” said Lucy Charles-Barclay. “At the beginning of the year when we found out I had a fracture in my hip we were told to write off the year by the specialist. A small part of me really wanted to be here, we haven’t been here for three years, so the island was calling me back.”

“I think I burned a little too much candle on the bike ride… I gave it everything I had but it was quite mind torturing to see Lucy [Charles-Barclay] all the time 30-seconds ahead of me but I could do absolutely nothing about it,” said Haug.