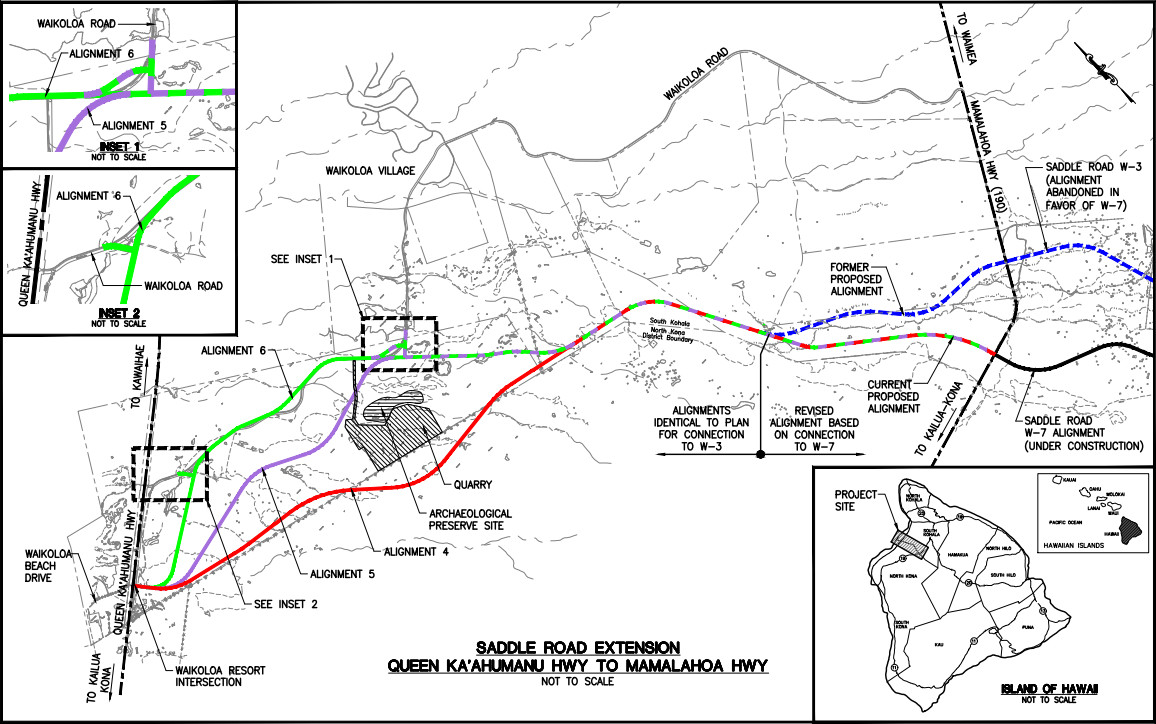 HAWAIʻI ISLAND - A required study of a proposed extension of the Daniel K. Inouye Highway between Queen Kaʻahumanu and Mamalahoa Highway has been terminated.

(BIVN) – The Federal Highway Administration is terminating its plans to prepare an Environmental Impact Statement for an extension of the Daniel K. Inouye Highway (or Saddle Road) to link between Queen Kaʻahumanu Highway and the Mamalahoa Highway in West Hawaiʻi.

The announcement, first published by the Federal Highway Administration on September 27, was also posted in The Environmental Notice on October 8. It stated:

The FHWA is issuing this notice to advise the public that it is rescinding its Notice of Intent (NOI) and will not be preparing an Environmental Impact Statement (EIS) for a proposed highway project in Hawaii County, Hawaii. A NOI to prepare an EIS was published in the Federal Register on March 18, 2014. The project intended to address the linkage between the Queen Kaahumanu Highway (State Highway 19) and the Mamalahoa Highway (State Highway 190) in the vicinity of the Daniel K. Inouye Highway (formerly Saddle Road [State Highway 200]). The purpose of the project was to further develop this inter-regional capacity and connectivity between the east and west regions on the island of Hawaii. The HDOT has determined continued preparation of the EIS for the Saddle Road Improvements (Project) is no longer feasible. The primary reason for this determination is the financial impact of the estimated right-of-way and construction costs of the Project. Therefore, the preparation of the EIS is being terminated. For further information, click on the title link above or contact Richelle Takara, Division Administrator, Federal Highway Administration, 300 Ala Moana Boulevard, Box 50206, Honolulu, Hawaii 96850, (808) 541-2700.

There were news reports, published over a year ago, that the Saddle Road extension was shelved due to lack of funding.

Five years ago, some thought the Saddle Road Extension could be finished by today. At the time, the project was estimated to cost anywhere between $63 to $74 million, depending on which alignment was chosen. Project officials held a meeting on the project in Waikoloa Village Elementary and Middle School cafeteria in May 2017.