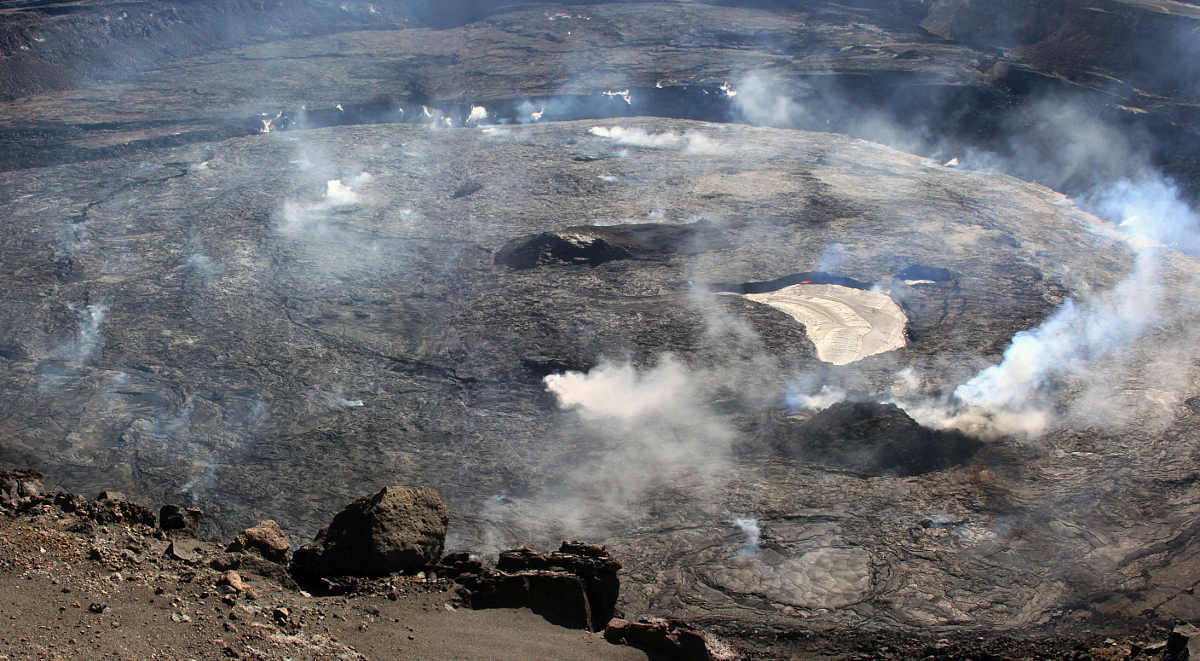 USGS: "Panoramic view of Halema‘uma‘u crater, looking east, at Kīlauea summit. Lava continues to erupt from the west vent complex into the active lava lake." (USGS photo taken by F. Trusdell on the morning of October 12, 2022)

HAWAIʻI VOLCANOES NATIONAL PARK - Although the current eruption has commonly been described as “continuous” over the past year, there have been multiple occasions when lava was not flowing. 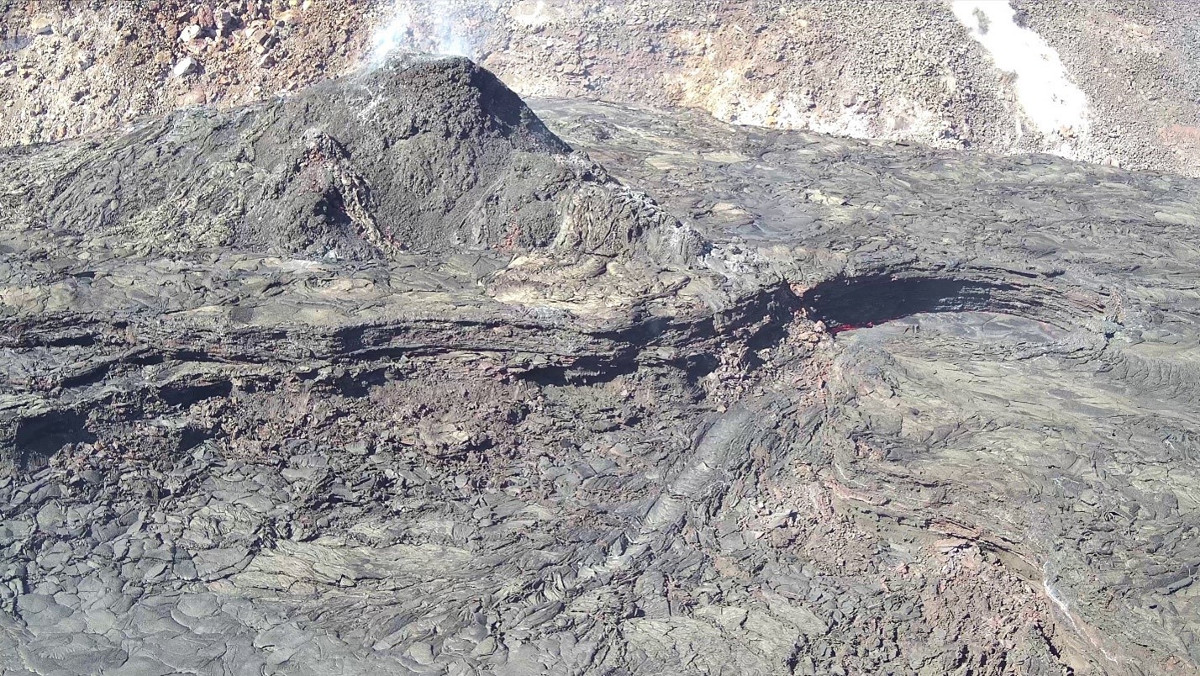 USGS: “This unoccupied aircraft system (UAS) photograph shows the western eruptive vent (upper left) and lava pond (center right) within Halemaʻumaʻu crater during an eruptive pause on January 28, 2022. The pond hosts the only active lava in this view. The western impounding walls of the drained lava lake are visible from center to lower left of this image.” (USGS photo)

The ongoing summit eruption at Kīlauea volcano turned 1 year old on September 29, 2022. The past year’s activity has commonly been described as “continuous” effusion of lava within Halemaʻumaʻu crater. Although this has been mostly true—especially in recent months—there have been multiple occasions when lava was not flowing. What happened at those times, and why?

During the late fall and winter of 2021–2022, the eruption would episodically pause for periods lasting from hours to days. These pauses typically occurred in conjunction with deflation-inflation (DI) events in the summit magma reservoir, as recorded by USGS Hawaiian Volcano Observatory (HVO) tiltmeters in the region.

As the summit deflated the surface of the active lava lake would drop, eventually settling about 10 meters below the rim of the surrounding levees. At this point the lava would crust over, except for a small active pond near the western eruptive vent. Notably, during each pause there was also a substantial reduction in sulfur dioxide (SO2) emissions, suggesting that little to no magma was rising in the shallow conduit below the eruptive vent.

When the summit reinflated to a critical point, lava would flow from this pond to slowly refill the lava lake. Surges of lava followed many of the pauses and often caused overflows from the active lake onto large sections of the surrounding crater floor. Breakouts of lava from around the circumference of the crater floor were also common during eruption restarts. These events were responsible for significantly thickening the crust making up the current crater floor.

Why did these pauses occur? HVO scientists are still exploring this question. The pauses were clearly associated with DI events during this period. However, many other DI events occurred both before and after the period of pauses last fall and winter. The DI events associated with pauses were not particularly large and some were tiny compared to many of those that preceded and followed the period of pauses. It remains curious why some of these DI events shut down the eruption while others caused only minor fluctuations in activity.

The last pause to date occurred on March 18, and since then there has been truly (or mostly truly) continuous lava effusion. The crater floor has also continued to rise due to lava spreading from the active lake to areas beneath the crust. This “endogenous” injection of lava lifts the crater floor, like the inflation of an air mattress.

The eruptive activity at Kīlauea summit was disrupted one more time on September 20, when a swarm of several dozen earthquakes occurred below Halemaʻumaʻu. Simultaneously, tiltmeters measured rapid inflation in the summit region. Around 4:30 p.m. webcams recorded the higher central part of the crater floor dropping by several meters at the same time breakouts occurred along the lower margins of the crater floor. The earthquakes and inflationary tilt soon tailed off followed by the return of steady activity within the lava lake.

Initial observations suggested that the conduit to the eruptive vent may have experienced a structural failure—allowing dense lava below the crater floor to infiltrate the conduit, causing it to clog. Geophysical data from this event and the following days tell a very different story. Interferometric Synthetic Aperture Radar (InSAR) data from satellites show that an area around the west side of Halemaʻumaʻu crater uplifted by a couple centimeters around September 20. Modeling of the seismicity and deformation by HVO scientists indicates that a horizontal body of magma, called a sill, may have been intruded between old layers of lava below the crater that day.

The fact that the summit inflated on September 20, but never deflated in association with the new lava breakouts, is consistent with the accumulation of magma somewhere below ground. The drop of the crater floor suggests the possibility that some lava may have drained back down the conduit to form part of the sill as well.

As data collection continues, we hope to learn even more about the volcanic processes that influence and control eruptive pauses and sill formation at Kīlauea volcano.